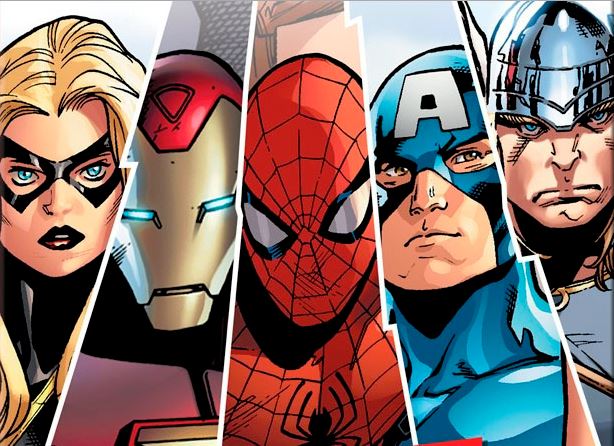 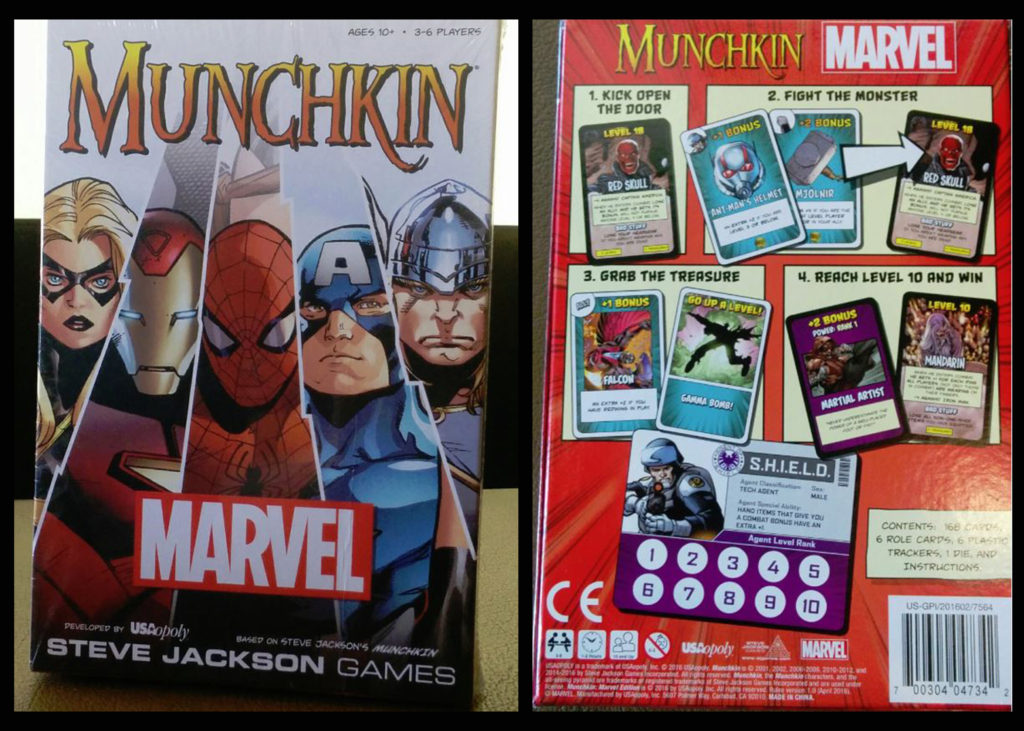 Lately, it’s been a great time to be a Marvel fan. Not only are we treated to such an awesome movie experience care of the Marvel Cinematic Universe (MCU) and Deadpool, but we’ve also had things like the Daredevil TV Series, Marvel Legendary, Marvel Future Fight, and many more! Now, we get another source of Marvel awesomeness and it comes from a crossover you probably weren’t expecting. Let’s take a look at Munchkin: Marvel Edition in today’s unboxing session!

Let’s check out the components one by one: 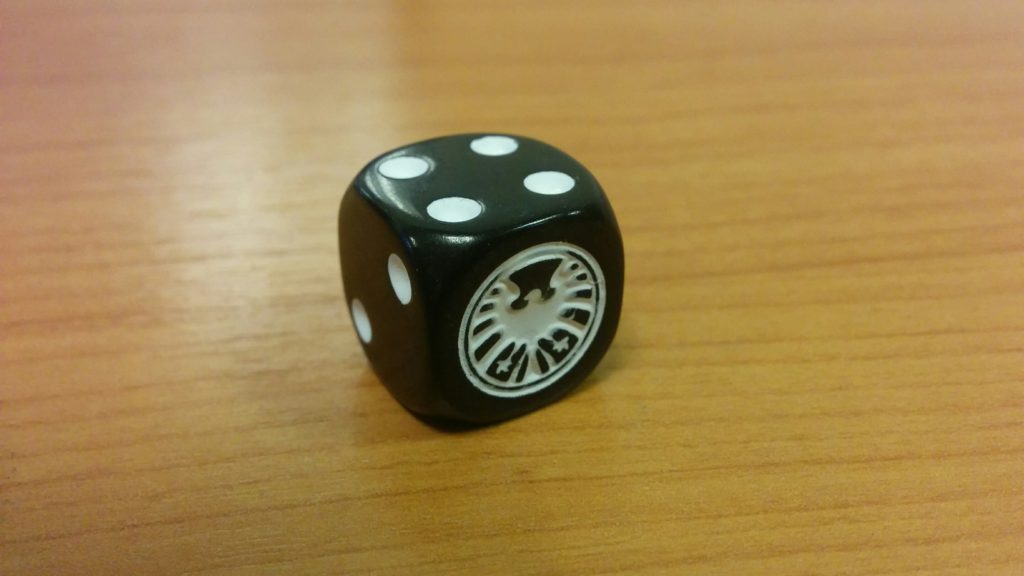 Typically of Munckin games, you get a die to be used for certain cards and for running away from a lost battle. The die this set comes with may be simple but I found the S.H.I.E.L.D. Insignia (as the ONE face) to be a nice touch. 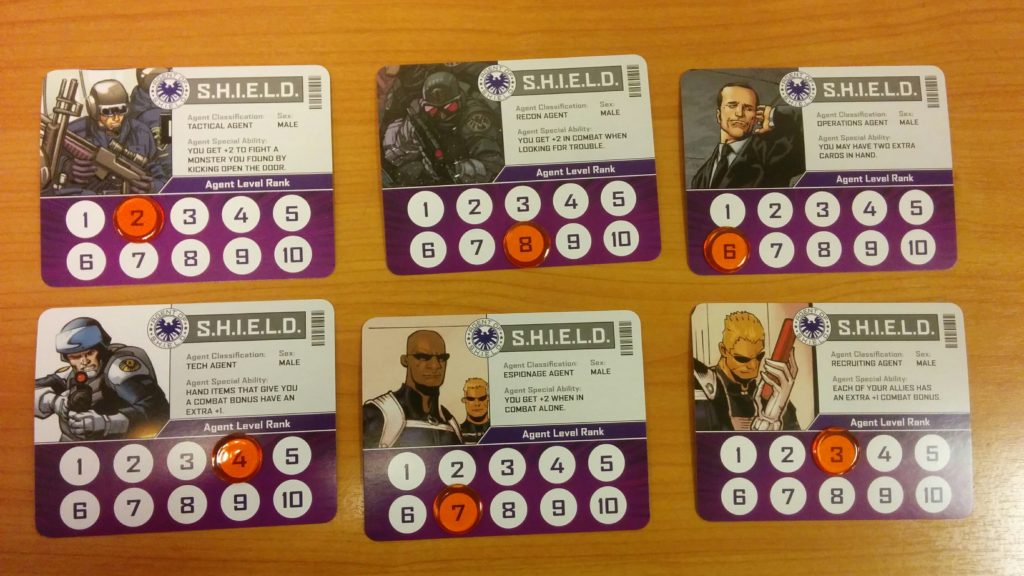 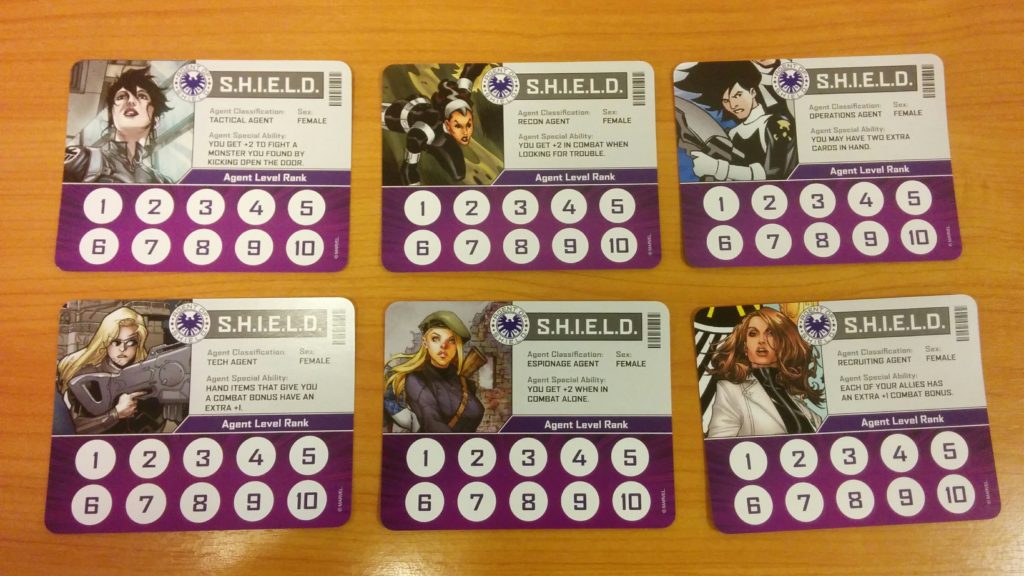 Check out the Role Cards! There are 6 of them and are double-sided for gender purposes. You deal these at random to each player (or choose, FINE. I’m not your mother) and each one comes with their own special abilities. Now, it is worth mentioning that these cards will also take the place of your central leveling board. The game comes with orange discs that will keep track of your current levels. Whoever reaches Level 10 first wins and is deemed the new Director of S.H.I.E.L.D..

Next up, the game comes with 2 main decks – the DOOR DECK and the TREASURE DECK. Let’s take a look at what loot the Treasure Deck has in-store for us. The Treasure Deck is divided into 4 main types:

ALLIES – There are 15 allies that you can draw from the deck. If you’ve noticed, they’re all Avengers and/or S.H.I.E.L.D heroes. You can only have one ally at a time and can also be sacrificed to help you run away safely from a lost battle. 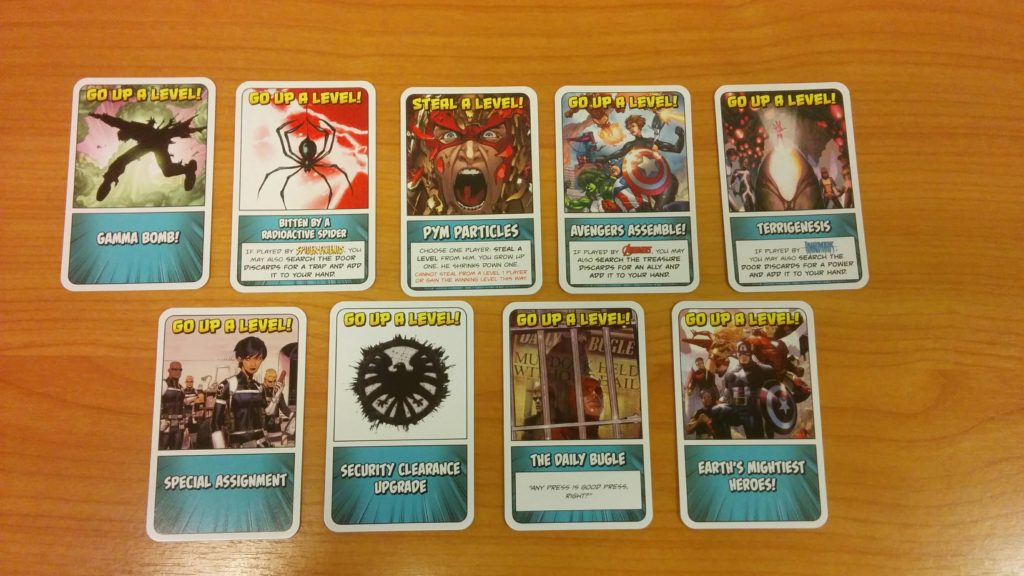 LEVEL-UP CARDS – 9 cards that are all about straight-up gaining one Level. There are some cards though that have a caveat – there’s a card that steals a Level from an opponent while 3 other cards allow you to gain news cards along with the Level. 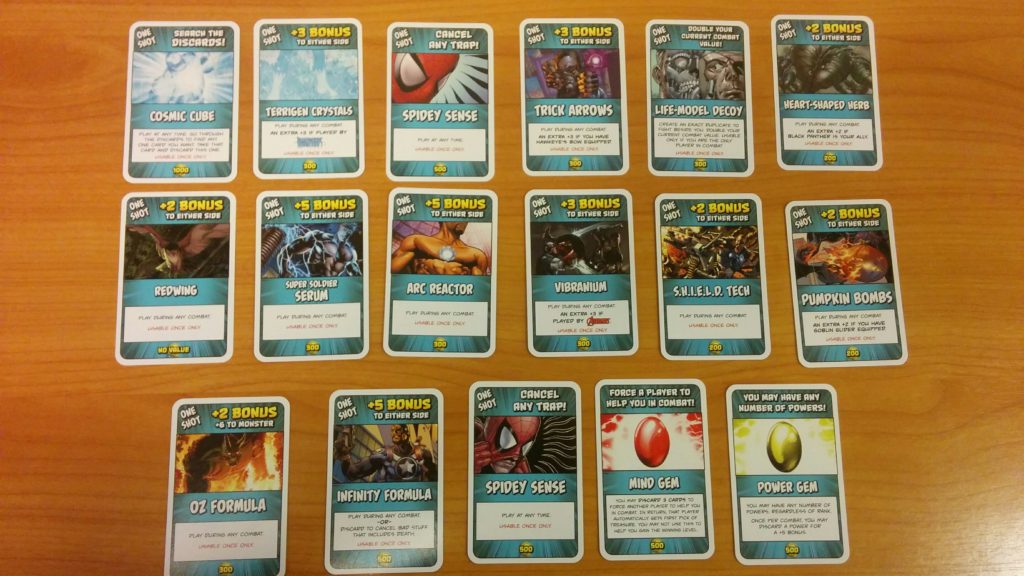 ONE-SHOT TREASURES – 15 cards of the Treasure Deck are one-time-use-only cards. These consumable cards can give you that opportune effect to either win a battle or screw over someone else. Some one-shots are even MORE than just increases/decreases to battle values. Be sure to read the cards closely to see how to make the most of these cards. I DID lump two non-ONE-SHOT cards to this set — the ever-iconic INFINITY GEMS… well, two of them at least. The Mind Gem and Power Gem makes an appearance here and are permanent items that can help you out, for a price.

EQUIPMENTS AND WEAPONS – Aww yisss… Look at all that cool gear you can get from the treasure deck. A total of 28 cards will either give you a weapon or an equipment that you can use to bolster your abilities. Do remember that there are limits. You can only have a maximum of 1 headgear, 1 armor, and one 1 footgear as active equipment. You can also only have either 2 active 1-handed weapons OR 1 active 2-handed weapon. 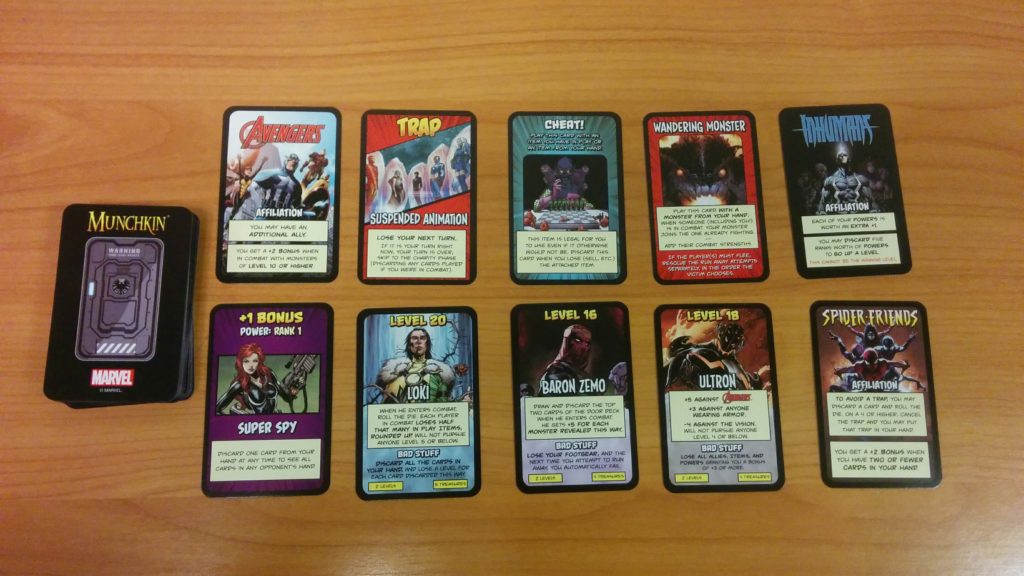 The Door Deck, as expected is full of surprises with 8 kinds of main card types. Let’s go over them briefly one by one.

Last thing we’ll look at is the INSIDE OF THE BOX. 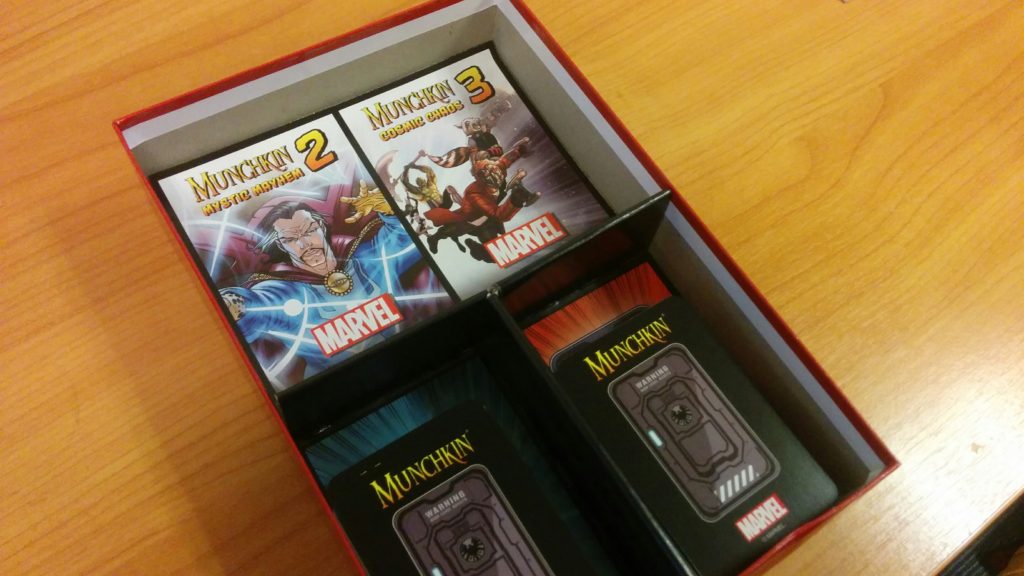 The only reason I’m showing this is because, upon closer inspection of the box, we noticed that they’ve plugged the 2 upcoming expansions for the game! What other goodies will those expansions have?

Just a small observation. Munchkin, who usually has a very humorous tone to their games, seems to be all serious in this specific expansion. It’s something different, definitely but I’m guessing that they’re trying a different approach with Marvel… seeing as how there are already follow-up expansions on the way. The fun with this game is definitely going to come from playing with such huge icons in the Marvel Universe. Just looking over the cards made the Marvel fan in me burst up with glee. So yes, while it’s different, it’s definitely something I want to try.

That’s it for this unboxing. Once again, we’d like to thank Gaming Library for being the first to bring in this awesome game into the Philippines and for sending us this review copy! If you want to get your hands on the game RIGHT NOW (and you live in the PH), you can CLICK HERE to purchase one of the limited stocks they have available! Orders will be on a first-come first-served basis. Till next time, true believers! Keep on gaming!