[Cult of the New] Pandemic: Reign of Cthulhu Overview and Review 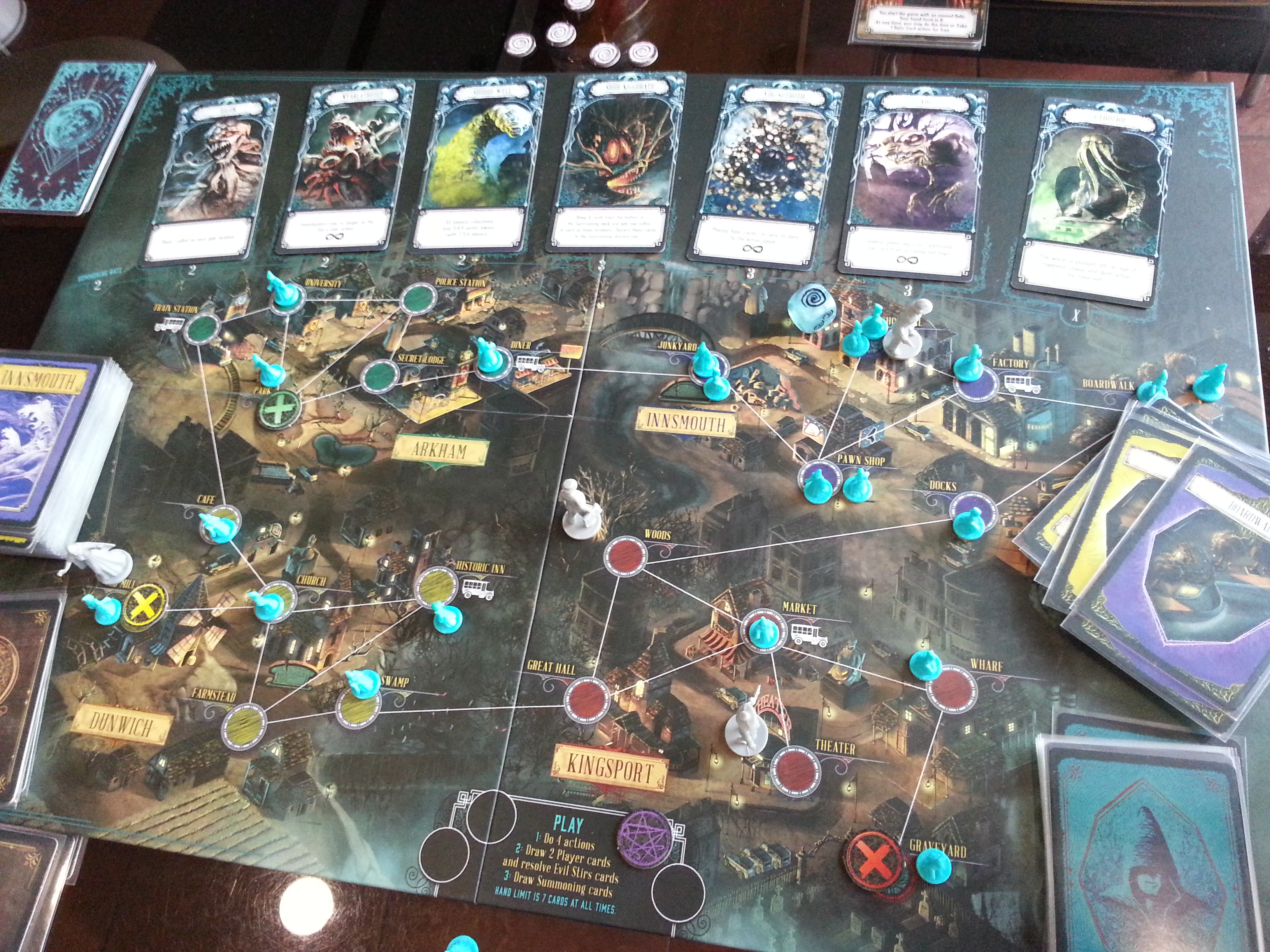 Since its announcement and preview last February, Matt Leacock and Chuck D. Yager‘s latest incarnation of his most popular title has been met with much excitement and anticipation. Finally, after months of waiting, we were able to get a copy to review at the Gaming Library Cthulhu Rising Pre-Release Event of Pandemic: Reign of Cthulhu. Does it live up to the hype? Will it warrant a space in your shelf alongside Pandemic? Can there ever be enough Cthulhu games? (Answer: apparently not). In any case read on! 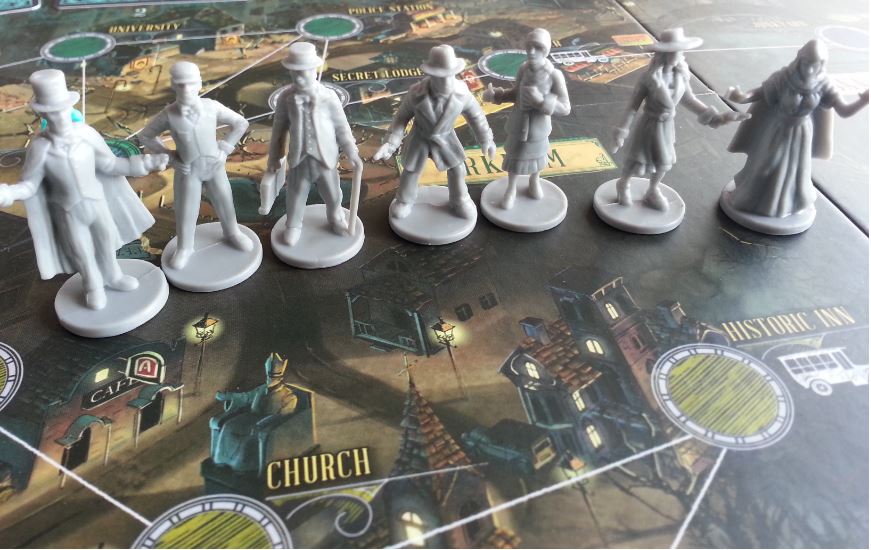 In Pandemic: Reign of Cthulhu (PRoC), you and up to 3 other investigators are working together to stop the great old ones; ancient horrors that are based on H.P. Lovecraft’s Cthulhu mythos. To those uninitiated, this is not your typical, in-your-face startle-fest that you would normally expect in most scary movies. Rather, the author’s intent here is more of you encountering unimaginable and “unspeakable horrors”- otherworldly beings that cannot be comprehended even with the soundest of minds… That in trying to understand its existence, you might go insane in the process. 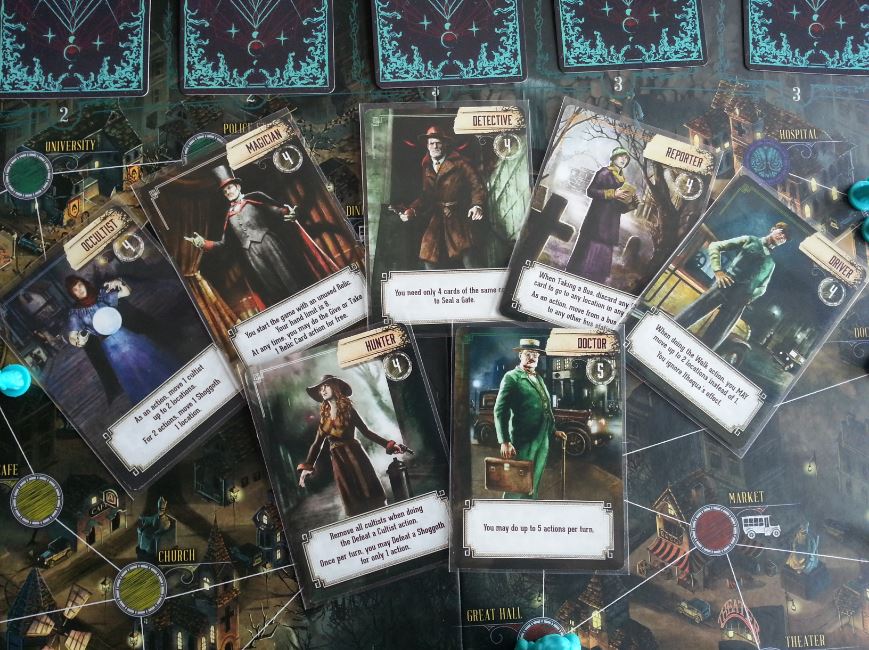 At its heart, PRoC is a fully-cooperative, action-selection, set-collection game where there is only one way to win and that is to seal 4 gates. True to Pandemic fashion (and other similar games in that mold), there are, of course, more number of ways to lose. Namely: 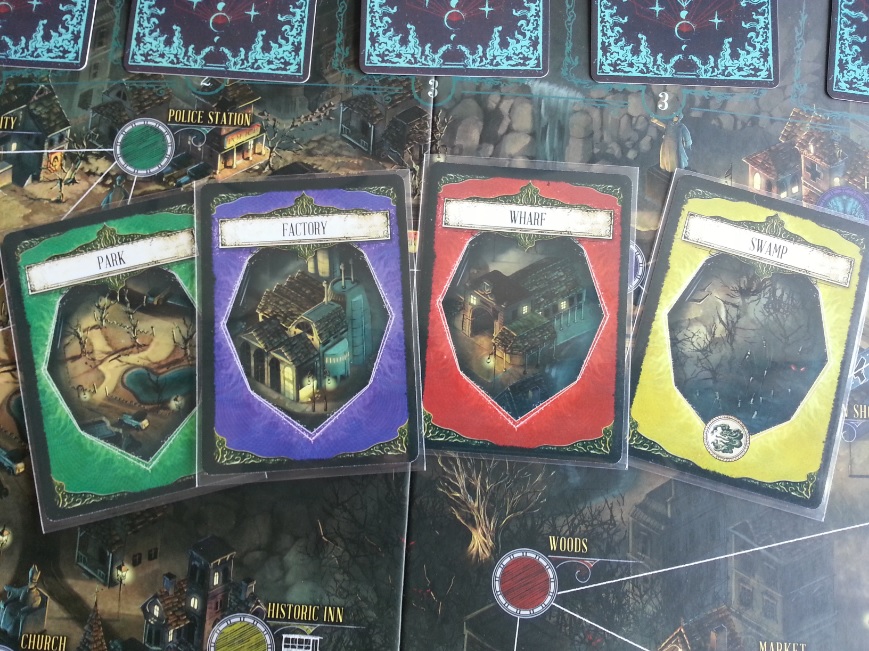 Speaking of gates, they are spread equally in the four major towns depicted in the board, organized by color – Arkham (green), Innsmouth (blue), Dunwich (yellow) and Kingsport (red). To those that have played the original Pandemic, you might have noticed that they simplified the board a bit, rather than having “specific location cards,” you now have cards that represent a specific town of that color. We will go over the other changes as we go along, but for now let me discuss what actually happens in a turn.

The basic, bread and butter formula of Pandemic for the most part stays the same. The phases of a turn are as follows:

DO 4 ACTIONS – In your turn you do up to 4 actions listed below, the same action can be repeated as many times as you want as long as you have enough actions or resources to perform it.

By walking – Moving from 1 location to another adjacent location connected by a line.

By Taking the Bus – When you are in a bus station, you can use a matching clue card to move to that specific town or location. This replaces the “research stations” in the original game.

By using a gate location – Another new feature in movement where you can now effectively “teleport” from town to town via gates depicted on each town, making a sanity roll in the process. (More on the sanity mechanic later.)

Trade Action (1 action) – For one action, give or take 1 Clue card or Relic card from another player that shares the same location as yours.

Seal a Gate (1 Action) – On a gate location, discard 5 cards of the matching color of the town that you are in to “seal” that gate. In addition to that, remove one cultist from each location matching that color, returning it to the general supply. Additionally, roll the sanity die as well, which will be tackled on later.

Defeat a cultist (1 action) – Simply remove 1 cultist on your location and return it to the supply. As you might have guessed, the cultists replace the “infection cubes” now, which are more awesome TBH. Even with the change, they still rack up quite fast! More on that in a bit (see Awakening Rituals below) 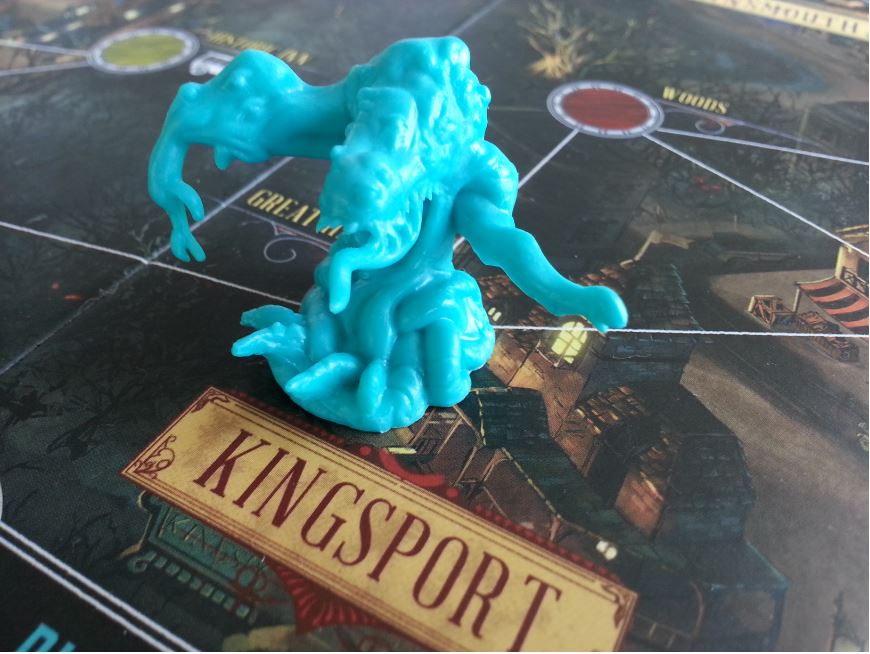 Defeat a Shoggoth (3 actions) – If you think those cultists are annoying? Well here comes the Shoggoth! These creatures (from the Mountains of Madness storyline) take 3 actions to kill… THREE ACTIONS! And if that’s not enough, Aside from taking 3 actions, since these big nasties are from the unspeakable horror variety – whenever you fight, or encounter a Shoggoth in your location, you have to roll the sanity die, increasing your chances of going insane.

But wait there’s more! These figures actually move! (Not literally of course, but it would be amazing if it could!) And they move whenever the Shoggoth icon is revealed (during the summoning step). They always move towards the nearest gate, triggering an Awakening ritual.

DRAW 2 PLAYER CARDS – Replenish your hand and draw 2 cards. This signifies the end of your turn, moving to the SUMMONING STEP. 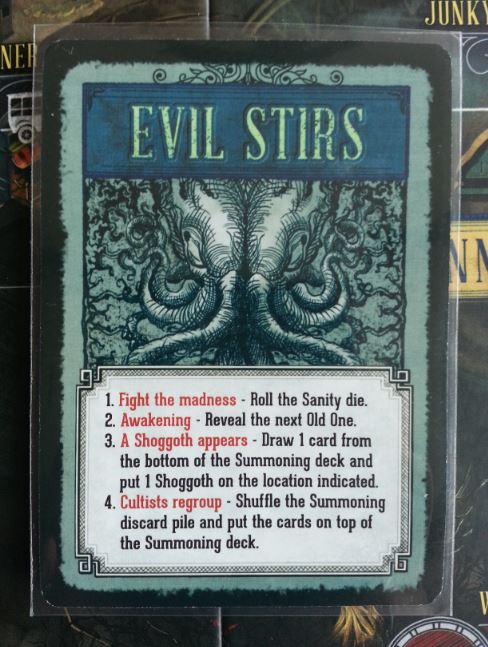 SUMMONING STEP – This is where the big bad guy takes his turn, draw summoning cards equivalent to the summoning rate (shown on the Great Old One track). Here you add new cultists on the board or sometimes, draw that mean “Evil Stirs” card, which replaces the Epidemic card. It’s never good when you see this card! As it lets you roll the sanity die, reveal the next Old One, and have you spawn another Shoggoth. In that particular order.

And that’s how a turn goes! To simplify it a bit, you just take up to 4 actions, then draw 2 player cards, then draw summoning cards equal to the summoning rate. Easy enough right? Now, let me discuss some of the new changes made from the original Pandemic: 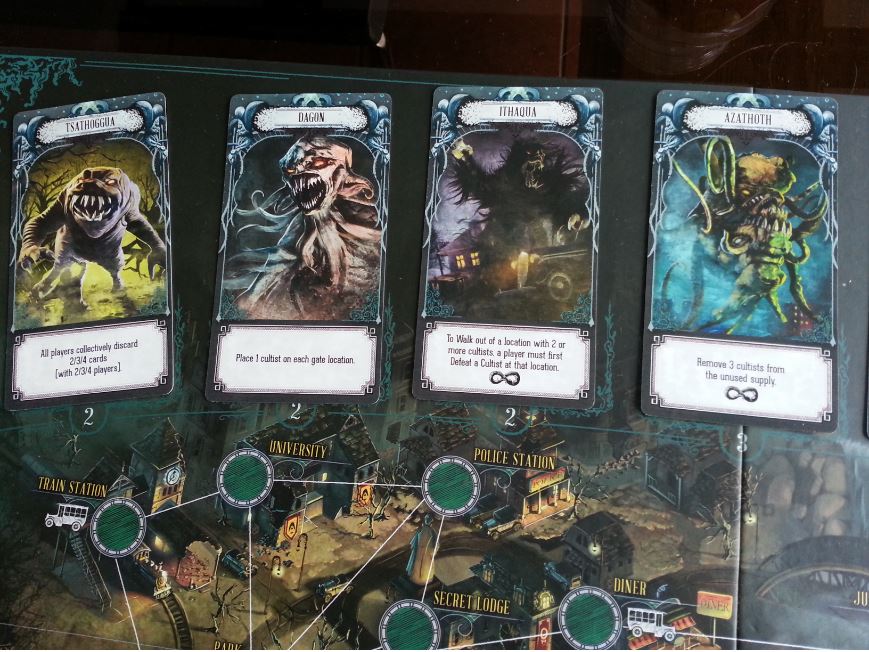 Remember those cultists? Well, if you happen to ignore these little buggers it can prove to be unwise! Whenever you have to put a 4th cultist on the same location, an “awakening ritual happens” where they successfully summon a Great Old One (GOO) in the track above the board! This replaces the “Outbreak” mechanic in the original game. Which to me is actually for the better…

Why you say? Well during the setup of the game you shuffle those GOO cards and lay them out face-down in the track above. During the course of the game you reveal these nasty horrors during an awakening ritual, one at a time starting from the left. This neat little change really hits the spot for me! since each GOO does different things, they always come out in a different order every game, greatly upping the replay value of the game… Even more so than its older brother by a mile! It effectively changes your strategy and how you approach the game. 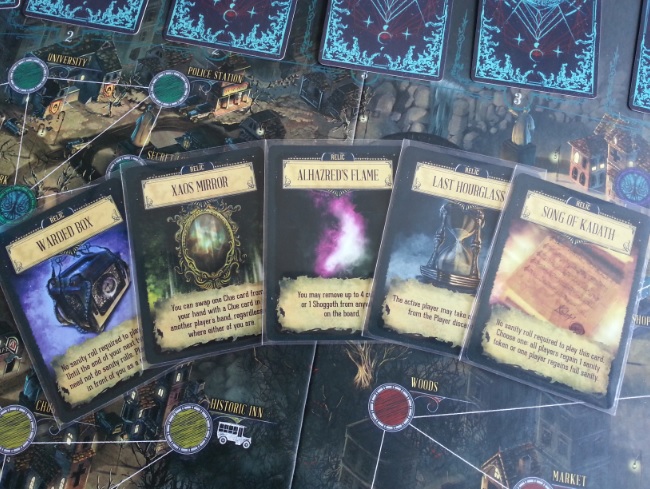 Relic Cards – These cards are the “Event cards” before, which provide various, powerful effects to the one who plays it. They can be played at almost any time during any player’s turn. A downside to this is that you have to roll the sanity die when using this. 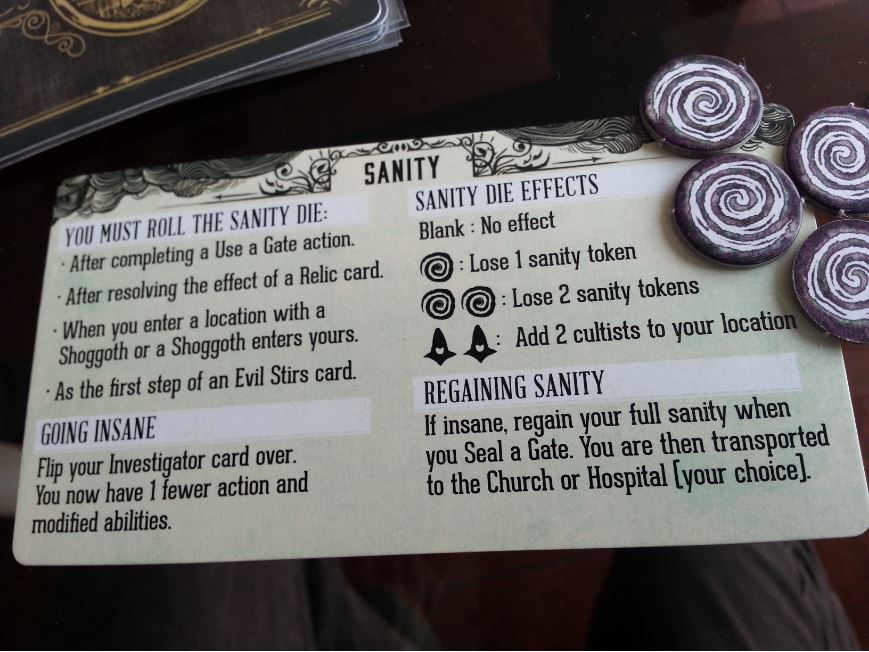 Another favorite mechanic of mine! This is really an enduring (if not staple) feature in almost all of the Lovecraftian games I have encountered (Arkham/Eldritch Horror, Call of Cthulhu RPG). And PRoC is no exception this! This goes back to the concept of the whole “unspeakable, unimaginable” horror that if it doesn’t kill you first, there is always a good chance you’ll end up being crazy instead.

Whenever you have to make a sanity roll, it’s either you lose sanity tokens, spawn 2 cultists at your location, or nothing happens. 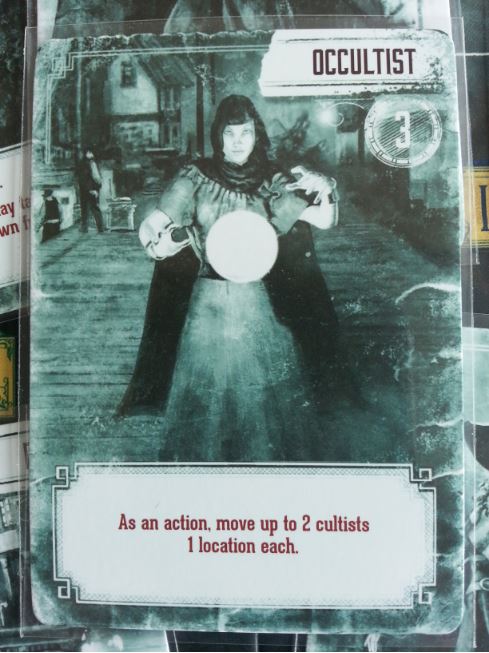 Whenever your run out of sanity tokens your character immediately become insane! Your total number actions per turn now becomes 3 (instead of 4). Another nice touch added to this is that you flip your character card to its “insane” side – which drastically changes your special abilities that, in some cases, are for the better I think. Take a look at the Occultist character card! Instead of moving 1 cultist, when you go insane you get to move 2!

Another nice change that they did is when you get to choose your starting character. Instead of handing out random cards, the first player draws 2, gets to choose 1 then give it to the next player in which he will draw an extra card and choose from those 2, and so on… It’s not a drastic change, but at least it gives you a bit more control on the selecting process. 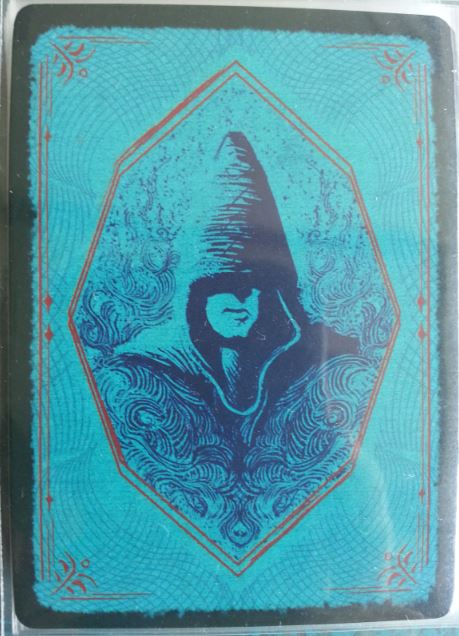 And there you have it! I really like this version of Pandemic, mainly because of the theme. I never really owned the original but if I had both Pandemic and this one, I would most likely Jones Theory the former. I would understand that the theme might put some people off from this, but with the new changes like the terror track and sanity mechanic, it really adds a lot more replay value and decision-making that makes it worth a look!

- Advertisement -
Previous articlePokémon GO Tools to help you get your next Catch or Evolution
Next articleThe International 2016 Dota 2 Championships is LIVE!