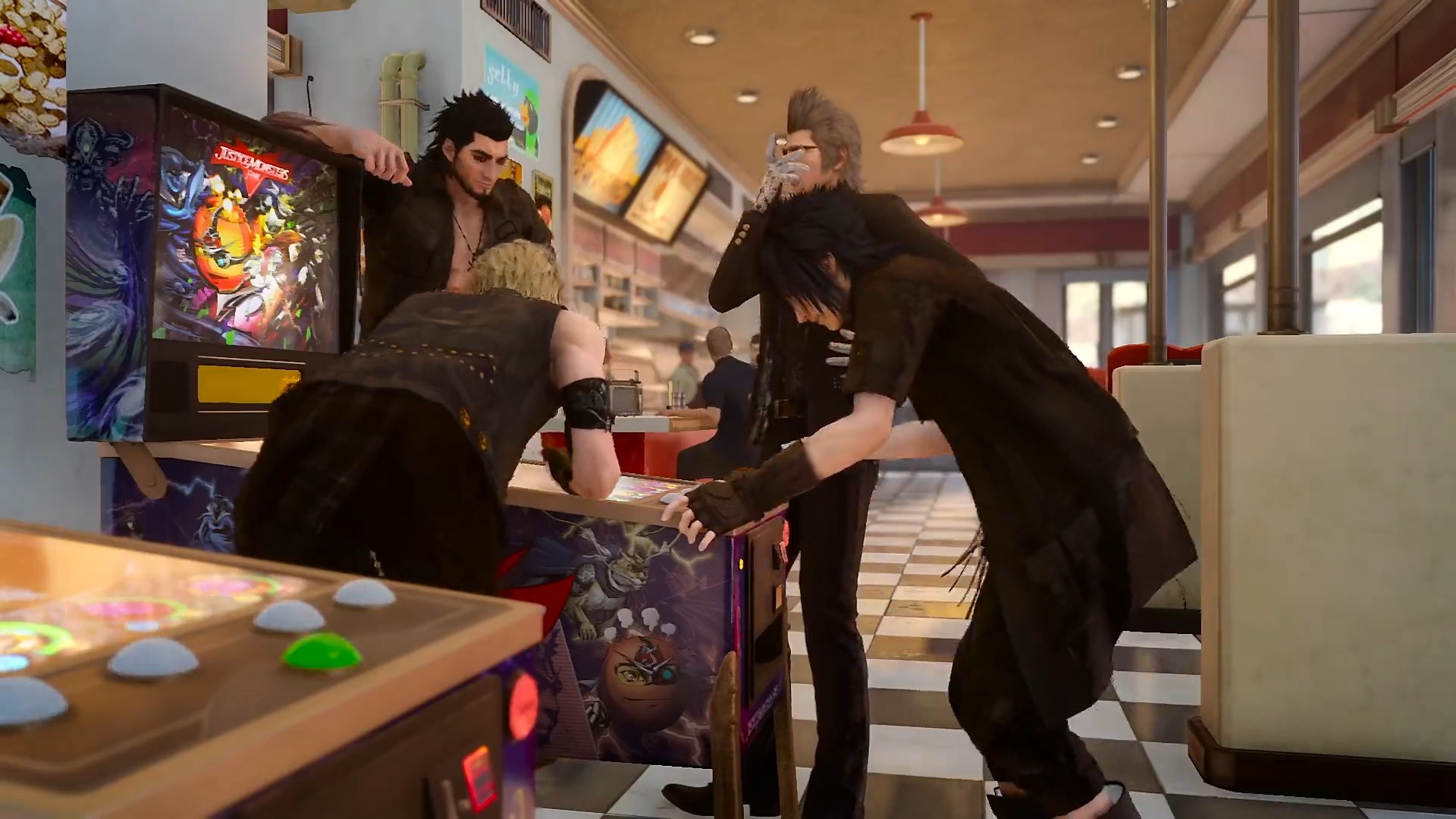 Here we are, days before the release of arguably the most anticipated game of the year, and just like you, we CANNOT WAIT for November 29 to take us away to the Kingdom of Lucis and form a boy band and push a car across a desert! While we are a weekend and a couple of days away from the worldwide release of Final Fantasy XV, Ungeek got a chance to play the final build of the game early and boy oh boy did we enjoy every minute of it! Read on to find out our impressions of the game!

For the uninitiated, Final Fantasy XV is the latest installment in the long running Final Fantasy franchise and while the general audience has been on a love – hate relationship with the recent Final Fantasy releases (13-2 and Type 0, I’m looking at you), everyone is hoping that XV will be THE Final Fantasy that brings back the series to glory. With the recent release of the short anime series called “Brotherhood” and the epic CG movie “Kingsglaive”, Final Fantasy XV looks to be headed in the right direction and we are hoping that come November 29, we will be playing a game worthy of the 10 year wait.

Our playtest starts off a bit slow. I know this is not something you might want to hear but if it’s any consolation, most RPG’s do not start out guns blazing. We are treated to a cutscene that lays out a broad idea of what the general story will be and right off the bat, the first thing you notice is that this game is FREAKING BEAUTIFUL. The cutscene seamlessly transitions into the in game graphic, which honestly you cannot differentiate anymore, as I caught myself just rotating the camera angle around to admire the scenery. Day and night are properly represented in the game and as the time changes, so does the scenery too, with some places and monsters only available during a certain period of the day.

The in-game English voices were actually pretty decent. They’re not “Japanese Dub fantastic” levels, but they’re not “Final Fantasy X Tidus” bad. After a few minutes of dialog and aimless walking, we ride off into the sunset in the Regalia, our awesome car that breaks down in the middle of the desert, thus leaving the party to push the car across miles of concrete. I swear you cannot make this up. ¯\_(ツ)_/¯

One thing I notice is that the load times are… how do I put it… quite time consuming. Soon enough, as I progress through the game, I realize why. While playing through the game, I hardly encounter any load times, if I remember correctly I experienced no load times at all up until the end of the chapter. This makes the game experience feel very seamless, transitioning from exploring to battles without interruption. This now brings me to the battle system.

To give context, I am a fan of the turn based battle system from the past Final Fantasy games. If it didn’t have that trademark gauge and action menu, then I was cautious towards it. I knew what to expect here, since I’ve downloaded and played the various demos made available to the public but since they were not final builds, I figured it would be wise to reserve judgement until I got to play the final iteration. I was pleasantly surprised when I jumped into the first battle, the lack of a “glass shatter” screen was surprisingly welcome and I was presented with the battle controls in an instant. While it took me a bit to get used to this free roaming type of battle given that this was a Final Fantasy game, it did not take long to appreciate the change. The battle system in XV comes as sort of a love it – hate it type of system, where some people might not appreciate the fact that you can win a lot of battles by simple pressing one button. To be fair, a lot of the battles from the previous games can be won with your eyes closed when you’ve leveled up sufficiently so it really is just the way you approach the game. I played the game with the eagerness of a little kid and I honestly enjoyed the shift in mechanics.

As you battle and level up, you gain AP points which you can use to level up your skills through the Ascension Grid system. I LOVED the Sphere Grid and Crystarium system from Final Fantasy X and XIII respectively and am very much ecstatic to see it return to form here in XV. The skill categories from the Ascension Grid are divided into Magic, Combat, Techniques, Exploration, Teamwork, Recovery, and Stats and spending your valuable AP will allow you to build your party as you see fit.

While exploring the land of Eos, you will notice that there is a LOT to do: gas up your car, collect various resources from the land, complete sidequests, and a lot more. It definitely doesn’t “feel” like an FF game, and while this may leave a bad taste in the mouth to some old school Final Fantasy fans, it’s a direction that makes a lot of sense when you consider the other elements in the game.

The things you do or the items you collect contributes to a big part of the game and it certainly was not added “just because”. The “Cooking” skill from Ignis for example allows the party to consume food that will give them stat bonuses going into the next few battles. The type of food that you can cook depends on the skill level, and consequently, the stat bonuses will depend on that too. The “Fishing” skill from Noctis will allow you to catch fish from certain spots in the map and these fish will allow you open up new meals that Ignis can cook. It’s nice to see how a lot of the mechanics in the game is tied together which allows for a more immersive experience.

Talking to the people of the land will sometimes trigger dialog choices (similar to Dragon Age and Mass Effect) and while we have yet to figure out if it will affect the outcome of the events in game, what we can say is that choosing different replies will yield you varying rewards (some choices give additional EXP, AP, etc). I particularly liked the fact that you can give Noctis a personality. It may not be much, but it was refreshing to see that the main character is someone who actually has meaningful conversations, whether you choose to be a good guy or a douchebag is completely up to you.

In numerous instances while driving or exploring, the party will engage in conversations that may reveal a lot of tidbits about the party members, the current events in the land, and many more. This little detail is something that just adds to the overall atmosphere and feel of the game, allowing you to make a connection to the world and its characters and not just “play” through the game without having a sense of attachment. Little (but utterly solid) mini games contribute to the massive “world-building” that Final Fantasy XV wish to achieve.

And the music? The soundtrack to the game is absolutely fantastic. While we have not listened to too many tracks to make a sweeping statement, we can safely say that what we’ve listened to during our playthrough was an experience on its own. From the main theme “Somnus” to the excellent rendition of “Stand By Me” from Florence and the Machine, the soundtrack is an auditory treat from Shimomura-san, well known for her work on Kingdom Hearts.

For the relatively short time that we got to play the game, I can say that I’ve experienced enough to get me excited for the official release. I have my gripes here and there and to tell you the truth I wish that certain aspects of the game was implemented differently but overall, color me impressed. Final verdict? I may not be the right person to ask because I am a HUGE Final Fantasy fan but I think this will shape up to be a masterpiece of a game for people who are new to the series and even for long time fans. It’s a game that may take a while to appreciate, especially for old school / traditional fans but you definitely owe it to yourself to give XV a shot. I cannot wait for November 29 to come as I will be dropping everything and be playing this game from the minute it goes live. Have you preordered the game and did you manage to get yourself a hold of the very limited Ultimate Collectors Edition or did you just settle for the Standard edition (or are you getting the super gorgeous PlayStation 4 Slim FFXV Luna Edition)? Let us know you thoughts and your stories, we’d love to hear your Final Fantasy XV experience!

Without spoiling too much, check out a few more snaps from the game as well as our video of the playthrough featuring our good friends Ram and Seikachu from GGNetwork!

Final Fantasy XV will be released worldwide on November 29, 2016.

- Advertisement -
Previous article
The Comeback is Real! Special Force is Back on CBT!
Next article
We know exactly what we want for our Christmas wishlist, the ROG Claymore + Claymore Core!