One Heck of a Ride! | UNFAIR Boardgame Review 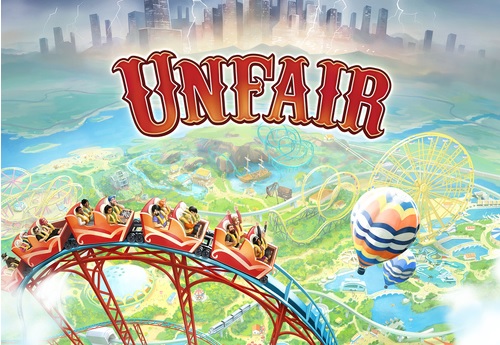 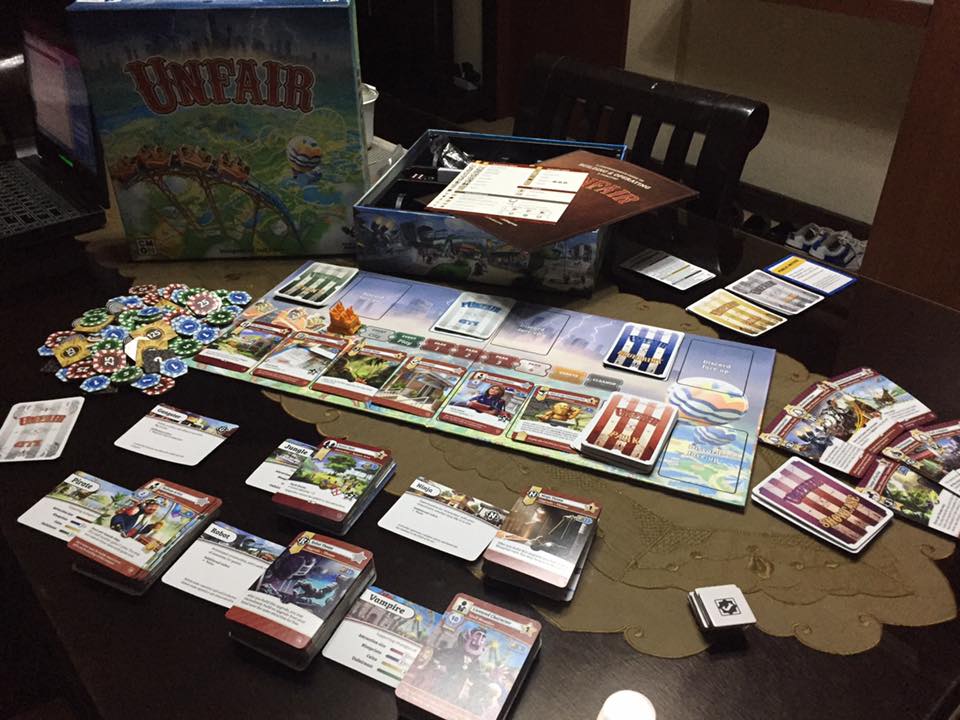 In a world where everything seems to be cutthroat competitive, the amusement park business is no exception. Especially if your attraction just so happens to feature a “ninja” theme, you know that they seriously want people to gather at their main gate.

Well this a breath of fresh air! From Good Games Publishing and recently picked up by Cool Mini Or Not (which is another reason this caught my eye) comes a game with a theme that I don’t see very often in tabletop. Check out UnGeek review of Unfair! Yes that’s two Un’s in one sentence, woo-hoo! 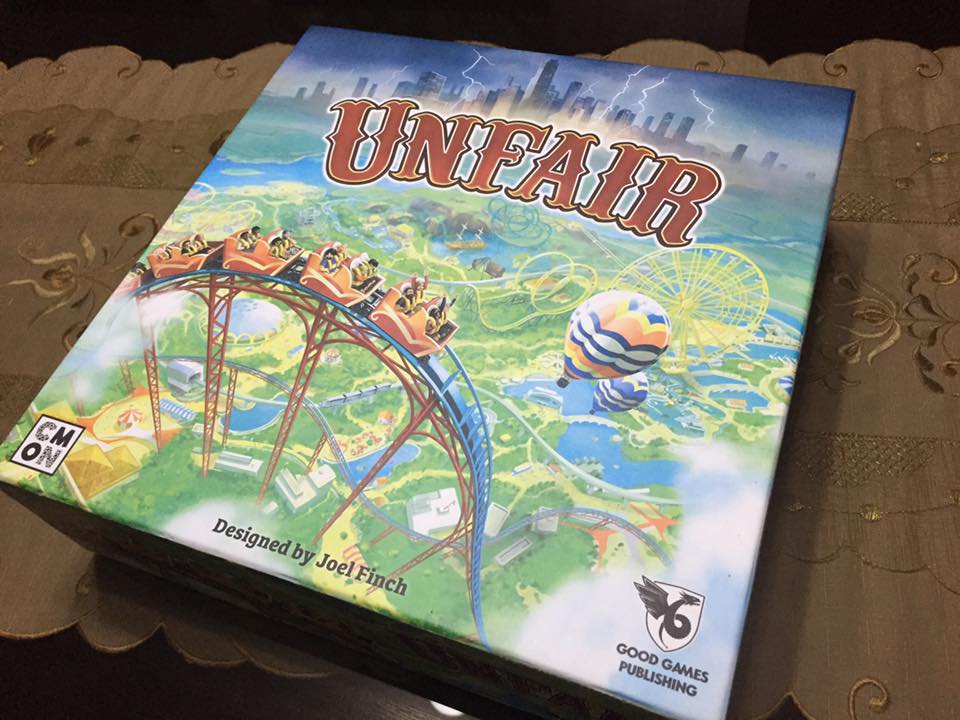 At its core, Unfair (Designed by Joel Finch) is a 2-5 player tableau-building game with a take-that/ high interaction mechanism via the use of cards. In this game, players assume the role of theme park owners wanting to lure out as much customers as they possibly could. Sure you could acquire blueprints and hire staff in order to make your park much more appealing, but in Unfair you can also resort to other methods like, say vandalize the neighboring parks, or even bribe officials! All of which are viable strategies here.

Ultimately you win by getting the most points. There are many different ways to score in Unfair, and it is by:

Central Game Board – Serves as a placeholder for the various cards as well as an indicator when the current play is via the use of a track. 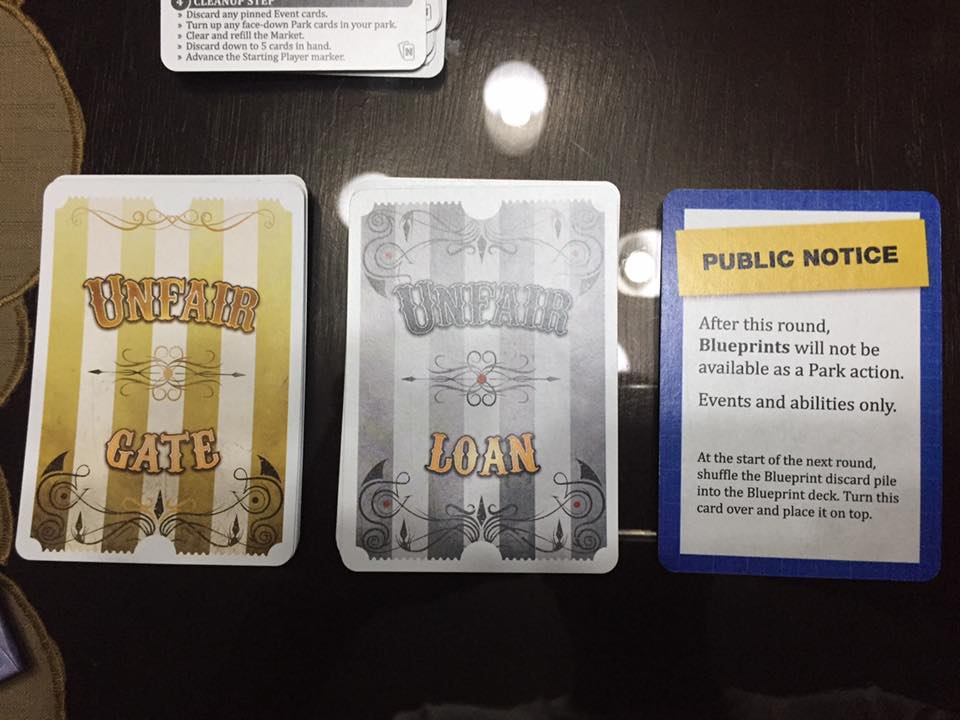 Cards – And lots of it! Aside from the ones shown above there are Event Cards, City Cards, Blueprint Cards, and Showcase Cards, all of which feature consistent high-detail art that brings the game to life. 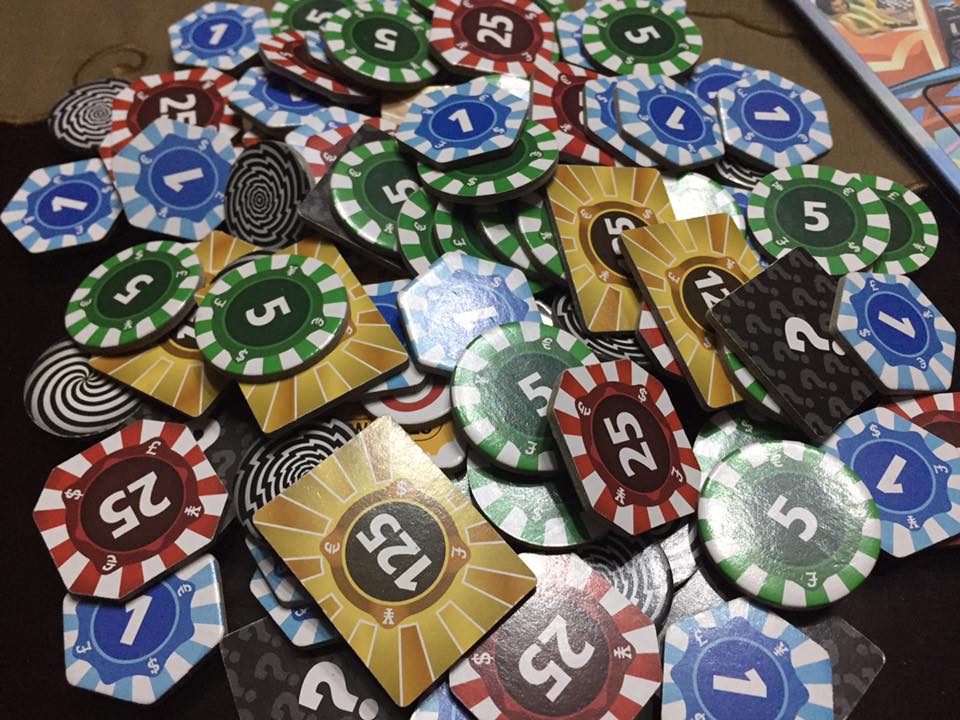 Setting up the game is pretty straightforward, at the start of the game (aside from placing the central board, of course) players first decide on what “theme” they want to use for the whole game. You don’t get to use every theme per game which is a neat way to add a lot of variety and replay value. 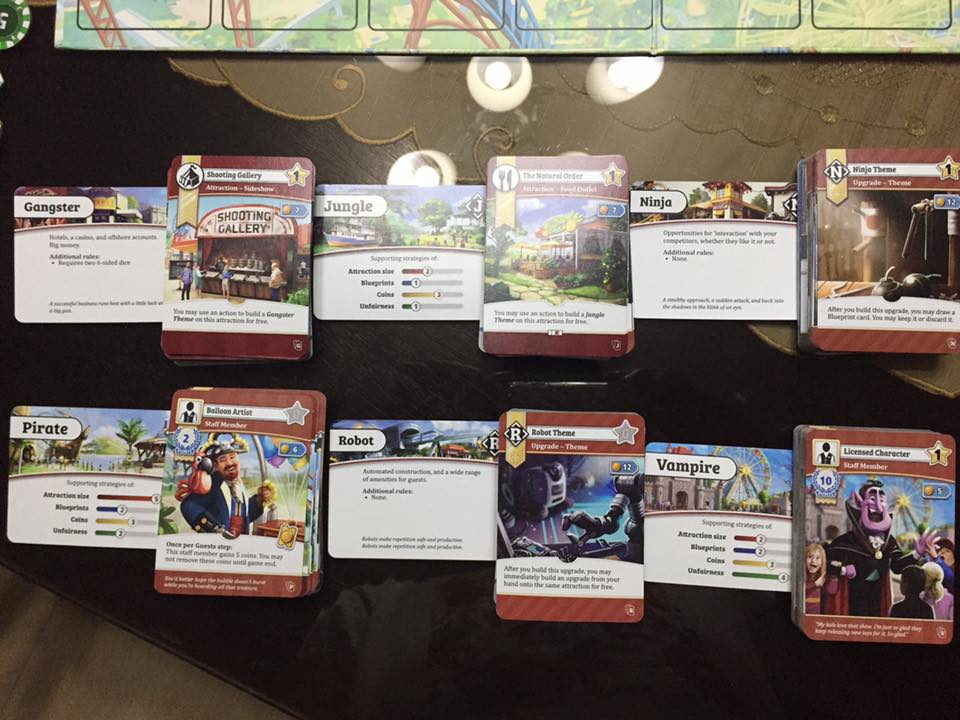 They come in different varieties like Ninjas, Vampires etc… Each deck will have cards that have 6 different colored backs. All cards of the same colored back should be taken away from their theme deck and shuffled together to form a total 3 unique decks, all of them matching the same color at the back of the card.

Each player now must receive a yellow Main Gate Card, a grey Loan Card (to which you place face down above the main gate card), a player guide and 20 starting coins.

Place all the cards on their respective placeholders in the central board.

Now, each player must take 5 cards from the Red Park deck. Important! If a player receives no Attractions in their starting hand they can reveal their hand and reshuffle their cards into the deck and draw another 5, making a new hand. 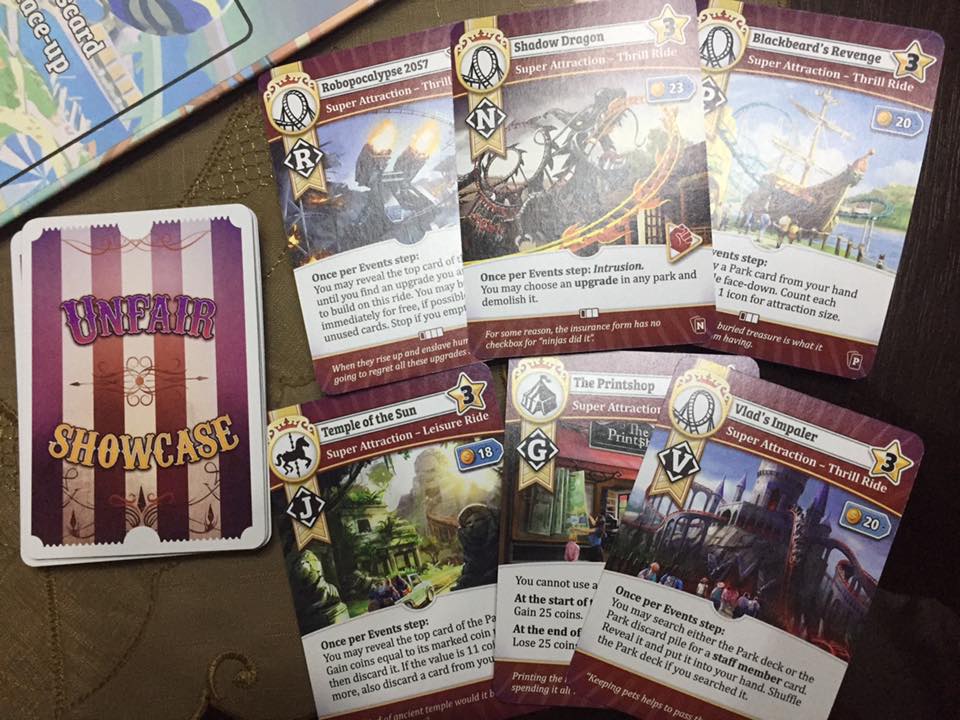 Each player now must take 2 Showcase Cards, to which you must put face-down in front of you. These cards can be inspected by their owners at any given time.

Lastly, a total of 6 Park Cards are drawn face-up and placed on the Market locations found on the board.

Now we can begin!

A game of Unfair lasts for a total of 8 rounds in which you attempt to build the best theme park this side of town while at the same time trying to stop the competition who is also doing the same thing!

Within each of the 8 rounds, the game is further divided into 4 steps or phases. After each phase is completed, a neat little rollercoaster marker is advanced to keep track of the current play.

PHASES OF THE GAME

So here are the phases that you must follow in order:

Draw an Event Card – Each player in turn order draws one card from the Event Deck and adds it to their hand.

City Event – The starting player flips over the next card in the City Event Deck. The text or effect of this event is read out loud for the players and its outcome is to be implemented at a specific time within the round.

As you might have noticed, the way the game is made in such a way that the first 4 events in this deck offer positive effects that first help the players at the beginning of the game, hence are called Funfair event cards. The last four events in the next half of the game represent the challenges of running a theme park business in which the players must try to manage. That is why they are called Unfair events.

Play Event Cards –  Beginning with the start player, each player can choose to play an Event Card from their hand or make a pass. If a player passes, they are still in the round and can still play a card once the turn goes back to them, unless all players I turn order made a pass, thus ending the round. Let’s take a closer look at the event cards:

Most Event Cards have two options. The top part of each card offers a beneficial power, while the bottom option almost always has a “take that approach that targets your opponents. Additionally, some of these cards can act as responses, allowing a player to block an aggressive action played by someone else.

The real meat of the game where all the good stuff happens! And this is also the phase where you construct your dream-theme park!

In this step a player can do UP TO 3 ACTIONS, detailed below:

DRAW A CARD – This gives you the opportunity to get the cards that are on offer. You do this by taking any one card from the Market on the central board and put it to your hand, replacing a new park card in the process.

The players can also choose to draw 2 CARDS from one of the DRAW DECKS – Namely The Blueprints Deck, the Park Deck or and the Event Deck specifically. When you do this just draw 2 and choose either one or none of the cards you just got.

The last option is to DISCARD 1 CARD, THEN DRAW 5 CARDS AND CHOOSE 1 (discarding the rest). This is a nice little move that can give you a lot of options, specifically when you need to get what you need for those blueprints.

BUILD A CARD – A player can choose this action to build a card directly from their hand or a card that can be seen in the Market. The kinds of cards that can be built and added to your theme park are attractions, guest services upgrades, staff and resources.

To do this, a player simply pays the cost of the card before placing it to their player mat (tableau). Keep in mind building restrictions, which are easily shown in case you missed it.

If a card was built from the Market, a new card is turned over to replace the one taken.

Another option when taking a Build Action is to build one of the Showcase Attractions that you get at the start of the game. These are game-changing cards that usually attract the big crowds and give you variable power that you can use as long as the attraction is operational. Aside from the cost and restrictions, you also must have a least 5 stars for the council to authorize your project.

DEMOLISH A CARD – This action allows a player to demolish or remove a card from their own theme park. While it make look like a disadvantage, in the long run this might prove beneficial. Once you play the game you will understand why you should take this action at times.

LOOSE CHANGE – Thematically speaking, your staff picks up coins that the customers might have dropped accidentally. Gameplay wise, when you do this action, simply EARN 1 COIN for each OPEN ATTRACTION in your park. 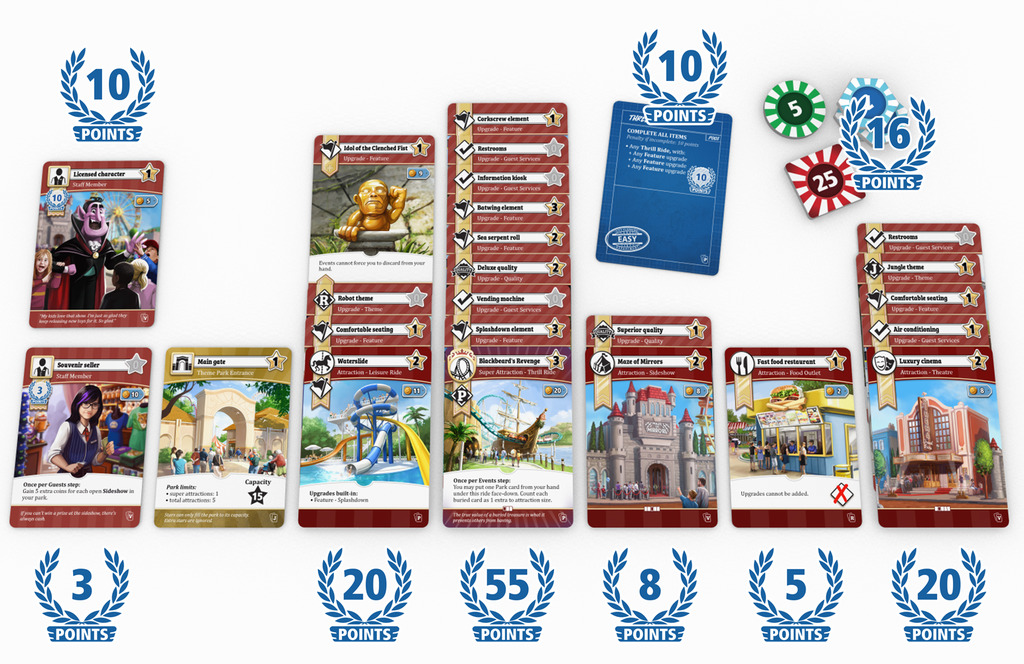 Like mentioned previously, you win the game by having the most points via building attractions, achieving secret objectives in Blueprint Cards and collecting coins. The player with the highest total wins the game! In the event of a draw, the final score is determined in this order.

And that’s Unfair! (That didn’t sound right) Here’s what I liked about the game: 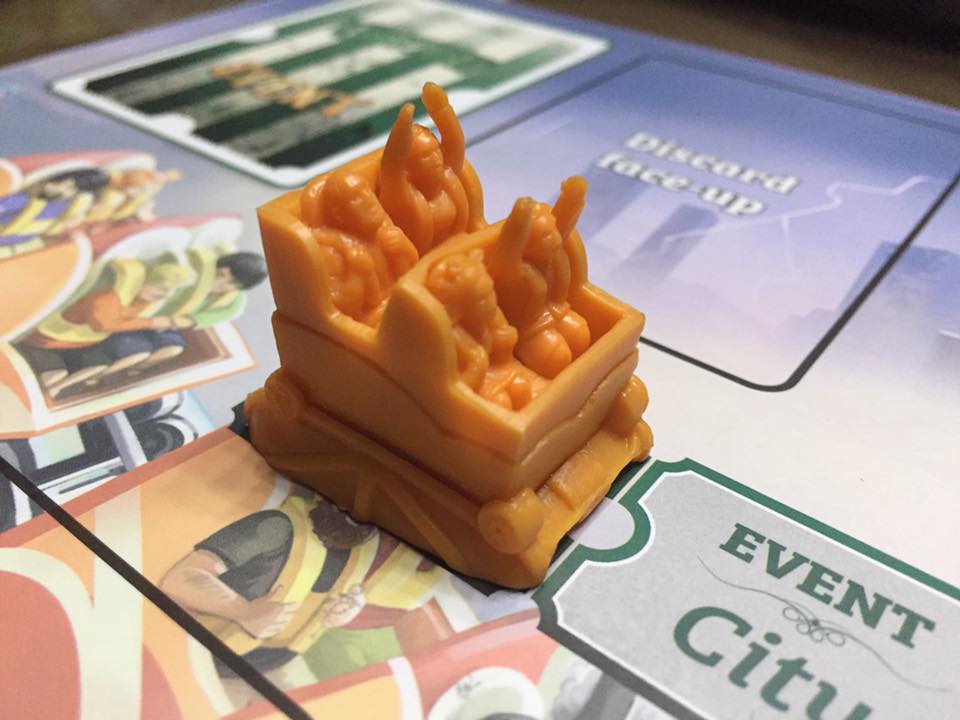 Some not so good feedback I received and experienced while playing the game is that the game can take a bit long to play, as is expected in a light to medium weight game. But this greatly diminished after playing the game more, another small nitpick is that some gamers might not like the take that aspect that is widely encouraged in the game. It was not an issue for my gaming group though.

To end this review, I would like to say that I always enjoy games that have you start out with nothing and end up with something (or something GREAT!) – Which is mostly present in tableau-building games, so this really came right up my alley and just made an instant spot in my collection.

Hope you enjoyed my review and keep on gaming!

Special thanks to GAMING LIBRARY for providing a review copy. If you want to try out the game for free, you could go to their ALL ABOARD event happening this April 29th! See you there!

- Advertisement -
Previous article
All Day, All Play FOR FREE! ‘All Aboard’, the Free Boardgaming Play Event, is BACK for International Tabletop Day!
Next article
Can you tell me how to get, how to get to SVCC? | Silicon Valley Comic Con Day 1 Highlights