Be a Hero in this “DARNA” Card Game, or Just Swallow Something Random! | History Con 2017 Highlights 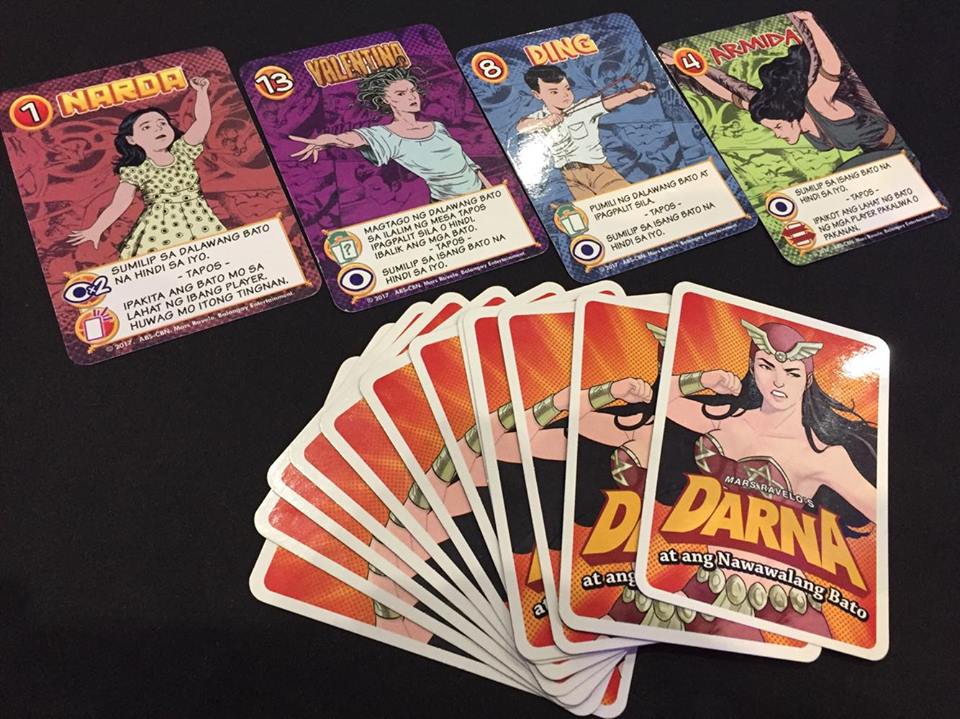 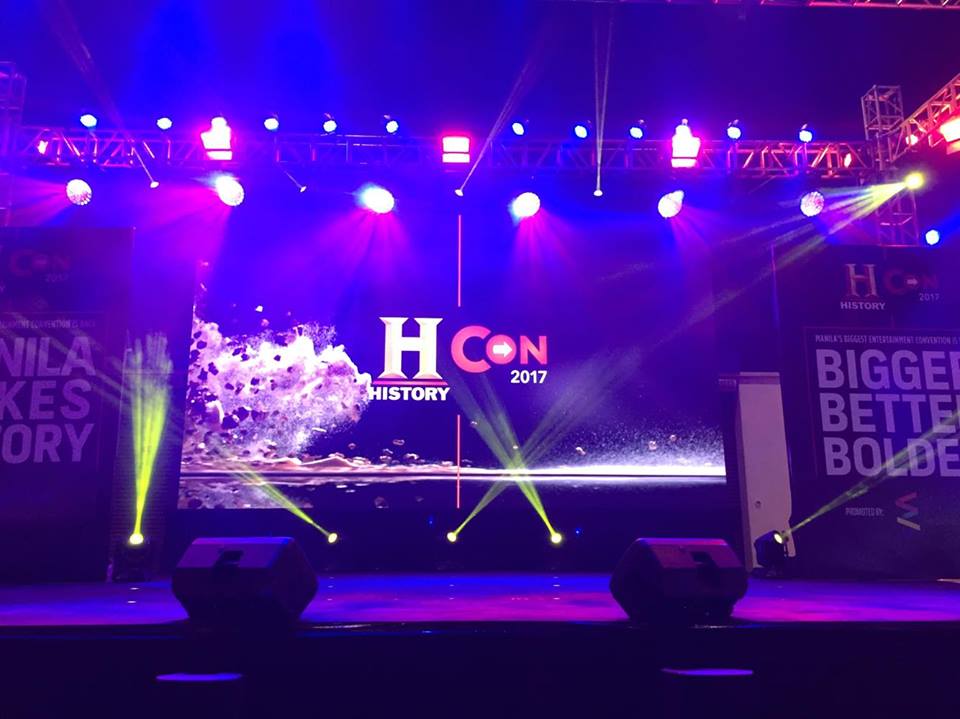 The recently concluded History Con 2017 in World Trade Center Pasay was nothing short of amazing, there is really something there for everyone and not just for history buffs.

Yes everyone, even those who like to play with tangible cardboard games. 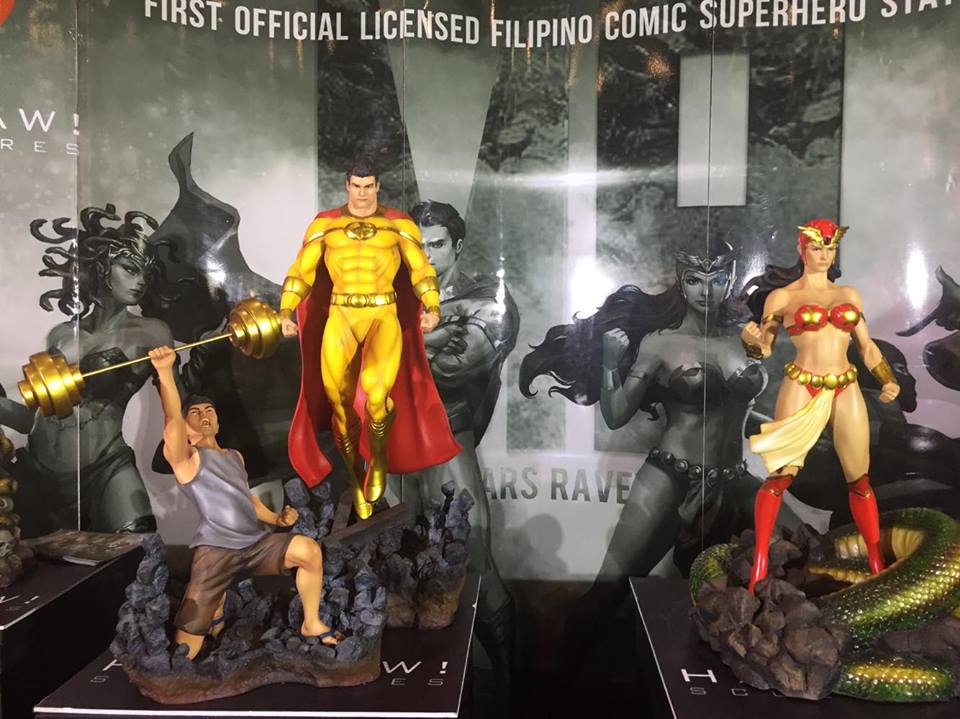 In this Mars Ravelo booth near the main stage, aside from the statues that depict our very own superheroes and villains, one particular item caught my eye. There were a set of “Darna” cards fanned-out and ready to be demoed.  Long story short my cardboard curiosity was piqued and I had to try out this locally-made game. 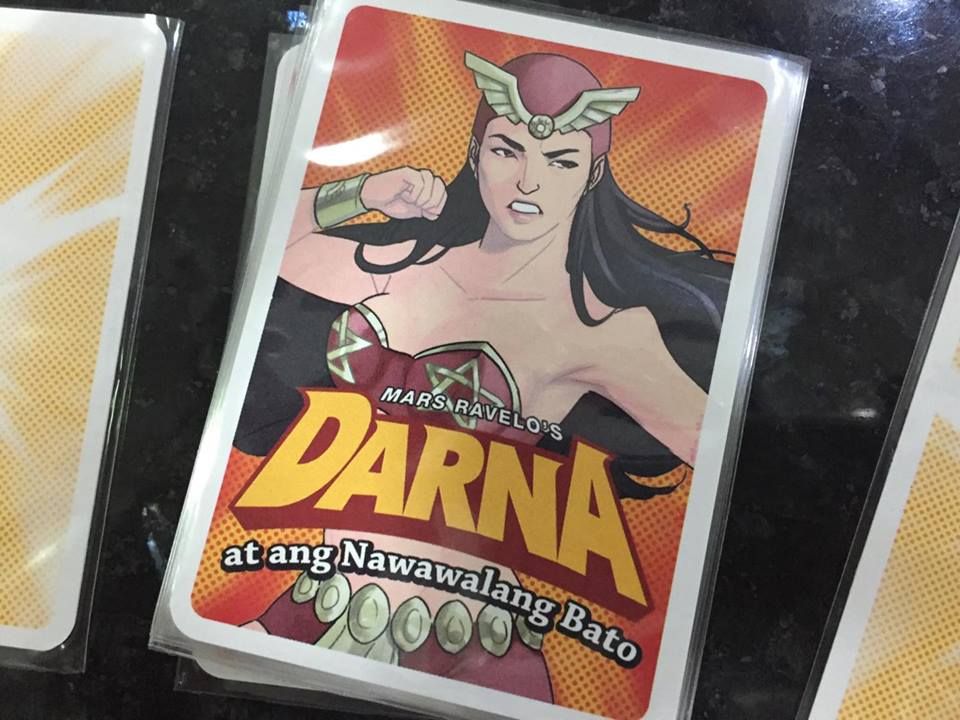 Before I share my experience a bit of fluff first for those who are not familiar with our local super-heroine Darna; In a nutshell is the Philippines’ very own Wonder Woman. And no before you say anything, she’s not a rip-off, I would state the differences here but it would take too long so I’d rather point you to this nicely written comparison article instead. So don’t think of her as your “twirling-around-Linda-Carter-style” hero that WW is known for…

Because Darna’s alter ego – Narda’s is a bit more practical in terms of transformation, she just swallows a magic stone and shouts “DARNA” – Instantly transforming her to her namesake, where she not only fights the common criminal, this girl also lays waste to some of our popular Filipino folklore characters. Neat huh?

And no, for those asking, Darna doesn’t have an invisible jet. 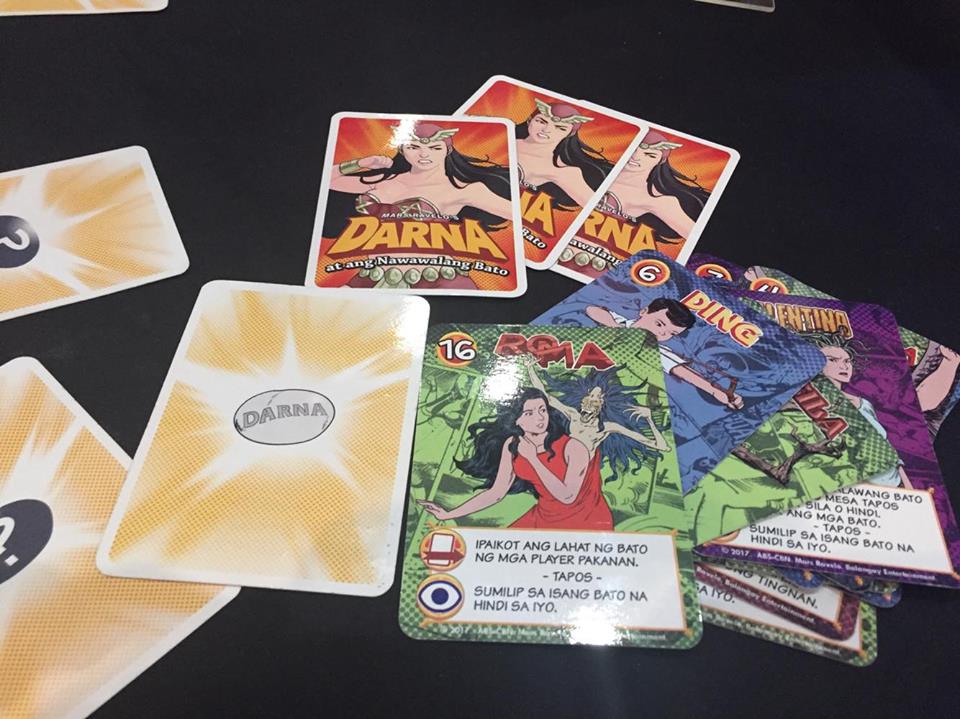 Going back to that magical stone I just mentioned, In Darna at ang Nawawalang Bato (Darna and the Missing Stone) the focus of the game is that famous white rock where 2-4 players take turns playing cards and shouting the titular character’s name, in hopes that you become the bikini-clad heroine. So you would imagine it would be twice as funny if a guy actually uttered those iconic words! 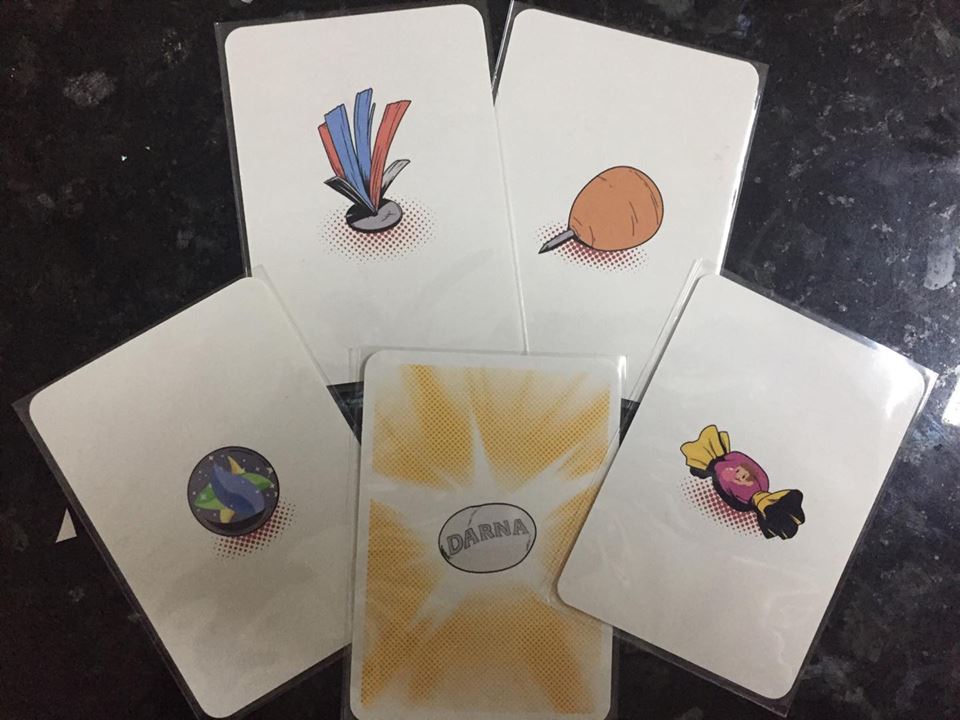 But you have to be careful though… Becoming Darna is no easy feat! There are a lot of trials and challenges one must face to become the icon. You might even swallow everyday household objects (like, say a top or a marble) along the way… Yikes! 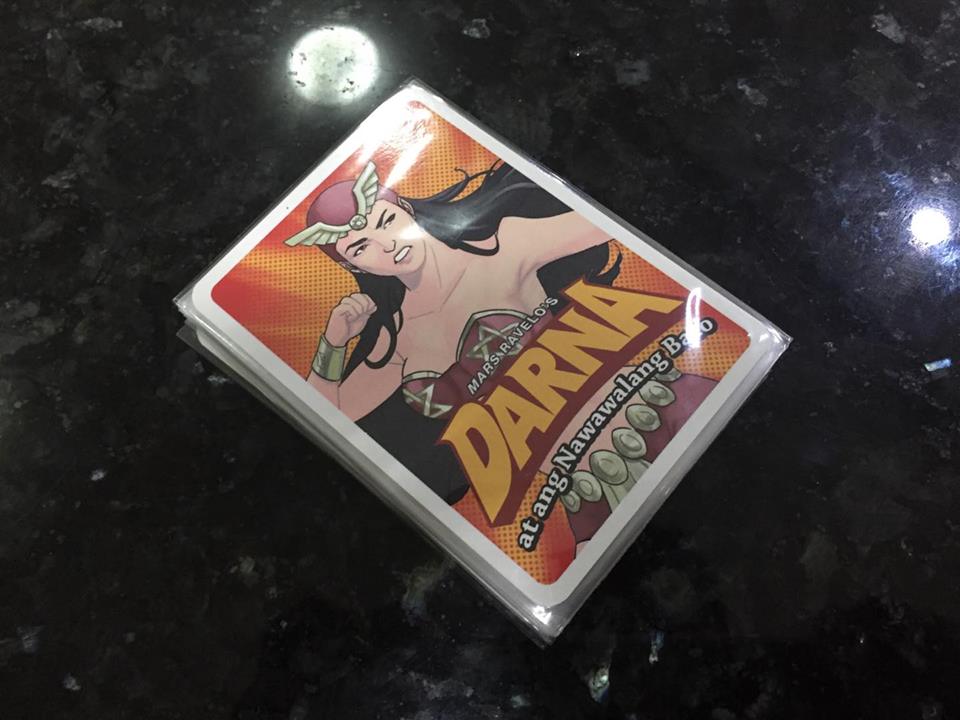 For example in a 4-player game it would look something like this: 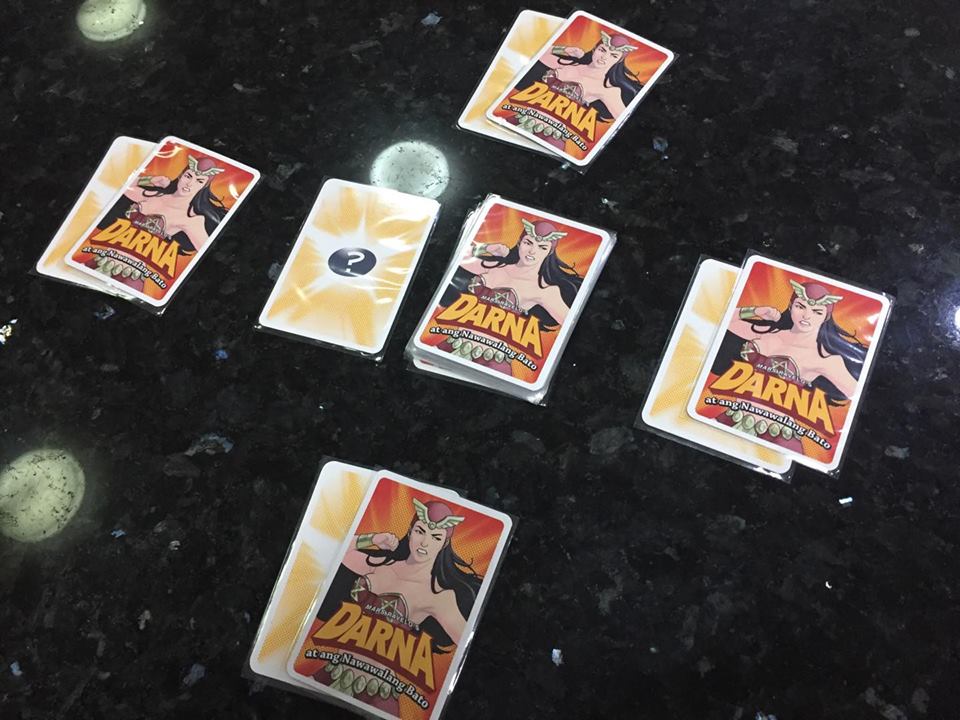 Randomly choose a starting player and now you can begin playing!

During your turn you can choose from 1 of 2 possible actions: 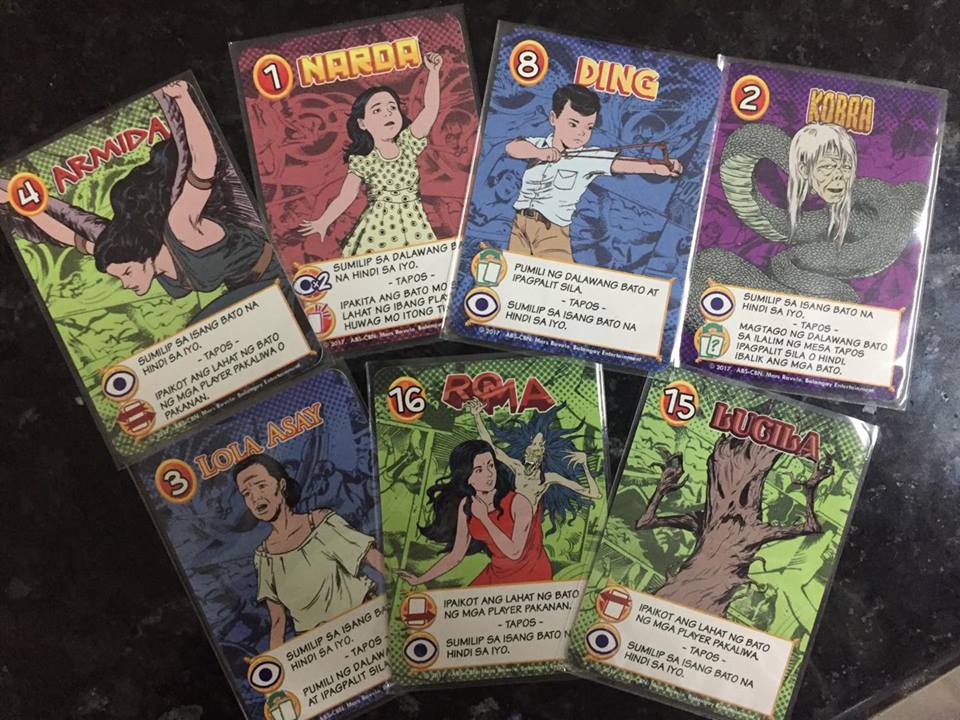 *There are various cards from the deck, showcasing different characters from the story. These characters have different effects that you must do in order (starting from the top). To give you a general idea, these cards either lets you peek at one of the facedown item cards or rearrange them in the order described. 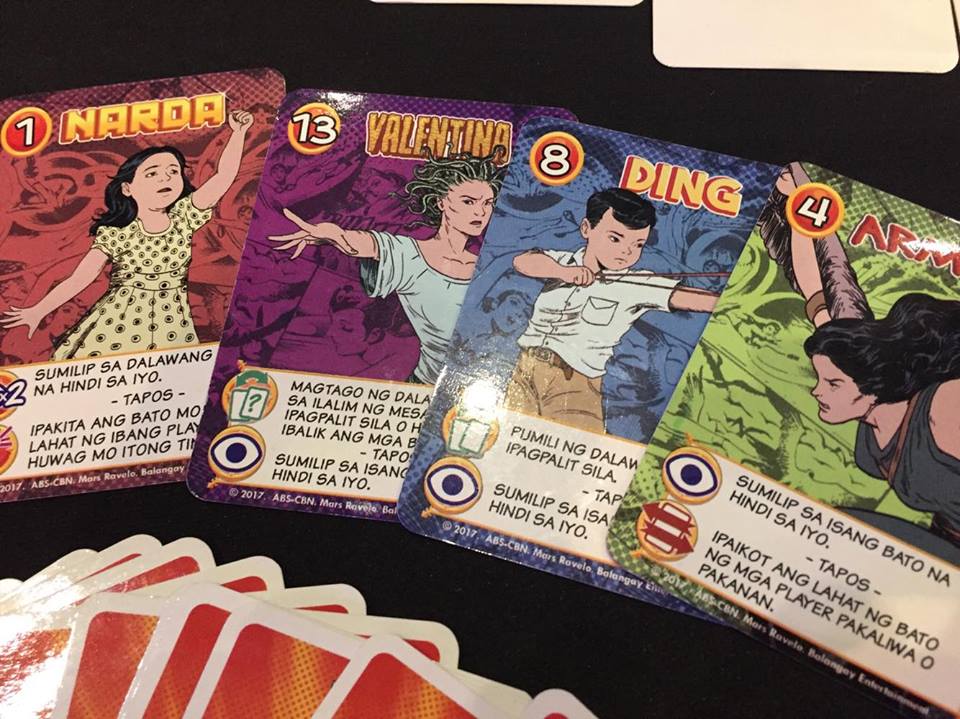 In the event that the player deck runs out of cards, each player now then reveals the card they have on their hand and check the numerical value found on the upper-left part. Starting from the lowest number players try to guess the location of the stone only once. If a player guessed correctly he or she wins! In the rare event that no one guesses, then everyone loses. 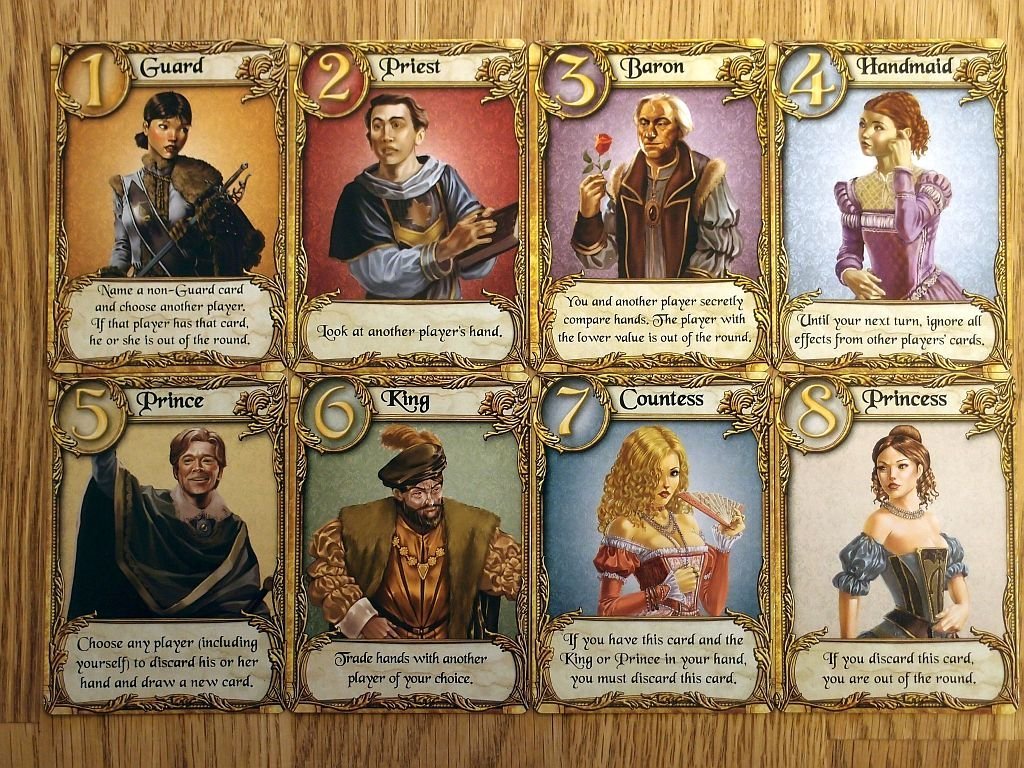 Playing Darna a couple of times reminded me of a few micro games that are in the same vein such as Love Letter and Lost Legacy. These light games plays fast, portable, easy to teach and can be used as “fillers” that you can bust out in between heavier entries. What I liked most about this game is the element of deduction and manipulation of the item cards. We always had a good laugh when someone peeks at another card, or when they get shifted. Even funnier when someone shouts Darna only to find out that they swallowed a marble. Hilarious. 🙂

Most importantly, they are really easy on the budget (The game costs P150 pesos or around $3) so this is really a good bang for your buck. Get it.

Lastly, I would suggest sleeving the cards as they are handled quite a lot during gameplay. 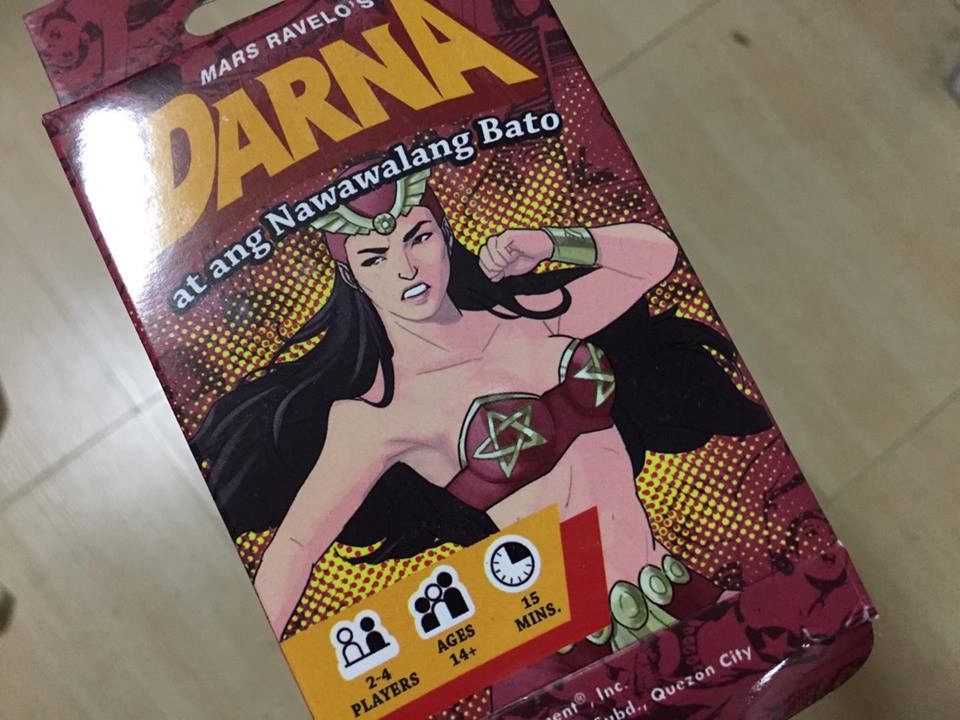 “Darna” and all its associated characters are copyrights of Mars Ravelo. The game is designed by Marx Rulloda and Karlo Senga and published by Balangay Entertainment Inc.

Also check out Balangay Entertainment’s Facebook Page for other games!

Related: A Frantic and Tense Boardgame That Also Teaches Us About Energy Conservation? Check Out ‘The Big Switch!

- Advertisement -
Previous article
Changing Perception. How the OPPO Factory Tour is making “Made in China” look sexy!
Next article
Marvel vs. Capcom: Infinite Producers Tomoaki Ayano and Kansuke Sakurai bring a Sneak Peek of the Game to the PH!