Do you know the bushido way? 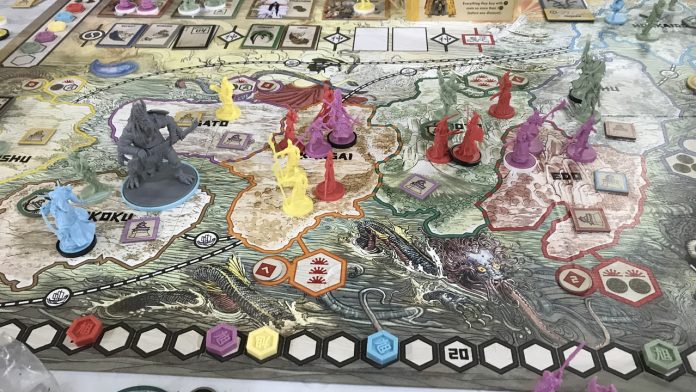 Welcome to Japan! Home of the noble samurai, playground of the kaiju and land of the Rising Sun! Rising Sun is definitely Eric Lang’s most anticipated board game to date! But does Rising Sun live up to the hype? 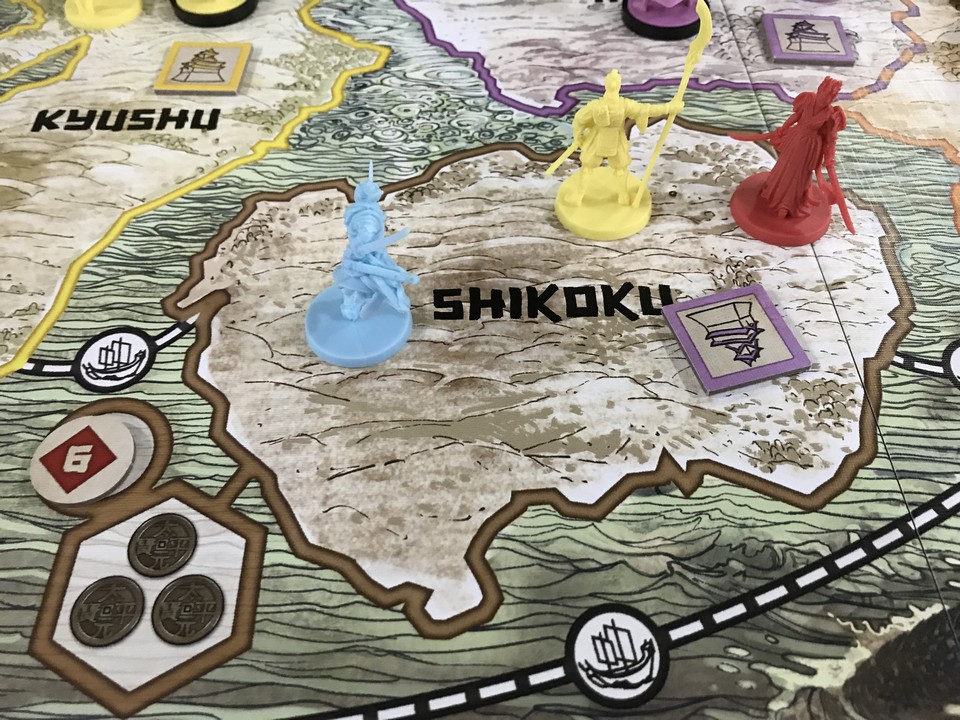 Honor! Coin! Diplomacy! These core mechanics tie the game together tightly. You have to be careful of what your actions will do! We’ve already covered an overview of the rules here so I’ll cut to what really stands out when you play Rising Sun.

Honor is important! Victory points may let you win but honor let’s you steer the course of the game. Even from the start, your clan determines how high your honor starts at. Your clan ability is tied directly to how honorable your clan is. Honor rankings decide ties and ties can mean life and death in coin and war.

Coin management is key! Coins allow you to build new strongholds and buy powerful cards… but coins also decide combat! There are 4 battle actions once combat has begun and players must bid for each battle action. If you summon ronin allies, you also prevent your enemies from summoning their own ronin! But in turn, winning combat means the losers will get whatever coin you used. Future battles can be swayed by prior battles!

Diplomacy can end battles before they happen! Alliances aren’t just important to stop combat. Alliances also mean bonuses if your ally decides to take an action. Each turn, players get to decide which action everyone will do this turn. Additionally, the player who initiated the said action will usually get an added benefit… INCLUDING his ally! Getting additional recruits or building strongholds just because of your alliance is very important! But having an ally means using the Betray action will lower your own honor! Everything is connected!

A game round explained 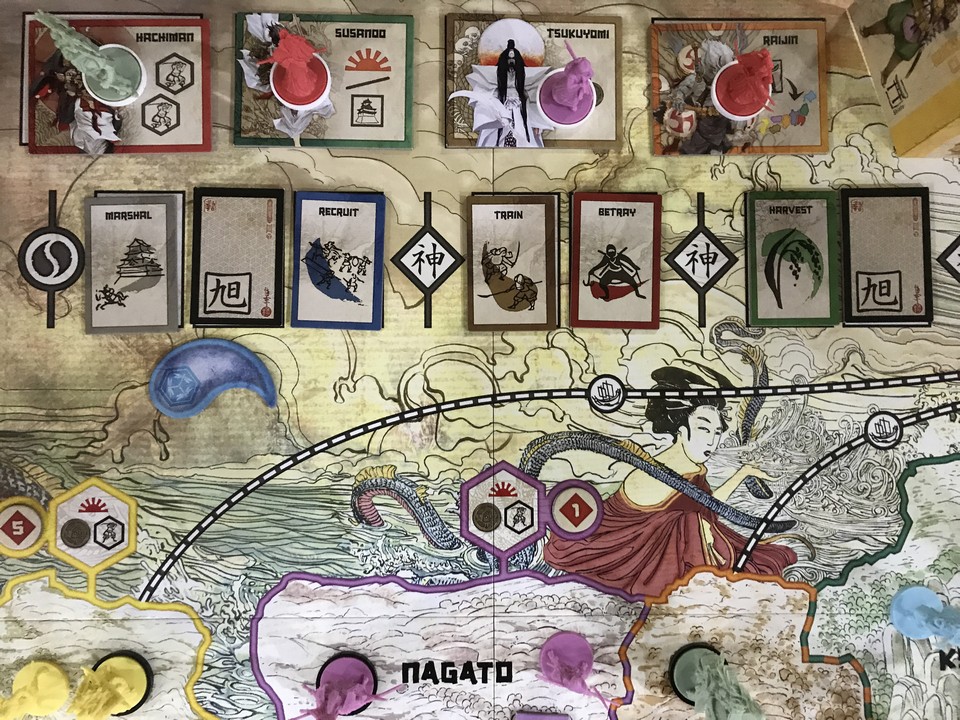 Each season is a round! Rising Sun takes place over the course of a year with three seasons at play: Spring, Summer and Autumn. Going through a season can be pretty quick with just a few actions available but each player may take a lot of time just analyzing the board.

We start with the Tea Ceremony! Determining allies can be very simple or very complex. It all depends on who you’re playing with! Are you playing with people who want to optimize their actions? Or are you playing with opportunists who aren’t afraid to take an honor loss to Betray and take board advantage? Alliances are always something to think about during this opening salvo!

The Political Phase is the meat of each season! There are only seven actions available so whoever starts the season will have an advantage of an extra action! Each player will choose an action and everyone will partake in the action. If you’re in an alliance, your action and your ally’s action will have a bonus! Each action is a precious resource so plan accordingly!

Finally, the War Phase closes the season! Each region will check for combat in order. An earlier combat has a high chance of affecting future combat if a lot of coins were used! Players bid their coin to be able to take a war action. Only one player can take each action. A superior can prevent a weaker player from attempting seppuku if he has the coin for it. When a victor is decided, the victor distributes the coin he used in that battle to the losers. This can turn the tide of future battles dramatically!

Does it all work together? 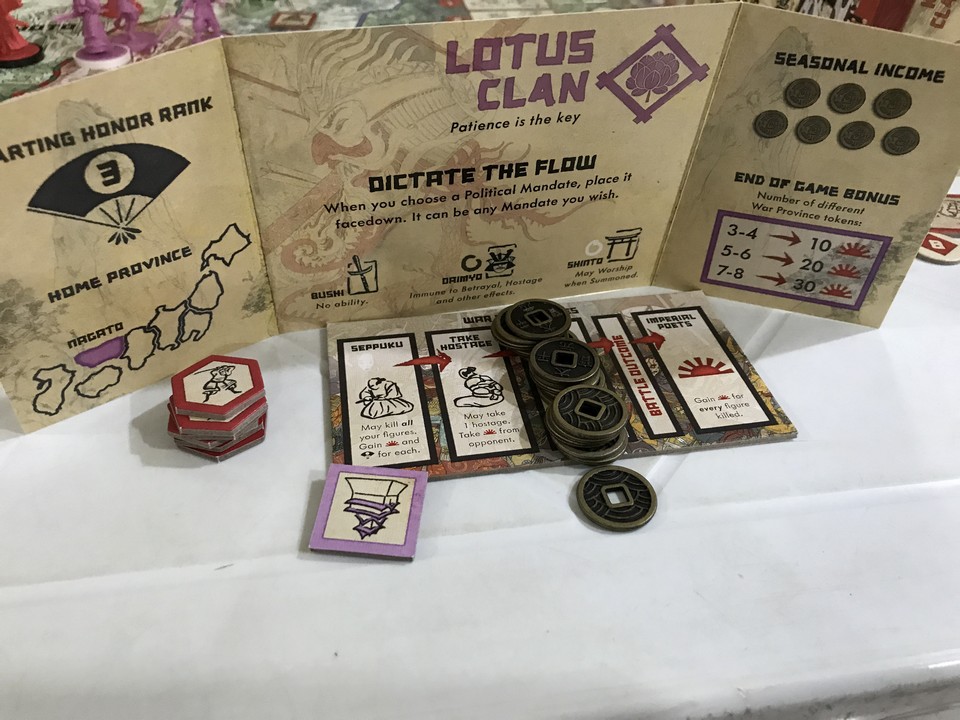 There are a lot of interconnecting parts in Rising Sun. There are a variety of ways these connected parts generate Victory Points. There is the Harvest action during the Political Phase that can generate some precious VP for you and your ally. You can even petition certain Kami for VP or purchase special cards to grant VP. Winning combat outright doesn’t grant a lot of VP. Otherwise, at the end of the Autumn season, the Winter final scoring can give VP for how many separate regions you’ve conquered.

All in all, does Rising Sun’s design pull it off? Yes. Rising Sun’s design works well enough for all the elements to act in harmony. But it will all depend on the group you play with. A lot of the math in the game assumes all players are looking at other players’ positions very carefully. Is your group looking for blood and a fun time? Is your group looking to number crunch the best source of VP? Your group’s enjoyment of Rising Sun will hinge on the players around the table.

Rising Sun is a solid game. All the mechanics work well and it’ll show itself off in how someone wins at the end of the game. Will this game replace Diplomacy or Blood Rage? Probably not as this is a very different game altogether in terms of experience and pacing. But Rising Sun is still definitely worth the experience for the time played.

Have you heard about Rising Sun’s Kotahi? Click here for the inside scoop!

For more about how Rising Sun plays, click here for Ungeek’s overview of the game!

Rising Sun has it all and more. The mechanics from diplomacy to combat work in unison to provide a clean experience on the board. Bring friends that're open to diplomacy and betrayal and you'll have a great time in Rising Sun. If you're expecting Blood Rage though, then you might get disappointed as this game has it's own pace and experience.Rising Sun Board Game Review | Truly Bright and Brilliant!