April ain’t fooling around with this upcoming line-up of games this month! 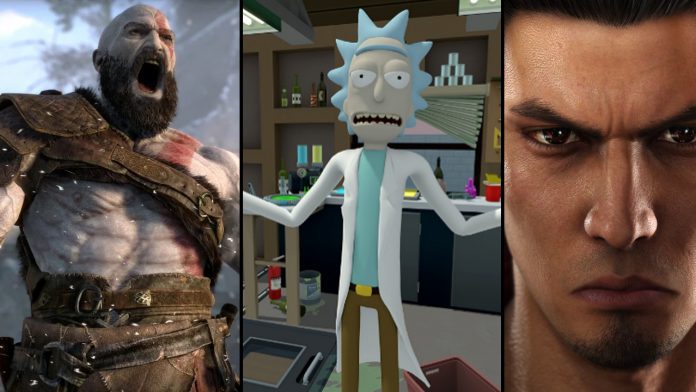 Not too long ago March gave us a lots of title to play with like Far Cry 5, Agony and  Assassin’s Creed Rogue: Remastered but now its April and, this month, we have series making a return and lots of new interesting indie titles! We’re super excited so let’s take a look at what this month has to offer.

Right off the bat, we have Penny-Punching Princess by NIS America, an interesting twist on RPG gameplay. Play as Princess or Isabelle as you punch or slash your way through waves of enemies or just simply harness the power of money and bribe them to take your side like a true aristocrat.

Next, we have Minit – an indie title made by the collaboration of various indie creators (Kitty Calis, Jan Willem Nijman, Jukio Kallio & Dominik Johann). This peculiar game starts off when the main character picks up a cursed sword that curses anyone to have a 1 minute life which starts all over again. With many Legend of Zelda references and an art style like Undertale, Minit is something to watch out for!

This JRPG by Compile Heart is finally arriving in PC this April. Lead an elite force to protect humanity from dangerous creatures that infects humans with a deadly virus and try to uncover who’s the traitor among your team before it’s too late.

Play as Avil, last of the Sentinels, who protects mankind from the malevolent Ravenii, an army of Towering Ogres and their bloodthirsty minions. This game by Iron Galaxy offers an interactive environment and a gameplay akin to Shadow of the Colossus.

Yet another indie title that is arriving to the major consoles from our list is Regalia: Of Men and Monarchs developed by Pixelated Milk. You will play as the inheritor of a far, far away kingdom but, unfortunately, you find out that it’s now drowning in huge debt and is plagued by bandits, rats, and monsters! It’s up to you to return your kingdom to its former glory.

Join and fight other players in this ship-vs-ship game by Gunpowder Games, LLC. Be the Captain of an Orc, Dwarf, or Human warship and set sail to the harsh seas. Watch out for those who lurks below the deep sea!

This highly-praised game will now arrive on Xbox One this Month! This grim tale follows Senua’s struggle to reach Helheim and find the goddess Hela in hopes to save her lost love. All this, while she fights off the voices in her head.

This April list is brimming with indie titles. By Infinite State Games, Rogue Aces lets you control your plane and battle for air, land, and sea supremacy plus collect upgrades for your aircraft to challenge even more missions. With over 100 randomly generated missions and more game modes, Rouge Aces might keep you company for quite a long time when it releases.

The wait is now finally over as the Dragon of Dojima is now back!! Play again as Kazuma Kiryu as he tries to figure out what happened to Haruka who is now in coma and protect her newborn child named Haruto that is targeted by the other clans. Worldwide release is at April 17!

The newest entry to the God of War series will finally land this month! Once again, you can play as Kratos and this time, he has to look after his son Atreus as he ventures to a new world where the Norse Gods rule. You can click HERE to see our first impressions!

Nintendo’s new attempt for interactive gameplay took the form of cardboard cut-outs that build into various objects. Two separate kits are going to be available this month – the Variety kit (you can build various toys such as a piano or a fishing rod) or the Robot kit where you can build your very own Mecha suit and beat that Gundam Cosplay Guy. Coming this month.

Come on and grab your friends… cuz its Adventure Time!! Join our heroes Finn and Jake as they try to save the Land of Ooo from pirates that submerged the world under water. Play as fan favorites Marceline and BMO in this new Adventure Time story.

A social survival simulation by 11 bit studios in a cold-stricken world. Rule the people and face choices that will leave an impact on how you rule your people. Will society triumph or will succumb to the harsh cold?

The eccentric rail shooter by Inti Creates will finally have an international release. The player takes the role of male student Houdai Kudoki to shoot his female classmates with “Pheromone Shot” while he finds his “True Love”. Shoot high school girls when it arrives on the Switch and PS4 this coming April 24.

It’s finally coming to the Nintendo Switch! South Park: The Fractured But Whole lets you once again assume the role of the New Kid along with the South Park cast to fight the crime that lingers in South Park as its very own Superhero team!

The well-received turn based RPG by Red Hook Studios will finally have a PS4 and Nintendo Switch port. Recruit, train, and lead a team of flawed heroes through twisted forests, forgotten warrens, ruined crypts, and beyond. Players can even enjoy its additional content all bundled in this edition of the game.

A unique adventure by onebitbeyond where you play as a different kinds of heroes of legend. Wander around the land and fight against the evil Mormo. The game uses a “legacy system” that affects the gameplay for each deeds, successes, and failures of heroes that came before, which will leave an implication on the next hero depending whether it’s good or bad.

Developed by 13AM Games, this platform racing game zooms to the PS4. Try to dodge obstacles and reach the goal while competing with other players online or locally.

Wubba lubba dub-dub! Rick and Morty fans can now finally experience what it feels like to be a Morty clone as you explore Rick’s garage, visit alien worlds, and dive into wacky adventures! All of this and more in this VR simulation of the hit cartoon.

The new entry to the long-running Super Robot Wars franchise will now get its international release with new mechas added to the roster from various series like Gundam: Reconguista in G, Buddy Complex, and more! Expect tons of epic mecha battles!

This Dark Souls inspired action-RPG by indie developer DARK STAR gives a twist to the table as you get weaker every time you defeat a boss. With its gothic design and dark storytelling, the game promises a thrilling experience.

If you have played MechWarrior before, you’re not wrong to get excited from this new entry by its original creator Jordan Weisman. Take command of your mercenary group in this turn-based combat where you try to survive a brutal interstellar civil war or battle it out with other players online.

Join Adol in this epic adventure as he unravels the riddle of the cursed isle and the blue-haired maiden Dana while fighting many foes and keeping other villagers safe. Coming soon this month.

Excited for the upcoming releases? Keep it here at UnGeek for more gaming news!

- Advertisement -
Previous article
2018 belongs to the gamers! ASUS ROG announces refresh models for their motherboards!
Next article
Everything You Need To Know When Monster Hunter: World Spring Blossom Festival Hits This April 6th!