TGS is a shopping paradise for geeks everywhere! 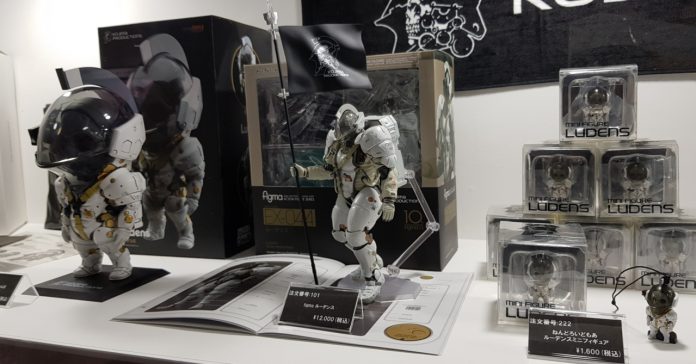 Tokyo Game Show 2018 is paradise for gamers everywhere. Not only are there massive booths, demos, and photo spots at the venue.TGS is also the best place for gamers to buy the coolest gaming and anime merch! 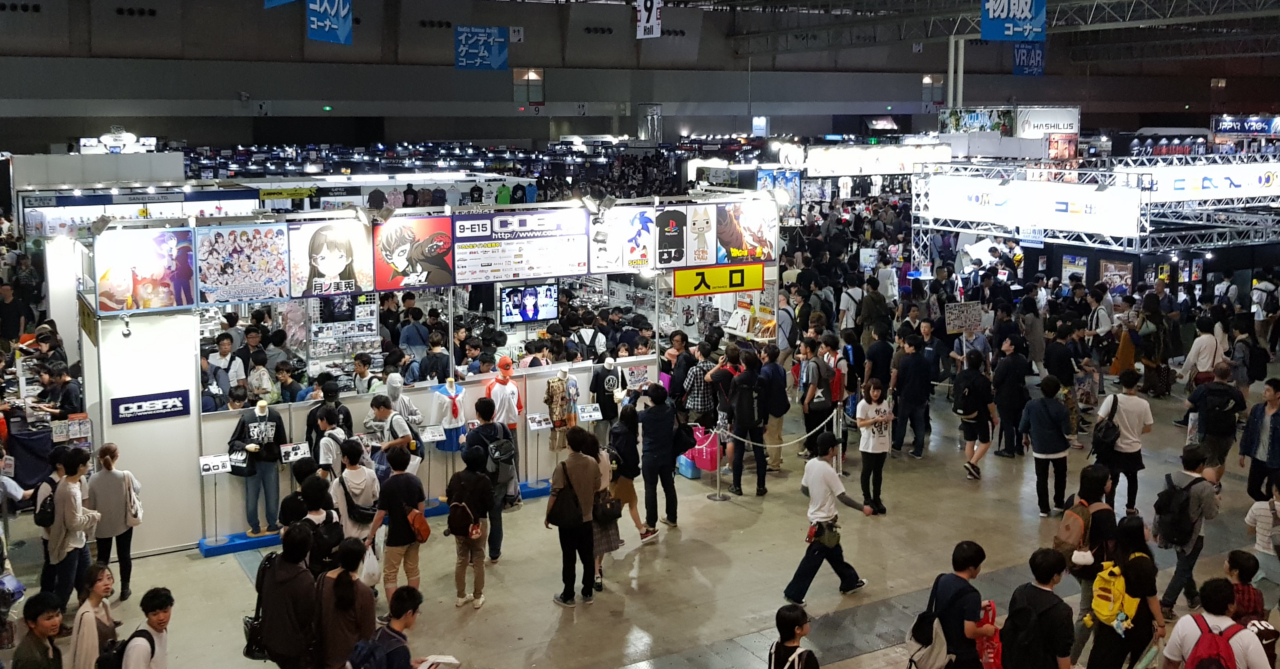 This year’s TGS features a dizzying array of items that made our hearts skip a beat and our wallets weep. Thankfully, all the merch booths are located in one area — Hall 9-11. From gaming-themed t-shirts to cute collectibles, here’s a look at all of the best stuff that we found Tokyo Game Show 2018: 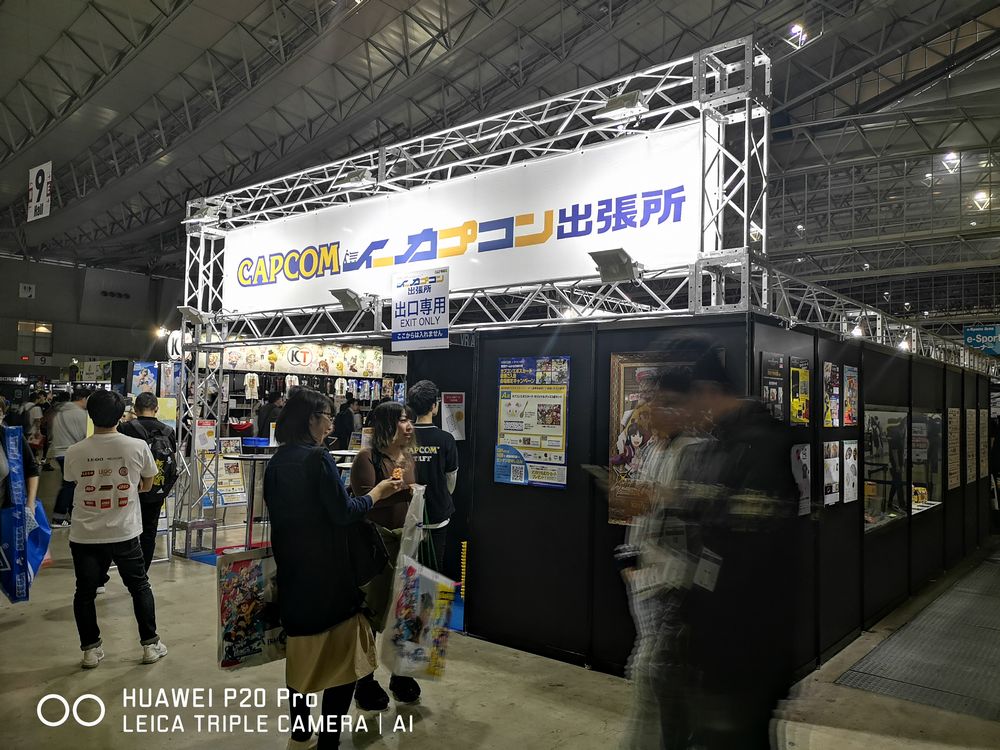 At the middle of the merch area stands the Capcom store, and it’s filled with lots of awesome goodies from the publisher’s numerous titles.

If you’re a big fan of the Resident Evil and/or the Mega Man series, prepare your wallets. The TGS Capcom store has a ton of exclusive merchandise such as t-shirts, jackets, caps, mugs, keychains, mini figures, and many more!

What also caught our eyes at the Capcom Store was the minifigs of monsters from the mega-hit title, Monster Hunter World. Figures include monsters such as Nergigante, Diablos, Great Jagras, and Pukei-Pukei. Though if figures aren’t for you, there are more MHW goodies such as mugs, fans, and more! 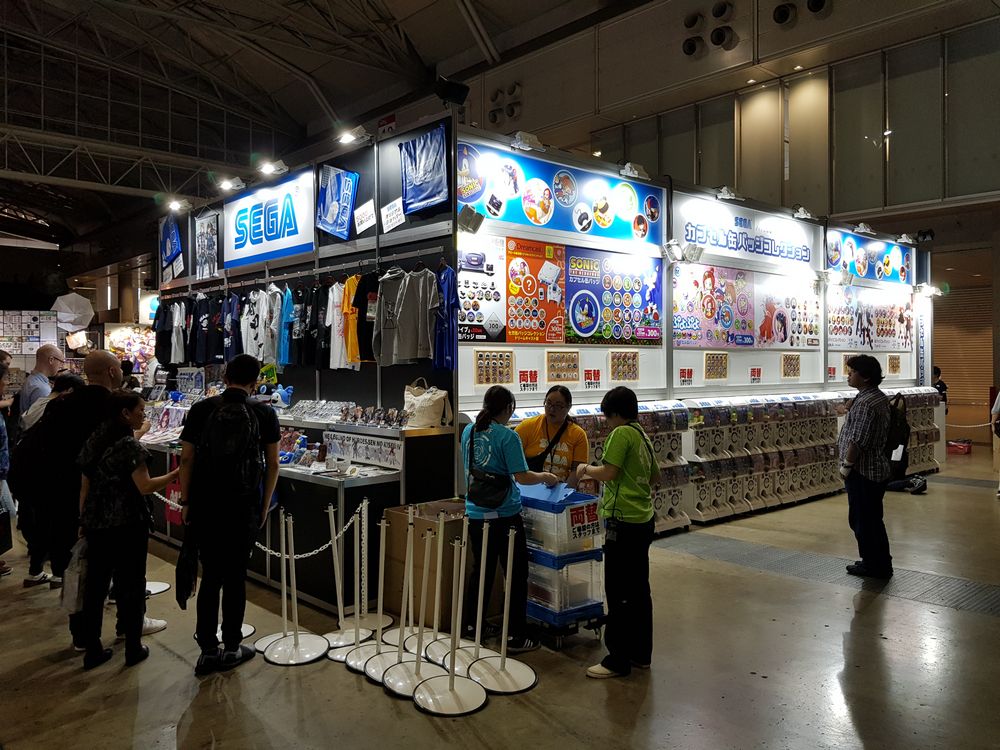 Beside Capcom is a store from another heavyweight Japanese developer/publisher — Sega. The Sega TGS store not only has merch from the company’s various franchises, it’s also home to a sizeable Gashapon collection!

Fans of Sega games such as Persona were treated to super-cute plushies, tees, and accessories. There are also shirts and other merch for loyal players of retro Sega consoles such as the Mega Drive and/or Dreamcast. 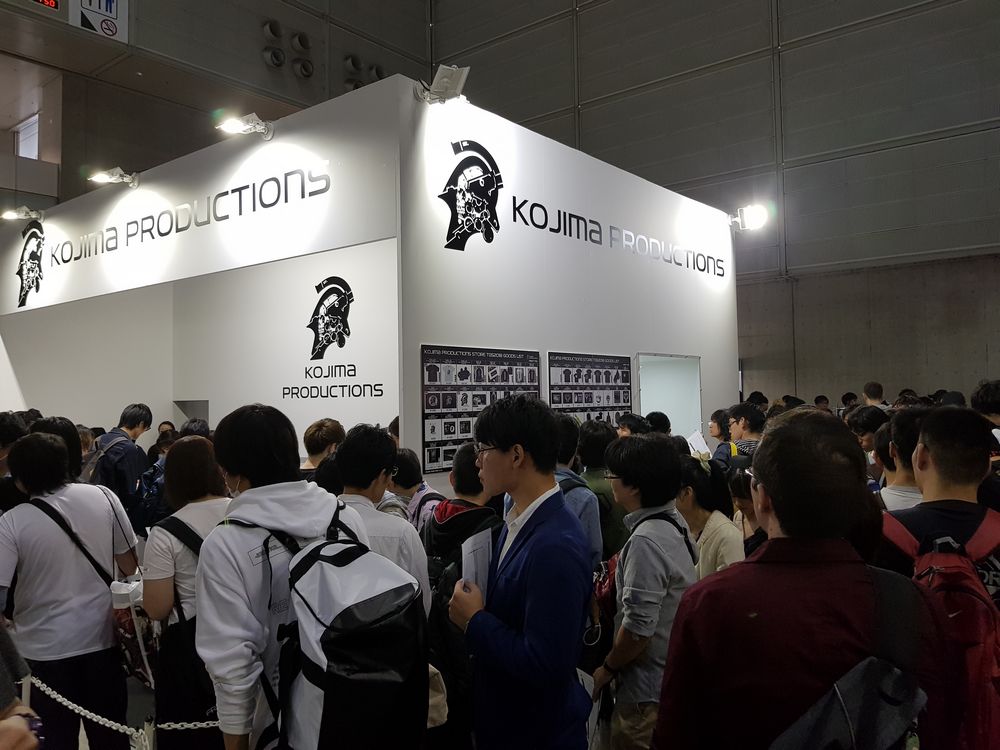 Unlike Sega and Capcom’s various game titles, Kojima Productions doesn’t even have a single game that’s out now. But that doesn’t seem to matter, as KojiPro has a merch booth filled with goodies that are sure to be must-buys for fans of Hideo Kojima.

In the KojiPro booth are t-shirts along with high-quality metal phone cases, key rings, and other accessories. These items either have a Kojima Productions design (complete with mascot Ludens) or a Death Stranding print. There’s even wacky merch such as a “VOID IF TAMPERED” tape, which should be familiar to those who’ve watched the Death Stranding trailers. 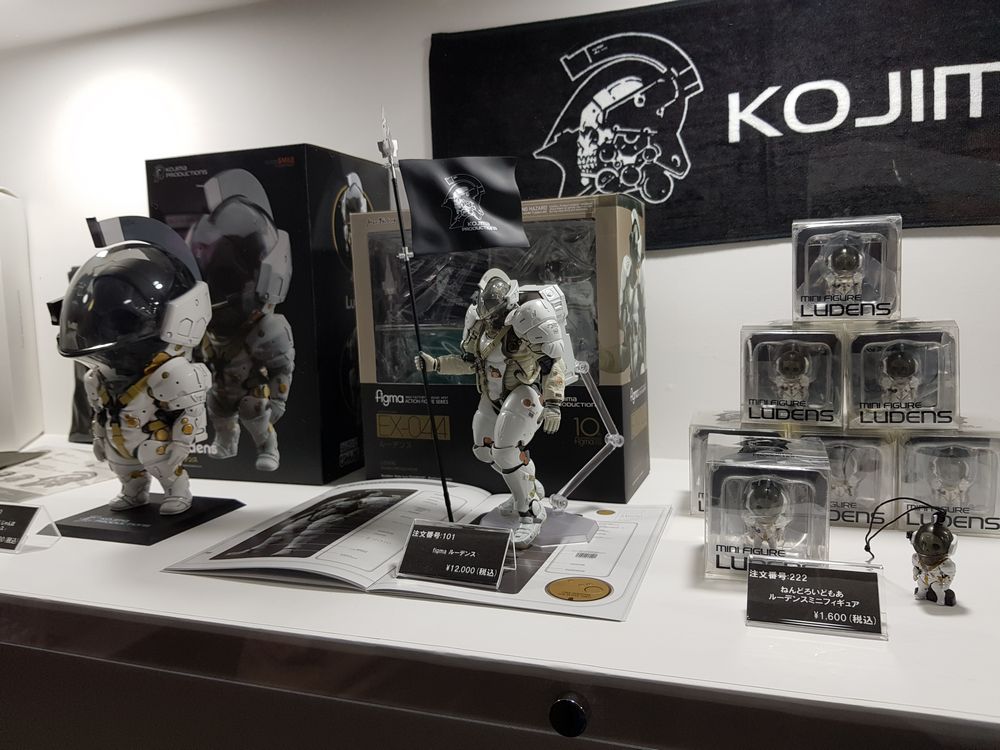 Though the highlight of the KojiPro merch booth is no doubt the collection of Ludens figures. Ludens (the KojiPro mascot) may not even be in an actual video game, but his design is just plain awesome! It also helps that the character is designed by Kojima’s art director, Yoji Shinkawa. 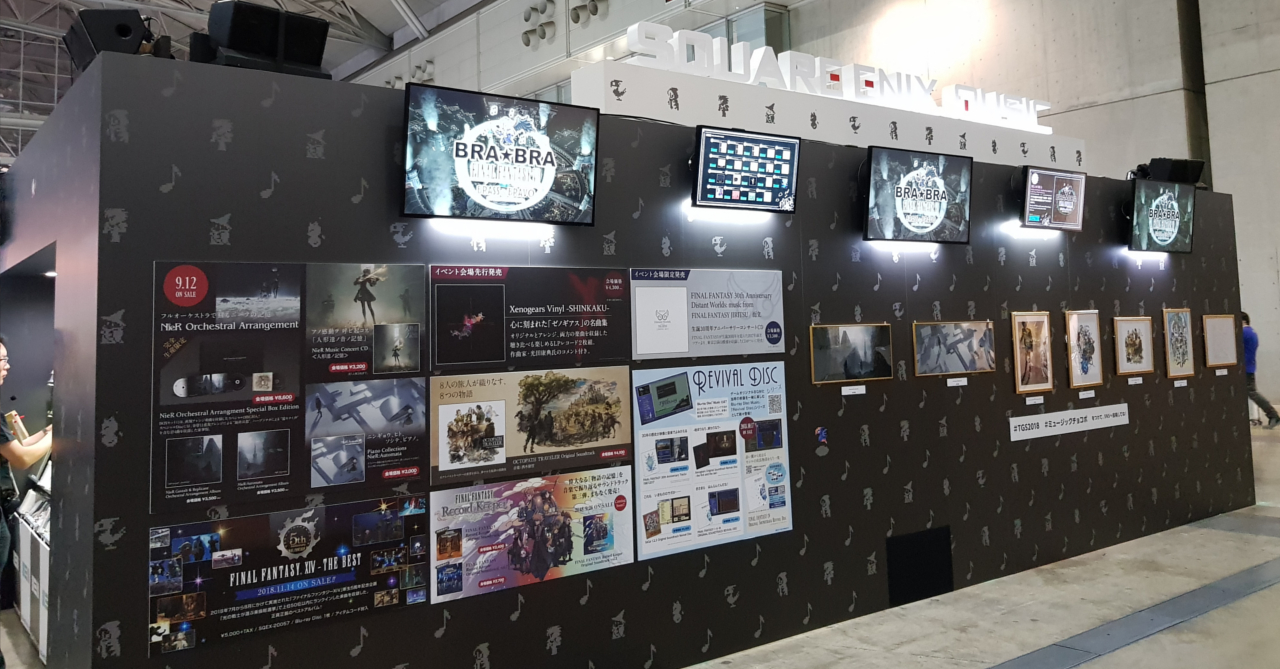 The TGS Square Enix Music store has both CDs and Vinyl Records with music from games/series such as Final Fantasy, Dragon Quest, Chrono Cross, and Nier: Automata. 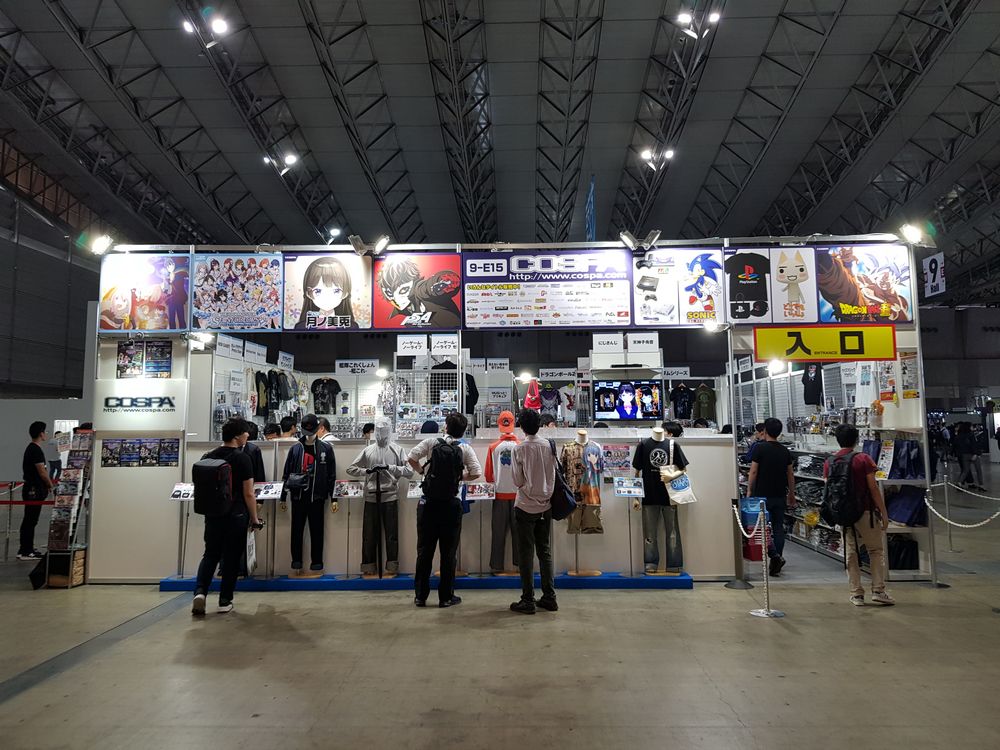 Big game developers/publishers aren’t the only ones with stores at TGS, Japanese “otaku” retailer Cospa is also at the convention. And as always, Cospa has lots of anime and video game-themed goodies!

This year, Cospa brought lots of anime gear from series such as Love-Live, Re:Zero, and even Pop Team Epic (the Pop Team Epic tee looks hella awesome btw). The Cospa store is also the place to shop for PlayStation fans; Sony may not have a TGS store, but Cospa has a wide range of official PlayStation products!

Near the Cospa store is a booth by Cassete Disc/Games Glorious. The said store is a retro gamer’s happy place at TGS, as the booth has t-shirts and pins for sale with retro game designs. 80s kids will definitely leave this booth with an empty wallet; just look at those cute retro pins or that Double Dragon t-shirt!

Aside from the stores I’ve listed above, there’s a ton more merch to see at TGS halls 9-11. Other booths that I haven’t even mentioned yet include Koei Temco, Good Smile Company, Pikatto Anime, and many more! 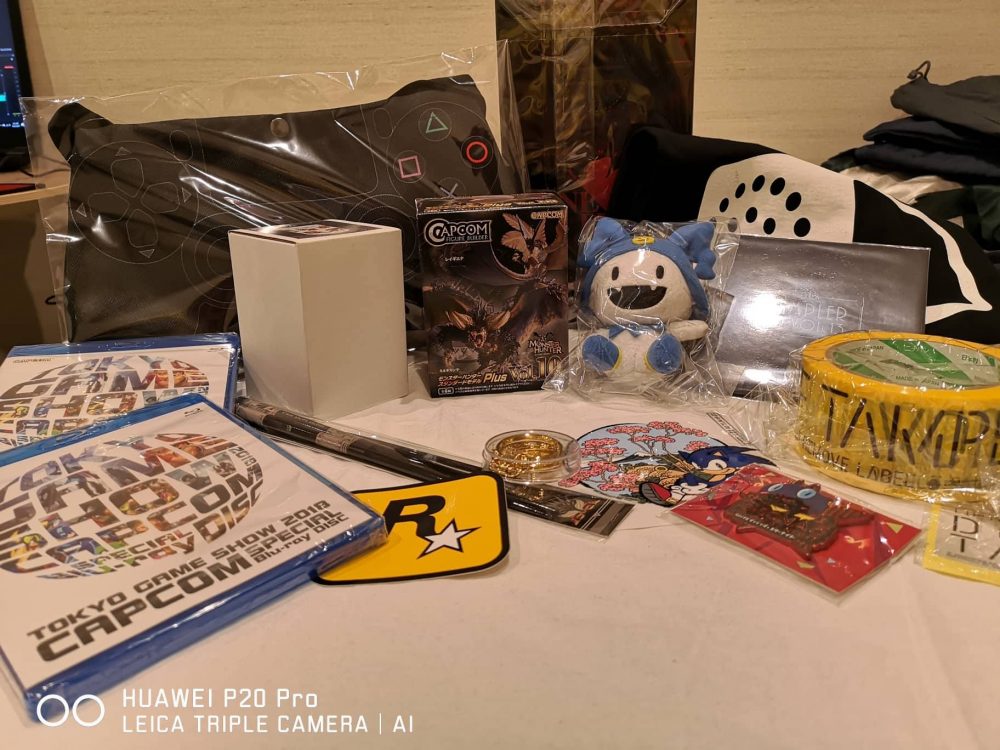 Tokyo Game Show 2018 is truly a geek shopping paradise! If you can, you should definitely visit TGS whenever September rolls around. If you can’t, don’t worry as we got you covered. We’ll be holding our annual TGS merch giveaway very soon so stay tuned!

P.S. The pic above is a sampler of the cool stuff that you can win in our upcoming giveaway!