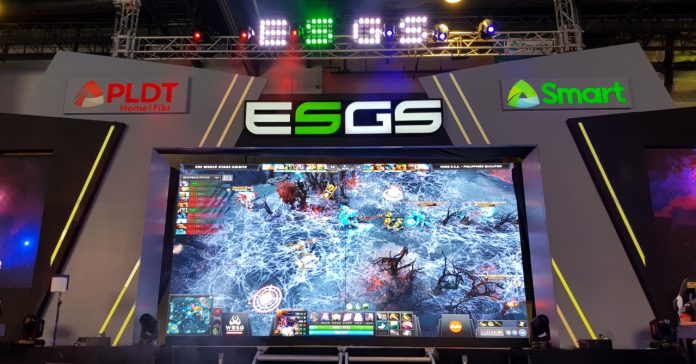 The event that every Pinoy gamer is finally upon us! ESGS 2018 is happening now until Sunday, and attendees are in for a treat. As with ESGS last year, this weekend’s event is filled with awesome booths and exciting activities ranging from the most hyped upcoming titles to cutting-edge gaming tech.

Now if you still need a bit more convincing, or if you won’t be able to make it this weekend, here’s a photo walkthrough of the awesome stuff that you can see at ESGS 2018! But first, here’s the event’s map just to show you the sheer scale of the event: 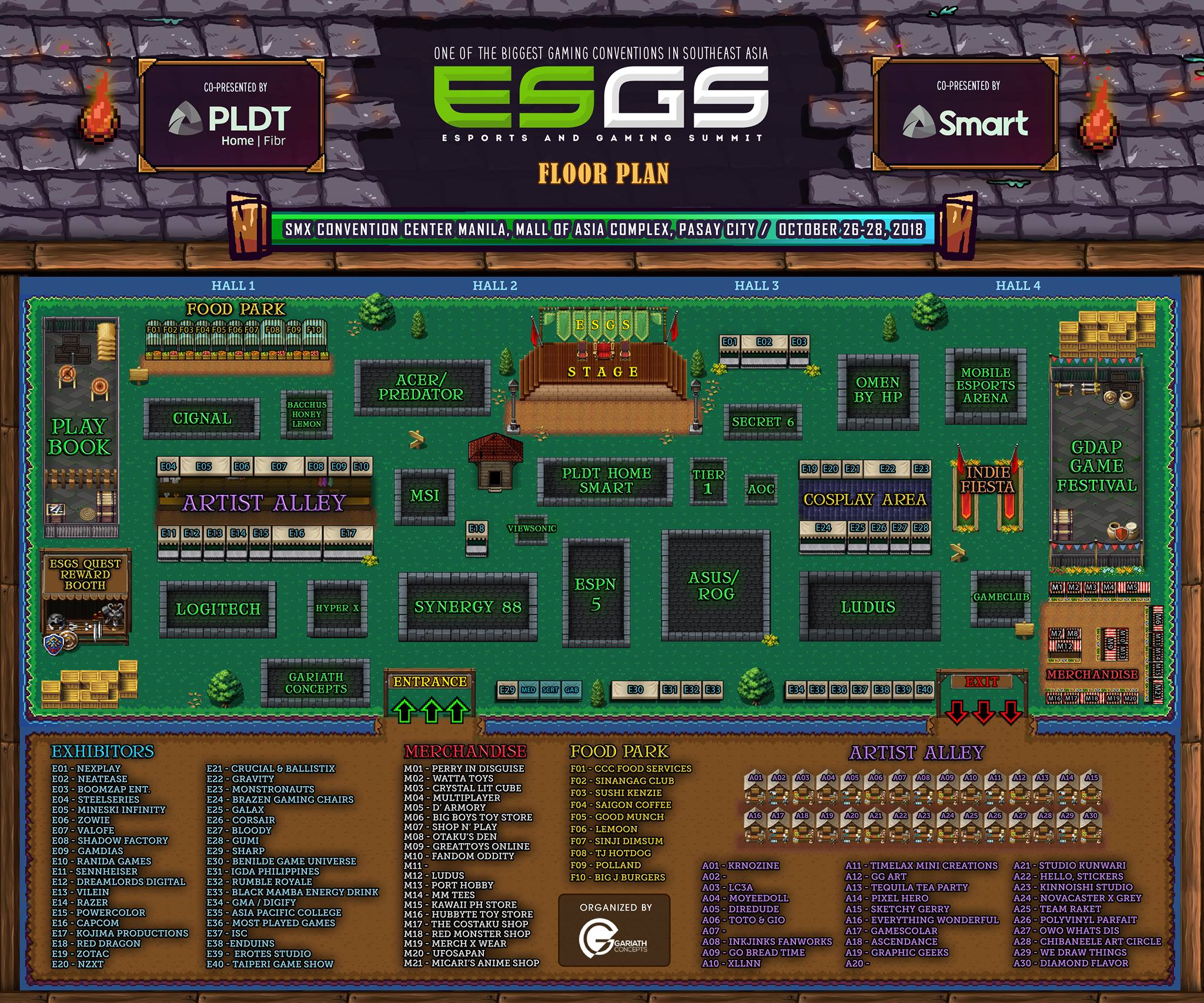 It’s a massive event right? That’s because this is the first time that ESGS occupies Halls 1-4 of SMX!

So are you ready? Let the photo tour begin!

First up is the ESGS merchandise booth that’s off to the left side of the entrance. Merch available include exclusive T-shirts, stickers, and an ESGS lanyard. 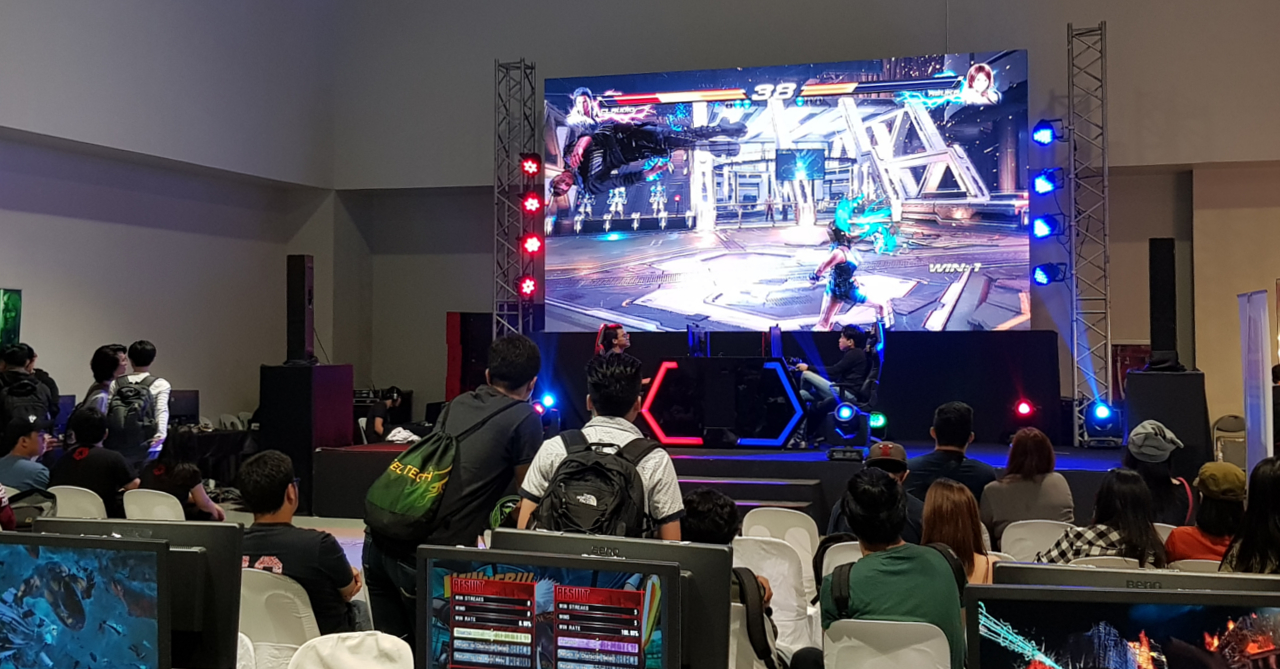 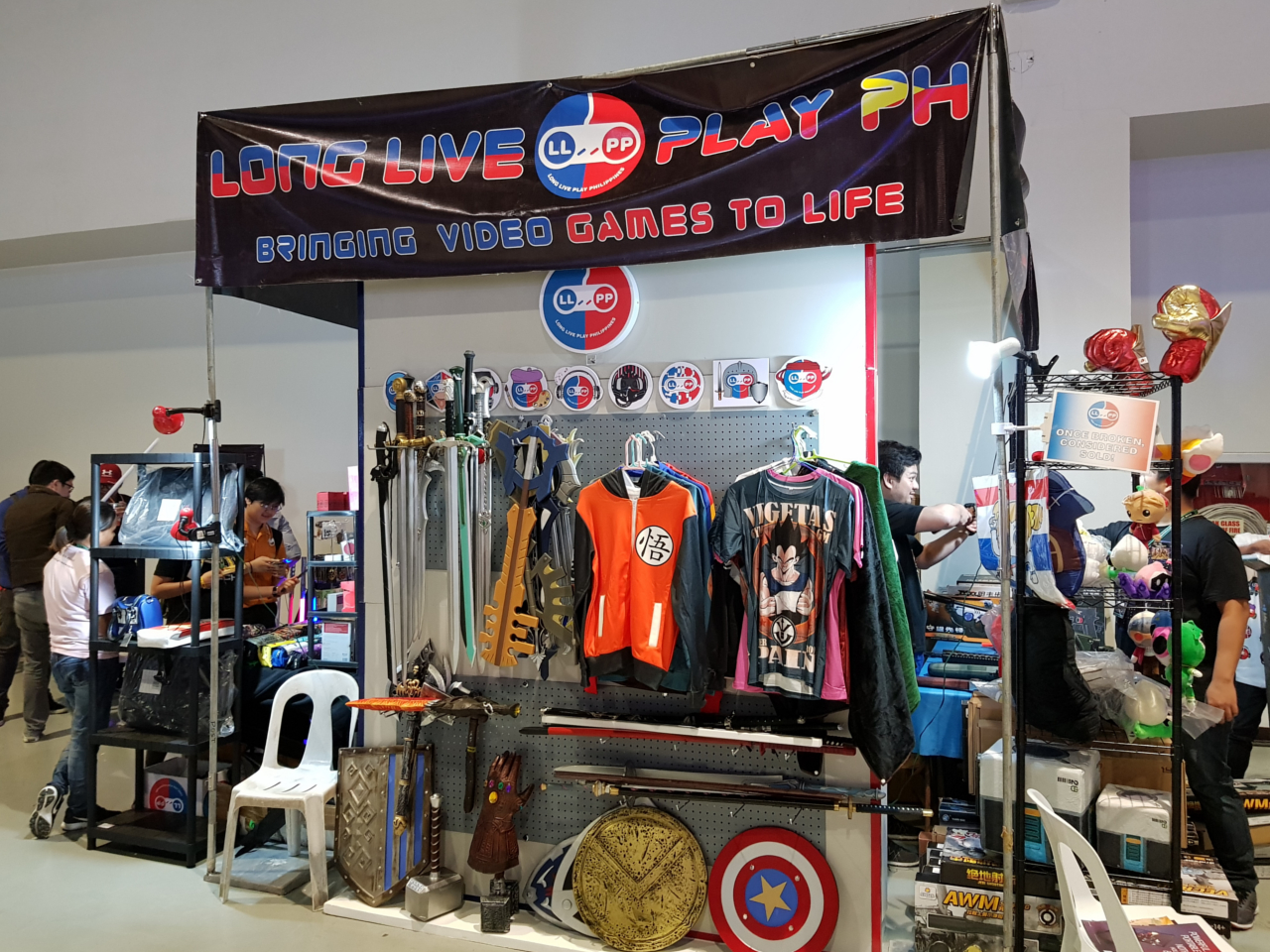 After watching or playing some intense fighting games, attendees can splurge on some awesome gaming-themed goodies courtesy of Long Live Play PH and it’s rather large ESGS booth.

Cignal is also present at ESGS once again, and like last year the booth offers fun activities and free-play opportunities for games such as Dota 2. 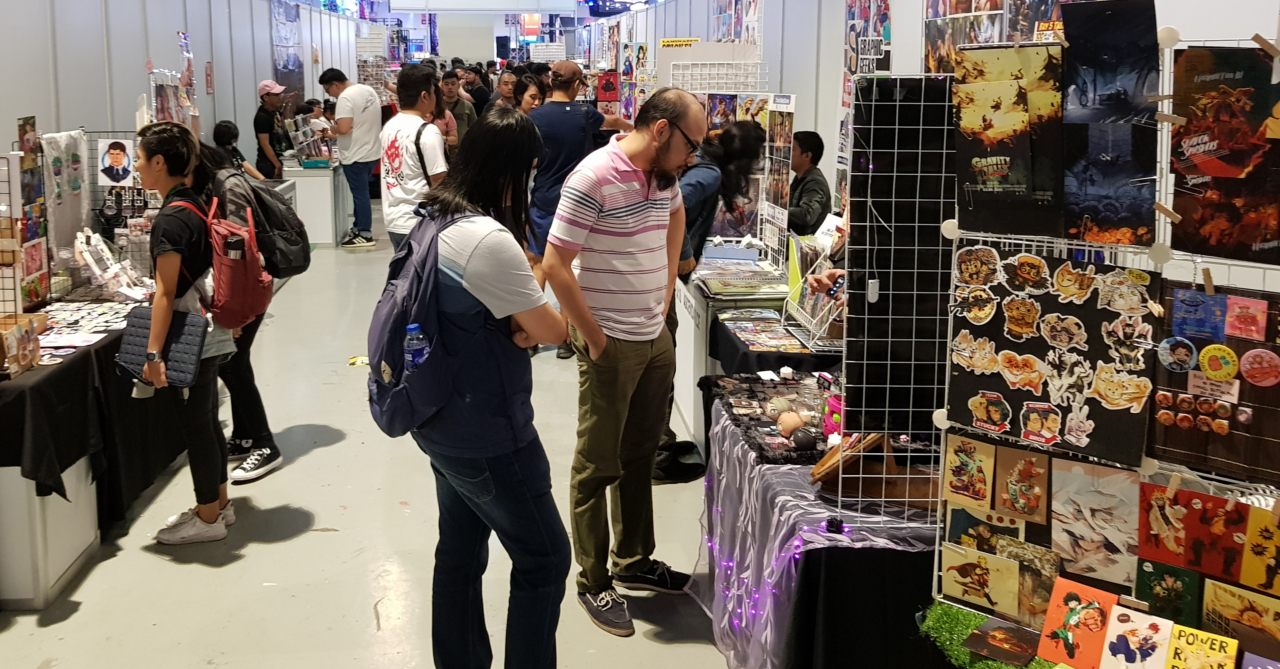 Just a few meters away from Cignal is the ESGS Artist Alley. The alley is a must for collectors of geeky art prints and other trinkets. 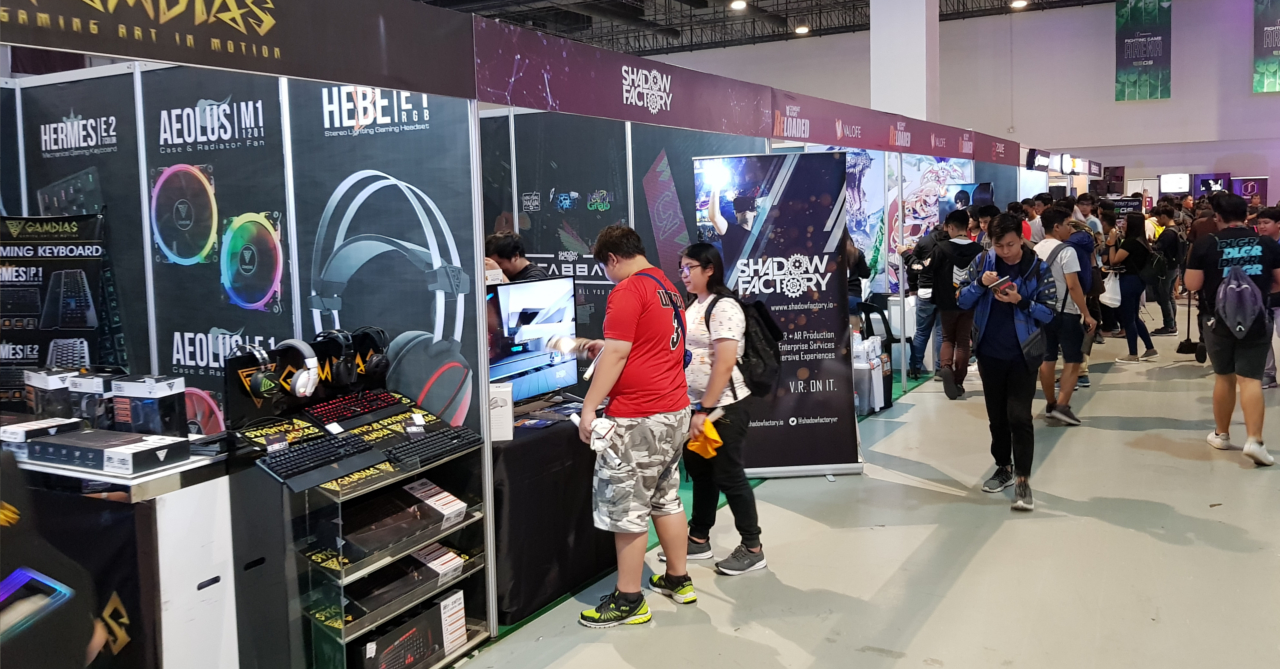 Flanking the Artist Alley is a collection of booths, with the front side containing various tech and VR brands. 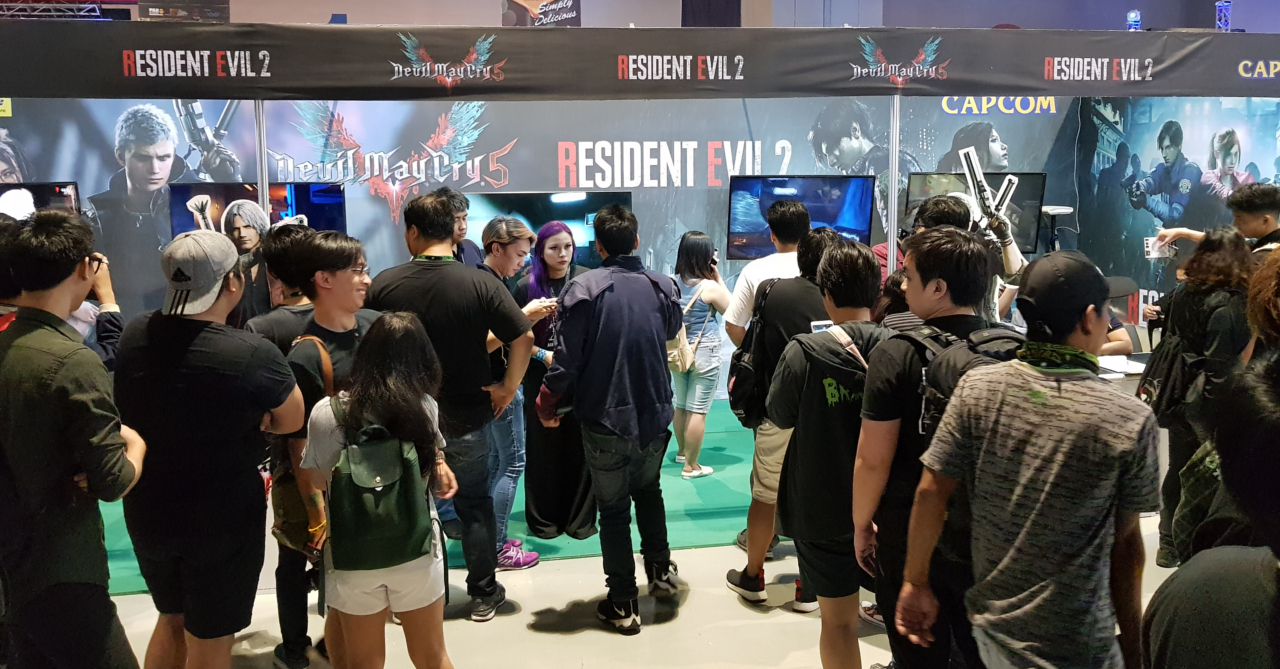 And below is Datablitz’s demo area which is probably ESGS 2018’s hottest booth for console gamers. Much like last year, Datablitz partnered with Capcom to bring exciting game demos for players; this year attendees can get to play Devil May Cry 5 and Resident Evil 2! 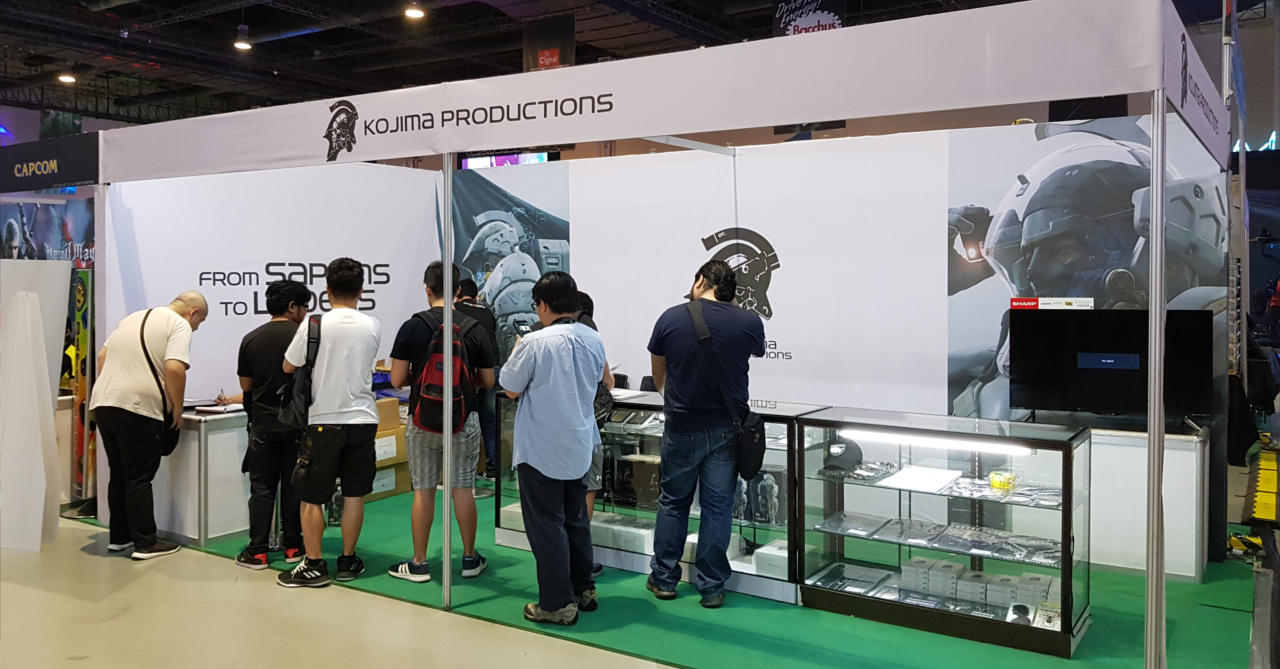 Beside Datablitz’s demo area is the Kojima Productions merch booth!

Now lets’ move on to tech at ESGS. Well-known brands such as Logitech and HyperX came out in full force with mini tournaments for esports fanatics.

Acer Predator brought out the big guns this year! The brand’s range of laptops and desktops can be played at the booth; though the biggest draw is no doubt the expansive VR Land on the booth’s second floor (yes, the booth has a second floor!). 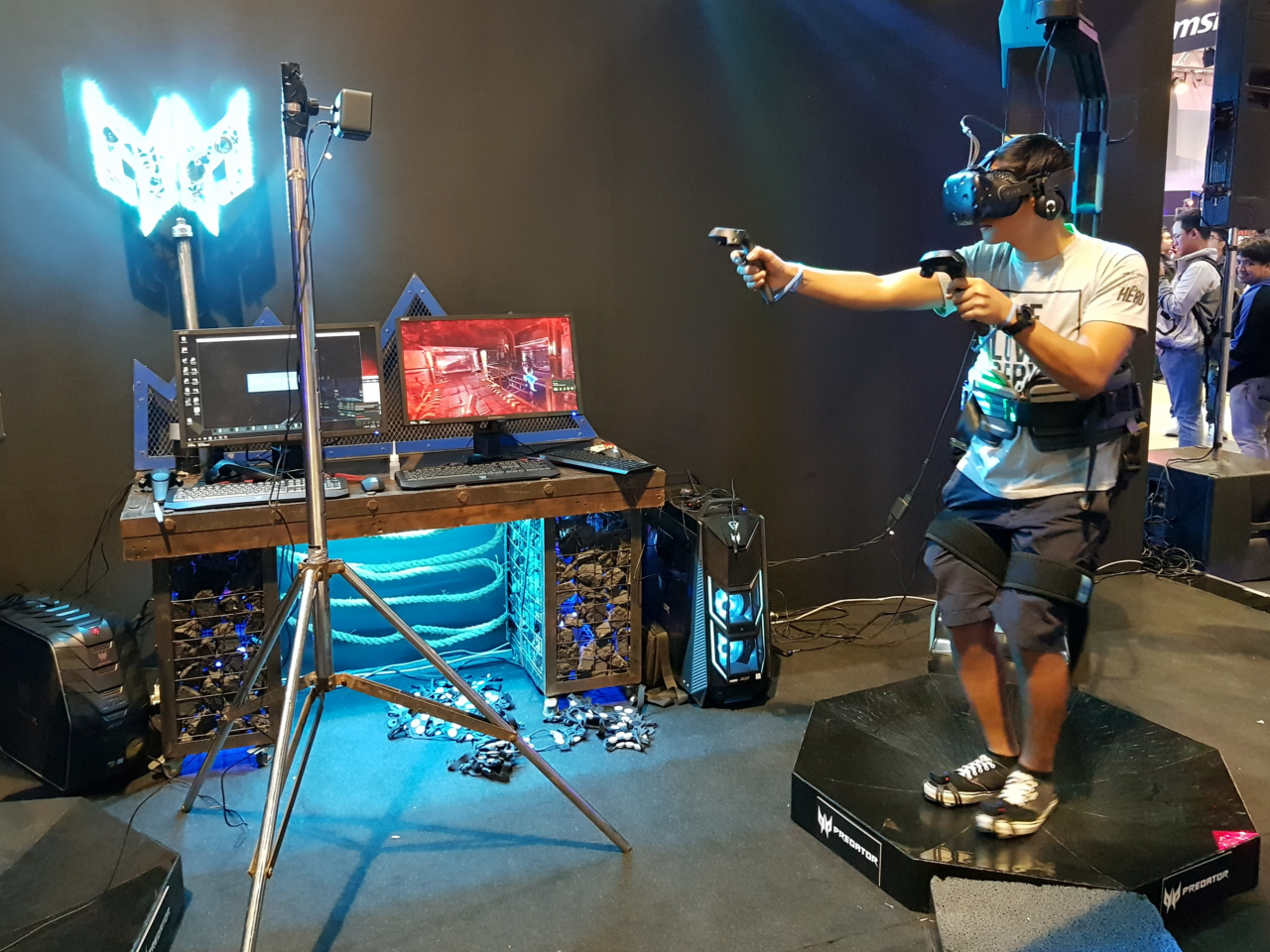 Predator’s VR setups are far from ordinary, as it even features a VR setup complete with harness for maximum immersion!

If VR isn’t your thing, you can head over to the MSI booth nearby. As a supporter of PC modders, MSI once again used ESGS as a platform to showcase the coolest PC gaming rigs in the PH!

Local developer Synergy88 is also at ESGS, but this year’s highlight from the company is Barangay 143, the first-ever Pinoy Anime series! 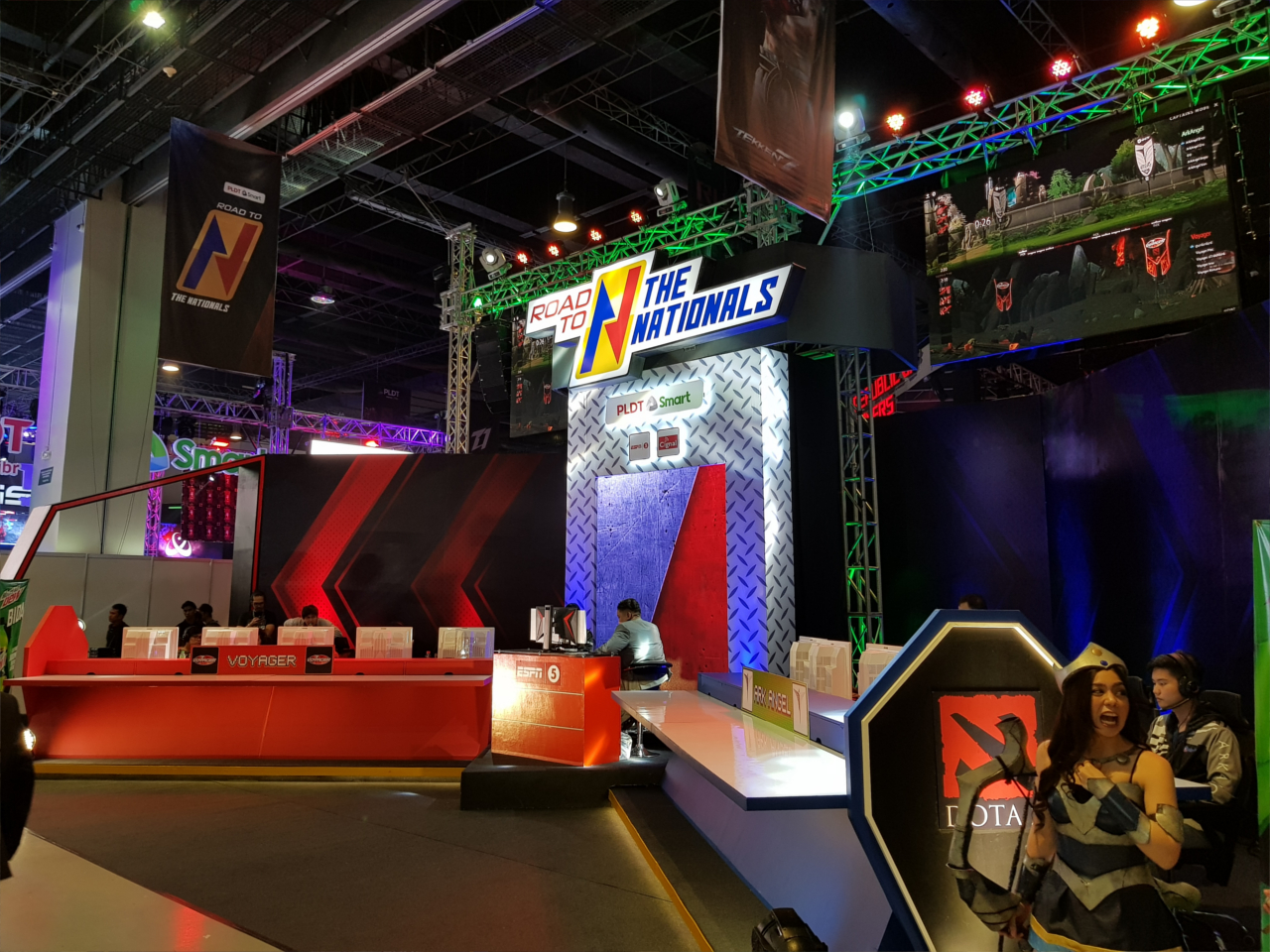 The ES in ESGS stands for esports, so it’s no surprise that there are tons of esports tourneys at the three-day convention. Probably the biggest one though is the culmination of The Road to the Nationals, and it has an insanely awesome setup at the event. 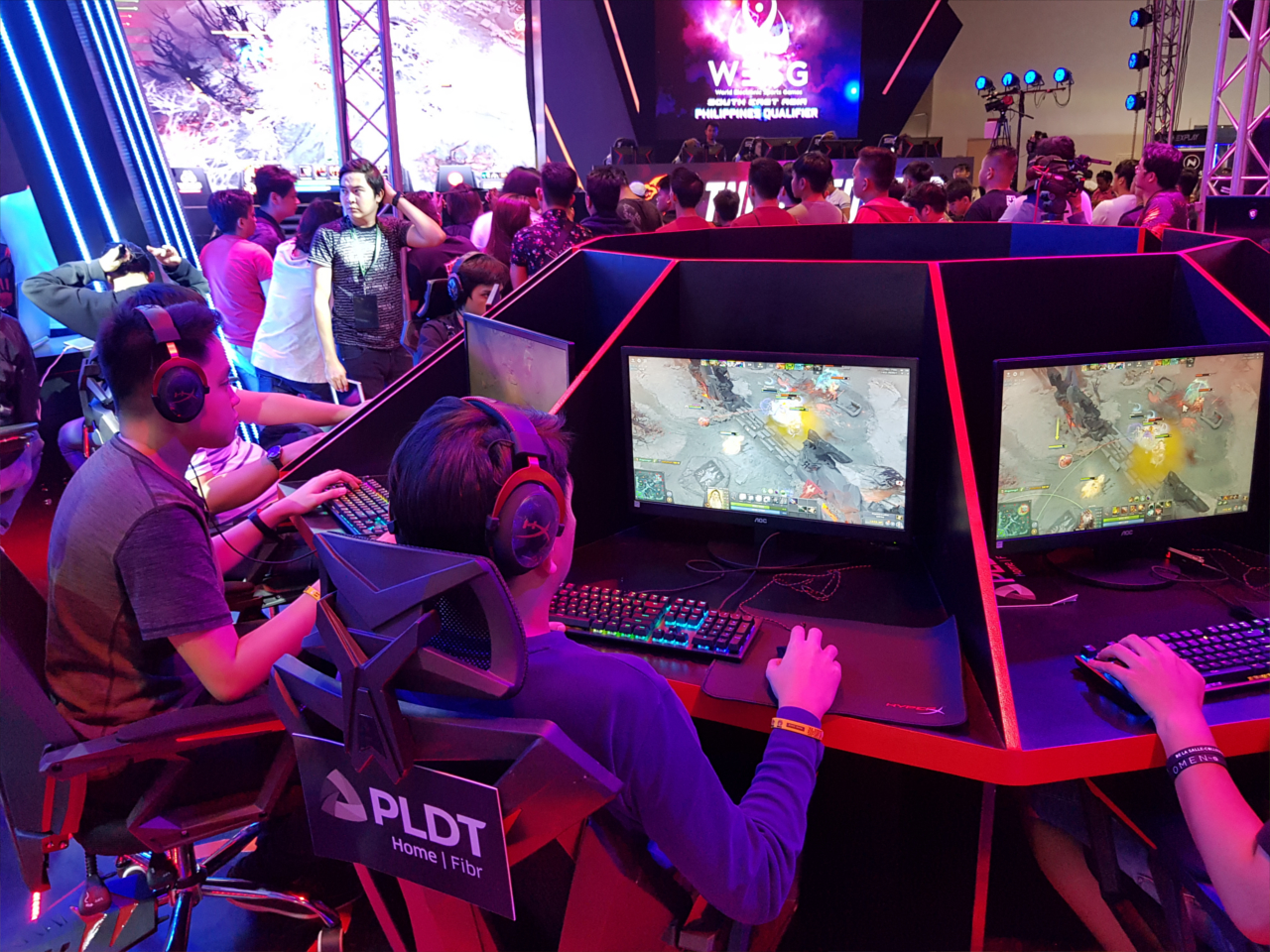 Moving closer to the event’s main stage we have the PLDT Smart booth. The booth lets attendees play a selection of PC and mobile games for free.

Now if you’re wondering where PlayStation is at ESGS, don’t worry as there’s a couple of PS4 title demos available to play at the PLDT Smart booth. It might not be as massive as the ones in last year’s event, but it does have a free demo of Astro Bot: Rescue Mission — and that’s all we need! 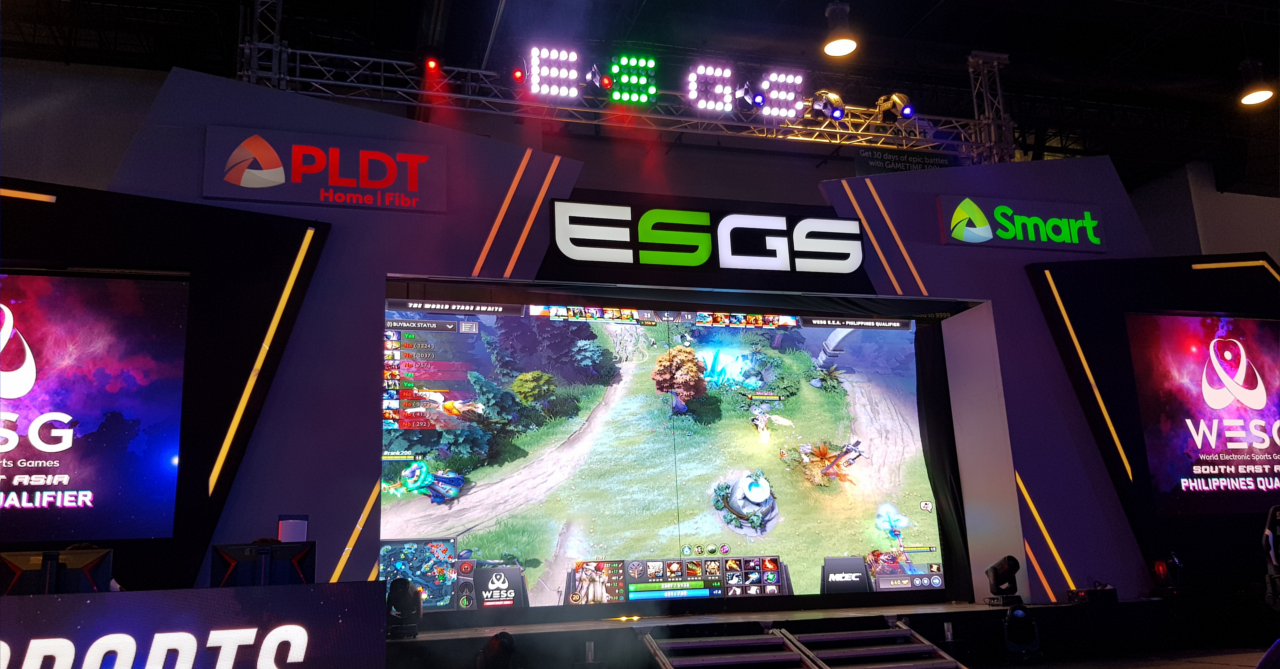 Now we’re finally at the main stage. ESGS 2018’s stage is back and better than ever, and it will again host numerous esports tournaments such as the WESG Philippine Qualifier finals. 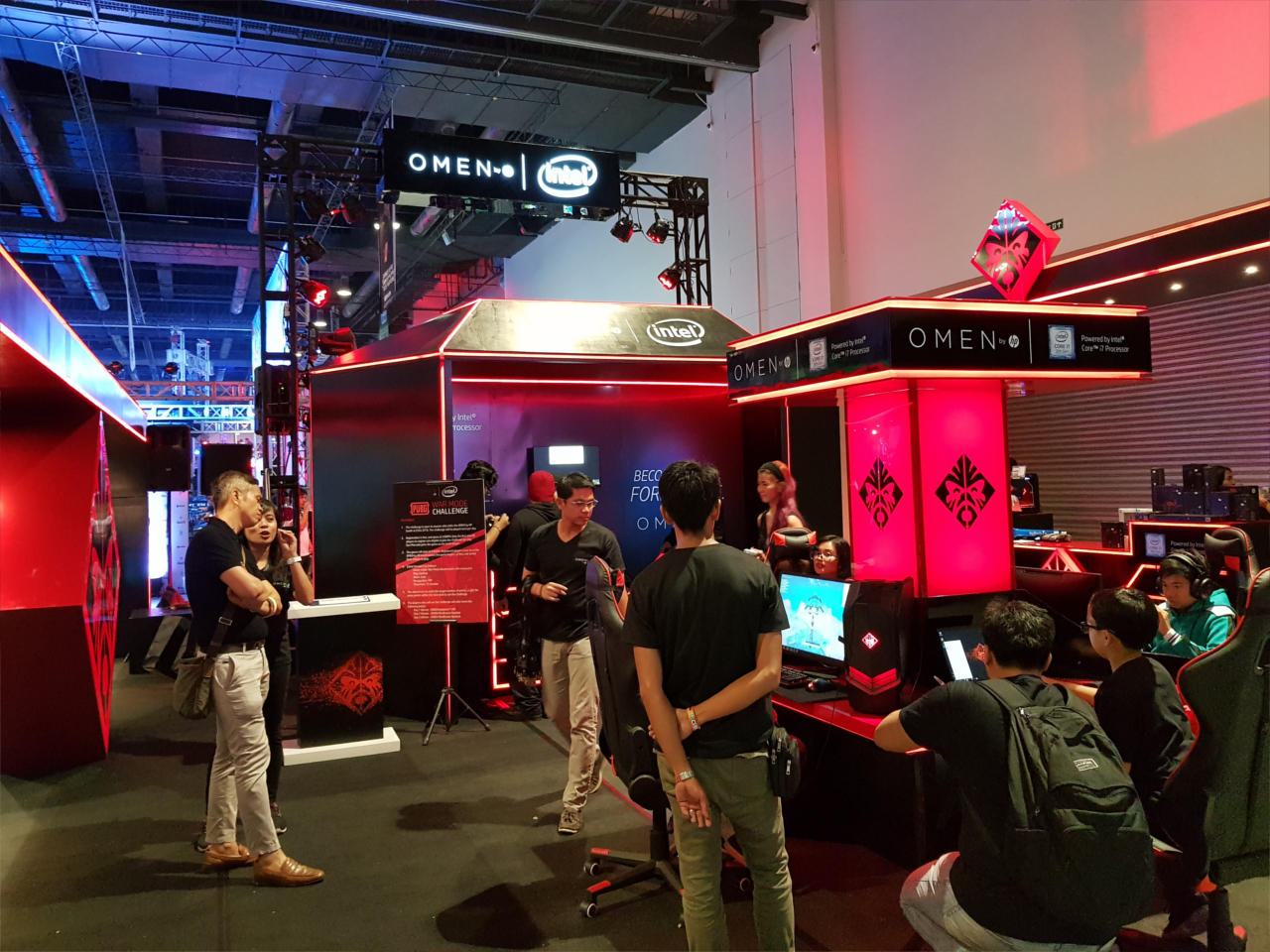 Beside the main stage is Omen by HP, another major tech brand with free-to-test and free-to-play game demos for attendees.

Lastly (for tech at least), ASUS Republic of Gamers brought out their best hardware at ESGS 2018. Not only are there a wide range of laptops and PCs that attendees can test out, the new ROG Phone is also available for a quick demo! So if your’e excited for the ROG Phone, here’s your chance to see it in the flesh! 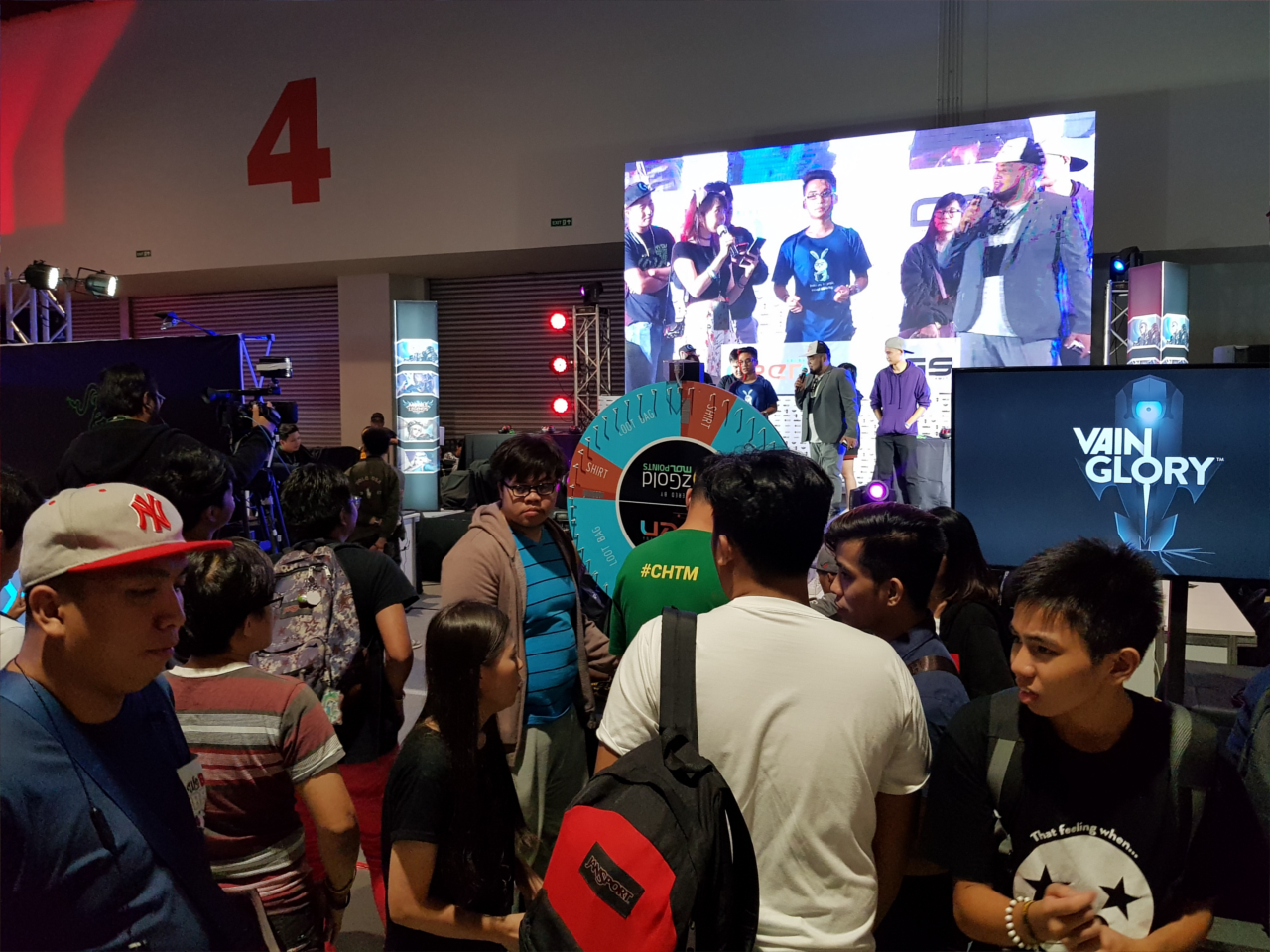 Now we’re at the home stretch! Off to the upper-right corner of the venue is MESA or the Mobile Esports Arena. The booth features mobile game tournaments for titles such as VainGlory, Mobile Legends, and Hearthstone. 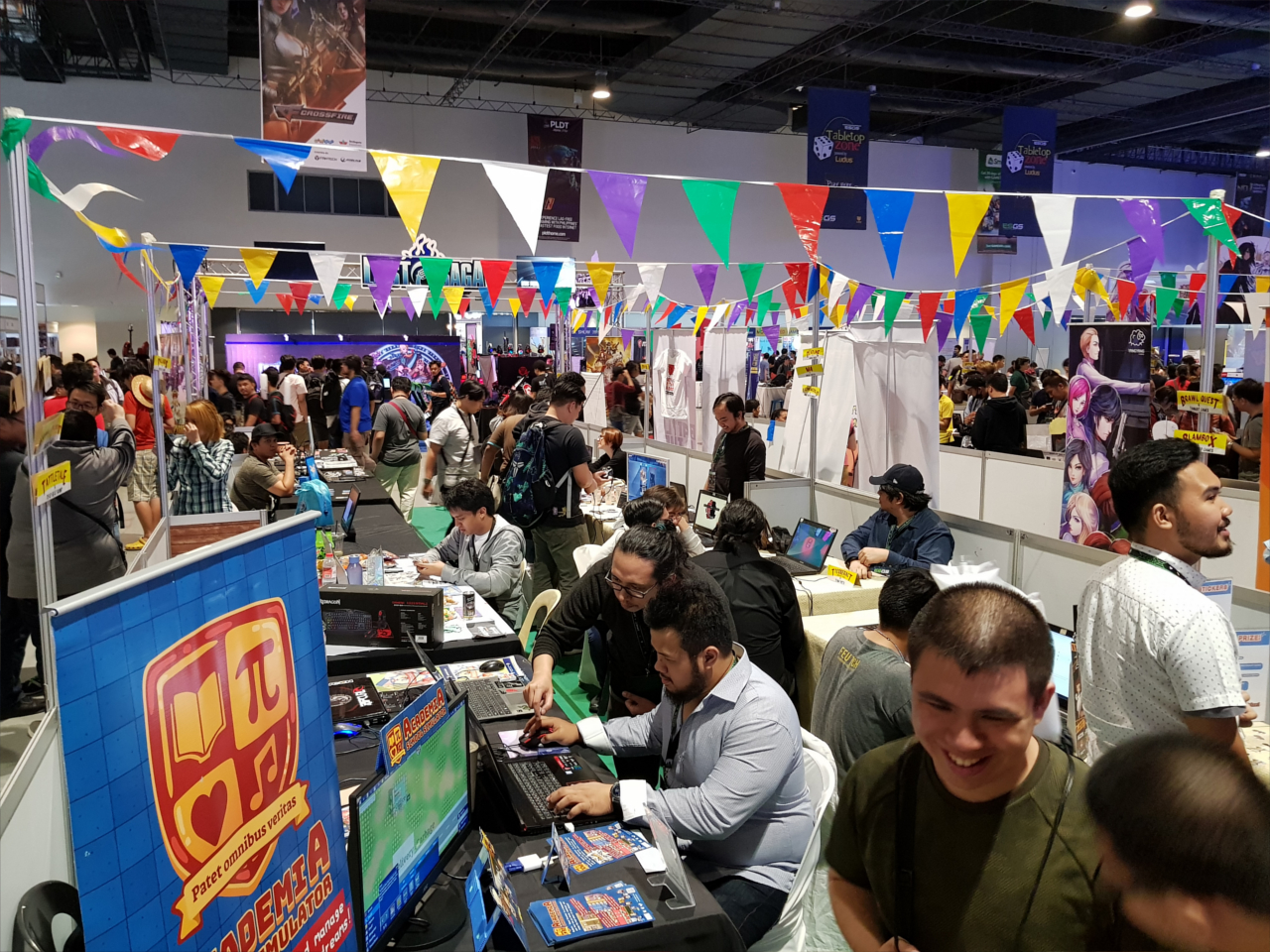 Also, we can’t forget the Indie Fiesta where over 40 indie titles are playable! Not only that, you’ll be able to meet the game developers behind the titles as well. 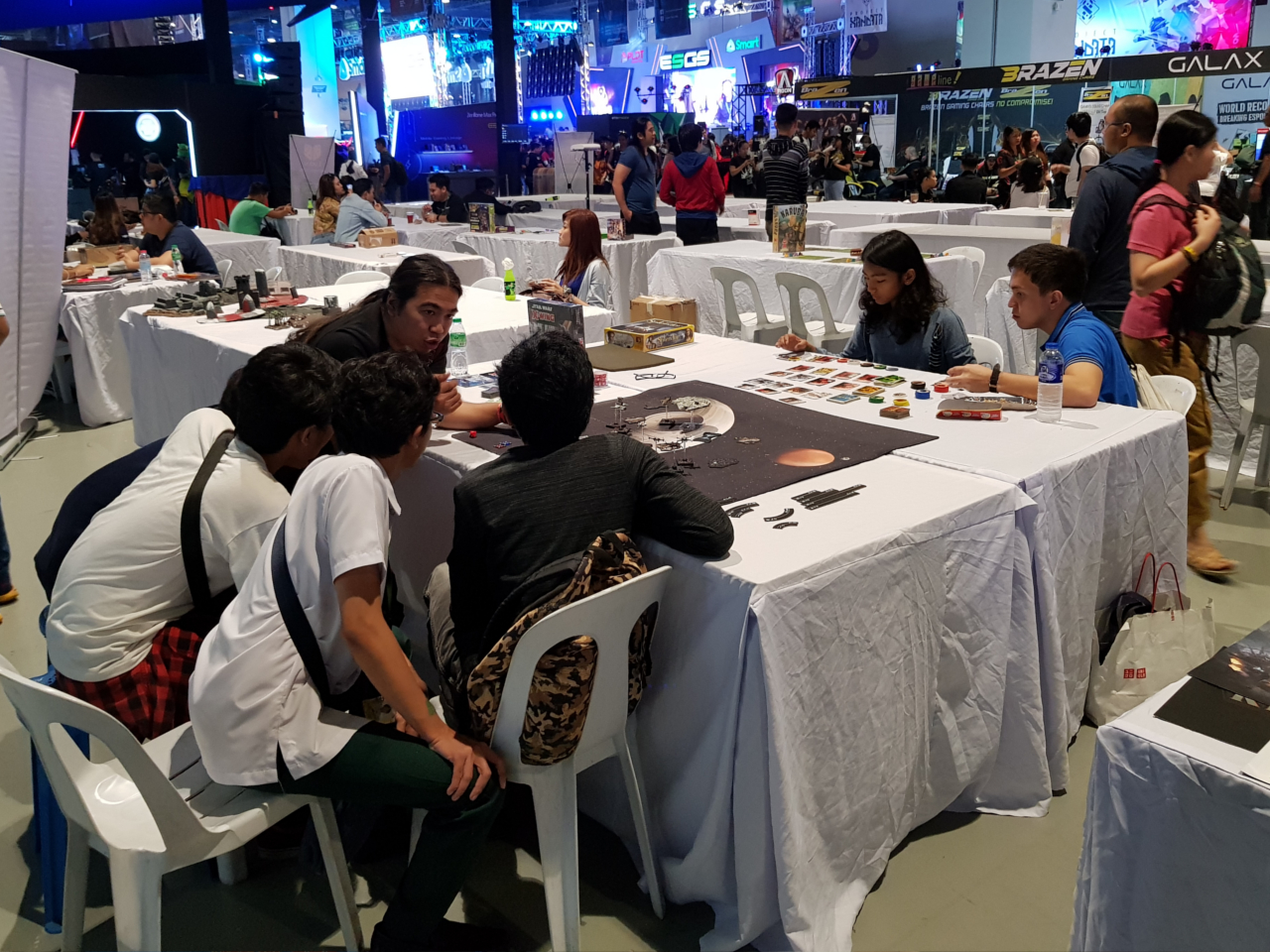 If roaming ESGS’ four halls tires you out, Ludus has a large tabletop game corner where you and your friends can relax and play your board game or card game of choice! 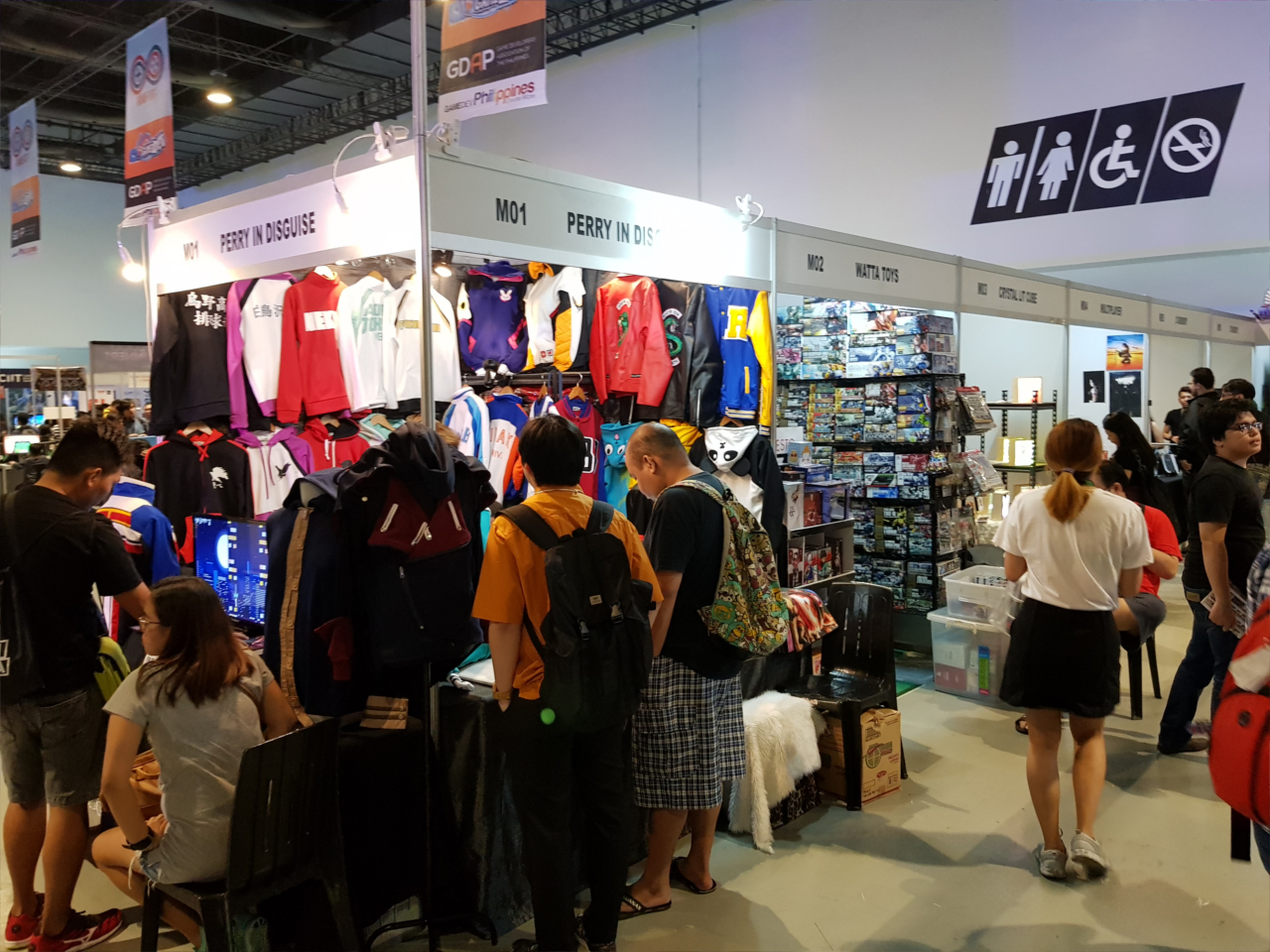 Finally, the lower right corner of ESGS contains the Merchandise Area; it’s the place you HAVE to hit up before leaving the event as it has lots of collectibles that will satisfy every type of gamer. 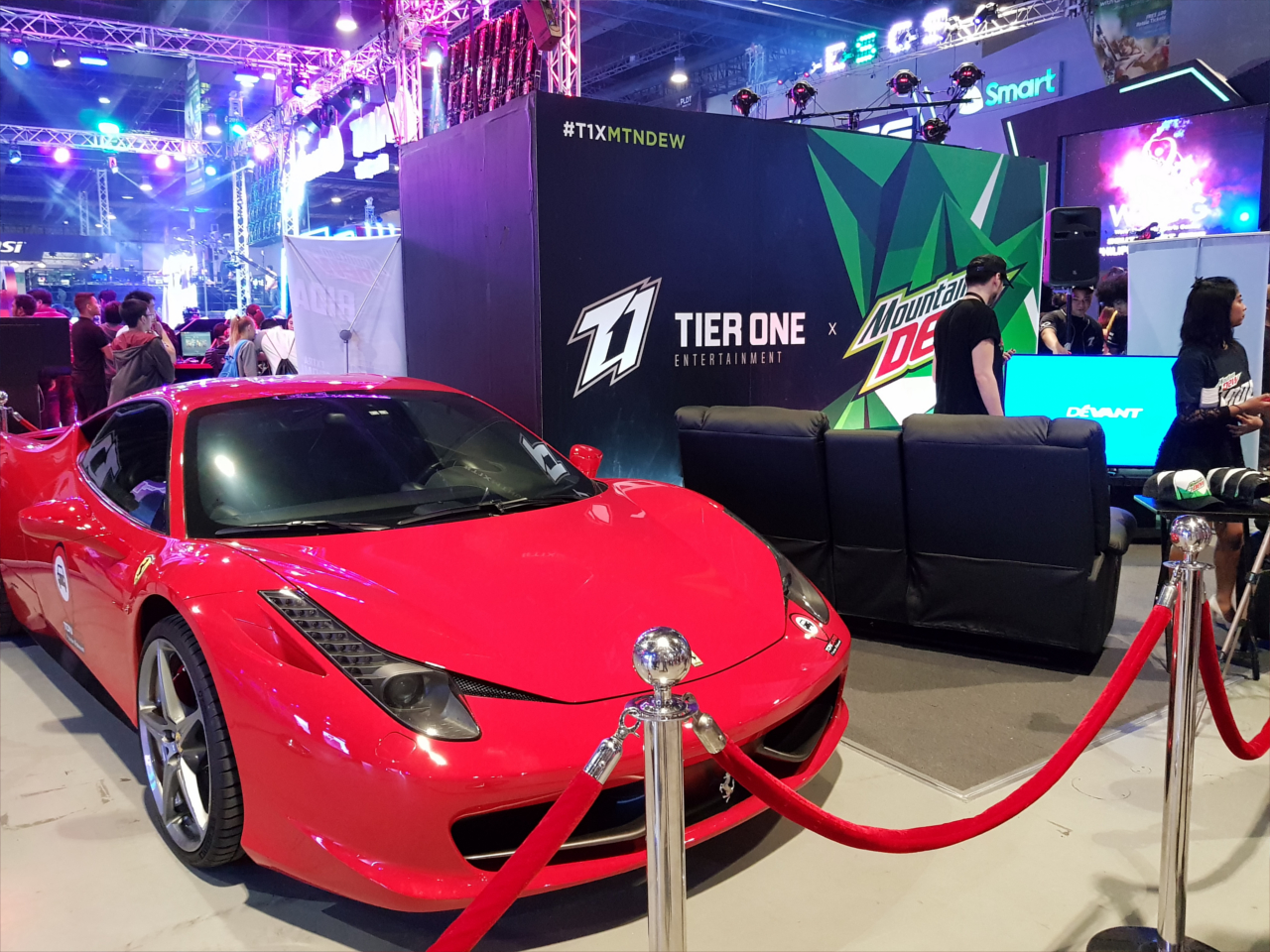 Whew! We covered most of the major booths at ESGS, but can you believe that there’s even more in store at the event? You just have to check ESGS 2018 out for yourself to see everything! 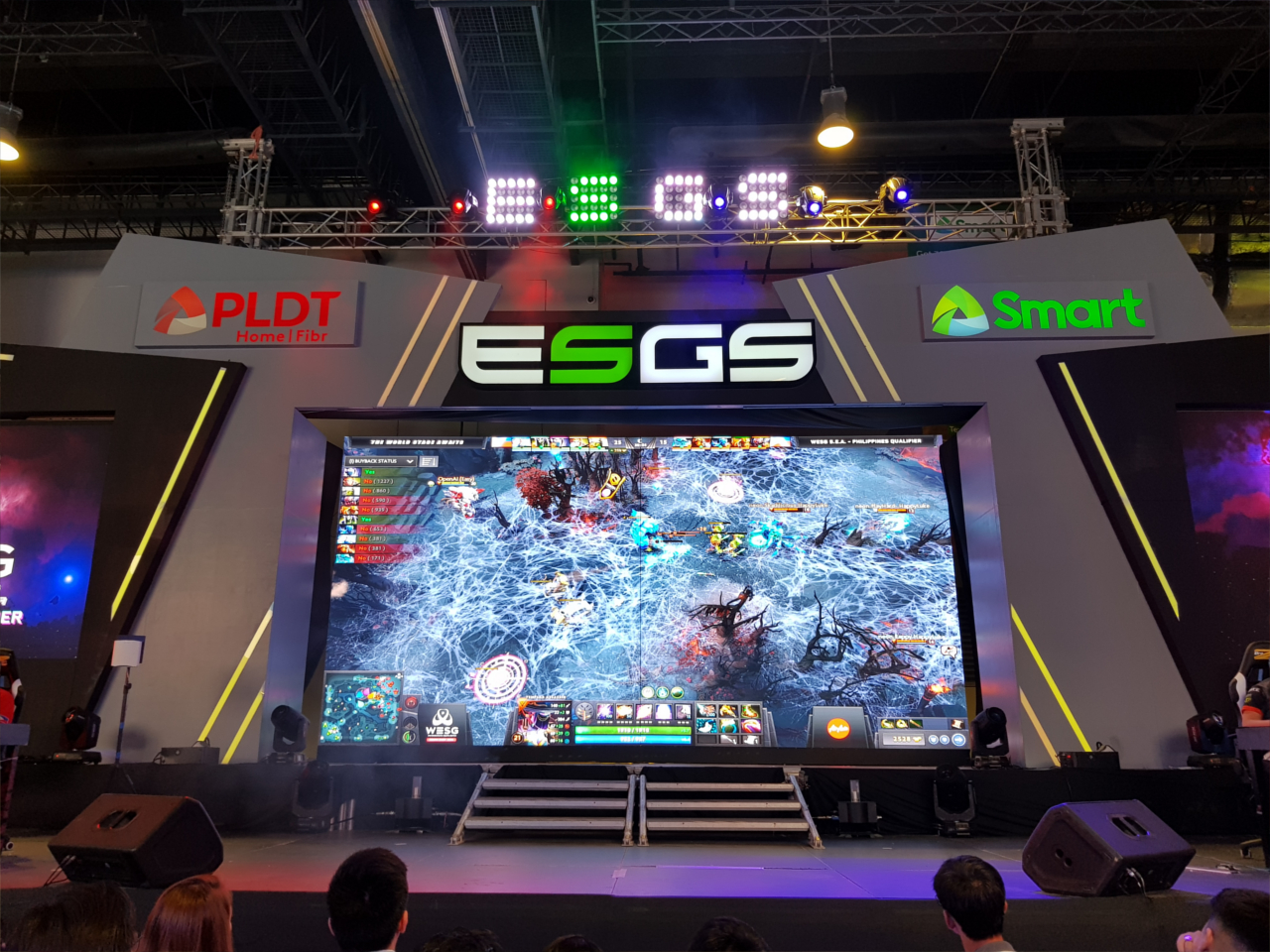 ESGS 2018 is happening now until Sunday (October 28) at the SMX Convention Center, Mall of Asia Complex. You can still buy your tickets at SM Tickets outlets, or at the event venue itself.