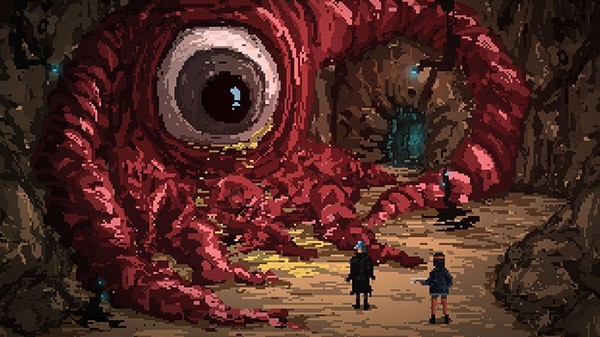 Here is an overview of the game, via its Steam page:

Death Trash is a semi open-world role-playing game with handcrafted levels and a grotesque story campaign.

The game features realtime gameplay with ranged and melee combat, stealth, multiple choice dialogue, an inventory full of items and Fleshworms, a crafting system and social skills like pickpocketing and puking.

Travel through the gritty post-apocalyptic wasteland by world map and explore hand-painted organic locations. Meet exciting characters: Talk to the Fleshkraken, visit the Puke Bar or pickpocket stuff from that old naked guy.

Customize your own character through stats and making choices. Experience the story and discover side quests. Fight against machines and larger-than-life monsters—or become their friend.

Humankind traveled to the stars and settled on the planet Nexus with its ancient secrets of stone and flesh. The machines were installed as protectors, but they were corrupted and brought terror.

You are a raider among the ruins of the past.
But fate might lead you to the Bleeding Head Oracle, the Evergrowing Heart and towards a war with the machines, giving you the power to mend or destroy.

Check out the trailer here for a look at the gameplay. Feels a bit Shadowrun-ny to me, and that’s a good thing:

Death Trash will be available first for PC via Steam Early Access in Q1 2020, followed by all recent consoles – PlayStation 4, Xbox One and the Nintendo Switch.