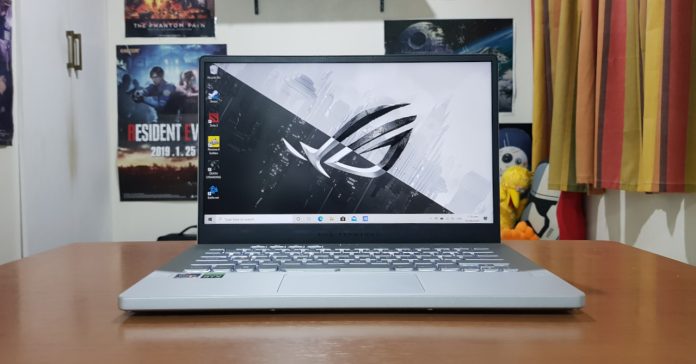 Gaming laptops have come a long way from the bulky behemoths that they were years ago. Now, gaming laptops have become more slim, with designs that no longer scream “gamer”–so much so that you can even bring them to the office or at a cafe and now one will bat an eye.

While I personally like more subtly designed gaming laptops, I’m sure there are gamers that would prefer having a notebook with more aggressive looks. Enter the new ASUS ROG Zephyrus G14. 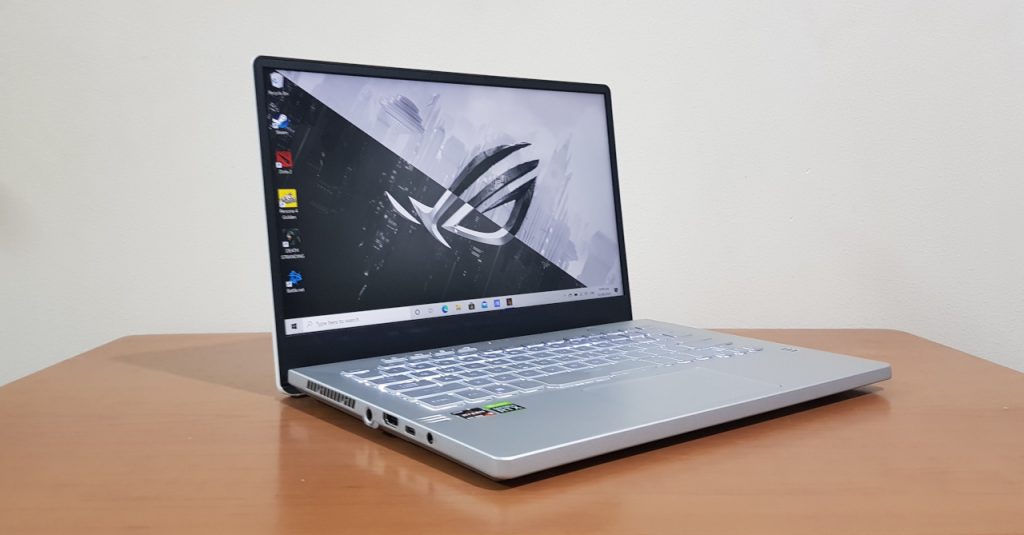 The Zephyrus G14 follows the recent trend of more low-profile gaming laptops, but it does stand out by having a killer design-feature–the AniMe Matrix LED. With this, users can display custom graphics with optional animations on the LEDs embedded on the laptop’s lid, livening up the notebook’s overall design.

Aside from the AniMe Matrix LED, the Zephyrus G14 is also quite interesting as it is one of the few (if only) gaming laptops with a 14-inch form factor. Even with its small size, the Zephyrus G14 is quite beefy specs-wise, as it packs a Ryzen 9 processor and an NVIDIA RTX 2060 GPU with Max-Q design.

So does the G14’s unique design, slim profile, and powerful hardware make it stand out in the competitive gaming laptop market? Find out here in our full review! 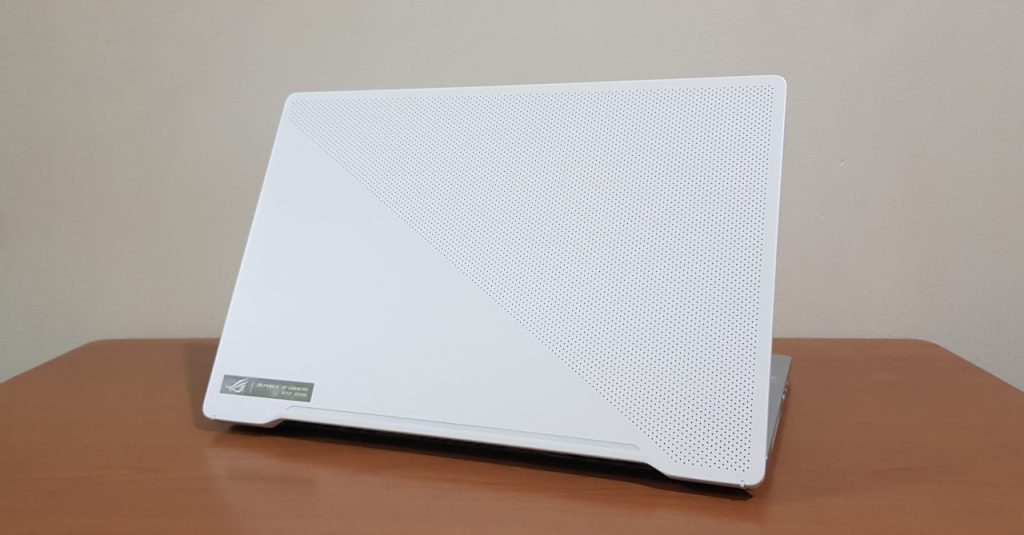 As I mentioned above, the Zephyrus G14 is a gaming notebook with a low-profile design, especially with the AniMe Matrix turned off. In this mode, the G14’s clean look actually makes it look more like a working professional’s laptop instead of a gaming machine.

That all changes when you use the AniMe Matrix though. With it on, the laptop looks way flashier, especially when you select animated effects instead of just text. 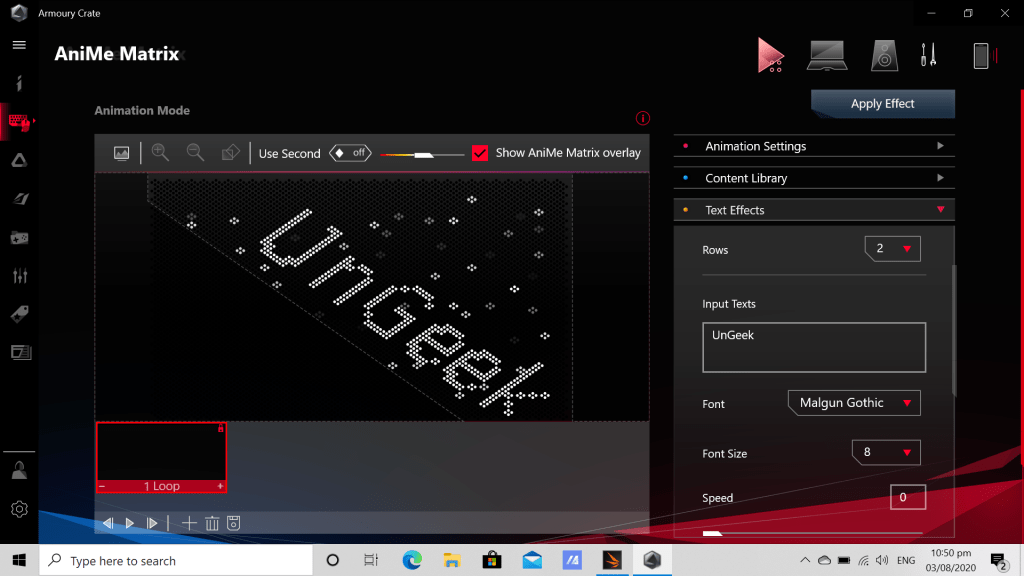 While the AniMe Matrix does have preset effects, you can also choose to display text of your own choosing. You can even add your own customized image and animations for a unique and personalized look via the laptop’s Armoury Crate app. 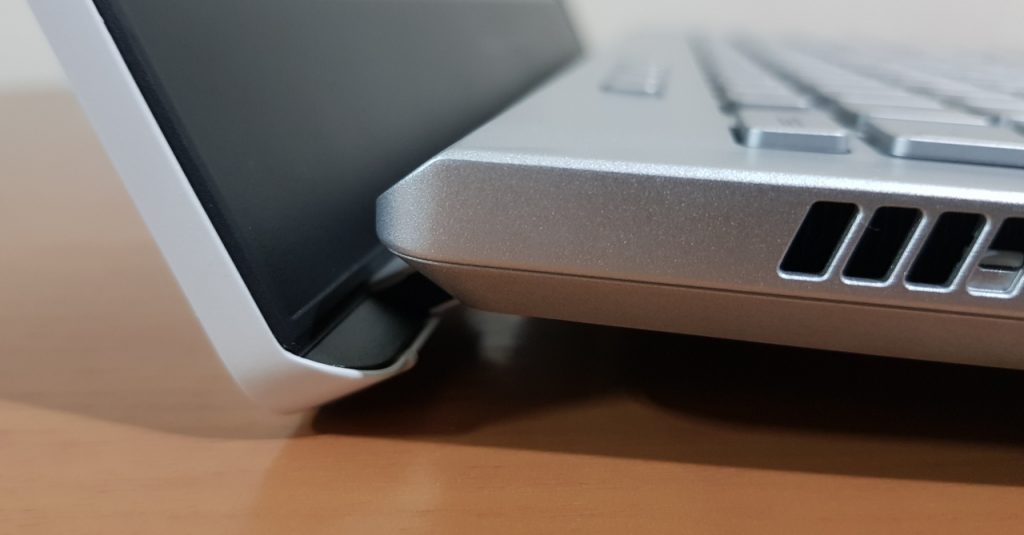 ASUS didn’t just focus on the flashy LED matrix though, the laptop has also been designed for good usability and cooling. For instance, the Zephyrus G14 has a modified ErgoLift hinge design taken straight out of ASUS’ own ZenBook line (and some Zephyrus models); this opens up the bottom for better air circulation. 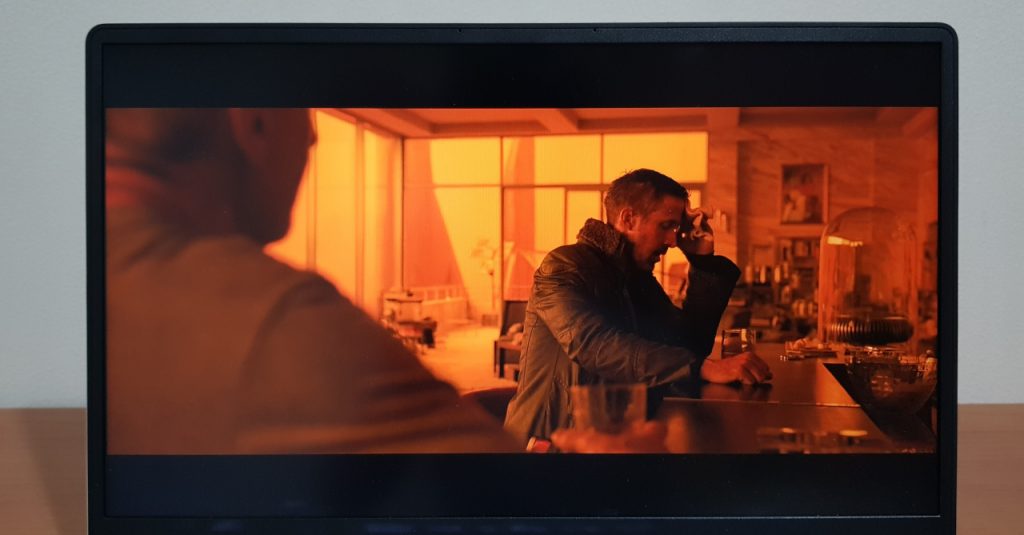 The Zephyrus G14’s screen is a 14-inch narrow-bezel IPS-level display with a 120Hz refresh rate. While you won’t be able to take advantage of the fast refresh rate for movie/TV series marathons, the screen does not disappoint in terms of detail and colors. If you love binge-watching movies or anime on Netflix, the Zephyrus G14 is a great device to have; if you’re fine with a fairly small 14-inch display at least. 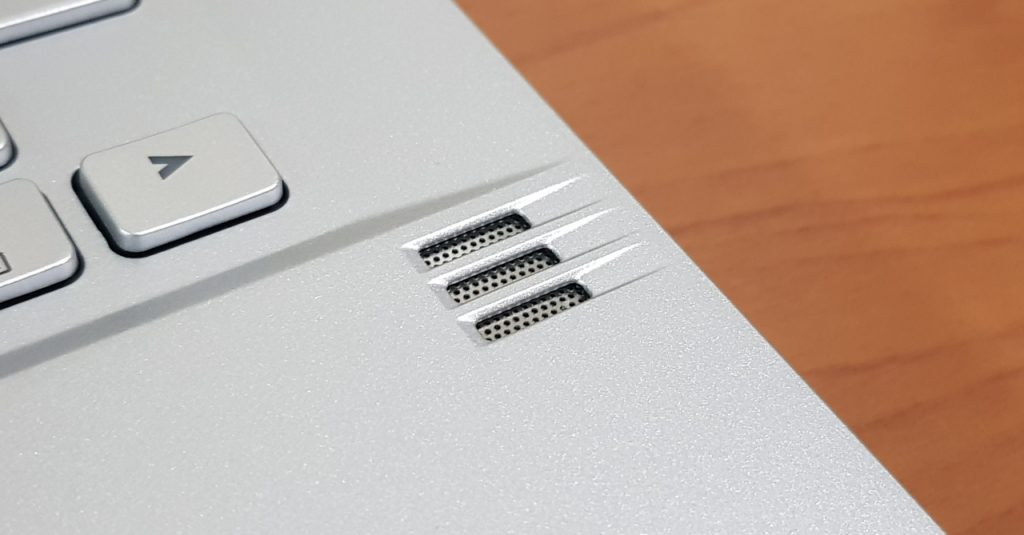 Unlike some laptops I’ve tried out with either bottom or side-mounted speakers, the Zephyrus G14 has two front-facing onboard speakers. This design meant that the speakers had good audio quality, without much distortion even at max volume. The problem is that they don’t get loud enough, even at 100% volume. This means you’ll need an external speaker or headphones when you watch movies, play games, or listen to music on this laptop. 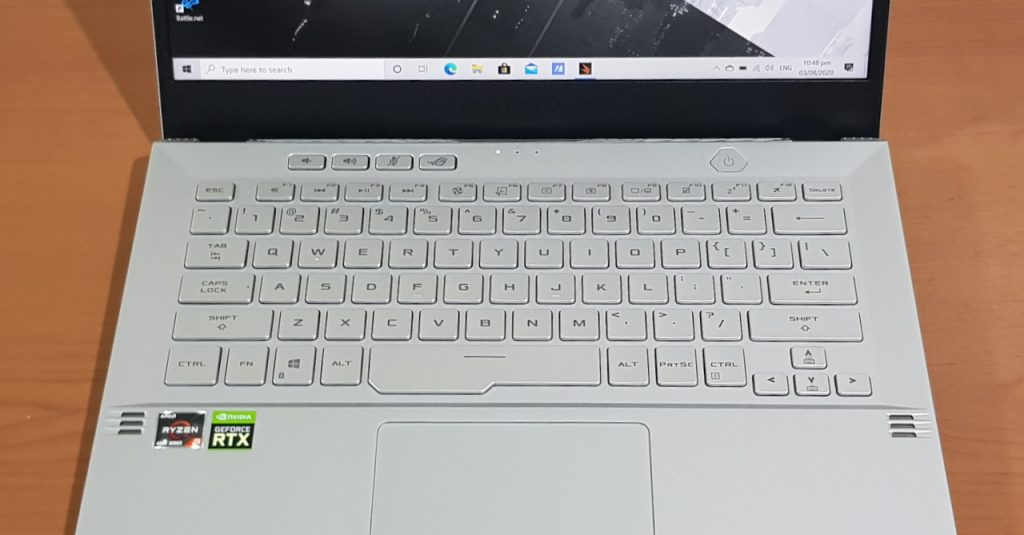 As a 14-inch laptop, the Zephyrus G14 has a tenkeyless keyboard. Even if it’s not a full size keyboard though, the G14’s keyboard is great to both play and type on thanks to proper key sizes and spacing. The travel of the keys are also deeper than I expected, which should make for a satisfying typing or gaming experience (in spite of being ever so slightly mushy).

While most higher-end gaming laptops in the past couple of years have all packed Intel processors, the Zephyrus G14 is different in that it has an AMD Ryzen 9 4900HS CPU. This processor is paired to an NVIDIA RTX 2060 with Max-Q design GPU, and it packs 16GB of RAM. So how does the Ryzen 9 and RTX 2060 combo fare for gaming? The configuration did incredibly well!

For my first test, I tried out Overwatch on the Epic setting (max) and at 1080p. The game ran with an average FPS of 130 which looked buttery smooth on the G14’s 120Hz display. It helps that the display also has FreeSync built-in, meaning it also supports the RTX 2060’s G-SYNC technology for screen tear-free gaming.

After the Overwatch test, I tried out Dota 2 at 1080p and all graphics setting cranked up to max. With everything maxed out, the Zephyrus G14 ran the game at a steady 90-100 FPS, with no major dips in framerate even in intense teamfights. Thanks to the laptop’s beefy internals and high refresh rate display, the Zephyrus G14 is an excellent match for esports titles. 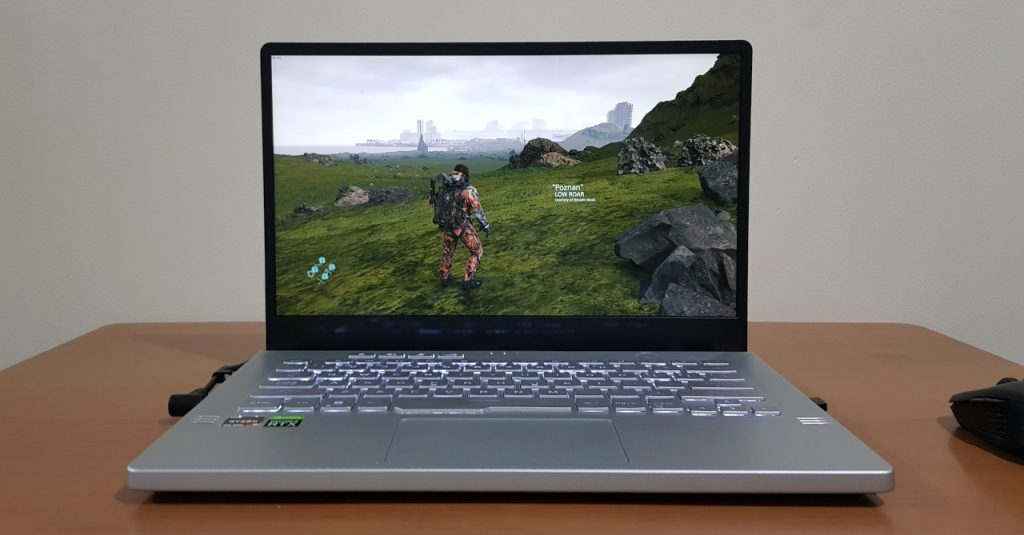 What about for triple-A titles? Well, the Zephyrus G14 also impressed in this regard. For instance, the game ran Death Stranding at the Very High graphics setting and at 1080p with ease, with an average FPS of 90. Yes, 90 FPS for a triple-A title at Full HD! That’s thanks in large part to the game’s DLSS 2.0 support. 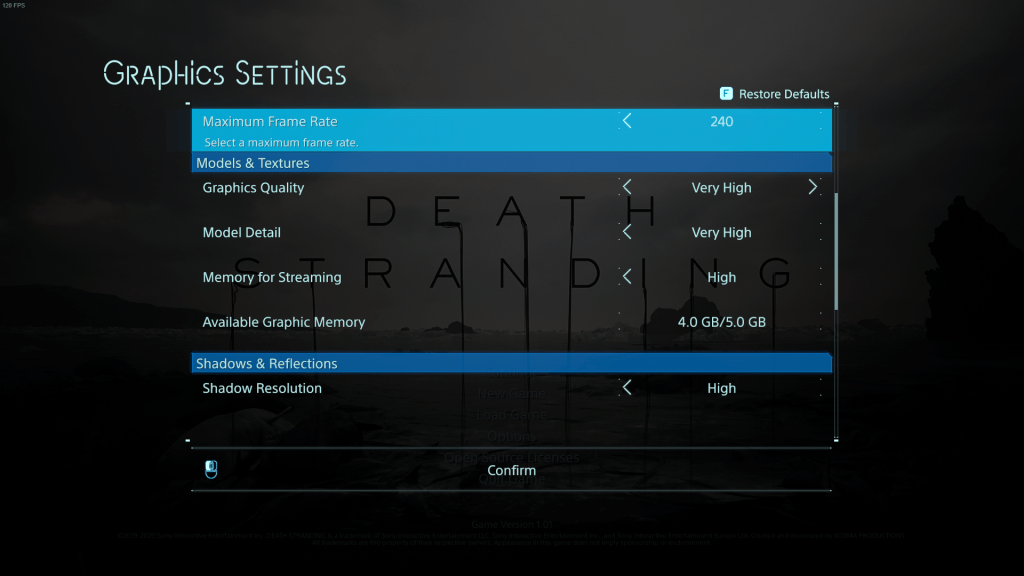 In case you’re unfamiliar, DLSS 2.0 (or Deep Learning Super Sampling) is NVIDIA’s new tech that’s exclusive to RTX graphics cards. Without going into too much detail, DLSS basically renders each frame at a lower resolution, but then uses deep learning to upscale the frame without much loss in quality. Thanks to DLSS, games can run at higher settings and resolution without a big hit in performance. For reference, Death Stranding’s average FPS dips a bit to around 70-80 when DLSS is off and TAA is on. 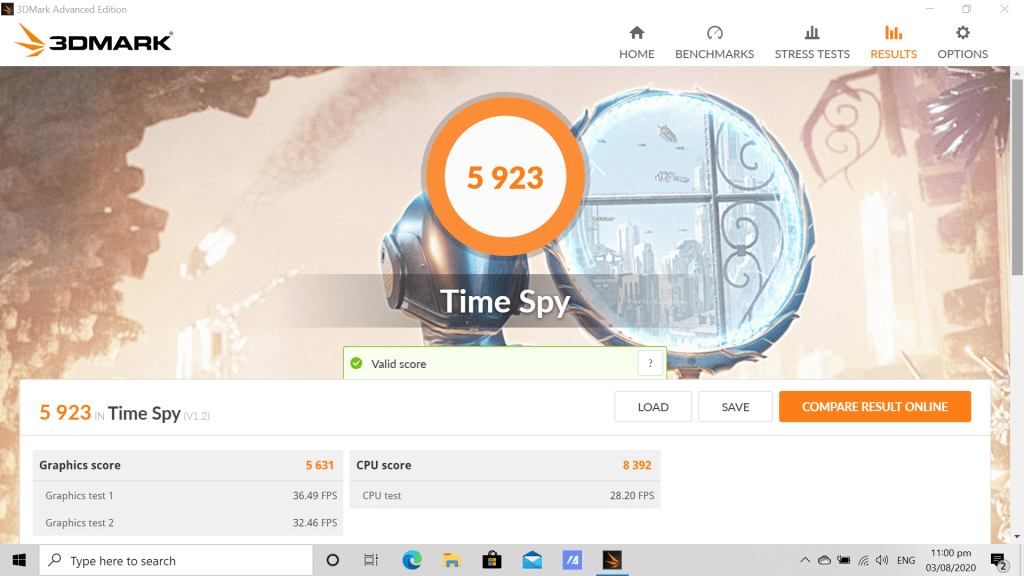 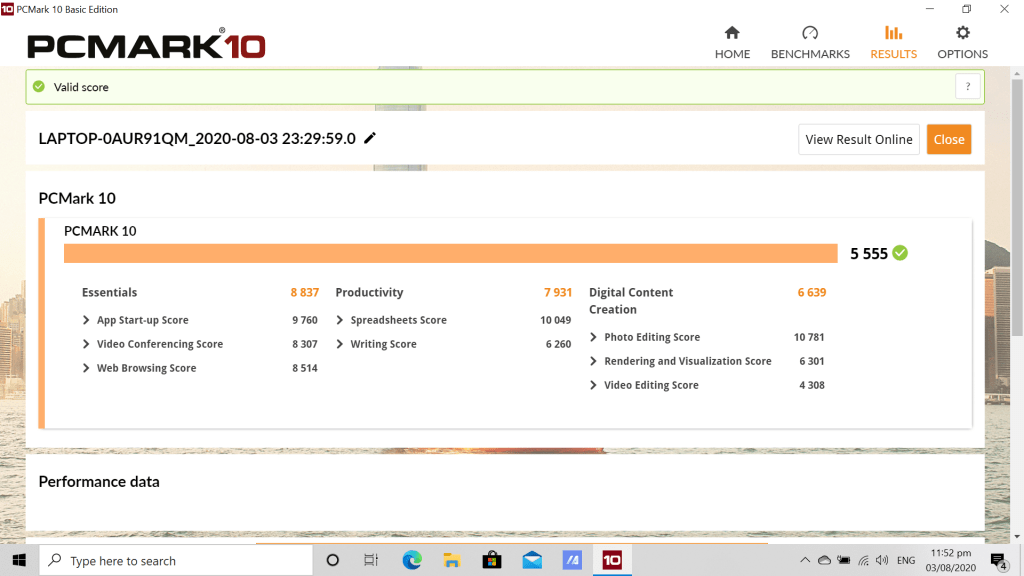 Aside from real-world gaming tests, I also ran some benchmarks on the Zephyrus G14. In 3DMark Time Spy, the G14 scored 5923, a pretty good score overall. Meanwhile, the laptop scored 5555 on PCMark 10, indicating that the G14 has plenty of power for content creation (think photo and/or video editing).

Given its high PCMark 10 score, it’s no surprise that the Zephyrus G14 handled pretty much any basic task with ease, including web browsing and using office applications. The G14’s hardware also means it’s a great option for photo/video editors, as it packs enough power under the hood for these applications.

One thing you may have noticed in the display part of this review is that the Zephyrus G14 lacks a webcam. Don’t worry, the laptop comes packed with an external webcam inside the box. This is actually a solid choice, as I think that an external webcam is a better idea compared to having a webcam that’s placed at the bottom part of the display area (which results in an awkward angle). 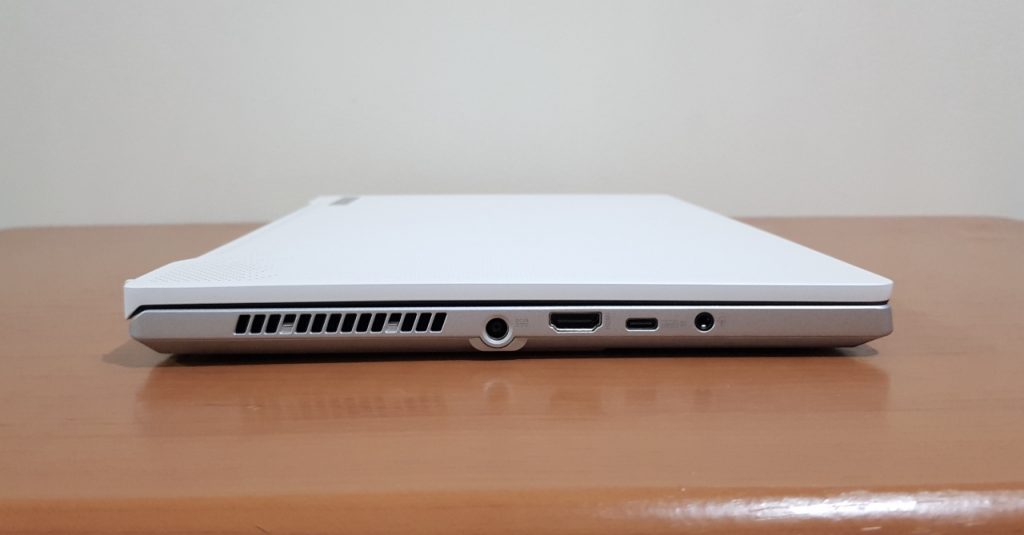 What impressed me the most with the Zephyrus G14 is the battery life. After playing a 2 and 1/2 hour movie at 50% volume and brightness, the G14 still had around 68% battery remaining–that’s almost the exact same result as the VivoBook S14 I reviewed recently. In real-world use, that should translate to around 8 or so hours on a single charge. That’s definitely impressive battery life for a gaming laptop! 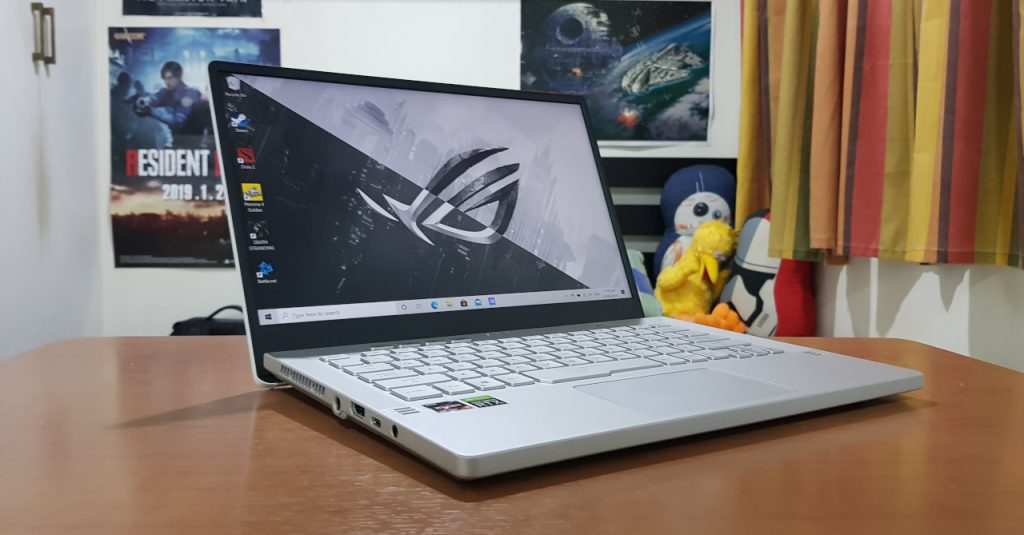 So does the ROG Zephyrus G14 stand out in today’s gaming laptop market? It definitely does! The G14 has tons of power under its hood for gaming and productivity, all while having excellent battery life. The Zephyrus’ design is also noteworthy, as it sports a low-profile while packing a unique AniMe LED Matrix for users who prefer a more showy look. To top it all off, the Zephyrus G14’s form factor is small and light, perfect for gamers who either don’t have much space or want something that’s easily portable.

Overall, the ROG Zephyrus G14 is easily one of the most impressive gaming laptops you can get right now. It does come at a cost though as the Ryzen 9 + RTX 2060 model is priced at PHP 109,995. There is a Ryzen 9 + GTX 1660Ti model priced at PHP 99,995 though if you want something that costs a bit less. Of course, these are still good deals if you have the budget, especially each unit comes with an ROG 14” Sleeve, ROG Strix Impact Mouse, and the ROG Eye external web camera.

- Advertisement -
Previous article
Meta.us and JBL team up for new DOTA 2 Open League in the Philippines
Next article
Project CARS 3 is now available for pre-order