The Dark Picture Anthology: Little Hope Review | Fun, but not the scariest 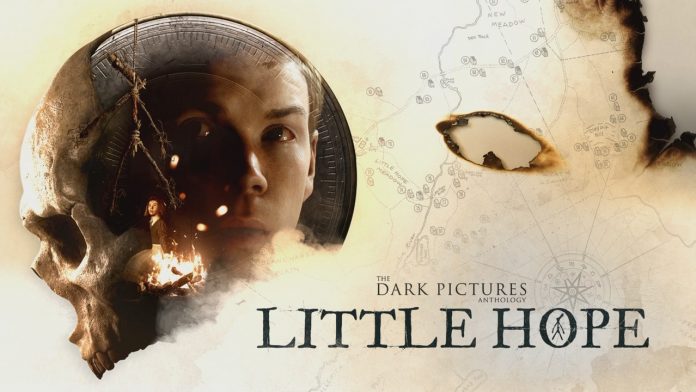 We are back yet again with another title from Supermassive games, and it is the second entry into The Dark Pictures Anthology. Of course we’re greeted again by the same enigmatic gentleman, who obviously has done a lot of squats during his free time. The Curator shares another incomplete tale where our decisions matter (or so I thought). This time, 5 unfortunate souls are trapped and are forced to face demons of the past in a ghost town called Little Hope–a town with a rich history with the occult and witch trials.

Much like from the first story, Man of Medan, the fate of the characters in this tale are determined by the choices of players; whether they survive the night or be killed by the demons that lingers in the fog. While Little Hope tries to improve on its predecessor in both gameplay and graphics, the question is, does it manage to provide an overall better experience? Find out here in our review!

Dangers beyond the Fog 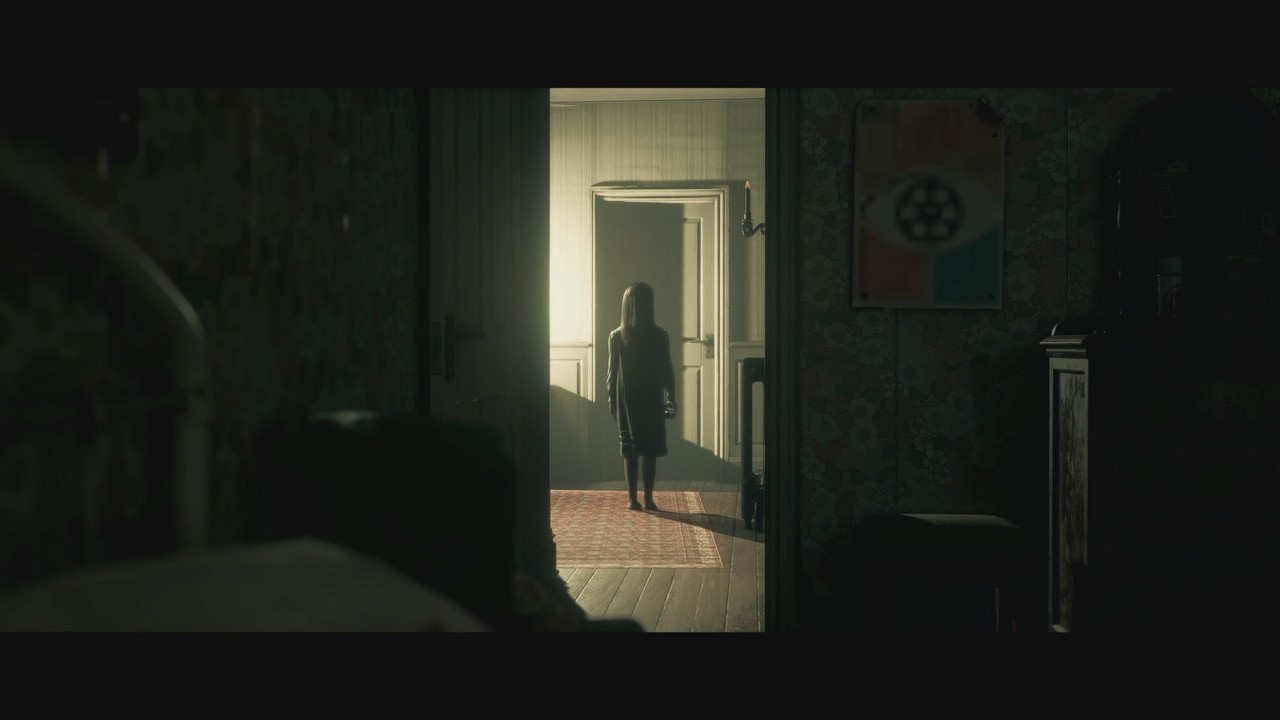 Ok, I’ll try not to spoil the whole story like in Man of Medan. Little Hope’s story begins with a flashback from the past in 1970 where a family of six faces a turmoil in their relationship as the Father is about to lose his job, resulting in him getting drinking problems. Meanwhile, the Mother is left to deal with the problems at home, especially those concerning the behavior of their 4 adopted children, particularly the youngest Megan. Her youngest seems to be troubled by some sort of a dark entity, and things take a turn for worse when a doll catches fire, setting the whole house ablaze killing everyone. 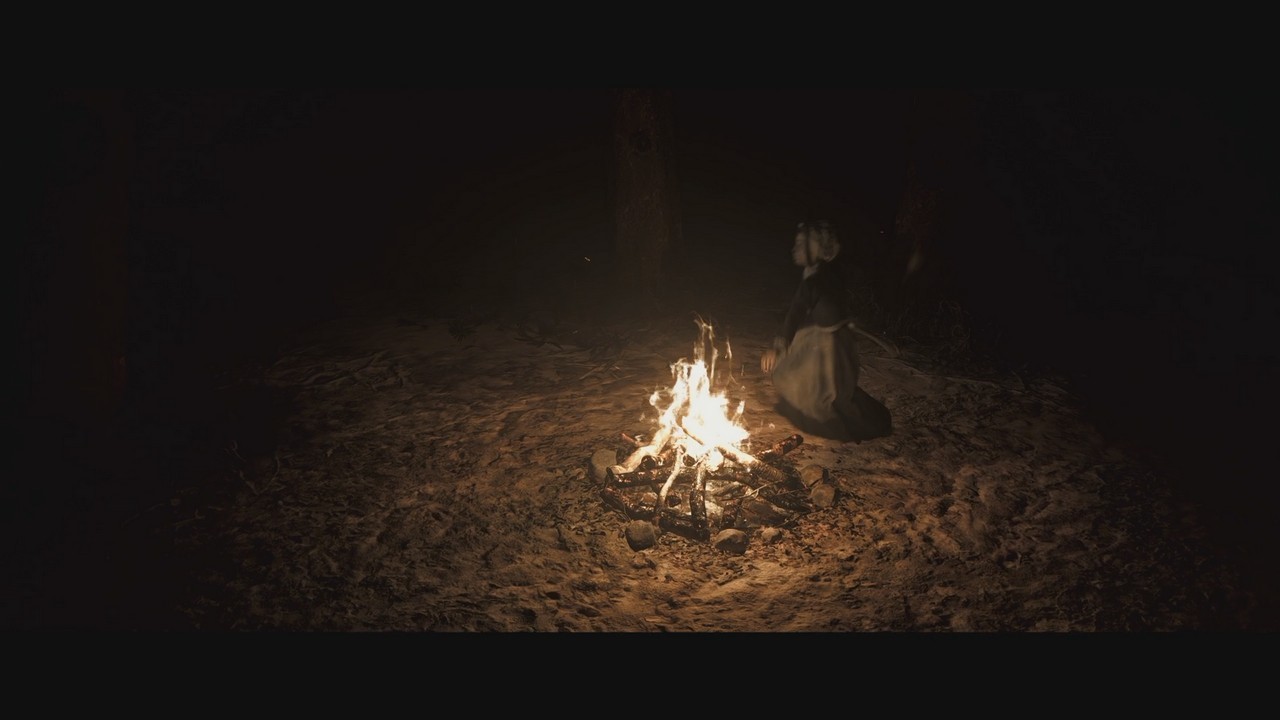 After this blast from the past, we then shift to the present with a group of college students and their professor. They attempt to find help as they recover from a bus crash as they pass to Little Hope, only to find out that the bus driver is missing and the thick fog traps them in the said town. What makes the group intriguing is that they bare an uncanny resemblance to the departed family. 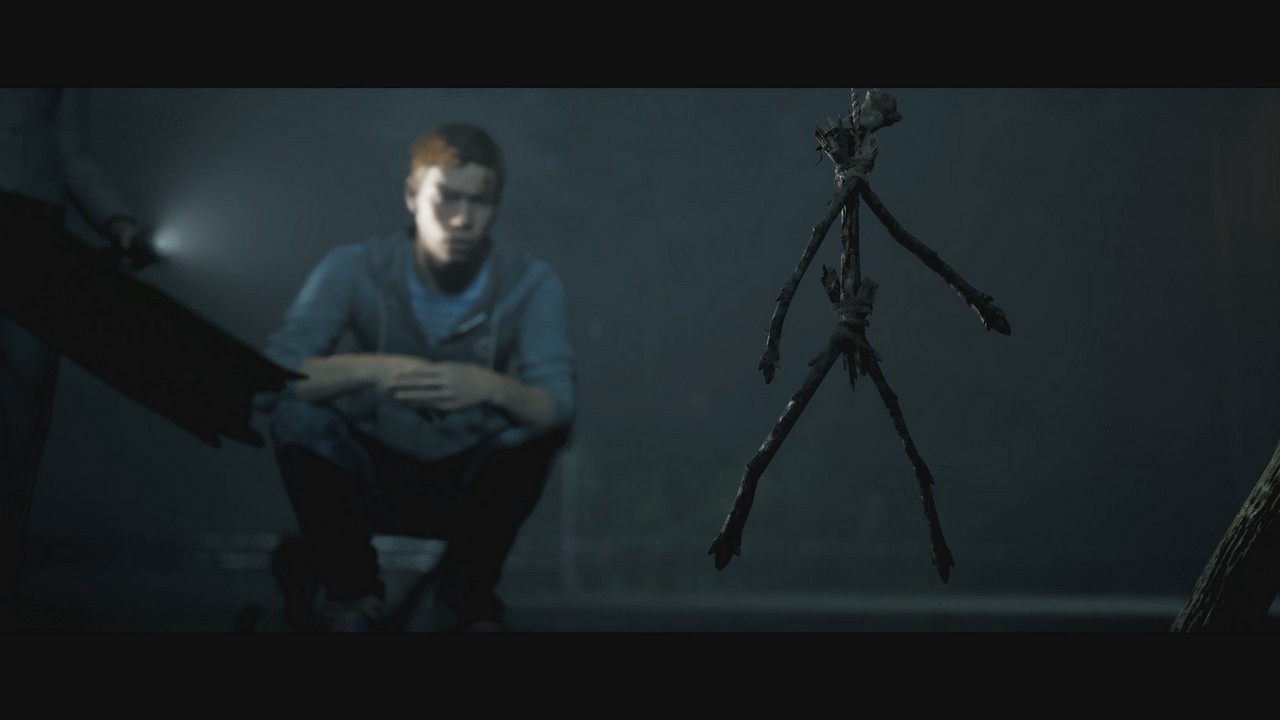 Much like Man of Medan that borrows from a real life ghost story and follows horror movie tropes, Little Hope’s premise is based on the Salem witch trials, and obviously takes some elements from the Blair Witch movie. While the thick fog and the overall theme takes a noticeable inspiration from the Silent Hill games. 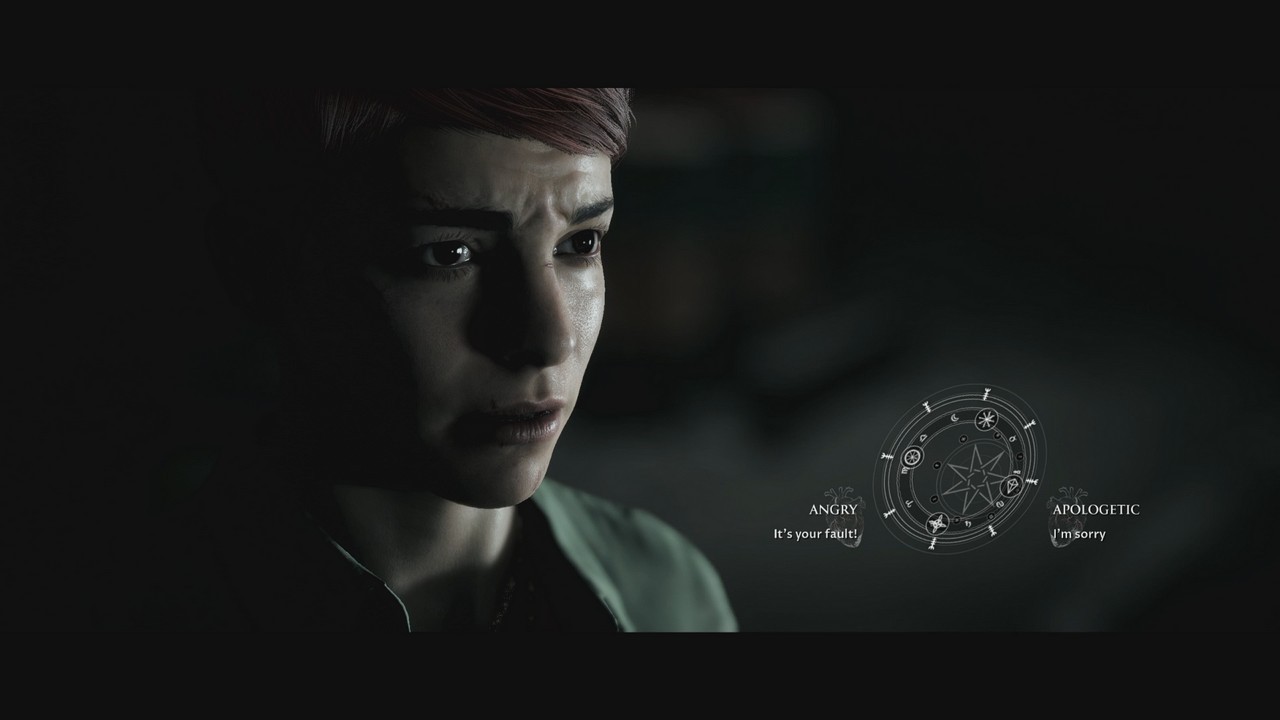 The overall gameplay of Little Hope is just the same as Man of Medan and Until Dawn. Again, the fate of characters and the outcome of the story will unfold depending on your choices. This means the story branches with tons of possible outcomes, though in some scenarios, it doesn’t feel like your choices really mattered. Sometimes they just simply dismisses your response and act illogically in the situation. One examples of those scenario was when John suddenly flipped out as if he’s under the influence of alcohol, despite the fact that I decided the he shouldn’t drink. 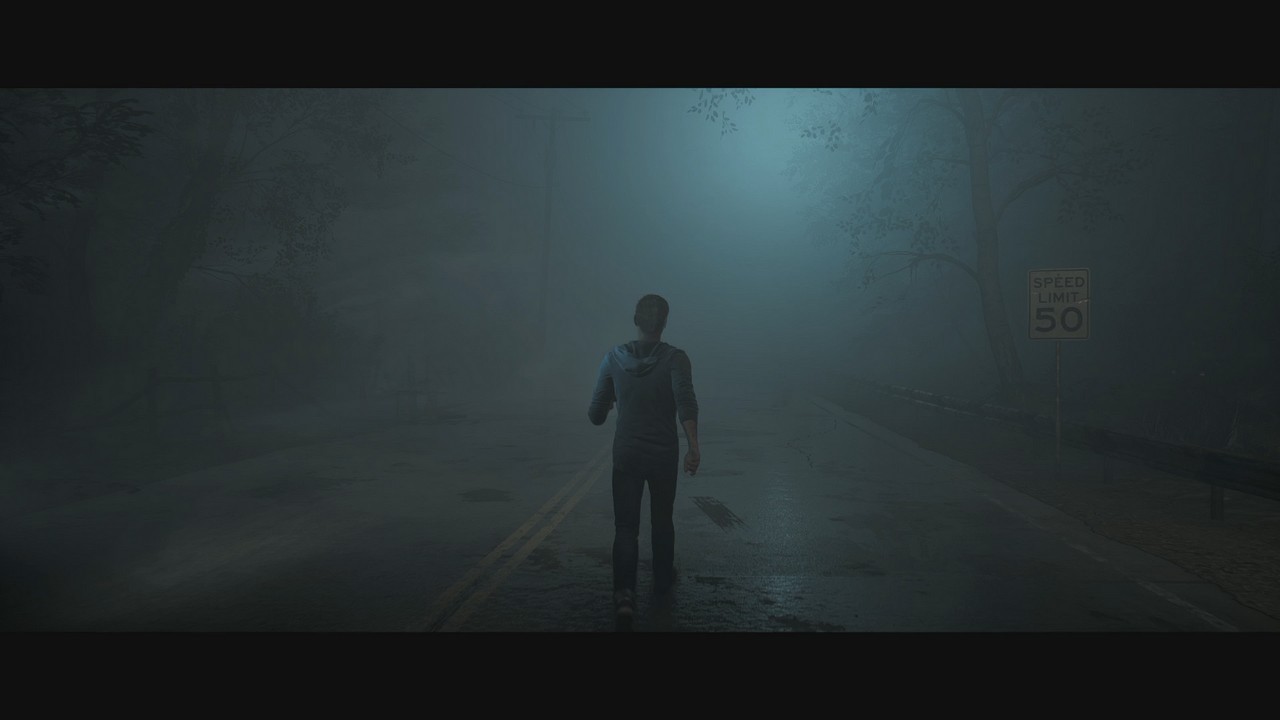 But something that you can only notice if you play both games is the improved camera control. It’s a minimal change, but now you have a limited camera control, all without abandoning the cinematic view of the game. Unfortunately this addition is often wasted because a huge portion of the game is spent on a wide road where there really is nothing to see. QTEs are also back, but this time instead of just suddenly showing up, an icon will prompt the player. This gives players enough time to respond, especially after a long scene; although some people might find it quite easy. But in my opinion, this change is for the better as its just really hard to respond if you forget that you are actually playing a game and not watching a movie. 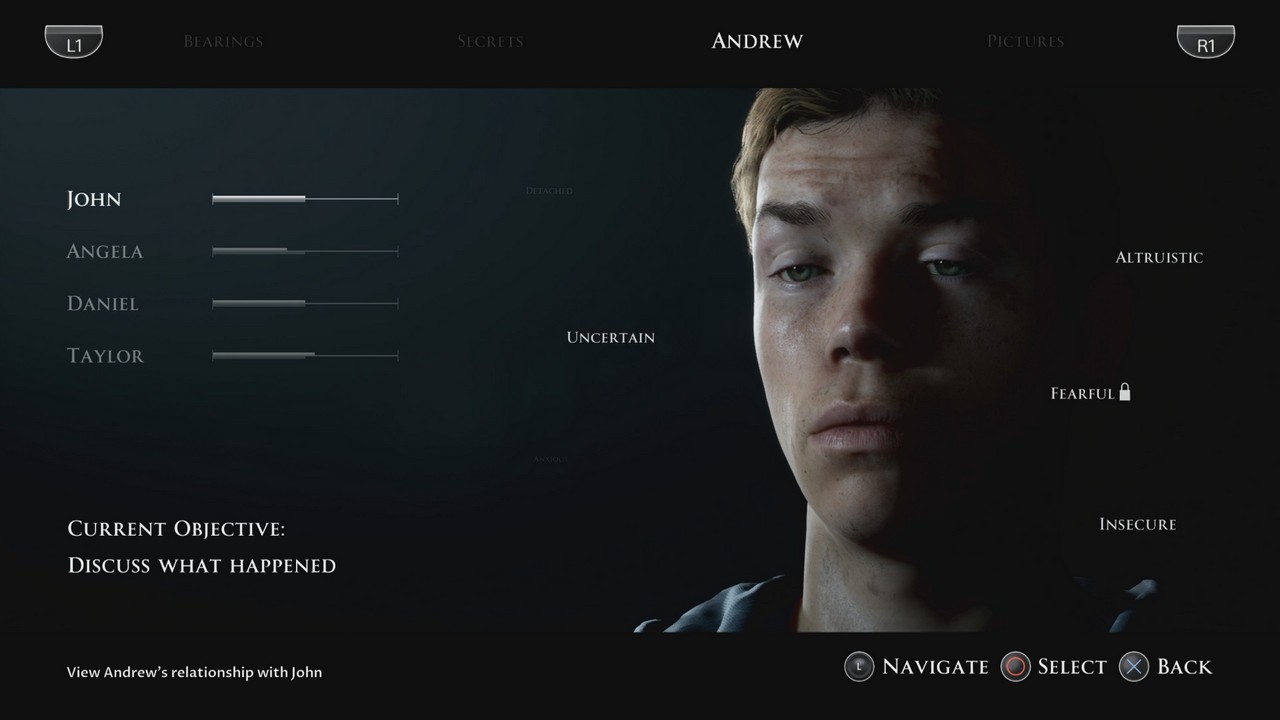 While I really like what they did with the QTE, I still have a mixed feeling with the Trait system. There is now a padlock trait for each of the characters that appears when it accumulate enough points from your choices. This part is really vague as there was no explanation about it. The only clear thing is once these traits appears they are permanent and have a huge impact later-on.

Not that kind of Horror

I admit, the early jumpscares did surprised me, but they happened in obvious places and were quite repetitive. Basically, this is not that kind of horror game that will instill a lingering fear in your mind. Instead, all situations puts you in a sense of panic having the knowledge of what your choices could cost you. Although reaching the ending might give you more of an idea why this game is not really a horror story. Its not perfect, but I’ll take this route rather than being promised horror but receiving frustration instead. 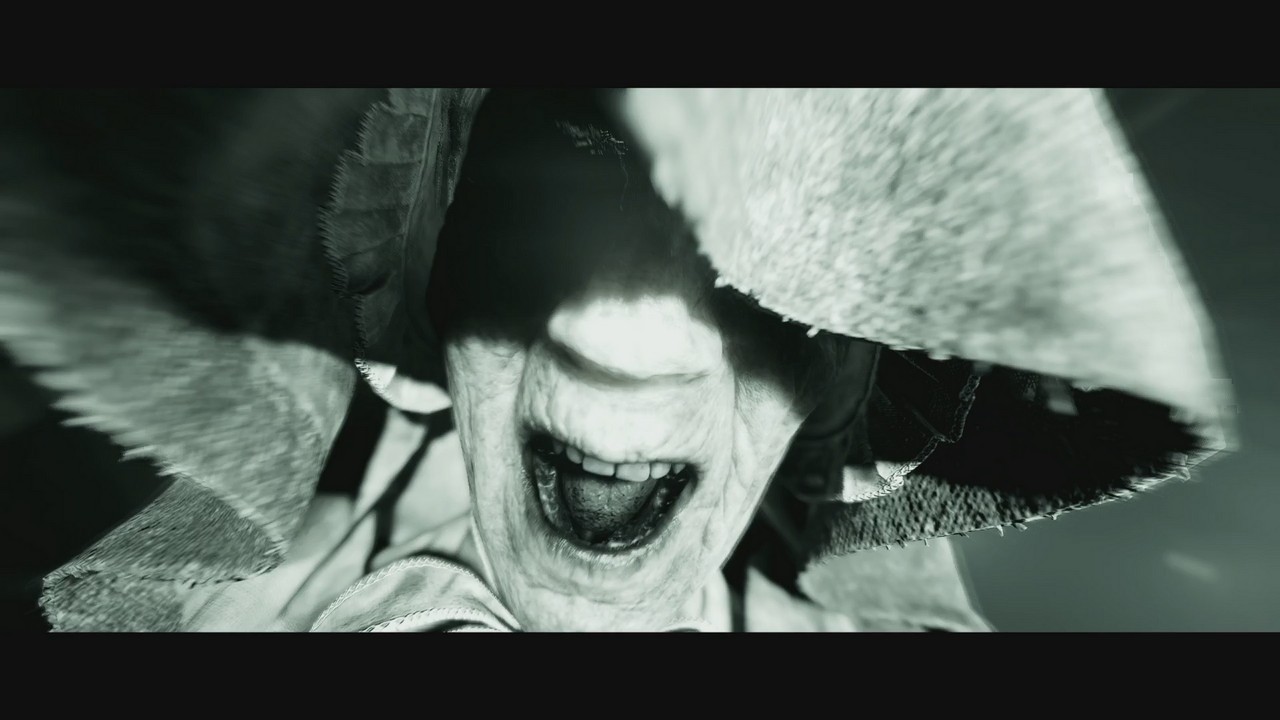 Perhaps the biggest issue that I actually have was the characters and the ending (don’t worry, no spoilers here). Firstly it was a slow build up before everything goes in full circle. But it managed to not give me reason to really care for the whole group. I don’t find any of them likable, although I admit I did my very best to avoid any death because surviving was my goal. Needless to say., the whole story is not bad, it’s just that the characters are forgettable. As for the ending, without spoiling it, I just felt I was robbed or cheated from all the troubles that I went through.

Even with the less-than-satisfying ending, Little Hope should still be quite fun, especially if you’re playing with friends. After all, discussing and speculating with friends is an entertaining experience when playing this kind of game.

While it could’ve been better, I can’t deny that Little hope is a better interactive experience than Man of Medan. Now with QTEs giving you a heads-up rather than simply popping-up out of nowhere, this makes the QTE-driven gameplay feel much better. The photorealistic models and motion capture has also been improved, with character expressions this time feeling more natural and not like its predecessor where they often looked like unsettling moving wax figures.

Although I can’t really say the same about the characters, Little Hope’s story is actually a fun ride, even with the lackluster ending. Even if it lacks that kind of horror that will stick with you and is still heavily reliant on jump scares, Little Hope is a definite improvement over the previous title, and is well worth playing for horror genre fans.

The game itself will put you in tense and panic but its never actually scary. Despite having a wonderful cast including Will Poulter it didn't manage to give any kind of connection with characters. Even with these issues though, Little Hope is still a fun game overall, and it's a definite technical improvement over its predecessor. The Dark Picture Anthology: Little Hope Review | Fun, but not the scariest