A high-end gaming laptop with little to no compromise. 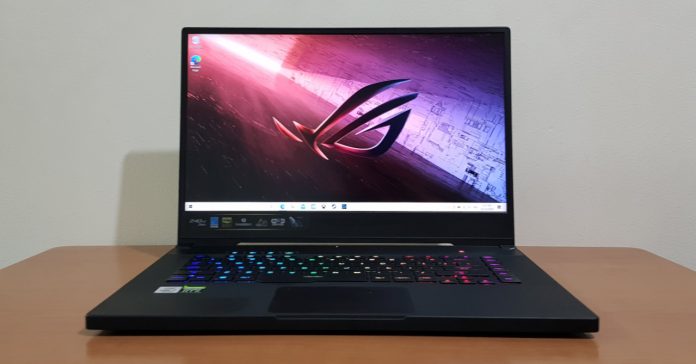 ASUS ROG has released a range of innovative gaming laptops, including the dual screen Zephryus Duo and the unique Zephryus G14 with its LED-backlit cover. Aside fro these though, ASUS ROG has also launched a couple of more low-profile gaming notebooks, including the Zephyrus M15. 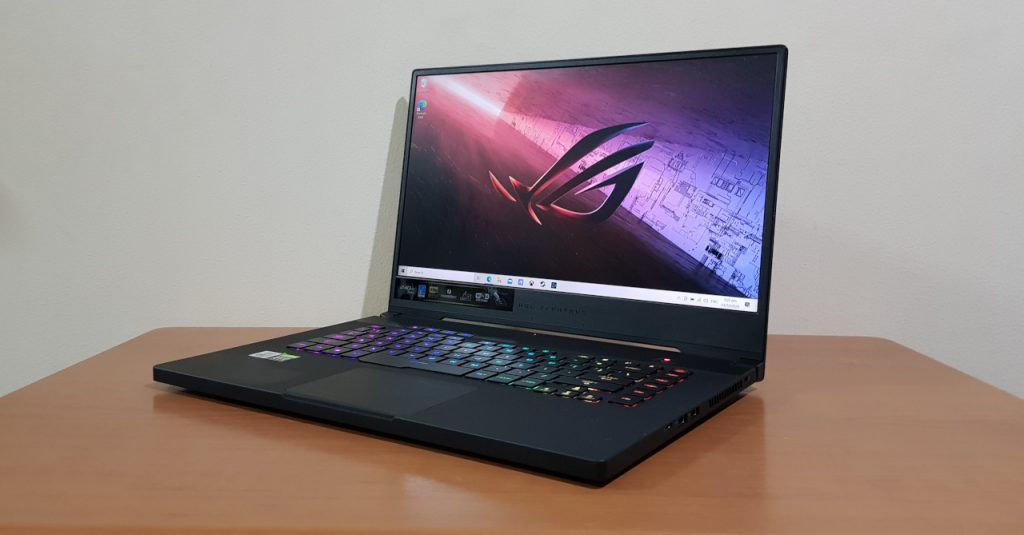 While it may not be as attention-grabbing as the Duo or the G14, the M15 is still a laptop that carries the Zephyrus DNA. After all, the M15 does come with powerful hardware, all while being slim and light enough that it can be easily brought everywhere.

Right now though, the M15 faces some stiff competition, both from laptops by other brands, as well as ROG’s other Zephyrus devices. So does the Zephyrus M15 have what it takes to stand out? Find out here in our full review! 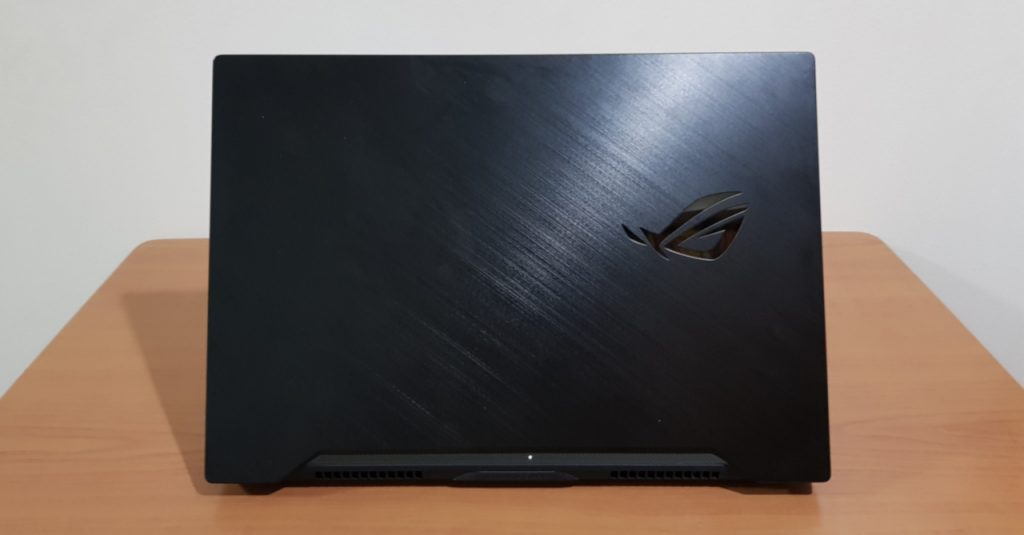 In terms of looks, the Zephyrus M15 in Brushed Black looks sleek and stylish, though it does look similar to previous generation Zephyrus laptops. If you want a different look though, the M15 comes in the Prism Gray colorway which is styled a bit similarly to the G14 in that it trades the ROG logo with a more subtle ROG branding off to the corner. Whatever your taste may be in gaming laptop design, the Zephyrus M15 is sure to delight.

What’s even better is that, overall, the Zephyrus M15 looks like a gaming laptop, but is not “loud” enough to draw too much attention. This means you can definitely use it when working in the office or in a cafe.

For I/O, the Zephyrus M15 has a good amount of ports. The M15 has 3 USB SuperSpeed Type-A ports, one Thunderbolt Type-C, an ethernet port, an HDMI port, and separate headphone and microphone 3.5mm jacks. This is unlike most other gaming laptops today that have a combo jack. 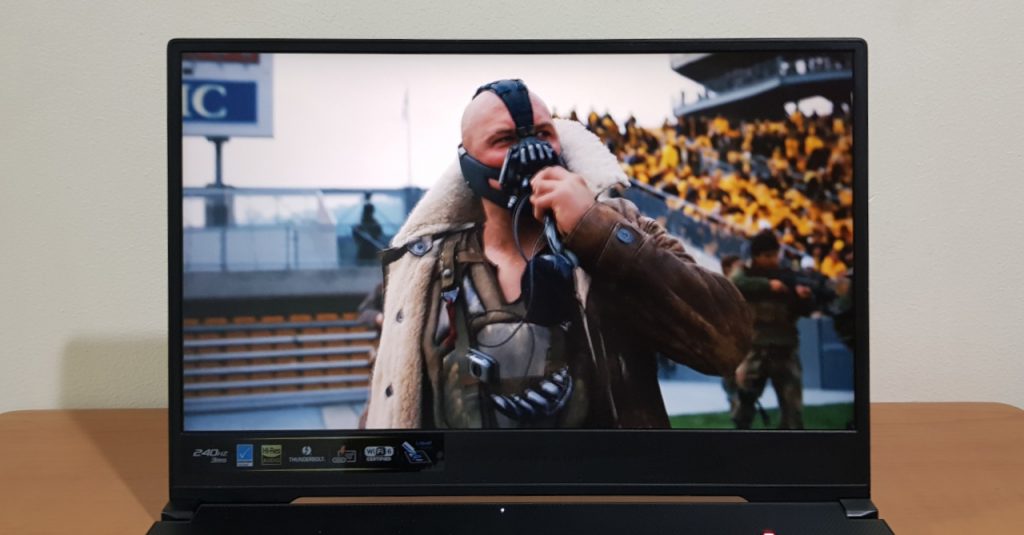 For its display, the Zephyrus M15 has a 15.6-inch Full HD screen with a 240Hz refresh rate and slim bezels. While the high refresh rate won’t really be noticeable when watching movies/shows, the slim bezels help a lot in giving a more immersive viewing experience. Coupled with the good colors and the fact that the screen gets plenty bright, the Zephyrus M15 is definitely a great match for binge-watching. 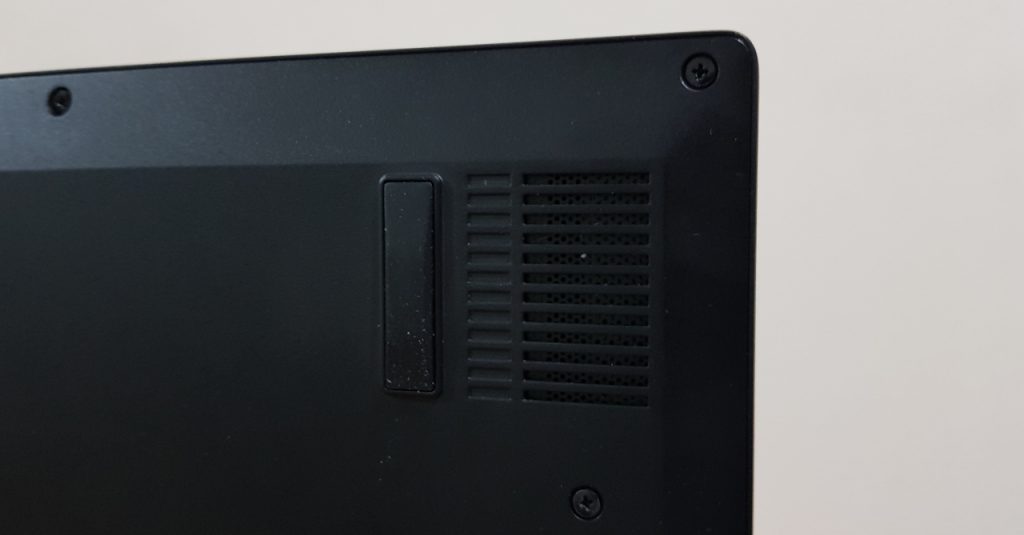 As for audio, the Zephryus M15 packs stereo speakers that are of decent quality. While the sound quality is nice, the speakers just don’t get loud enough, whether for gaming or for binge-watching. Sure, they can work if you just want to watch a short video, but for gaming sessions or for movie marathons, headphones or external speakers are very much recommended. 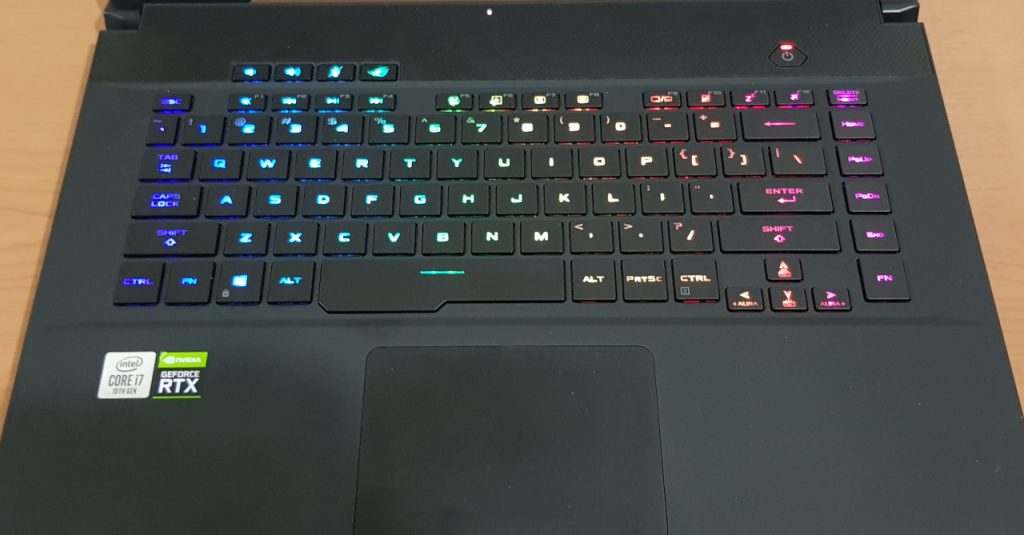 ASUS packed the Zephyrus M15 with a tenkyeless per-key RGB keyboard; interesting given that the laptop’s size is big enough to have a dedicated number pad. Still, for most users, the tenkeyless keyboard should be satsifactory as the keys have a nice tactile feel (for a membrane keyboard) and are spaced just right, making for a comfortable typing and gaming experience. 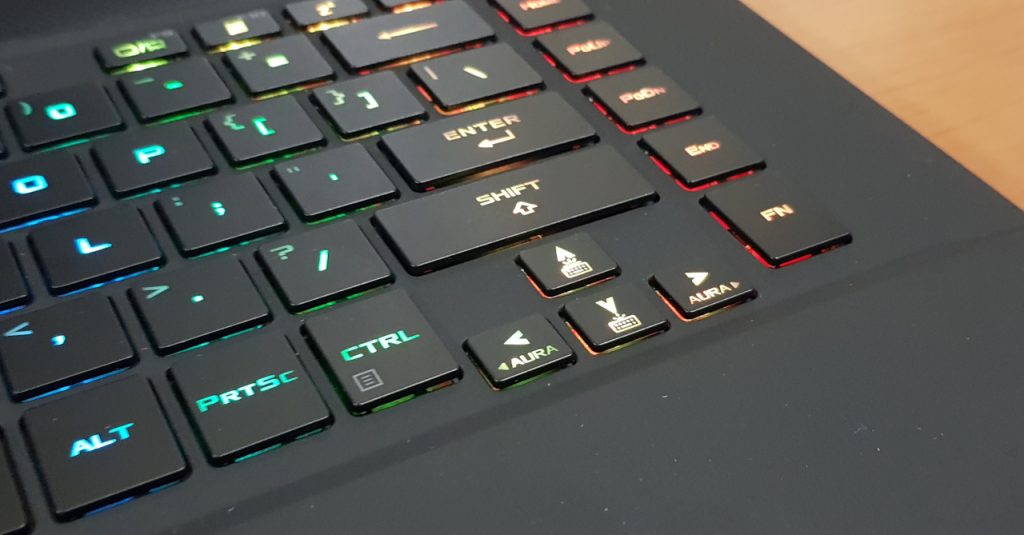 One small complaint I do have is that the arrow keys are tiny on the M15’s keybaord. While far from a deal breaker, as someone who uses the arrow keys regularly when typing articles (among other work requirements), the M15’s arrow keys were a bit too small for my liking. 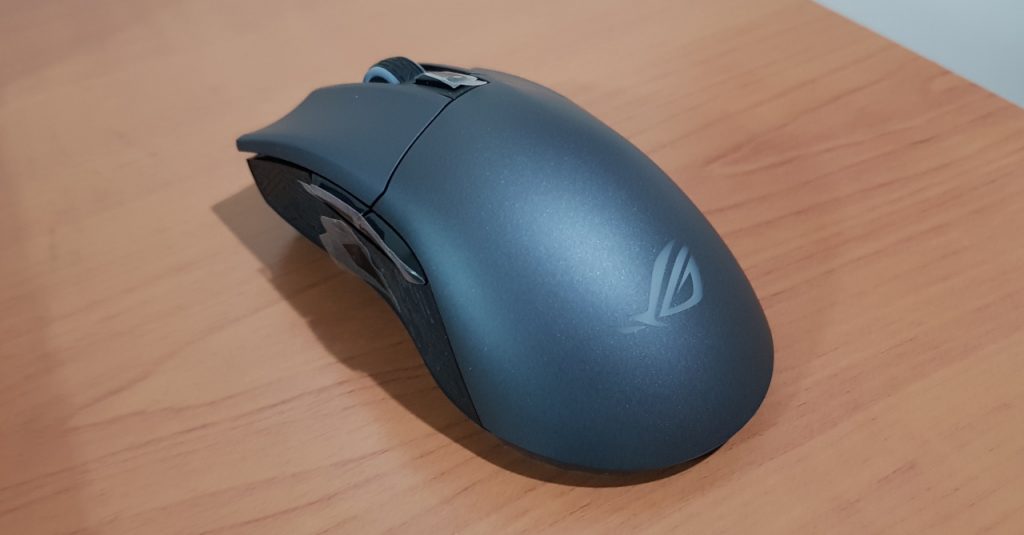 On the flip side though, I appreciate the fact that the Zephyrus M15 has an ROG Gladius II gaming mouse bundled inside the box. Having a gaming mouse bundled with a laptop is always a plus, especially as it allows users to game ASAP even if they don’t have a good mouse on hand.

As a Zephyrus laptop, the M15 packs powerful hardware, including a 10th generation Intel Core i7 processor along with an RTX 2070 with Max-Q Design GPU. Complementing these is 16GB of RAM, as well as a 1TB SSD. 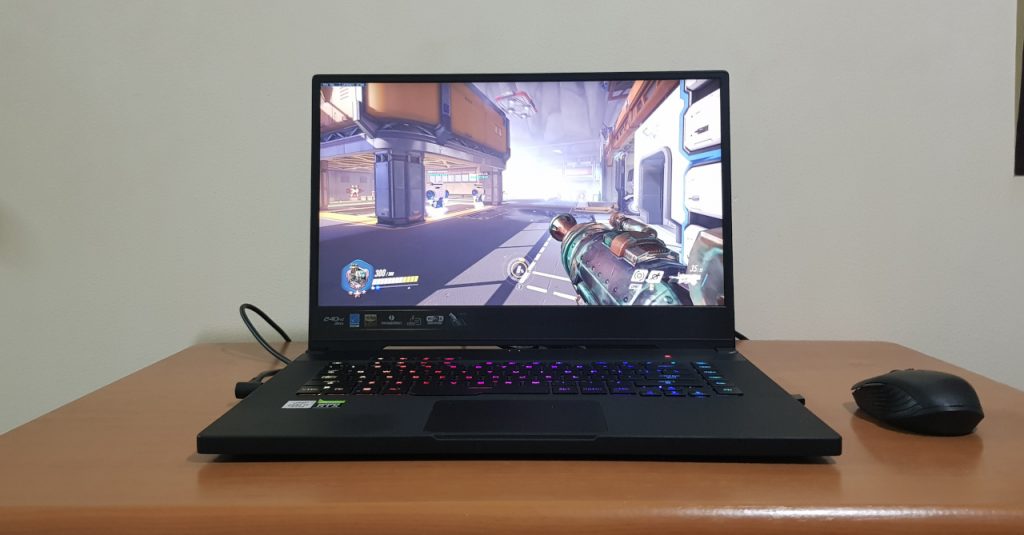 As expected, the Zephyrus M15 is easily able to handle today’s popular esports titles such as Overwatch and Dota 2. At the Epic setting and at 1080p, Overwatch ran with an average FPS of 100. Meanwhile, Dota 2 ran at 80-90FPS when set to max graphics and at a 1080p resolution. What’s even better is that gamers can actually see high FPS averages on esports titles thanks to the laptop’s 240Hz refresh rate display.

Moving on to triple-A titles, the Zephyrus M15 did not disappoint. For example, Shadow of the Tomb Raider’s in-game benchmark returned an average FPS of 69, and that’s at the Very High graphics setting and at 1080p. This means modern triple-A games should run at 60FPS on this new ASUS laptop.

Another great thing about the M15 is that it has an RTX graphics card, meaning it’s a great option for most of today’s games that come with RTX-exclusive graphics options, including DLSS and real-time ray tracing. 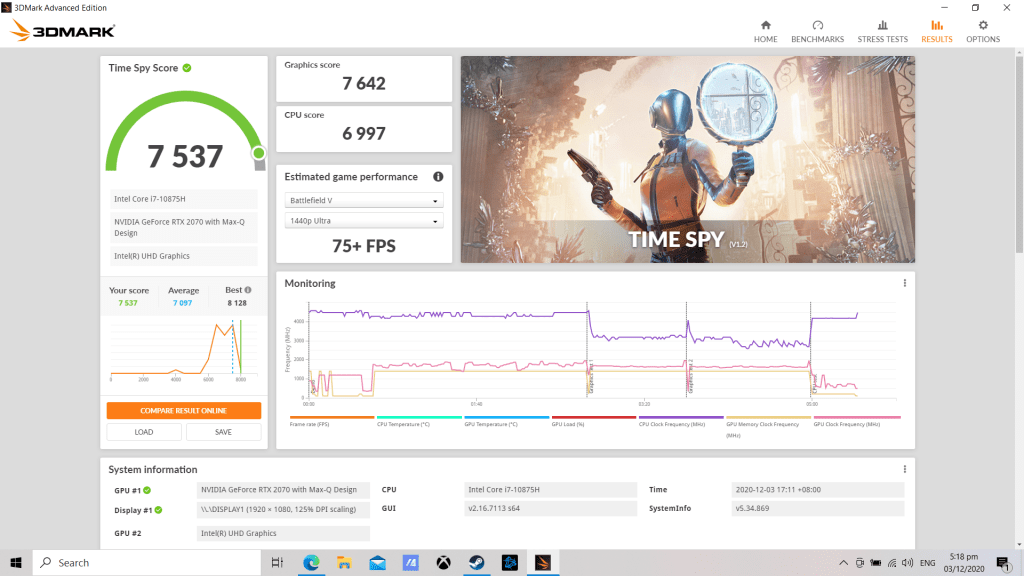 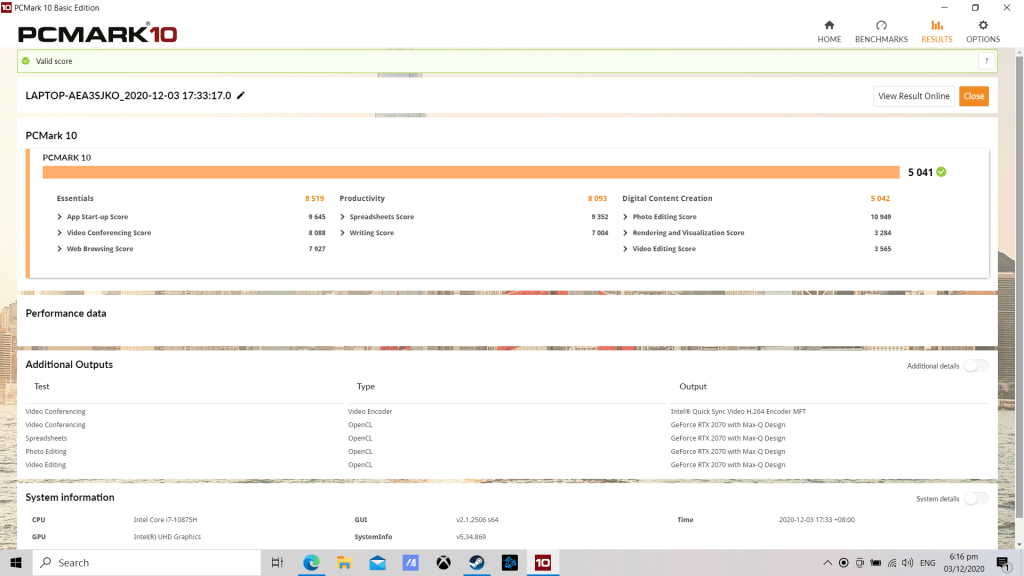 Finally, let’s look at the benchmark scores. On 3DMark Time Spy, the Zephyrus M15 produced a score of 7537, a great score overall. Meanwhile, the laptop had a PCMark10 score of 5041, meaning it should be up to the task for productivity.

Take note though, these gaming tests and benchmarks were ran while the M15 was set to Turbo on the ROG Armoury Crate. So don’t forget to put performance settings on Turbo to get the full power of the laptop.

Given it’s fairly high PCMark10 score, it comes as no surprise that the Zephyrus M15 is a great laptop for everyday use, as well as for general productivity. So if you are a hobbyist content creator or someone who works in an office, the Zephyrus M15 won’t disappoint power-wise.

As for battery life, the Zephryus M15 is pretty good for a gaming laptop. After running a 2 and 1/2 hour movie at 50% brightness and volume, the M15 still had around 65% remaining. This should mean the laptop can last for a couple of hours on a single charge; as long as you don’t play demanding games that is. 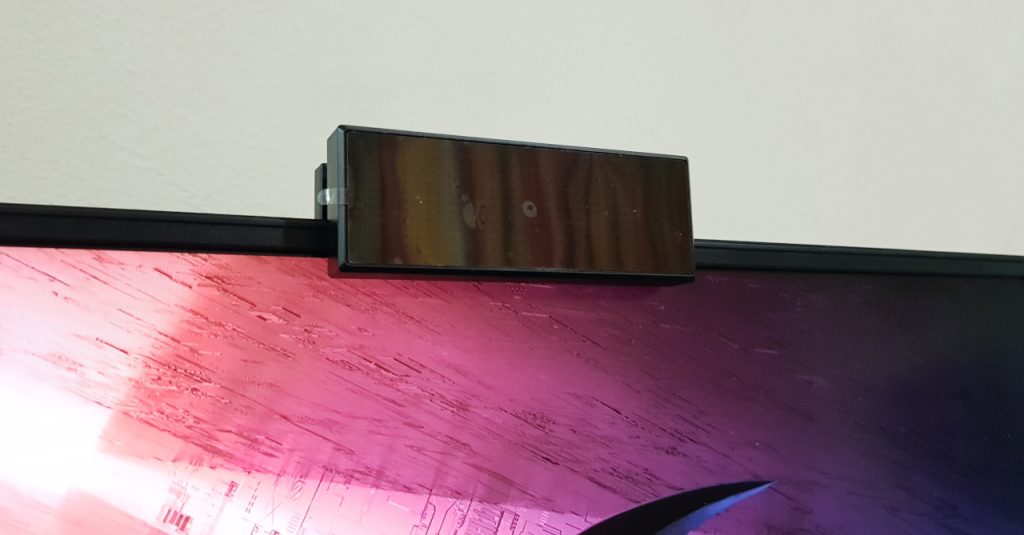 One thing to note with the Zephyrus M15 is that it lacks a built-in webcam. Thankfully, the laptop comes with an external webcam inside the box, which is a-must especially considering the current situation where online work/classes is the norm. 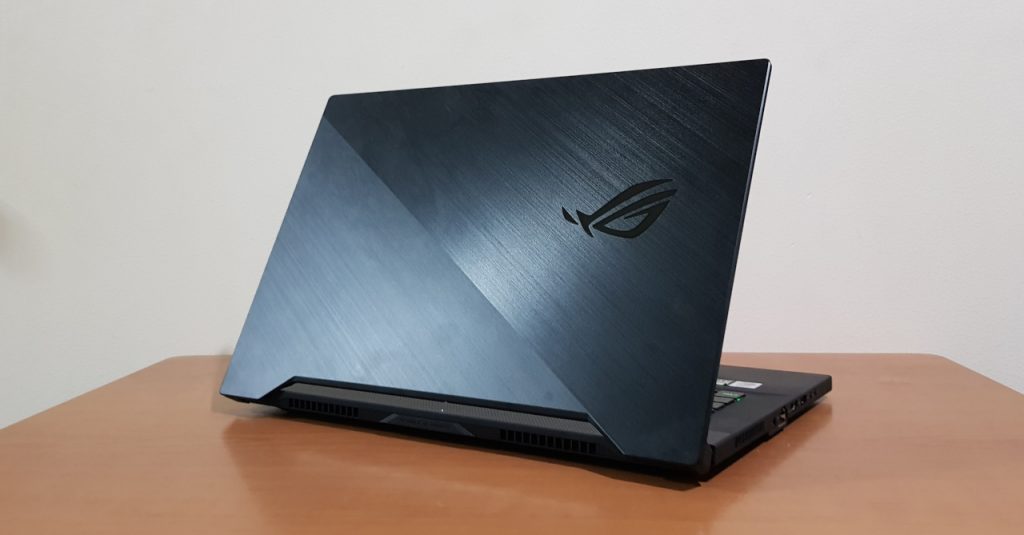 Thanks to its good-looking design, powerful gaming performance, and reliable everyday usability, the Zephyrus M15 is a great laptop for gamers who want a portable gaming machine with little to no compromise.

The only thing to take note of before buying it is its price. The ROG Zephryus M15 has a price tag of PHP 134,995–definitely not wallet-friendly. But if you want to splurge on a high-end gaming laptop, the Zephyrus M15 is a worthy choice.