Two screens are better than one! 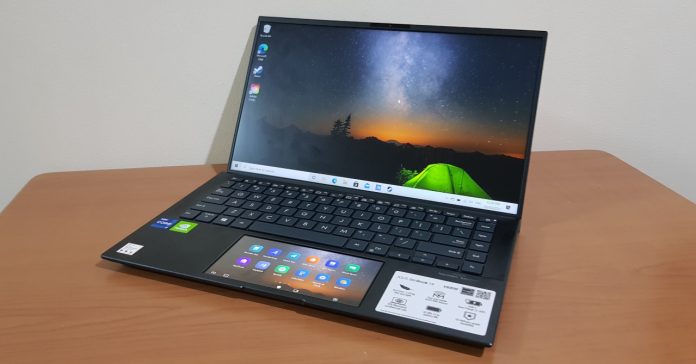 Last week, ASUS launched the ZenBook 14 UX435 in the Philippines, a 14-inch ultrabook that promises to be an excellent productivity partner thanks to its powerful internals and long battery life. Though this new ZenBook’s killer feature is no doubt the ScreenPad 2.0; in case you’re unfamiliar, the ScreenPad is a secondary touch display that takes the place of a standard trackpad. 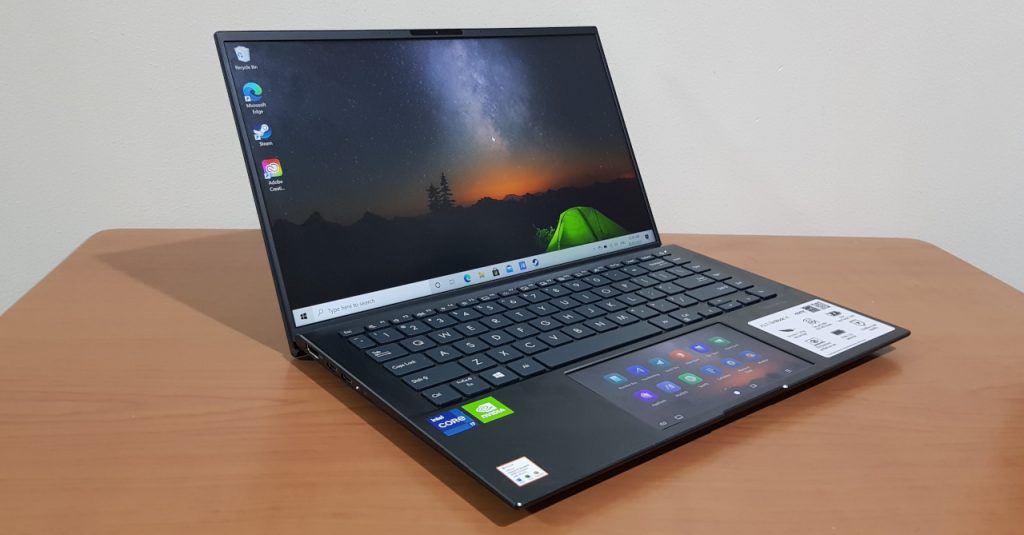 In our first impressions of the UX435, we found that it was a promising device that should fit the bill for working professionals. The inclusion of a dedicated NVIDIA GPU is also interesting as it makes the new ZenBook 14 an interesting proposition for content creators.

While it’s impressive on paper, does the ZenBook 14 UX435 deliver in actual use–be it for work or play? Find out here in our full review!

Take note though, this ZenBook 14 review is based on the i7 variant. The laptop also comes in an 11th gen i5 model. 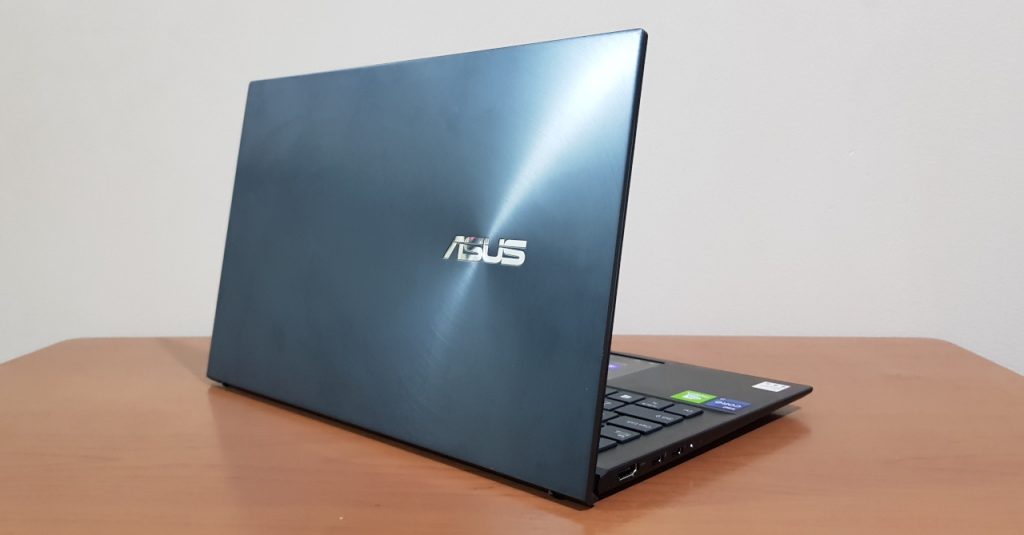 For the UX435’s design, ASUS went with the “if it ain’t broke don’t fix it” approach as the laptop looks very much like other ZenBook models. That’s not a bad thing though as the ZenBook 14’s concentric circle design, metal finish, and thin chassis all make for a laptop that feels nice and premium. Plus, the UX435 feels quite sturdy, meaning you shouldn’t be worried about putting it in your bag along with your other daily items. 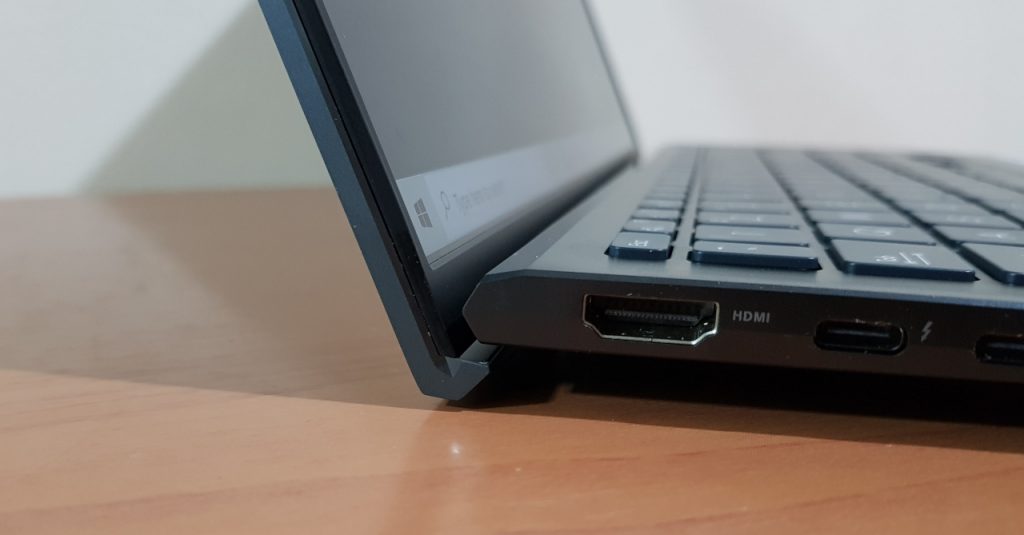 As with other ZenBooks, the UX435 packs the ASUS-signature ErgoLift hinge design. Not only does this lifting hinge prop up the laptop for more comfortable use, it also allows for better airflow–great if you work for extended periods of time.

For I/O, the new ZenBook 14 has 2 x Thunderbolt 4 USB-C, 1 x USB 3.2 Gen 1 Type-A, 1 x HDMI 2.0, 1 x 3.5 mm audio jack, and 1 x MicroSD Reader. As we’ve noted in our impressions, we would’ve wanted at least another USB Type-A port for peripherals, though the inclusion of an HDMI port and microSD card reader is definitely welcome. 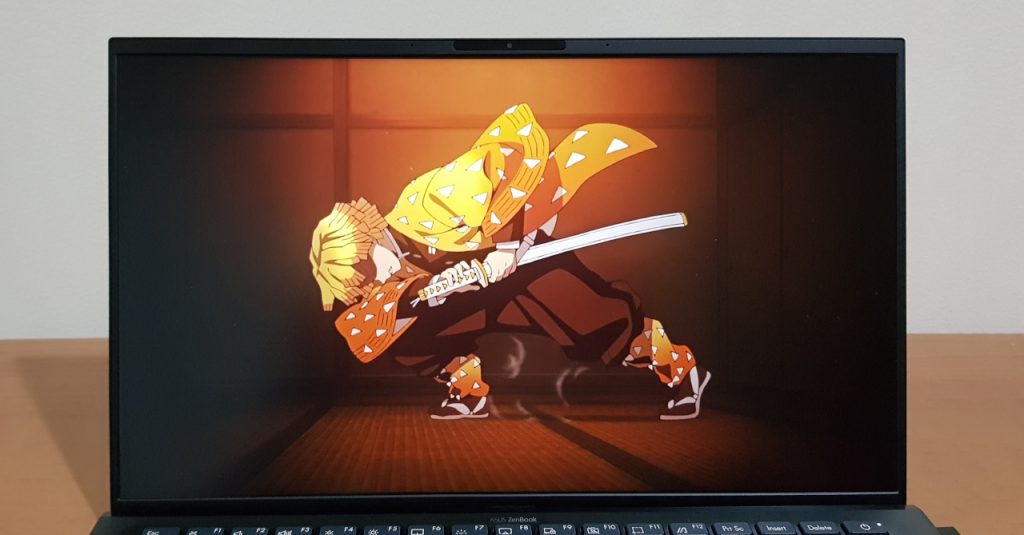 The new ZenBook packs a 14-inch LED-backlit FHD (1920×1080) 60Hz IPS-level display with 100% sRGB gamut and wide 178° viewing angles. Sure, the display may not be a true IPS screen, but for watching movies/shows, you won’t be disappointed as it looks sharp and has good colors (for casual entertainment at least). 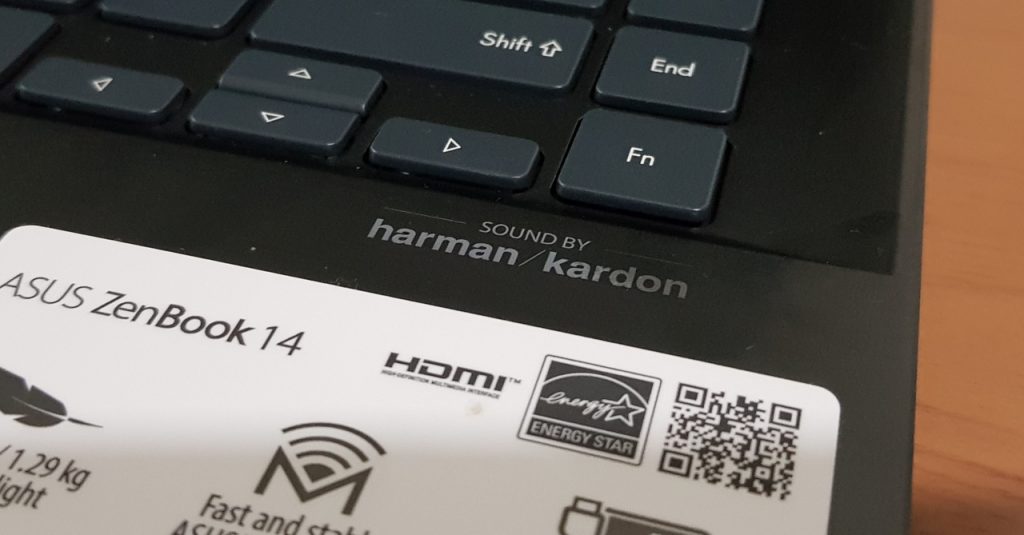 For audio, the ZenBook 14 features onboard stereo speakers that are tuned by Harman/Kardon. The speakers on the laptop are pretty good as audio quality is clear for movies and music (as long as you don’t mind the lack of bass). The only problem is that the speakers don’t get loud enough, meaning that for the best experience, headphones/external speakers are a must. 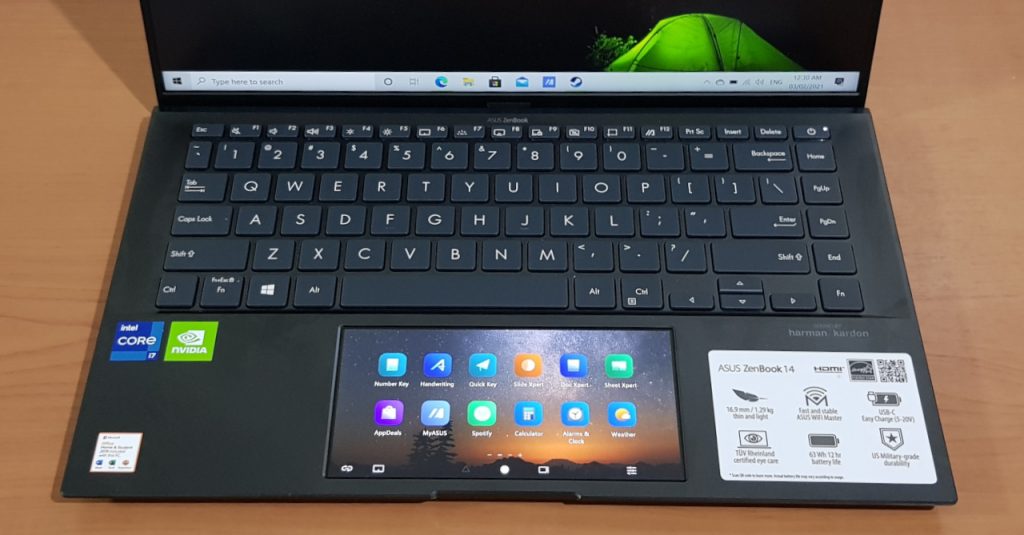 Even though the UX435 is slightly bigger than the ZenBook 13, both laptops have pretty much the same keyboard. This isn’t exactly a bad thing as the ZenBook 13’s keyboard had decently sized and spaced keys for comfortable typing. Though I would’ve preferred it if the keyboard on the UX435 was spaced out or enlarged a bit more to make use of the space on the sides. Still, this is far from a dealbreaker as the ZenBook 14’s keyboard is still great overall for an ultrabook. 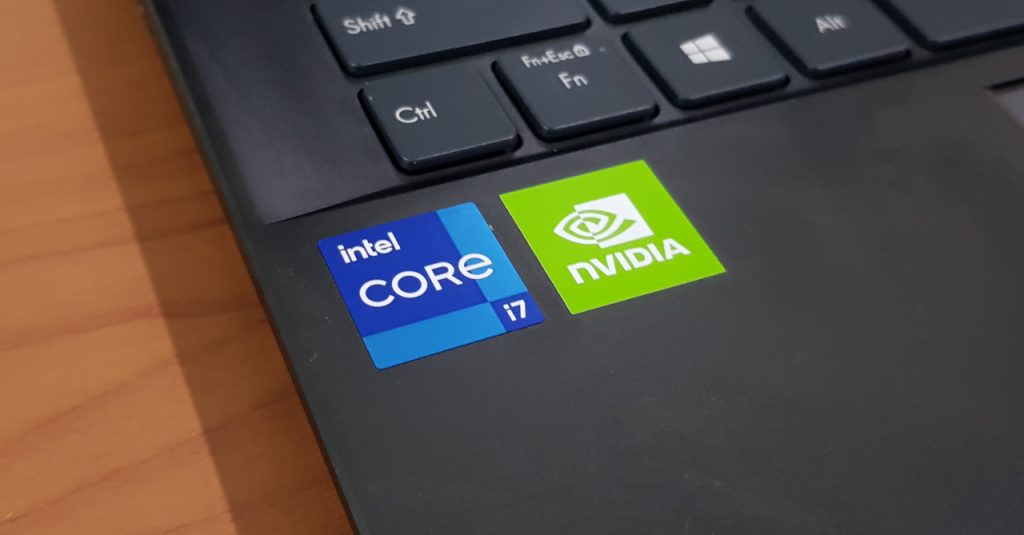 The ZenBook 14 is not a gaming laptop, but given that it is powered by up to an 11th gen Intel i7 processor and an NVIDIA MX 450 GPU, we just had to try out how well it can handle games. It turns out, the UX435 can handle esports titles, but not newer triple-A games. 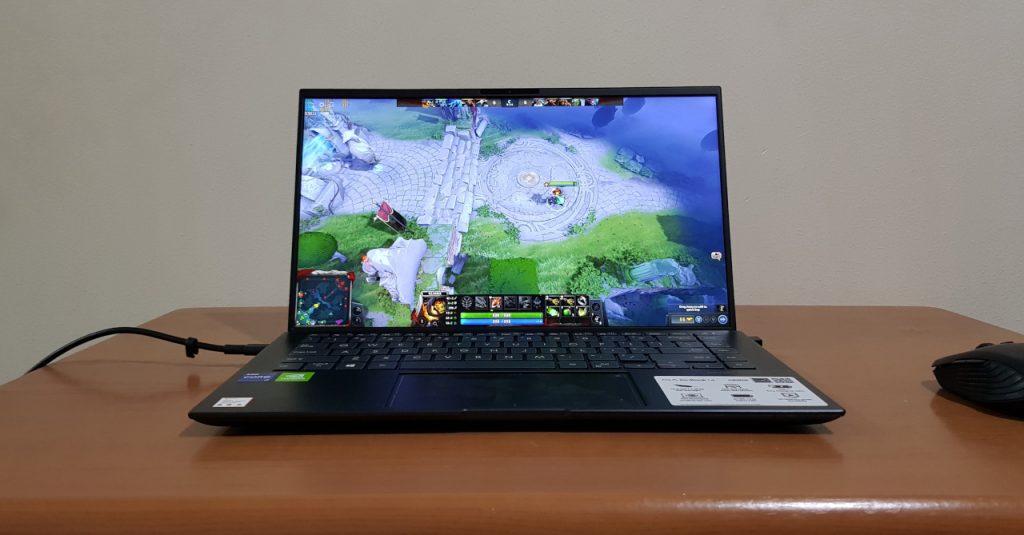 When I tried Dota 2, the game defaulted to the highest settings at 1080p, though there were frequent dips and hitches in that setting. Upon changing it to medium and at 1080p, the game ran at a fairly smooth 80FPS, with some dips in big teamfights. Overall not bad performance; just don’t play too long as the laptop can get hot when playing for extended periods.

Aside from esports titles like Dota, the ZenBook 14 can also run other, less hardware-intensive titles like Cuphead and Persona 4: Golden.

For newer triple-A games though, the ZenBook 14 doesn’t have enough juice. When I tried running Death Stranding, the game warned me that the laptop does not meet the recommended system requirements. When I tried playing, the game was dipping into 20FPS, even with settings turned down to low and resolution at 720p. 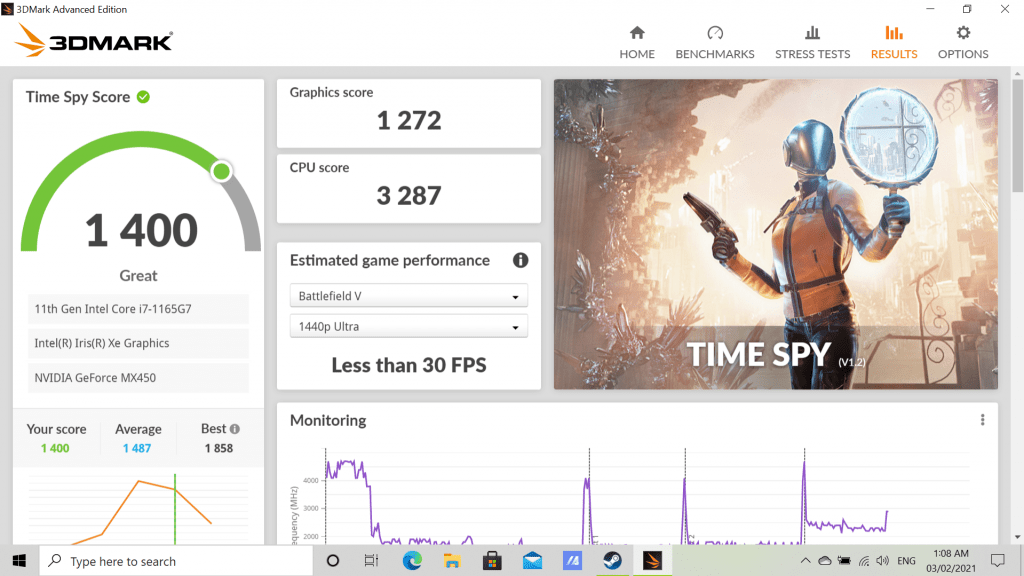 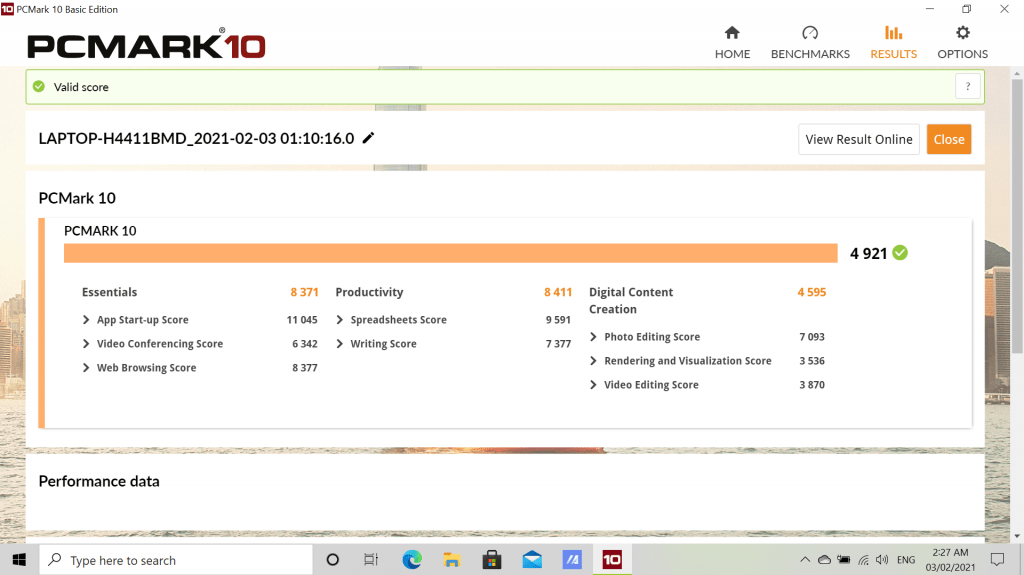 On 3DMark Time Spy, the ZenBook 14 scored 1400, while on PCMark10, the laptop had a score of 4921. Compared to the i5-powered ZenBook 13, the i7-powered 14 has a better overall productivity performance, meaning it should be better for office tasks and light content creation. 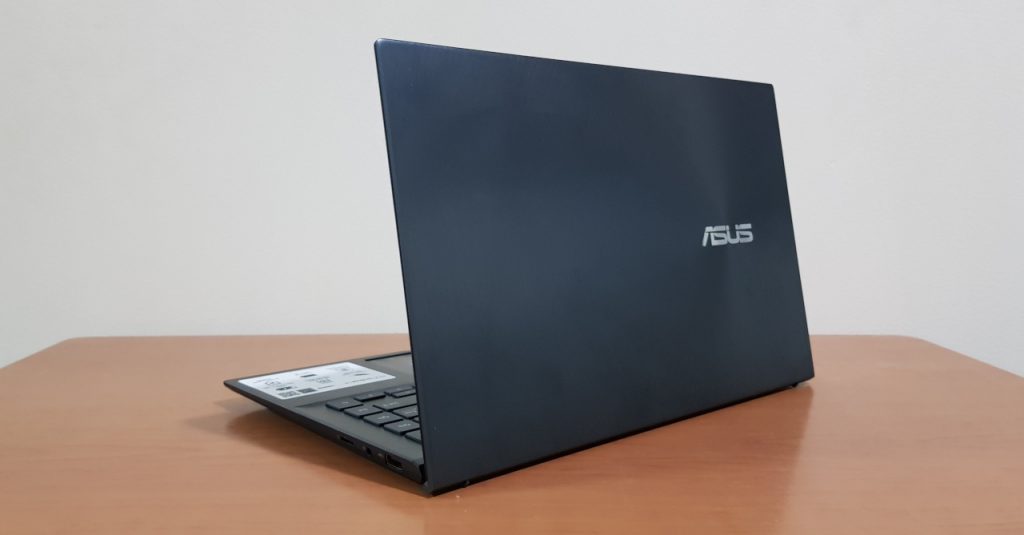 For day-to-day use, the ZenBook 14 UX435 delivers as it is fast and snappy for browsing, office applications, and even some light photo and video editing. Sure, it’s not exactly a pro workstation, but for office workers and college students, the ZenBook 14 has more than enough power. This is thanks not only to its CPU and GPU combo, but also because it packs 16GB of RAM. 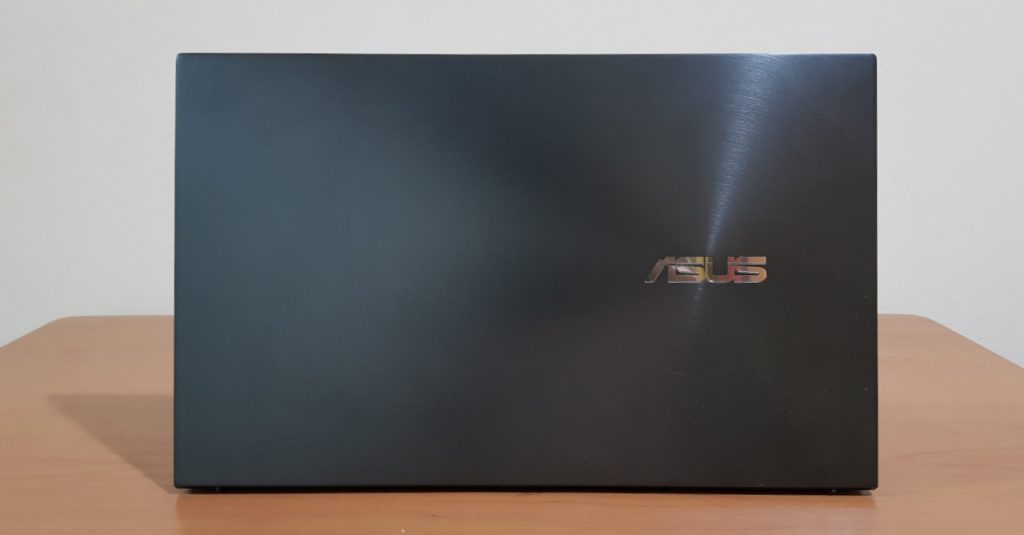 Battery life-wise, the new ZenBook 14 impresses. After playing a 2 and 1/2 hour movie at 50% brightness and volume, the laptop still had 70% remaining; that’s with the ScreenPad turned on and the laptop connected to Wi-Fi throughout. Thank to this, expect the UX435 to last over 7 hours in standard use (such as browsing, movie-watching, or working on documents/presentations).

As the ScreenPad 2.0 is the laptop’s highlight feature, it deserves its own part in the review. This is because it’s less of a glorified touch pad and more of an actual secondary display.

First off, the ScreenPad has a nifty smartphone-style UI that easily lets users launch apps on the display, be it a calculator, weather monitor, or even a handwriting app. Thanks to this, multitaskers will have a great time with the ZenBook 14 as they won’t have to wrestle with balancing multiple windows on just one display. 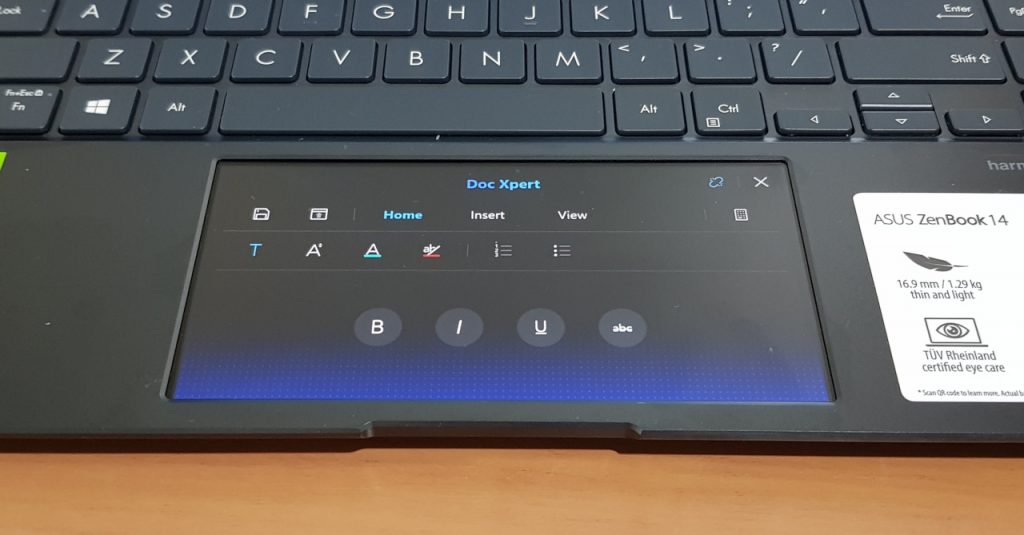 Another great thing about the ScreenPad is that there are certain apps that take advantage of it. For instance, Microsoft Word, Excel, and PowerPoint (which the ZenBook 14 comes with for free) are able to use the secondary display, giving users quick access to text editing. This has a lot of uses, especially if you’re outside and forgot to bring a mouse. 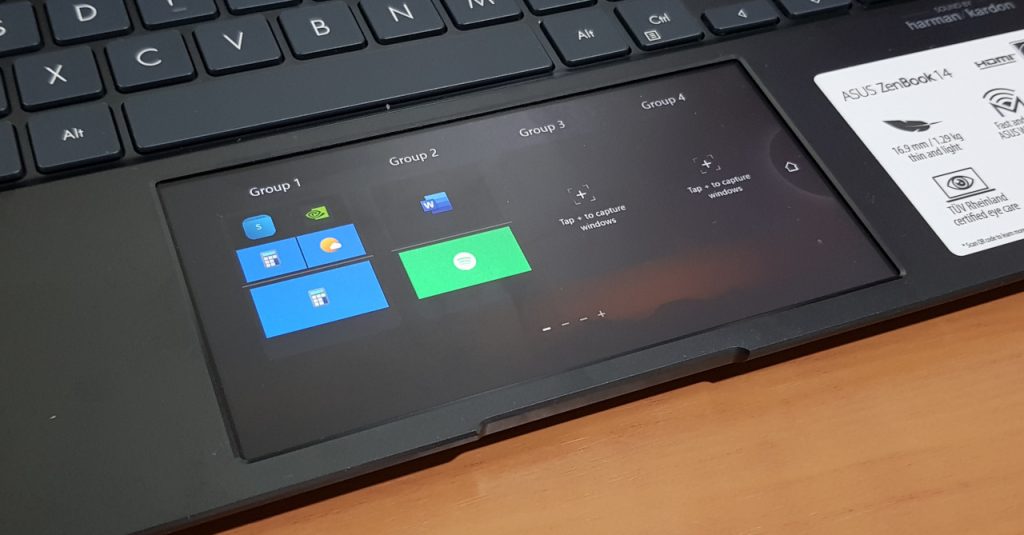 Another nice feature that will help productivity is Task Groups, a feature also used in the ZenBook Duo laptops. Basically, this feature lets you capture and save the apps that are currently open on both the main display and the Screenpad. Once saved, clicking on the selected Task Group will open the apps.

With this, you can set up groups of apps that fit your different work/study needs. For instance, you can set up a Task Group to open Word on the main screen and Spotify on the ScreenPad if you need to write an article/essay (as a lot of people including myself use music to focus. 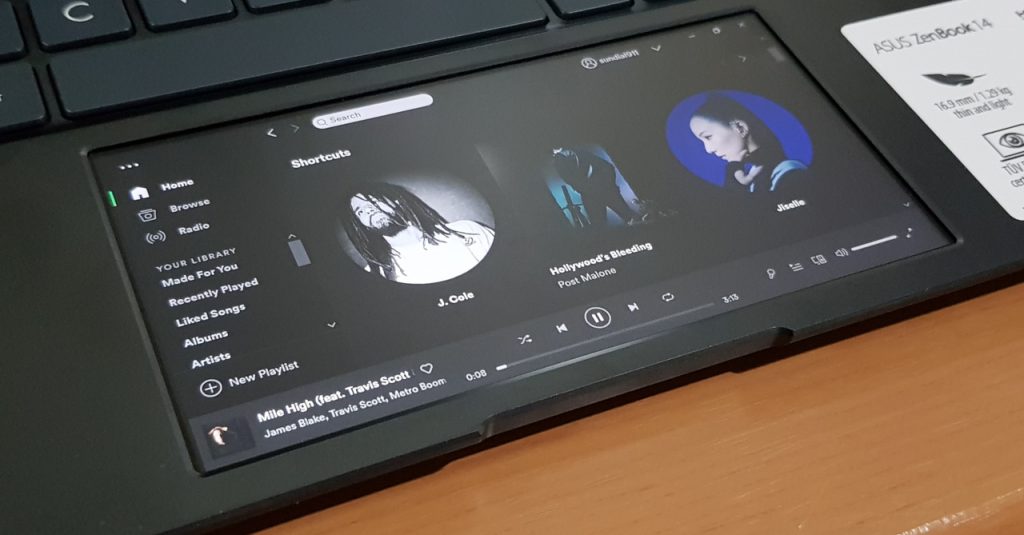 Even though it’s a small display, the Screenpad 2.0 opens full version of the apps of your choice. And while you can use the touch display to control these apps, you can also use a mouse, meaning it pretty much acts like a secondary screen.

You can even try playing some casual games and watching videos on the ScreenPad,  though I don’t recommend watching a full movie or an NBA game on it. 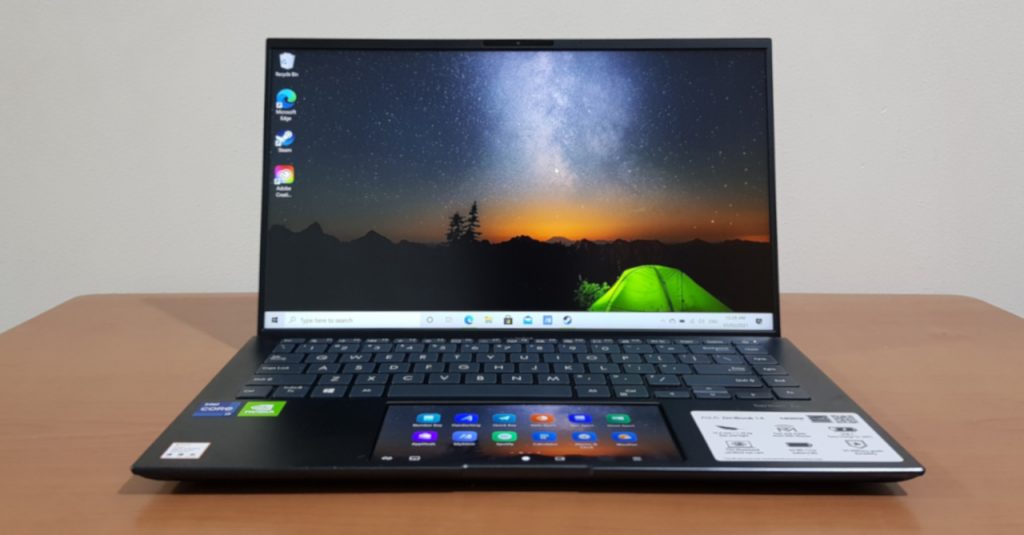 Overall, the ASUS ZenBook 14 UX435 is an excellent premium ultrabook for working professionals and students. This is thanks to capable hardware, long battery life, and the inclusion of the ScreenPad 2.0 which boosts its multitasking capabilities. Coupled with its solid build quality and good display, ASUS’ latest laptop is sure to satisfy.

Of course, there are some limitations. For one, don’t expect to game heavily on this machine. And while it can handle light video editing, for professional content creators, the ZenBook 14 UX435 will likely not have enough power as it is not a true workstation. These limitations are not dealbreakers though, especially as ultrabooks like the ZenBook 14 are not made for these tasks.

- Advertisement -
Previous article
An Avatar: The Last Airbender and Legend of Korra-based tabletop RPG is in the works
Next article
‘Lunar Beast’ event for League of Legends: Wild Rift is now live