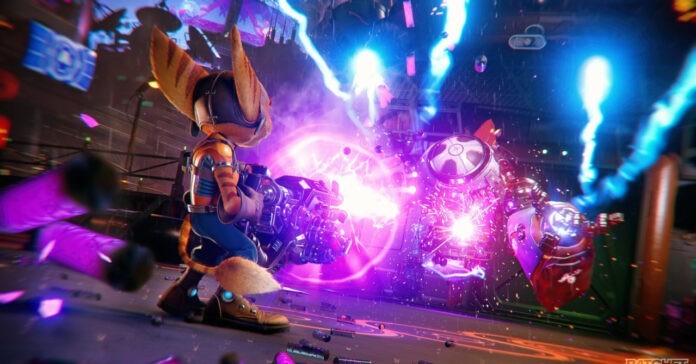 Following the release of a new trailer, PlayStation has now showed off more gameplay footage of Ratchet & Clank: Rift Apart in the recent State of Play stream. The gameplay showcase is 16 minutes long (more than double that of the first gameplay reveal).

The new Rift Apart gameplay showcase shows off lots of action featuring the game’s two playable characters: Ratchet and Rivet. Though the highlight of the showcase is no doubt the game’s jaw-dropping visuals that look truly next-gen!

Check out the State of Play showcase for Rift Apart here:

While the game’s graphics are incredible, that’s not the only thing impressive about this new look at gameplay. For one, Rift Apart gives Ratchet and Rivet enhanced mobility, meaning traversal will be a bit more challenging (and fun). The game will also have brand-new weapons, as well as returning items that should delight long-time R&C fans.

The Rift Apart State of Play stream also highlighted some of the ways that the game takes advantage of the PS5’s capabilities. In one boss fight, the game is shown to instantly load a different world thanks to the speed of the SSD. Rift Apart will also take advantage of haptic feedback and adaptive triggers; for example, most weapons will have different firing modes depending on if you press the R2 button halfway or fully.

Finally, developer Insomniac has confirmed that Gold Bolds, the Arena, and Clank Puzzles will make a return in Rift Apart, meaning there should be a lot of content to enjoy even after the game’s main story.

- Advertisement -
Previous article
OPPO launches the A74 5G in the Philippines, priced at PHP 15,999
Next article
Among Us is coming to PS4 and PS5 with an exclusive Ratchet & Clank skin