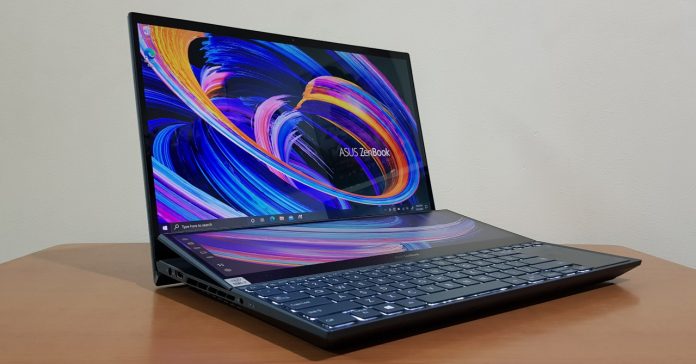 For one, the new Pro Duo’s secondary display (the ScreenPad Plus) now comes with a lifting mechanism that raises it up for a better viewing angle, similar to the one found in the new ZenBook Duo. Aside from this design change, the laptop also packs more powerful hardware, including a 10th gen Intel Core i7 processor, as well as an RTX 3070 Studio edition GPU. On to of these, the laptop also has a 4K OLED main display. 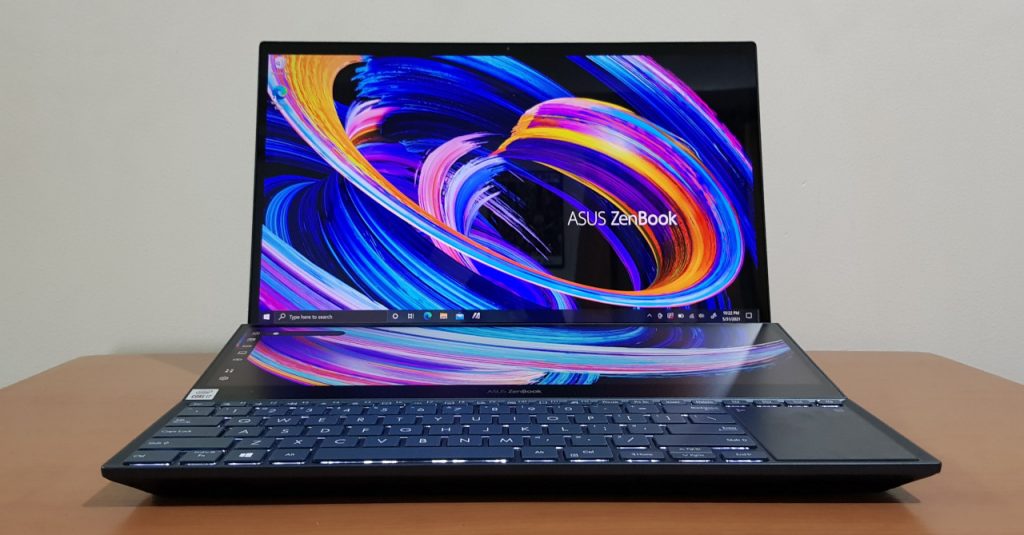 Based on the specs sheet, the ZenBook Pro Duo has practically everything a serious content creator needs. But how well does it hold up in real-world use? Find out here in our ASUS ZenBook Pro Duo OLED (UX582) review! 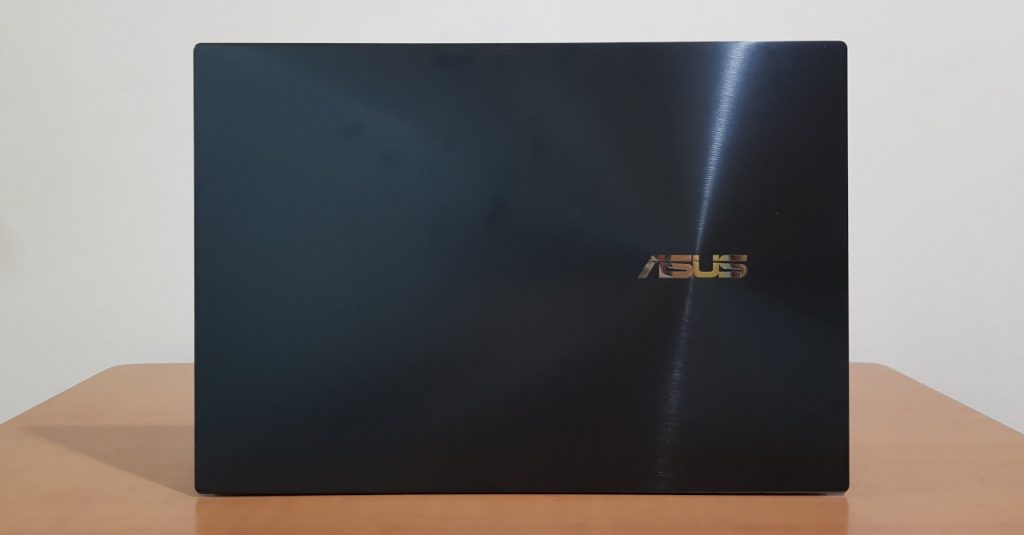 As with most ASUS notebooks we’ve reviewed recently, the OLED looks similar to most ZenBook laptops when viewed from the back, given that the Pro Duo also has the signature concentric circle design and brushed metal finish. What does separate it a bit from other ZenBooks is its size – the OLED is noticeably bigger than most other laptop that ASUS has released recently.

Once you view it from the front though, what will most likely draw your eyes is the laptop’s ScreenPad Plus, a large secondary touch display on the bottom. While we already liked the previous Pro Duo’s ScreenPad, the new Pro Duo has a better-designed one as it lifts up when the laptop is opened. This means you can more clearly see and use the secondary screen.

For I/O, the ZenBook Pro Duo OLED comes with 2 x Thunderbolt 3 USB-C, 1 x USB 3.2 Gen 1 Type-A, 1 x full size HDMI 1.4, and 1 x 3.5 mm audio jack. As we noted in our impressions, we’re satisfied with the UX582’s connectivity options, though we would’ve wanted more USB Type-A ports, as well as an SD card reader. After all, for a content creator, having an SD card reader is pretty much a requirement. 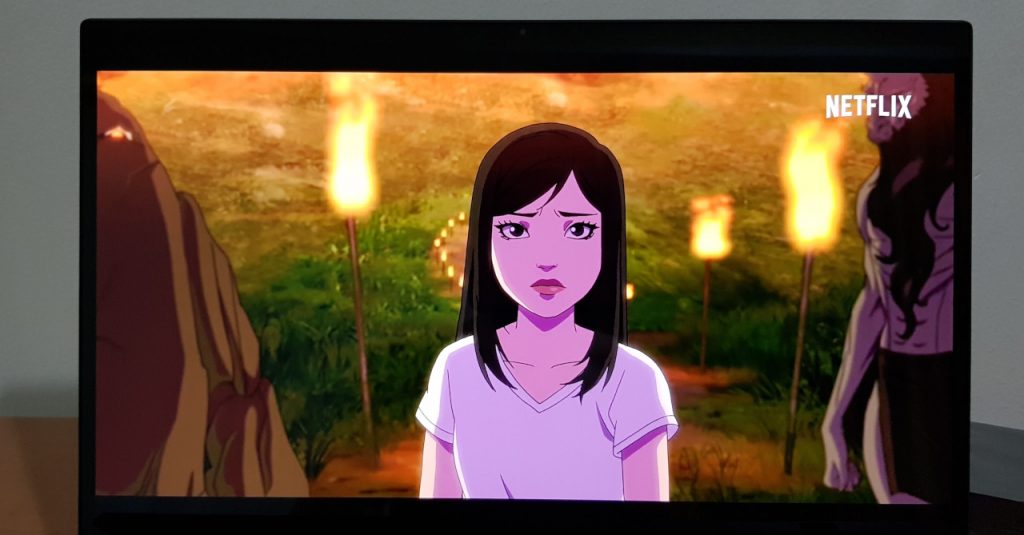 Moving on to the display, the refreshed ZenBook Pro Duo comes with a 15.6-inch 4K OLED screen. For comparison, the original Pro Duo also has a 15.6-inch 4K display, but it is not an OLED screen. This means the laptop is a big improvement for binge-watching. If you love watching movies/shows, the new ZenBook Pro Duo is a great match as it has a high resolution, as well as vibrant color output.

Aside from binge-watching though, the screen is also Pantone validated, which should mean it is a good match for content creators who need a more color-accurate display. 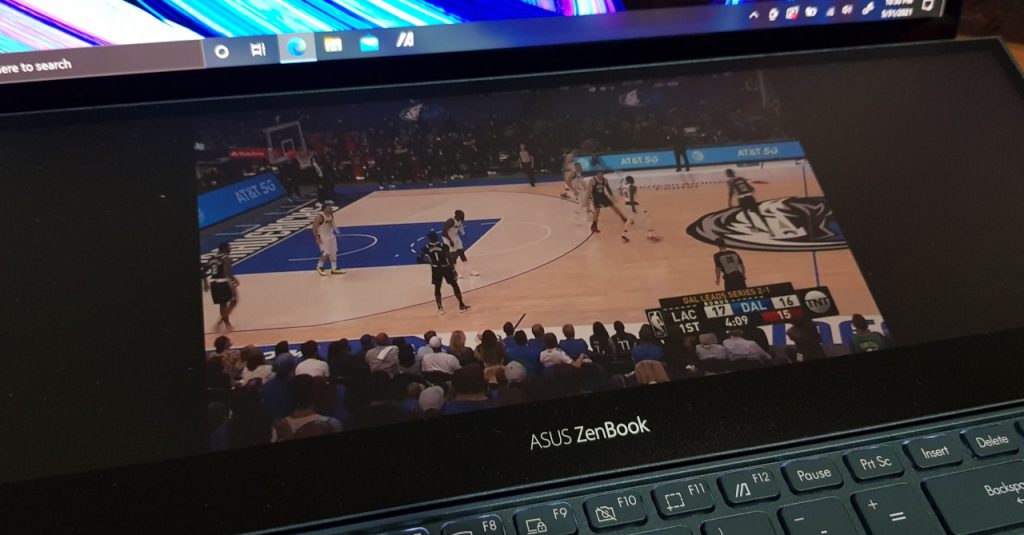 While watching movies/series on the ScreenPad Plus isn’t ideal, I actually found a nice use case for it. Specifically, I used the second screen to watch NBA Playoff games while working, and the ScreenPad Plus worked quite well for this. Even though it is not an OLED screen, the secondary display still uses an IPS-level panel that lets it get quite bright; plus, it has a 4K resolution as well. 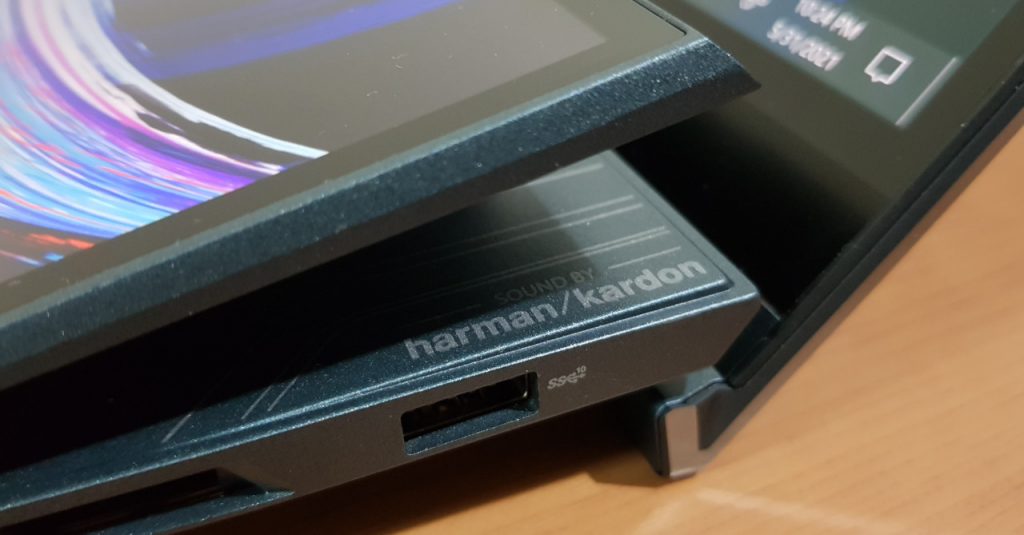 As with most ZenBooks, the Pro Duo OLED comes with internal speakers that are tuned by Harman/Kardon. When I tried the onboard speakers out with some of my favorite tracks, I found the audio quality to be pretty nice, but its output is a bit too quiet, even at max volume. Because of this, external speakers or headphones are recommended if you’re going to watch, listen, or work on this notebook. 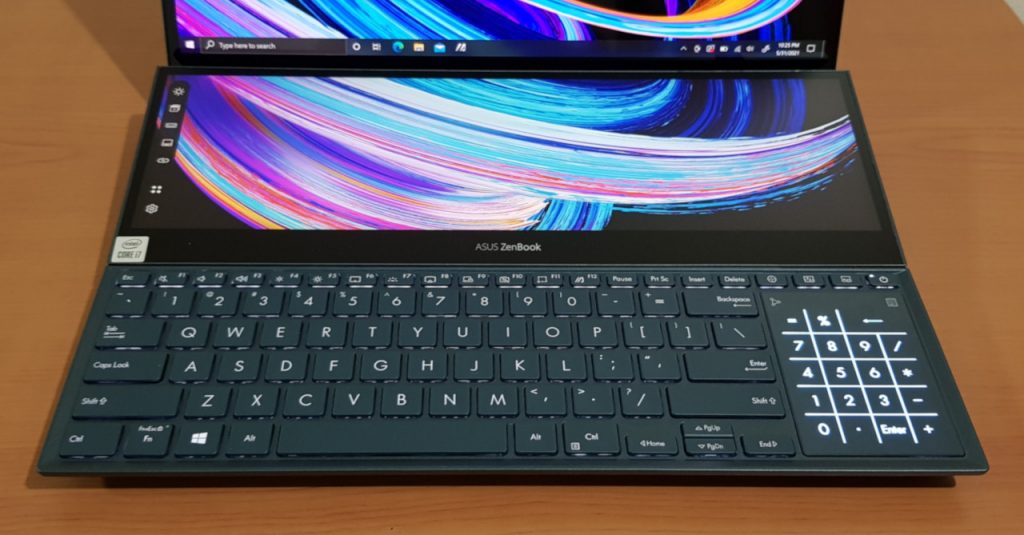 Given that the ZenBook Pro Duo has a large secondary touch display, there isn’t much space left for a keyboard. Thankfully though, I found the keyboard on the Pro Duo OLED to feel quite good for typing, even with the seeming lack of space. The addition of ASUS’ signature Numberpad on the trackpad is also a nice touch.

One thing that’s not ideal though is the placement of the keyboard, especially as most laptops with keyboards closer to the screen, giving your wrists a place to rest. 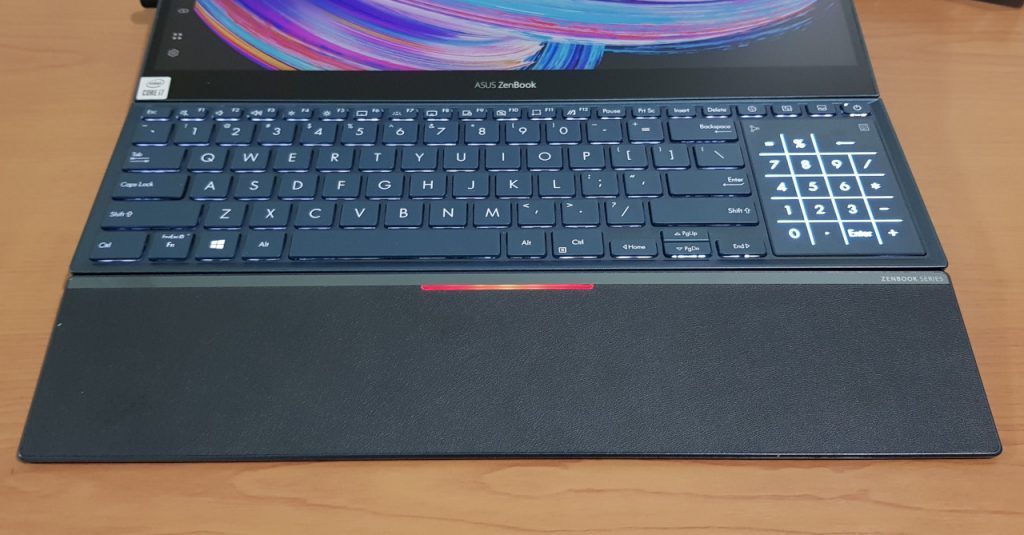 Given this, ASUS packed the ZenBook Pro Duo with a wrist rest inside the box. While I would’ve liked for the wrist rest to have an attachment mechanism, it’s still a nice inclusion. If you’re using the Pro Duo on a table, you should definitely use the includes wrist rest as it makes for a more comfortable typing experience.

As mentioned above, the ZenBook Pro Duo OLED is powered by a 10th gen Intel Core i7 processor along with an RTX 3070 Studio edition GPU, making it a powerhouse of a laptop that rivals even gaming laptops in terms of specs. And while the GPU is marketed more for content creations, it should also have enough power for some gaming. In our tests, it did not disappoint! 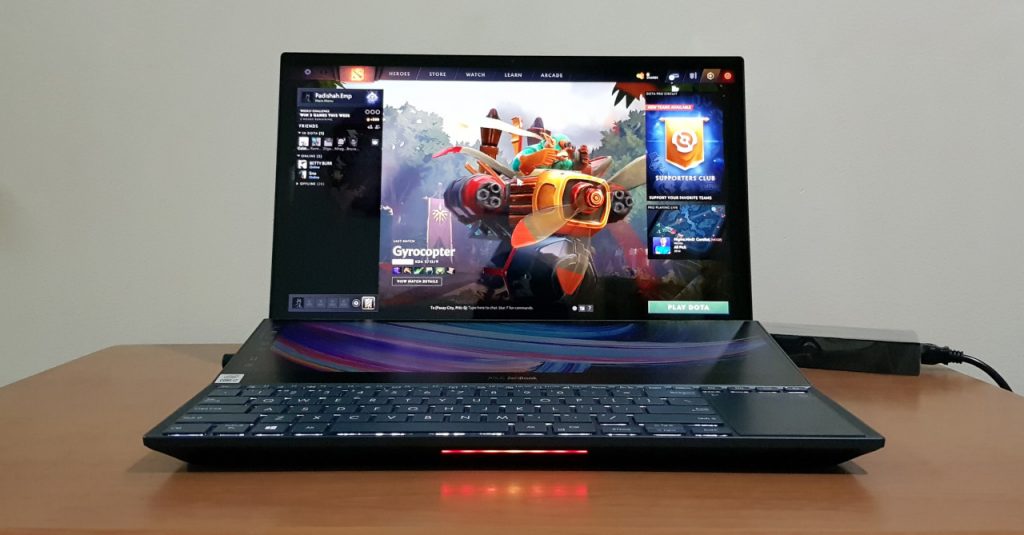 Firstly, the ZenBook Pro Duo OLED is easily able to handle esports titles at 4K. For example, Dota 2 ran at with an average of 69.7 FPS at the max graphics settings and at 4K. Meanwhile, Overwatch ran at 69.8 FPS at the Ultra graphics setting and at 4K resolution. If you like playing esports titles in your downtime, the ZenBook Pro Duo does not disappoint, even if it’s not a gaming laptop. 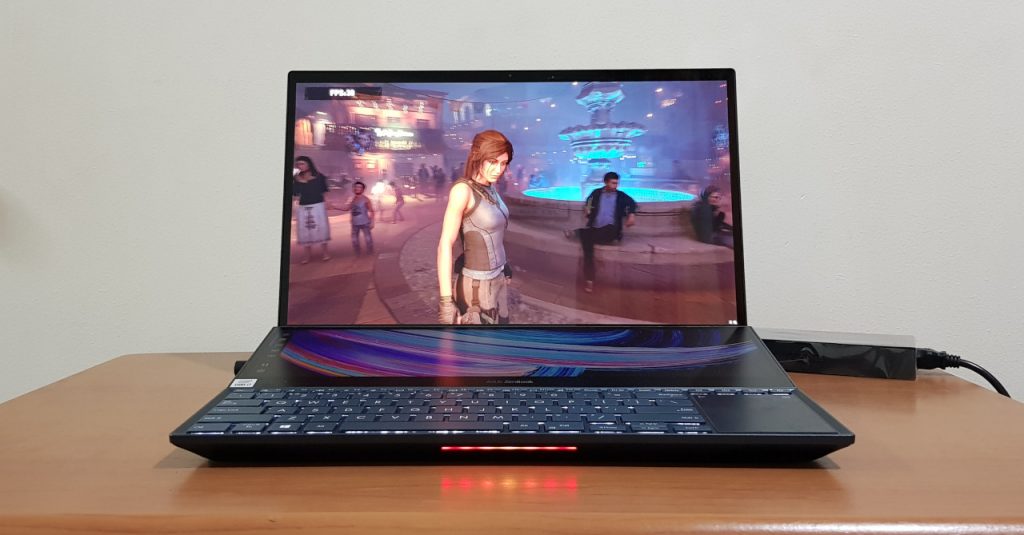 Given that the RTX 3070 is quite a powerful GPU, it’s no surprise that it can also handle triple-A games. For instance, Shadow of the Tomb Raider averaged 43.4 FPS at the High graphics settings and at 4K. Even Control ran at a playable 41.4 FPS on High at 4K (with RTX off).

If you do want to play triple-A games on the ZenBook Pro Duo, we suggest turning the resolution down to 1440p for a faster and smoother framerate. Also, the laptop does get noticeably warm when playing, so if you need a laptop for games more than content creation, a dedicated gaming laptop might be a better option. Though if content creation is your primary need but want to game on the side, the ZenBook Pro Duo OLED will not disappoint. 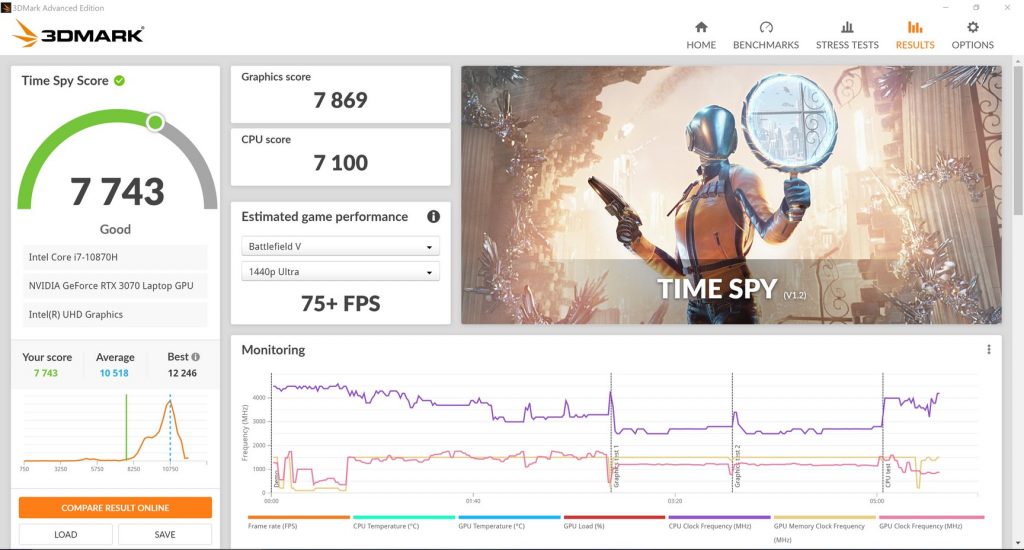 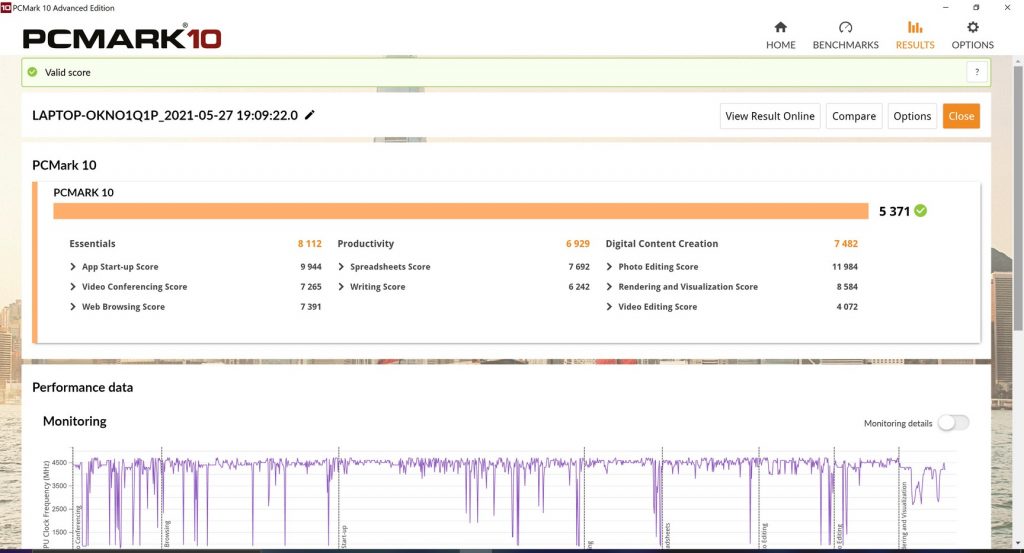 For benchmarks, the laptop got a score of 7743 on 3DMark Time Spy and 5371 on PCMark 10. While the PCMark score may seem a bit modest given its specs, the laptop did score 7742 for Digital Content Creation, meaning it should be a great fit for photo and video editing, and not just for hobbyists. 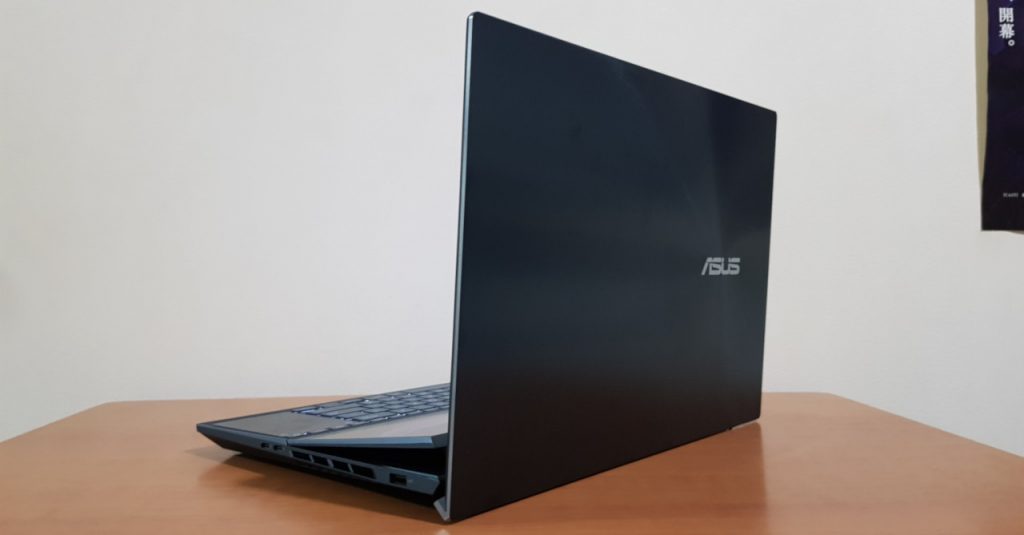 Thanks to its near top-of-the-line specs, it’s no surprise that the ZenBook Pro Duo 15 OLED is a reliable daily driver. As mentioned above, this new ASUS laptop is a great fit for content creators who do a lot of photo/video editing, especially as its secondary display is excellent for streamlining workflow; you won’t need to keep switching between windows when multitasking. 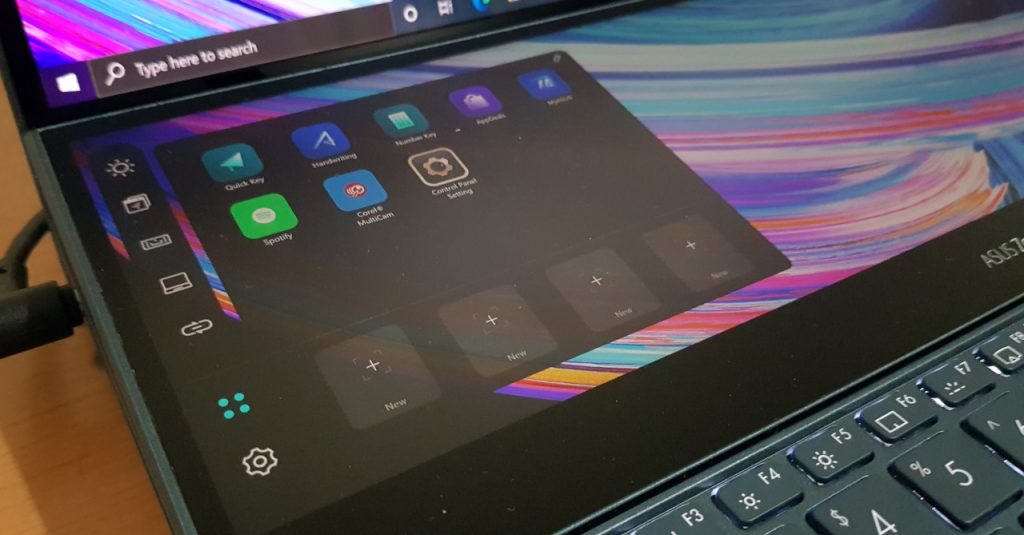 Aside from acting as a secondary screen to put your apps in, the ScreenPad Plus also has other nifty features, including a calculator, handwriting app (the laptop comes bundled with an ASUS stylus), and more. You can even add more apps on it if you need to, making it a versatile feature that’s more than just a simple screen add-on. 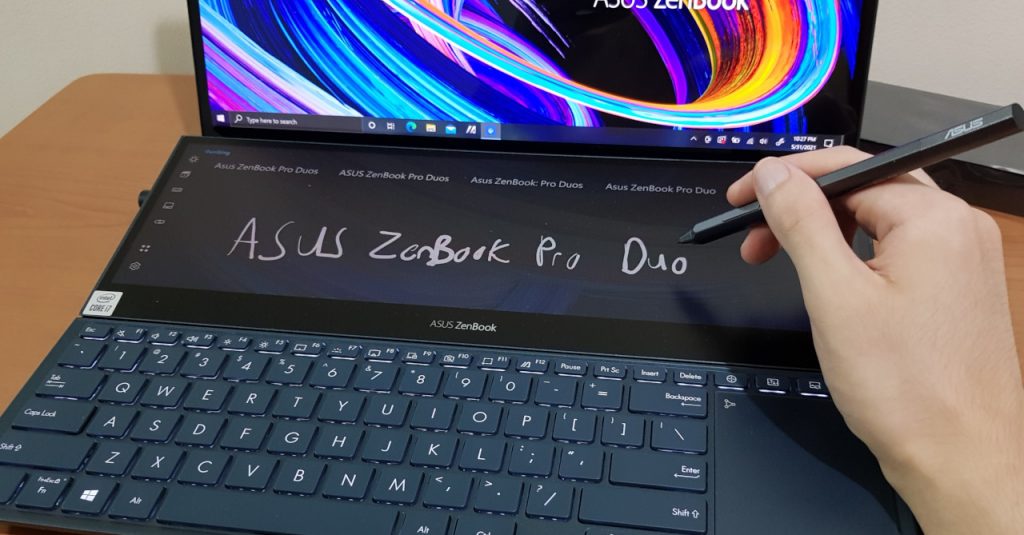 Now for battery life. In our battery test where we run a 2 and 1/2 hour movie at 50% brightness and volume (with Wi-Fi on), the ZenBook Pro Duo 15 OLED still had 59% of charge remaining. While it’s not as long-lasting as other ZenBooks, this is still a good result overall, especially considering it has to power two touch displays. So expect around 5-7 hours of use on a single charge. Though if you want to edit videos or work on content, you may want to seek a power outlet. 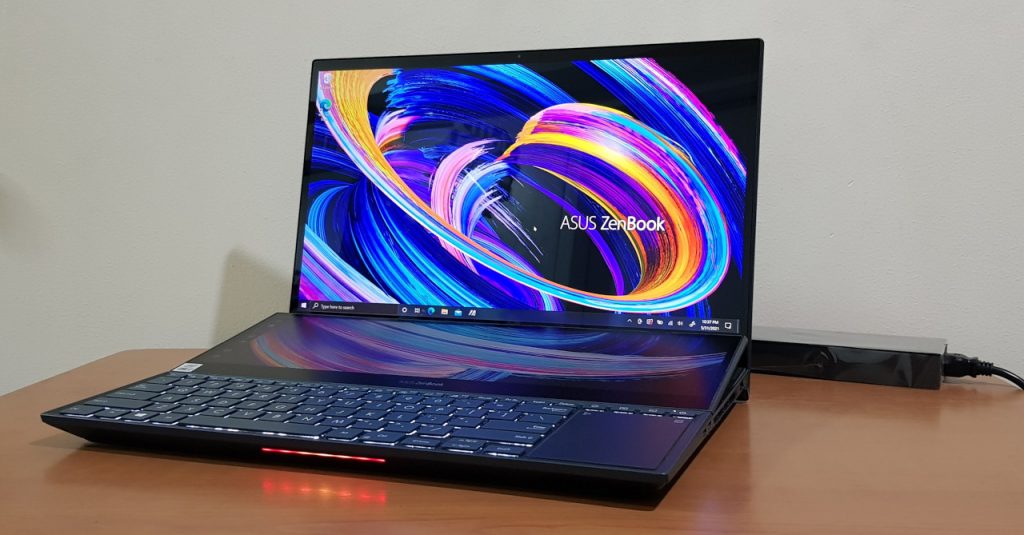 Thanks to its powerful performance, improved design, and great screens, the ZenBook Pro Duo 15 OLED is an excellent laptop, especially for content creators who need a high-performance laptop for their photo and video editing needs.

Its price does not come cheap though; the ZenBook Pro Duo 15 OLED is priced at PHP 169,995 for the Intel Core i7 variant, and a whopping PHP 199,995 for the i9 model. The Pro Duo 15 is definitely expensive, but given its feature set and specs, it is worth it for users who want the best content creation laptop.

- Advertisement -
Previous article
PS5 gets another wave of pre-orders in the Philippines on June 11
Next article
Ratchet & Clank: Rift Apart – The Best Weapons in the Game