Rift Apart is a blast! 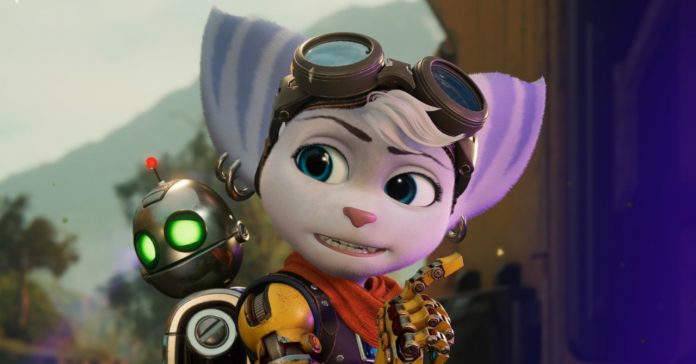 It’s been a while since the last major entry to the Ratchet & Clank series. If you don’t count the 2016 Ratchet & Clank title (which was essentially a remake of the first game), you’ll have to go back to 2013’s Into the Nexus which released for the PS3 for the latest game in Insomniac Games’ series. Though Ratchet & Clank isn’t the only series of its kind to have been put “on ice” over the years, with PS2 classics such as Jak & Daxter and Sly Cooper also being pretty much shelved in exchange for more serious and less cartoony titles.

That’s all set to change with the release of Ratchet & Clank: Rift Apart. While Insomniac is more popular now for its two PlayStation-exclusive Spider-Man games, the studio went back to the Ratchet & Clank universe (well, more like multiverse) for its latest PS5 exclusive. 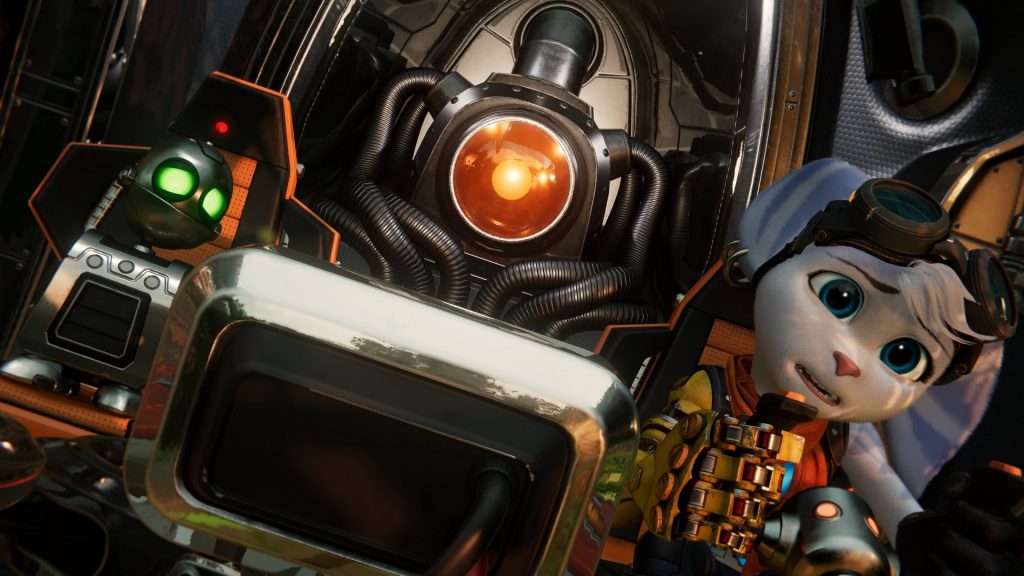 A new Ratchet & Clank game has definitely been a long time coming, and Rift Apart promises to satisfy long-time fans as well as series newcomers. But does the cartoony 3D action formula of the series make for a compelling playthrough today? After all massive, open-world games are pretty much the norm now for single-player titles.

Well, Rift Apart definitely delivers an enjoyable and fun time, and it proves that there’s still a lot of life in the series. But more importantly, it is a game that, much like the recently released Returnal, takes full advantage of the power of the PS5.

While Returnal was an excellent showcase of the PS5’s capabilities in terms of near-instant loading and general performance, it doesn’t exactly have visuals that scream “generation leap.” That is not the case with Rift Apart; simply put, the new Ratchet & Clank game might just be the best-looking game I’ve played on a console. 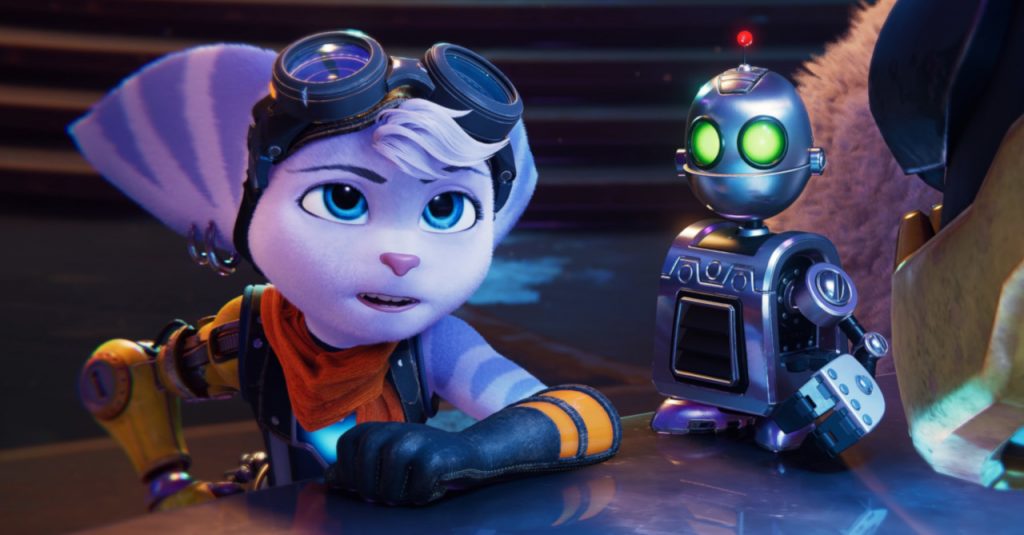 Now, I have played lots of visually stunning console titles; just last year, there was FF7 Remake, The Last of Us Part II, and Ghost of Tsushima. But while those games looked great, Rift Apart just had them beat in terms of detail. While in other games, you might see some textures that look a bit off or low quality (I’m looking at you, doors in FF7 Remake), but in Rift Apart, the level of detail of practically everything in the game’s world look excellent, especially in the Fidelity graphics mode as it features ray tracing and a dynamic 4k resolution. Obviously, this is not a game that goes for a realistic style, so it is a bit unfair to compare it with other games (not to mention that they’re designed for older hardware). But if you really want a PS5 game with visuals that can truly wow you, this game is it.

While having beautiful graphics is great, it shouldn’t come at the cost of performance. Thankfully, Rift Apart ran with a smooth 30FPS with no noticeable drops on the Fidelity graphics mode. The game also ran at a stable 60FPS on both the Performance and Performance RT modes when I tried them. As for which setting to use, it will depend on if you prioritize framerate or better graphics, and if you play on a 4K display. If you use a standard Full HD screen, Performance RT mode is my recommendation. If you’re on a 4K screen though, go for the faster Performance mode if you’re like me and prefer 60FPS.

My playthrough wasn’t exactly smooth sailing throughout though as I experienced some bugs and crashes in my time with the game. Though a lot of these should be fixed in the Day 1 patch. 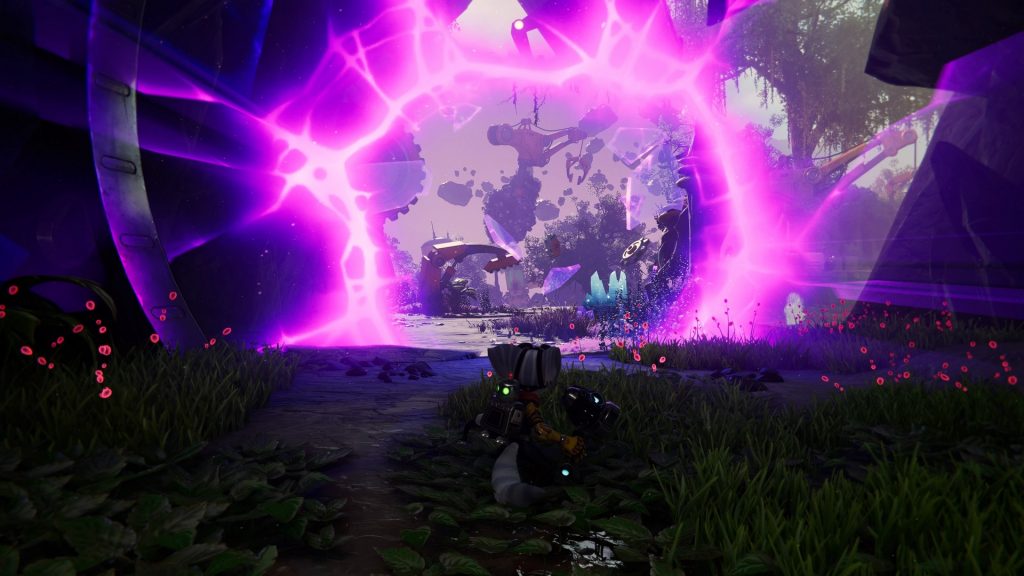 Aside from having stunning visuals and a stable framerate, Rift Apart also has pretty much no loading times thanks to the SSD. But that’s not the only way that the game takes advantage of the SSD. In Rift Apart, there are “rifts” throughout the various worlds which you can use to instantly teleport to a new position, or even to a new level seamlessly. There’s even a world where you shift between different dimensions to traverse obstacles. This kind of seamless shifting between levels is simply not possible in past consoles, making this game an excellent showcase of the capabilities that future PS5 games have. Even on its own though, the game’s dimension-hopping is just straight up cool.

What’s also cool is the implementation of the DualSense controller. Rift Apart’s use of haptic feedback is almost to the level of Astro’s Playroom as you can even feel the difference in texture of which surface Ratchet (or Rivet) is walking through. Along with this, Rift Apart also takes advantage of the controller’s adaptive triggers. For instance, pressing the R2 button halfway let you shoot the shotgun weapon once, while pressing it fully will unload a flurry of shots. There’s even a pulsing feedback that you feel when pressing the R2 button fully to fire the blaster pistol on full auto.

The game’s use of the DualSense features definitely help enhanced my experience, but they can feel a bit too much at some points, especially the adaptive triggers. While the constant resistance on the triggers didn’t tire me out, I can see that some people may get tired or get finger cramps when playing for hours. Thankfully, the game allows you to tone down the level of haptic feedback and adaptive trigger resistance in the settings. 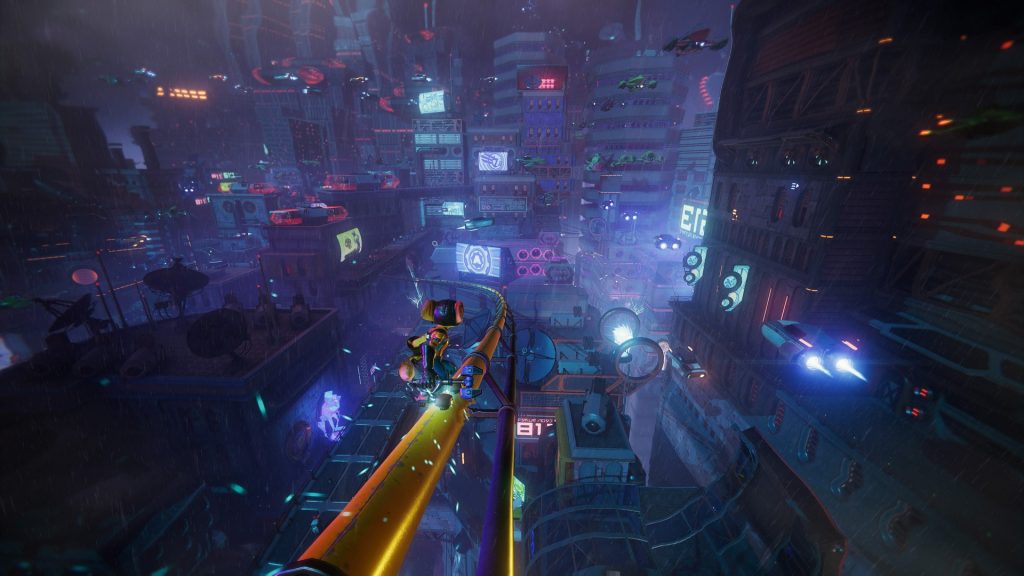 This is actually just one of the many settings that you can tweak in the game as Rift Apart has a ton of accessibility options. While you probably won’t finish a blind playthrough of the game anytime soon (like you can with The Last of Us 2), Rift Apart is still one of the better games to get for players with different needs.

Finally, Rift Apart also makes use of 3D Audio when using compatible headphones. The game’s implementation of 3D Audio is great, so much so that I recommend playing the game with headphones on. Given that the game is not exactly a challenge though, having 3D Audio wasn’t really a must-have for me in combat unlike with Returnal and Demon’s Souls, both of which are challenging games where I relied on 3D Audio to help locate enemies.

Simple, but a lot of Fun 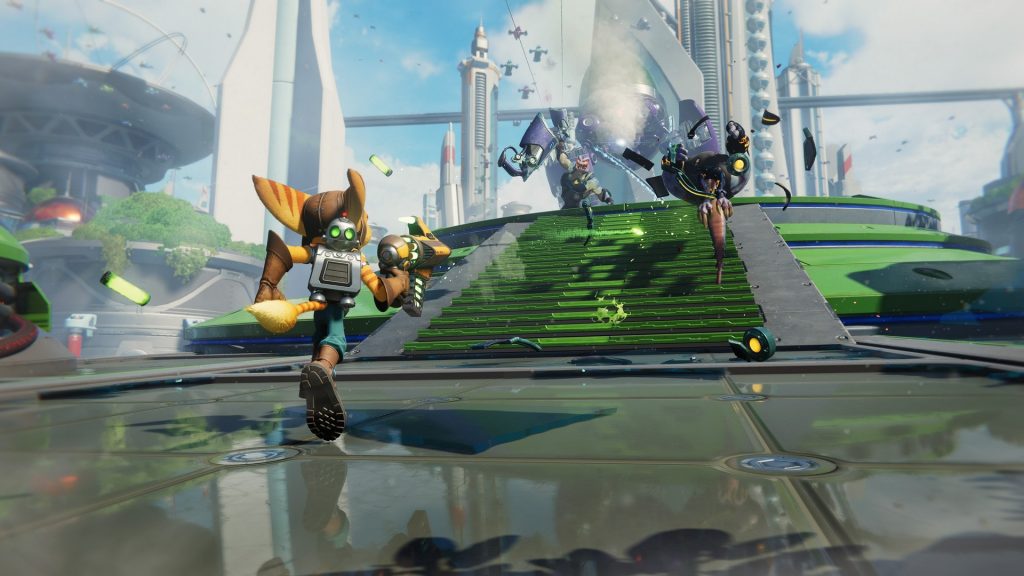 For gameplay, Rift Apart plays similarly to Ratchet & Clank 2016 in that players face off against a variety of enemies while equipped with a wide array of weapons. The core gameplay loop is pretty simple; just go through a level, defeat enemies, solve some puzzles, and beat the level’s boss. While this loop is straightforward, it’s a lot of fun thanks to the creative mix of weapons available.

While players start off with a basic pistol, their arsenal quickly increases to over a dozen unique weapons as the game progresses, all of which can be upgraded. From a more standard shotgun to a Topiary Sprinkler that turns enemies into plants, and even a gun that shoots drill bots at enemies, the various weapons in Rift Apart are unique and feel great to use. 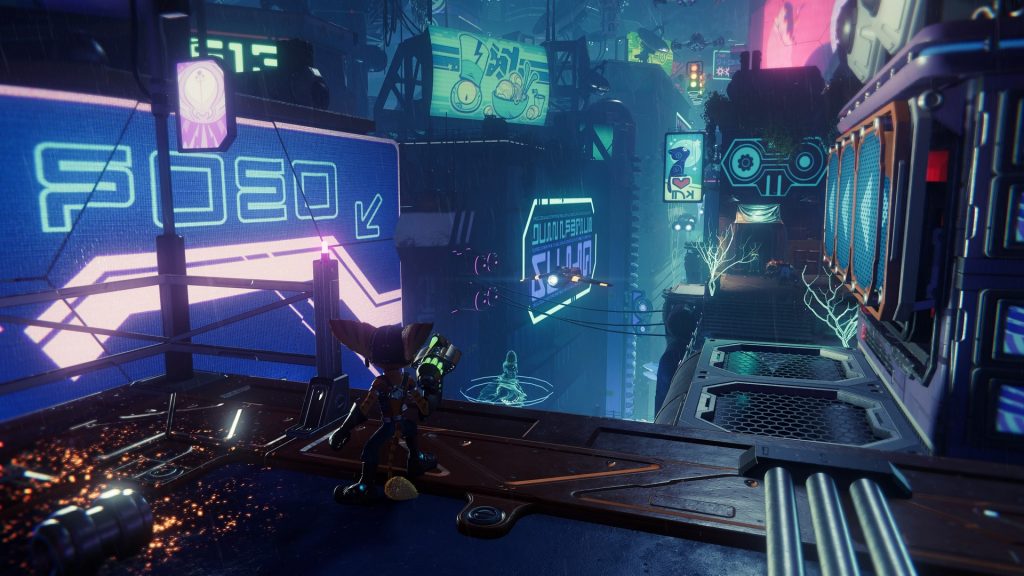 As you play, you’ll likely find yourself sticking to certain weapons that fit your playstyle, but you will have to switch to other weapons, especially when your ammo runs out and there are still enemies in the field. You’ll also have to switch weapons for certain enemies, as some guns are more effective against certain foes.

Speaking of enemies, there’s a good amount of mob variety in the game, though the same can’t be said for bosses. Every world (or level) in the game has a big boss fight, though a lot of these fights can feel samey, especially as some later bosses are mostly just reskins of a previous boss encounter. In this way, it’s kind of similar to the numerous Troll bosses in God of War 2018. It doesn’t help that Rift Apart is a fairly easy game (at least on the standard difficulty setting), meaning some later boss fights are rather forgettable given they don’t offer much resistance.

Even if the game is on the easy side and the core gameplay loop is simple, Rift Apart’s combat is still fun and engaging. It also helps that there are some side levels that offer a nice change of pace. These levels include some Clank puzzle-solving, as well as a cute combat hacking mini-game.

As for the game’s levels, Rift Apart’s level design isn’t a big departure from the previous Ratchet & Clank game. Most of the game’s worlds have fairly linear maps that aren’t the biggest in scope; except for one particular world with a larger area to explore. Each of the worlds also have various collectibles to complete which encourages exploration. While most worlds have unique traversal mechanics, I did find that the game having only 9 worlds to explore (not counting a certain level) makes the game feel a bit small, especially as the 2016 Ratchet & Clank game had 12 planets to visit. 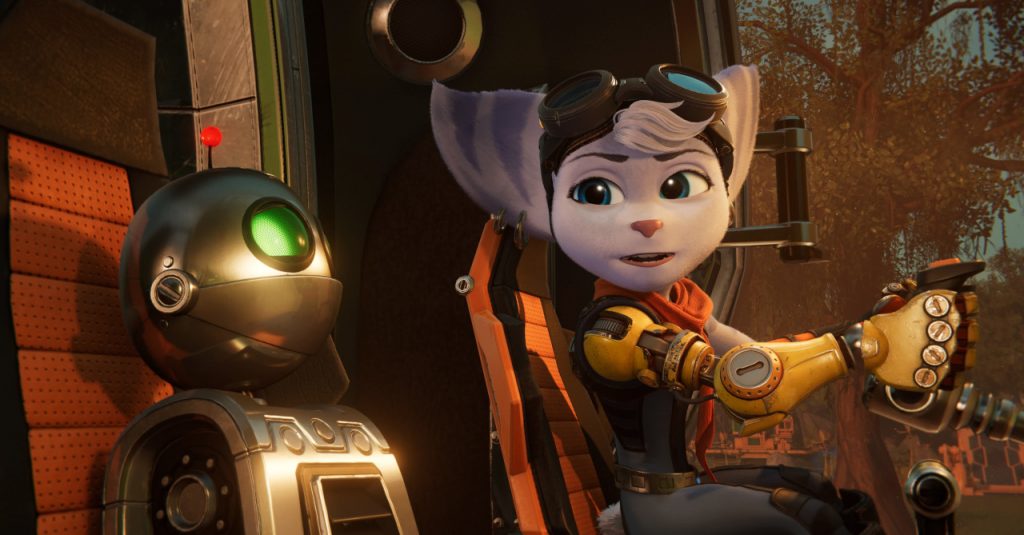 While it may not have as many planets as the 2016 game, Rift Apart does have the clear edge of the previous R&C game when it comes to story. The 2016 remake had a story that suffered from having to tie in to the Ratchet & Clank movie, making for a narrative that felt disjointed for most of my playthrough.

That is not the case in Rift Apart as the game’s story is solid and flows well. It also has a lot of heart, especially as the new characters introduced in the game are a loveable bunch. Of course, the highlight is Rivet, Ratchet’s dimensional counterpart who adds a fresh perspective, especially as you play as her for around half the game. Though aside from Rivet, there’s also a memorable new character that also stole several scenes for me, but I won’t spoil who that is just yet.

I have to admit though, I haven’t played all of the older Ratchet & Clank games, so I can’t fully tell if Rift Apart fully captures the spirit of the original games in terms of story. Still, I thought the story was an entertaining ride, even if it is a bit on the safe side; I didn’t detect much here in the way of innuendos. 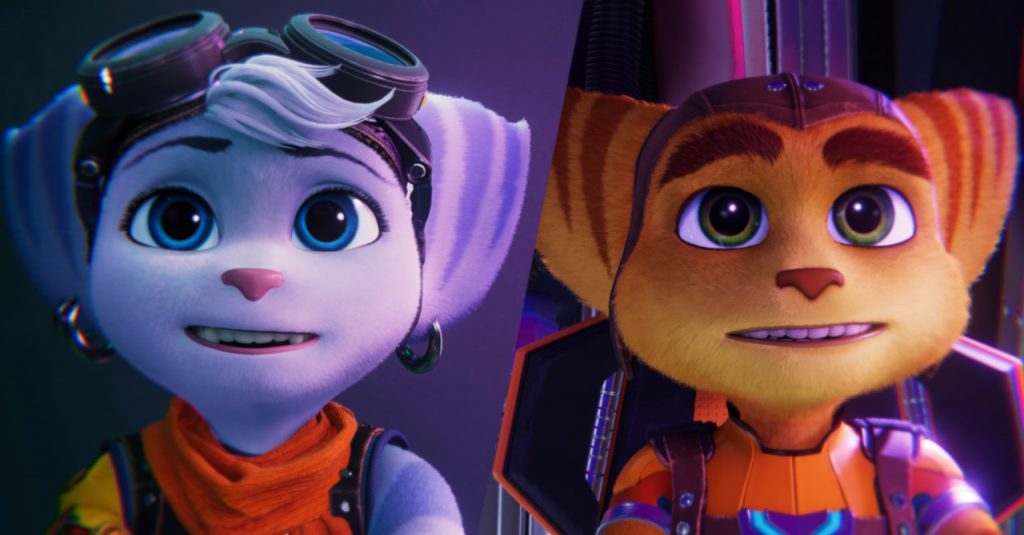 So, does Rift Apart prove that the Ratchet & Clank formula can still work today? Definitely! Insomniac Games did a terrific job in making a game that takes advantage of the PS5’s power, all while having engaging gameplay, as well as a lovely story filled with charming characters. Sure, the scope could’ve been bigger and it could’ve used more boss variety, but Rift Apart’s strengths, along with its sheer fun-factor, heavily outweigh these shortcomings.

Overall, Ratchet & Clank: Rift Apart greatly shows off the capabilities of the PS5, making it highly recommended for owners of the console. More than that though, Rift Apart shows that the 3D action formula of the Ratchet & Clank series still has a lot of life left in it.