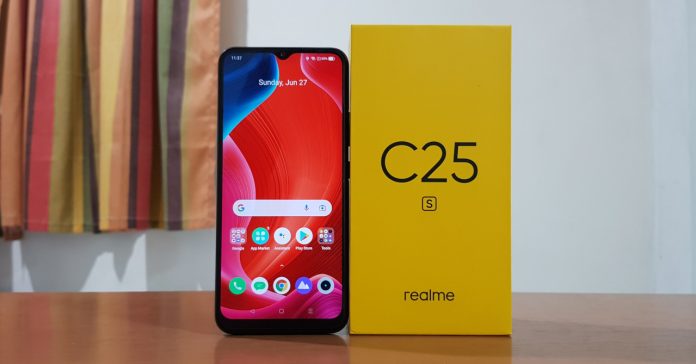 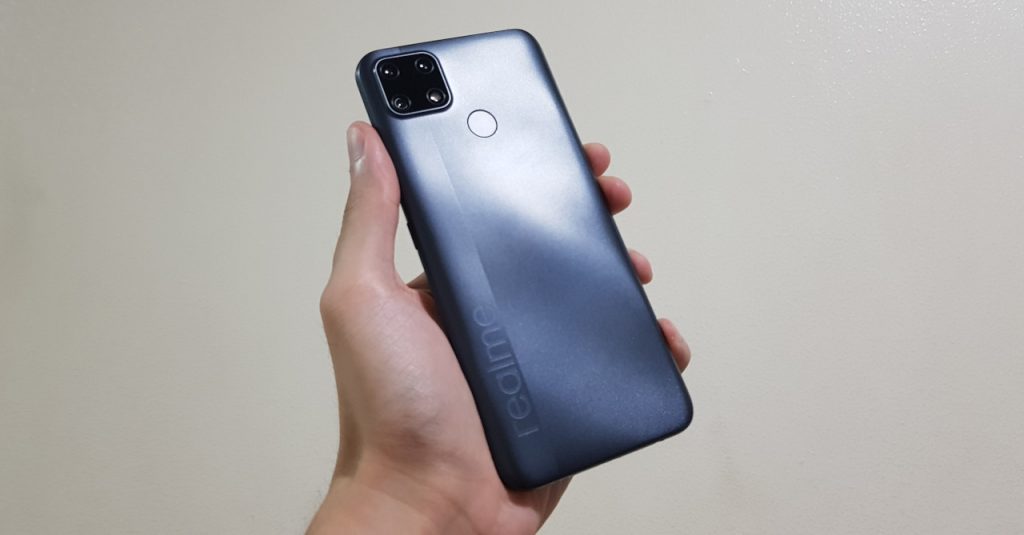 With a slight processor upgrade then, does the realme C25s prove to be worth getting over the C25? And is it still a good entry-level smartphone in its own right? Find out here in our full realme C25s review! 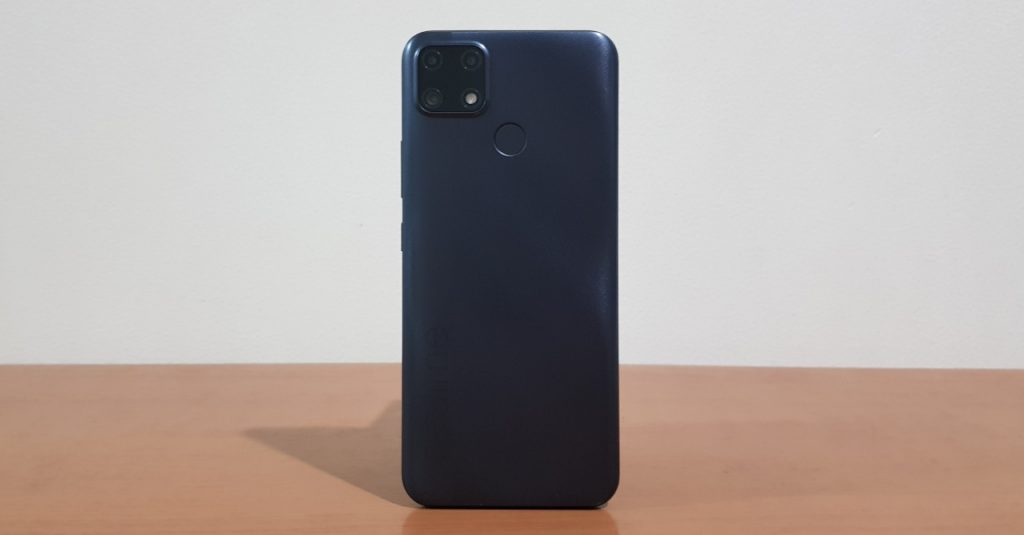 The internals of the C25s and the previous C25 are almost the same, but that’s not the only thing that the two phones share. Another thing that’s similar with both phones is design. The C25s looks pretty much the same as the C25, with both phones sharing a polycarbonate back with a two-tone finish, complete with a large realme logo at the bottom left corner (but not as big as the “DARE TO LEAP” logo in the realme 8 Pro). 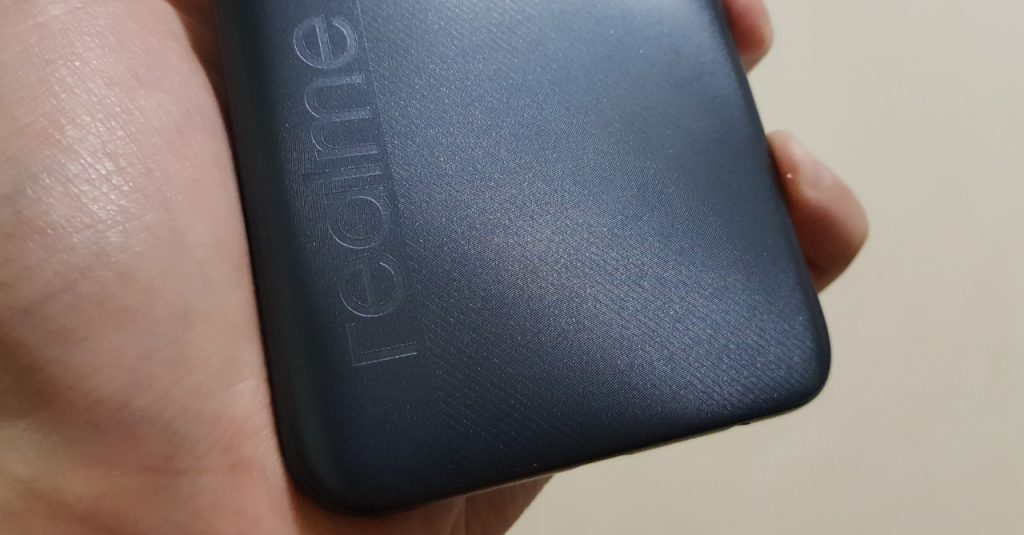 While a polycarbonate back is not exactly the most eye-catching compared to glossy-backed phones, the realme C25s is still a good-looking phone for me as the textured finish looks quite nice. Plus, the C25s’ matte back also makes it feel grippy to use, meaning this likely won’t slip out of your hand while in use. 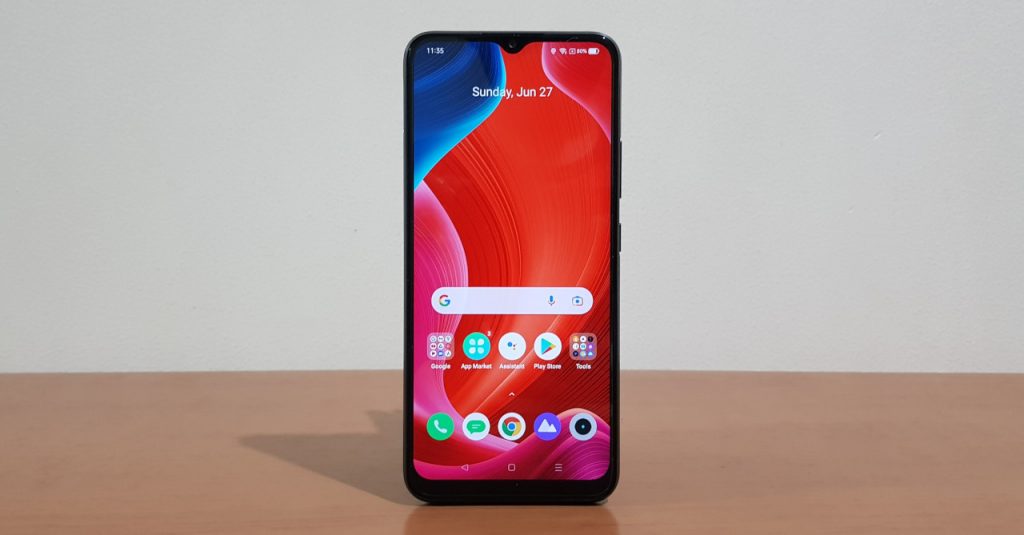 Moving to the front, we have the phone’s 6.5-inch display with a waterdrop notch. The phone’s display also has slim side and top bezels, though it has a bit of a chin at the bottom. Still, the phone looks like a modern Android smartphone from the front, and it should satisfy most users. 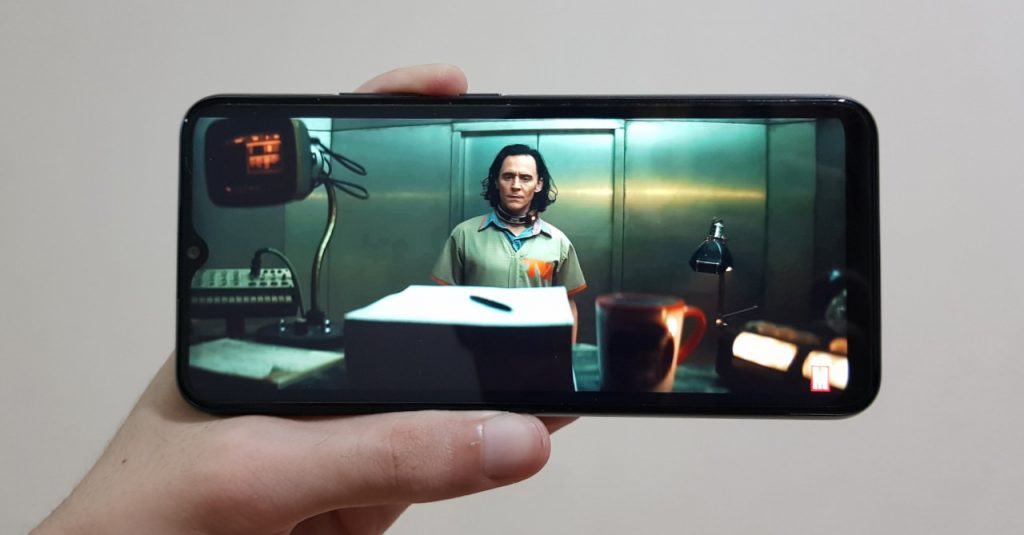 Speaking of display, the C25s has 6.5-inch IPS LCD screen with an HD+ (720p) resolution. A 720p resolution isn’t exactly the sharpest display out there, but it’s still quite nice overall for binge-watching movies and shows. The C25s’ display gets rather bright, and it has decent color output as well. Coupled with the fact that a 6.5-inch screen is fairly big, the C25s should satisfy for users on a budget who still want a device that they can watch on.

Audio-wise, the C25s packs a mono, bottom-firing speaker. As with most budget phones, the realme C25s’ single speaker is decent enough for some light video watching. But for extended binge-watching sessions and music-listening, you’ll be better off with speakers or headphones as the speaker can sound a bit tinny and harsh at near max volume.

As mentioned above, the realme C25s is powered by a MediaTek Helio G85 processor which is a slight upgrade over the C25. Though when it comes to actual use like for gaming, the C25s and the C25 perform at a similar level.

For less hardware-intensive games, the C25s performs well. Take for instance League of Legends: Wild Rift; the realme C25s is able to run the game at the High graphics setting and at 60FPS, and it holds at 60 for the most part. This means for MOBAs and other popular games today, the C25s is a good phone.

Meanwhile, here are the benchmark scores of the C25s on Geekbench and 3DMark Wild Life:

The C25s’ benchmark scores are a bit higher than the C25, meaning it does have the performance advantage, even if it’s not as apparent in actual gaming. In the long run, this bodes well for the C25s as it is likely to perform well even as the months (or even years) go by.

In the camera department, the C25s packs a 48MP f/1.8 wide + 2MP f/2.4 macro + 2MP f/2.4 depth sensor triple rear shooter setup, along with an 8MP front camera. Similar to the C25, the C25s doesn’t have a dedicated ultra-wide shooter, but aside from this exclusion, the C25s’ camera setup is about what you’d expect for a budget smartphone.

So how does the C25s’ cameras perform? Pretty good for the most part. 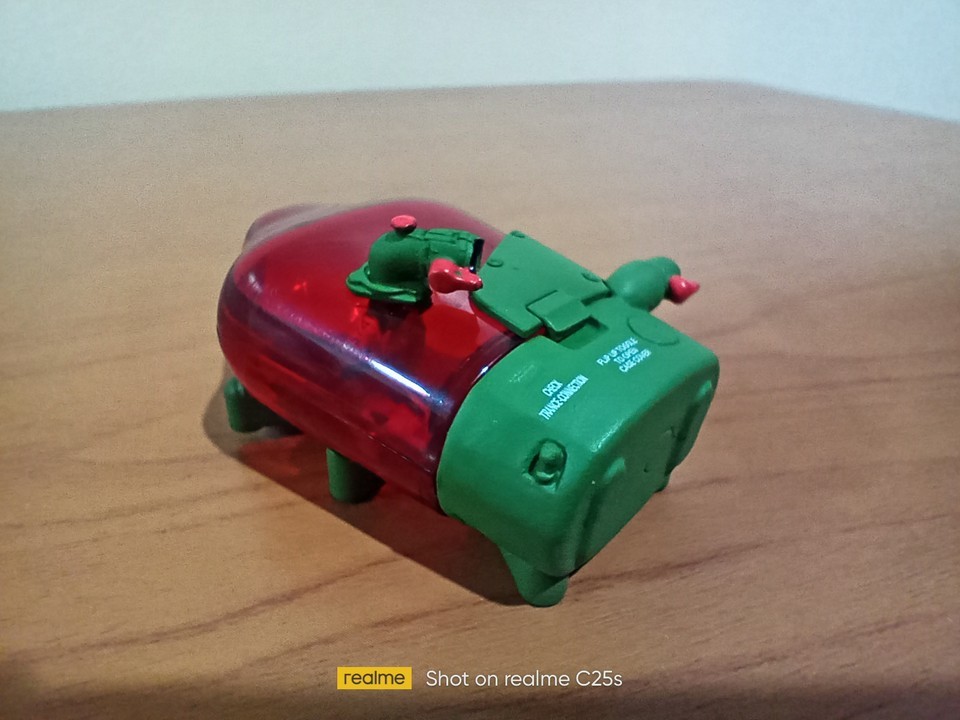 Moving on to the 2MP macro camera, this shooter performs similarly to most macro cameras found in budget to mid-range phones. This means macro shots are decent, but you’ll need a lot of light to get good quality images.

The phone’s 2MP depth sensor also lets the phone capture portrait photos with an okay background blur effect. Finally, selfies are of good quality for the most part, just remember to turn off or lessen the AI beautification as it can be a bit too much on the default setting. 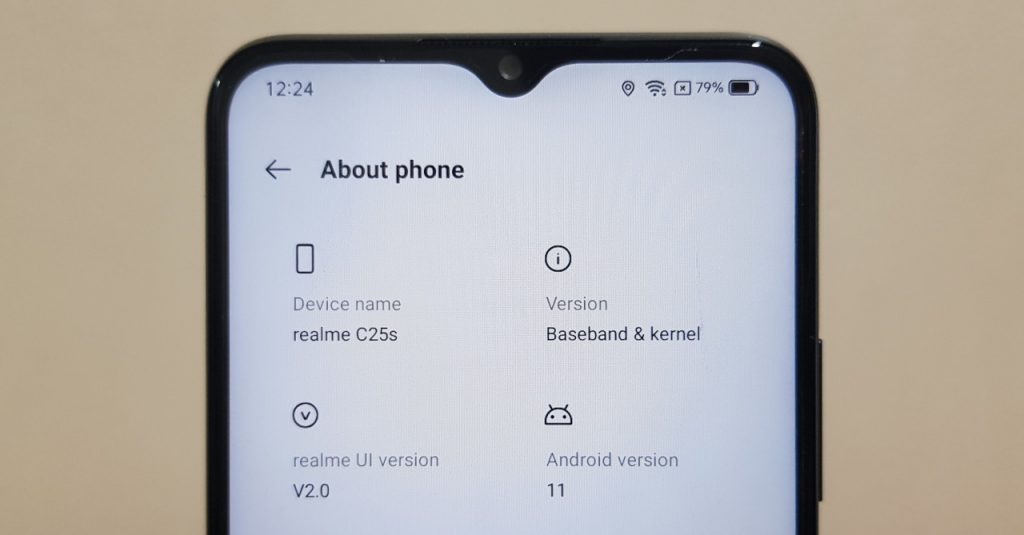 The C25s’ performance for gaming is good, so it’s no surprise that the phone also runs well for everyday use. For most use cases, the realme C25s should perform fast and snappily, even when switching between apps. Though you may want to limit the number of apps open in the background given that it only has 4GB of RAM.

As for OS, the realme C25s runs on realme UI 2.0 that’s based on Android 11. For the most part, this OS has various nifty features, including a system wide dark mode and more. The only real flaw of the OS is that there’s a lot of pre-installed apps (which also have lots of notifications). Thankfully, these apps don’t really make the phone slow.

As for battery life, the C25s is a winner thanks to its massive 6,000mAh battery. With its large battery, the phone can last for up to two days on a single charge. While you can drain it faster if you game for hours on end, the C25s should still have enough juice to last for a day. If you do need to charge, the C25s has 18W fast charge support for faster charging. 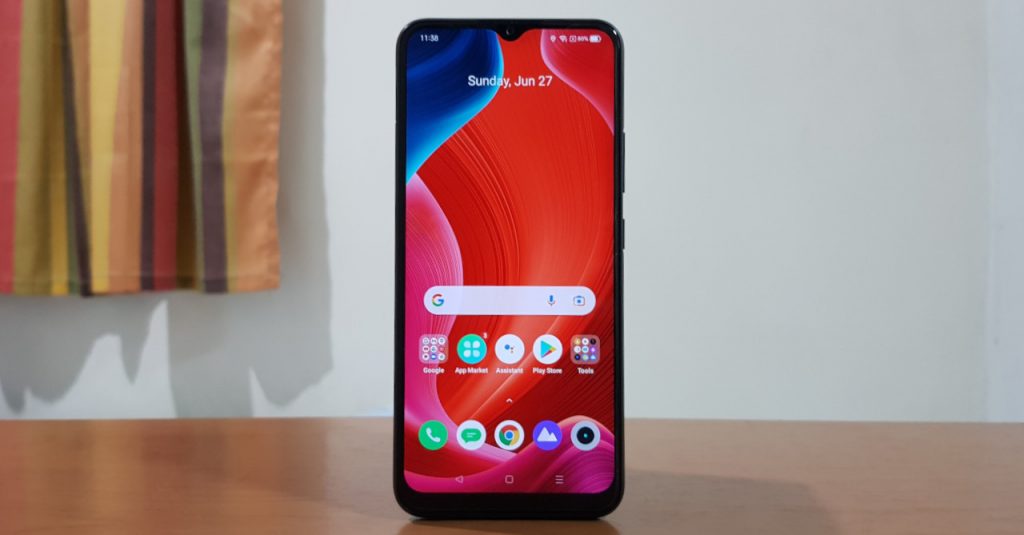 With a price of PHP 7,490 for the 64GB storage version, the realme C25s has the same SRP as the realme C25. Because of this, the C25s proves to be another good entry-level smartphone from realme. Aside from sharing the same massive battery and capable main camera with the C25, the C25s also packs a slightly more powerful processor which can mean that it’ll perform faster over a longer period of time.

Overall then, the C25s is a smartphone that’s well worth considering for buyers on the lookout for a budget device for their work/study from home needs.