Obsidian Entertainment has done a great job with the second Outer Worlds expansion. 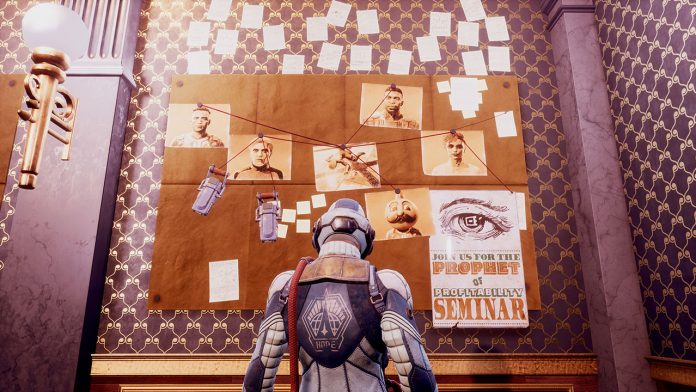 The Outer Worlds developer Obsidian Entertainment finally released the second DLC expansion of its award-winning first-person RPG last March. Dubbed the Murder on Eridanos, the expansion comes only half a year after the release of last year’s Peril on Gorgon. While the wait was significantly shorter this time around, there’s also a bit less content for players to experience compared to the first expansion.

A World of Its Own

Much like Peril on Gorgon, Murder on Eridanos is separate and independent from the rest of the game, although it still requires players to go through the base game up to a certain point. And this expansion takes that even further by keeping the entirety of its story within the titular gas giant, or more accurately at the Eridanos Atmospheric Complex that is set atop a cluster of islands floating within the planet’s atmosphere. 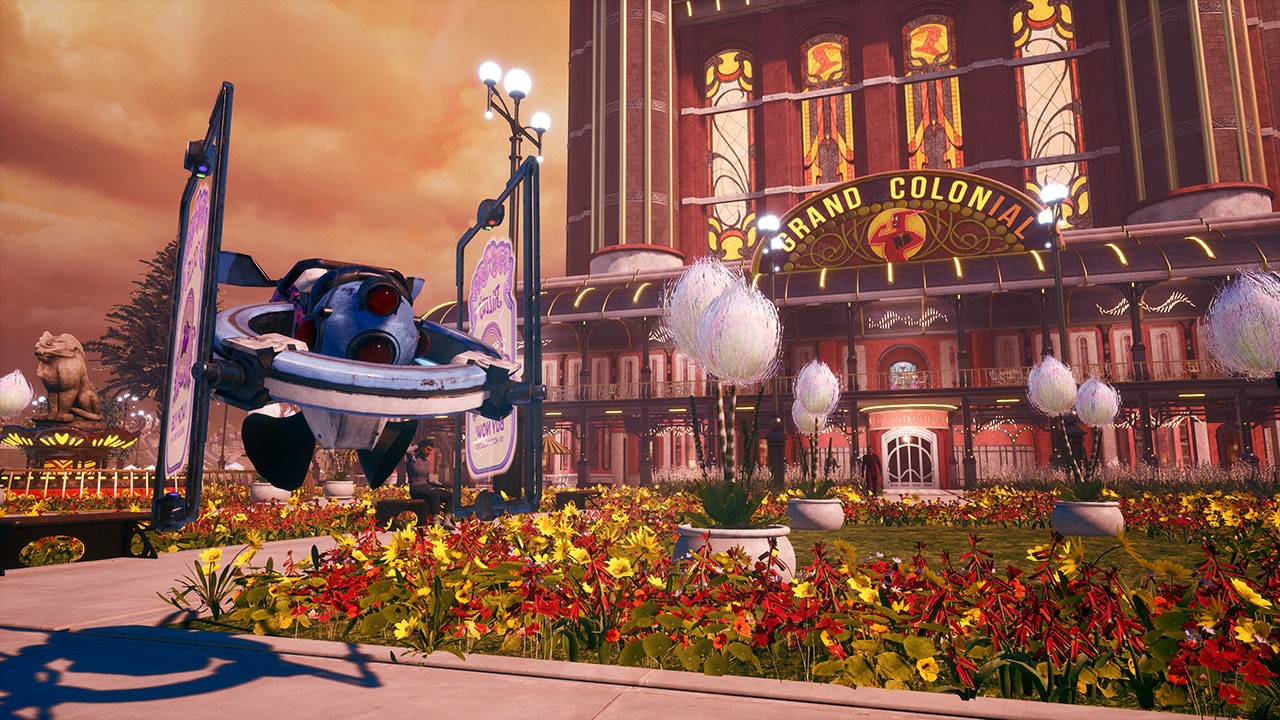 There are both advantages and disadvantages to this approach. On the one hand, keeping its experience enclosed into a single location helps keep the story more intimate to a sense and help maintain its immersion. On the other hand, it further disconnects the expansion from the rest of the universe which makes its events feel inconsequential to the greater scheme of things in comparison to the base game’s story, which was also the case with Peril on Gorgon.

However, the different areas that comprise the Eridanos Atmospheric Complex, which include the Grand Colonial Hotel, a distillery, a humongous orchard, and a wildlife reserve, to name a few, are all individually distinct enough to keep the experience of exploring the colony from becoming stale. Eridanos stands in stark contrast to Gorgon with its bright and colorful locations along with its lively and varied populace. 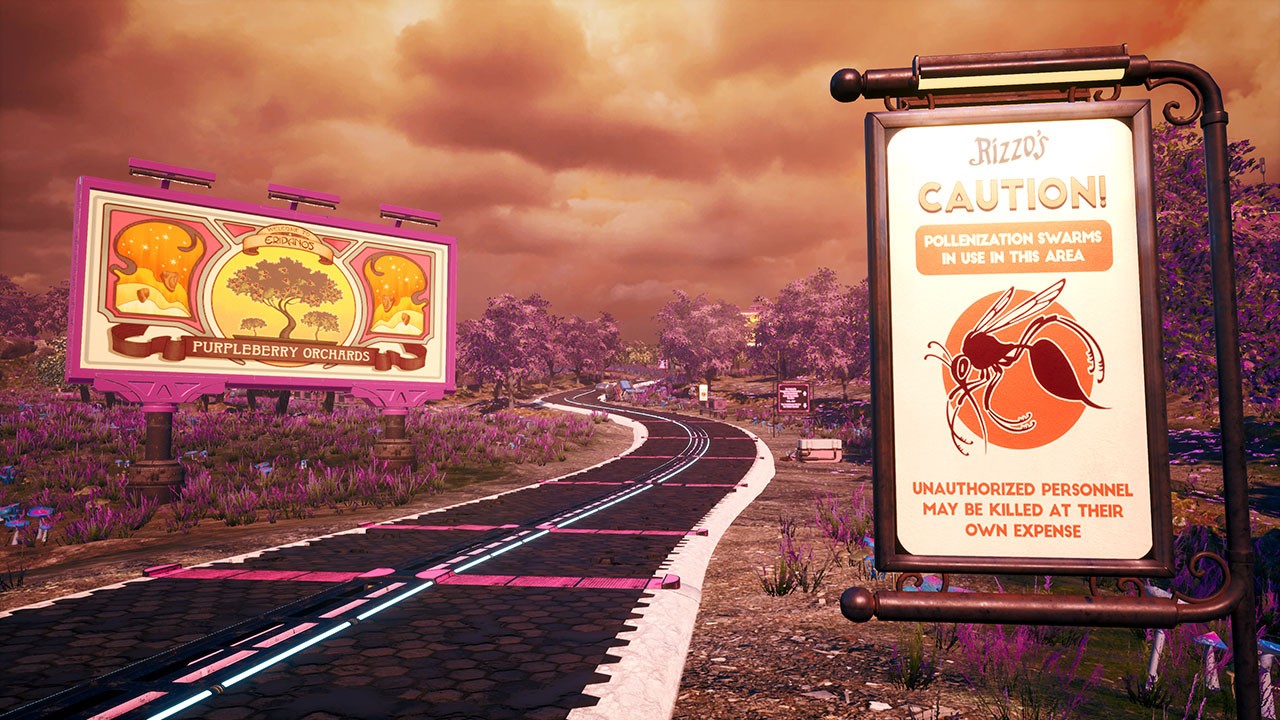 The strength of its premise does help Murder on Eridanos stand on its own and within its own narrative and geographical bubble. In it, players are tasked to solve the sudden and mysterious murder of popular aetherwave actress Halycon Helen. While on the onset, the game’s plot is a simple case of whodunit, Murder on Eridanos is impressively able to present its premise in clever ways that keep it mostly unpredictable.

The excellent writing of The Outer Worlds is also showcased much more in this expansion than it was Peril on Gorgon because while players were left to experience most of the first expansion’s writing through phonographs as well as messages and logs left by the ruined asteroid’s former inhabitants, Murder of Eridanos features a much larger and significantly more present cast of characters. 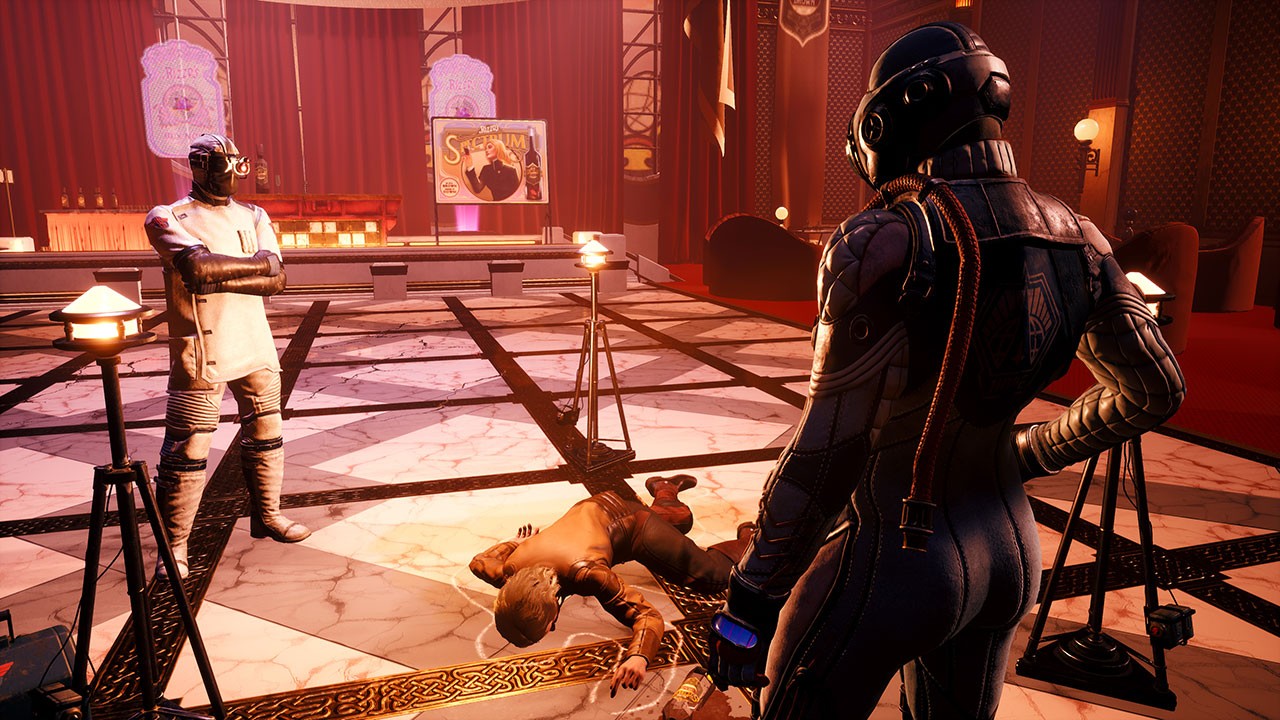 As players explore the Eridanos Atmospheric Complex to solve the murder of Halycon Helen, they begin meeting each of the suspects that needs to be questioned and investigated, with each one presenting their own potential stories and motivations as to why they would potentially be guilty of the crime. As previously mentioned, the game does a pretty impressive job at keeping the latter part of the story ambiguous until things truly unfold.

This is especially helped by the ongoing power struggle within the Eridanos Atmospheric Complex, which is presented to players almost instantly at the start of the expansion, that adds another layer to the mystery surrounding Helen’s murder. The central narrative alongside the intertwining stories of those directly and indirectly involved all work to create an intriguing and engaging experience. 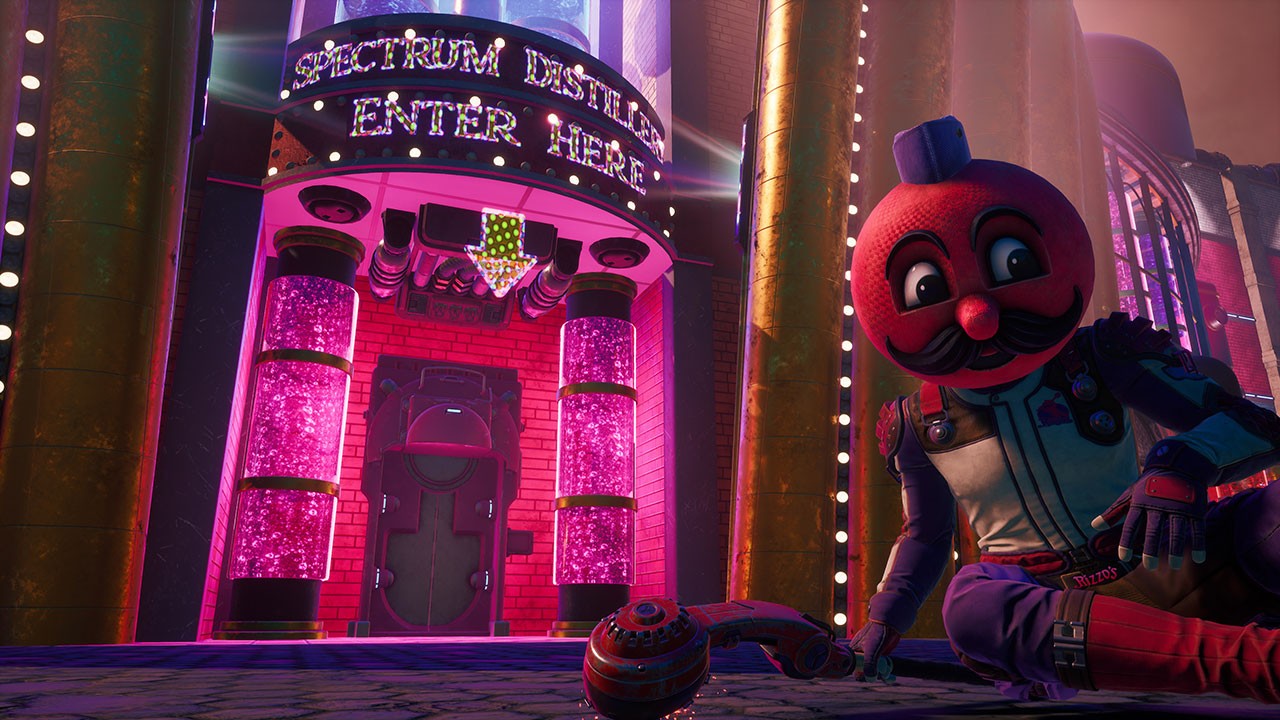 Come to Your Own Conclusions

Like Peril on Gorgon, Murder on Eridanos features its own array of narrative twists and while the former offered a more linear unraveling of its story through discovery, the latter presents players with several leads that help them gather evidence on each of the suspects and come to a conclusion as to who may be the culprit. The process is a pretty entertaining way to present and maintain its murder mystery theme and progress its story at the same time.

Additionally, having to actually talk to the expansion’s characters as players try to find clues to solve its msytery also helps lead to a much longer main story, with Murder on Eridanos clocking in at a few more hours than its predecessor. 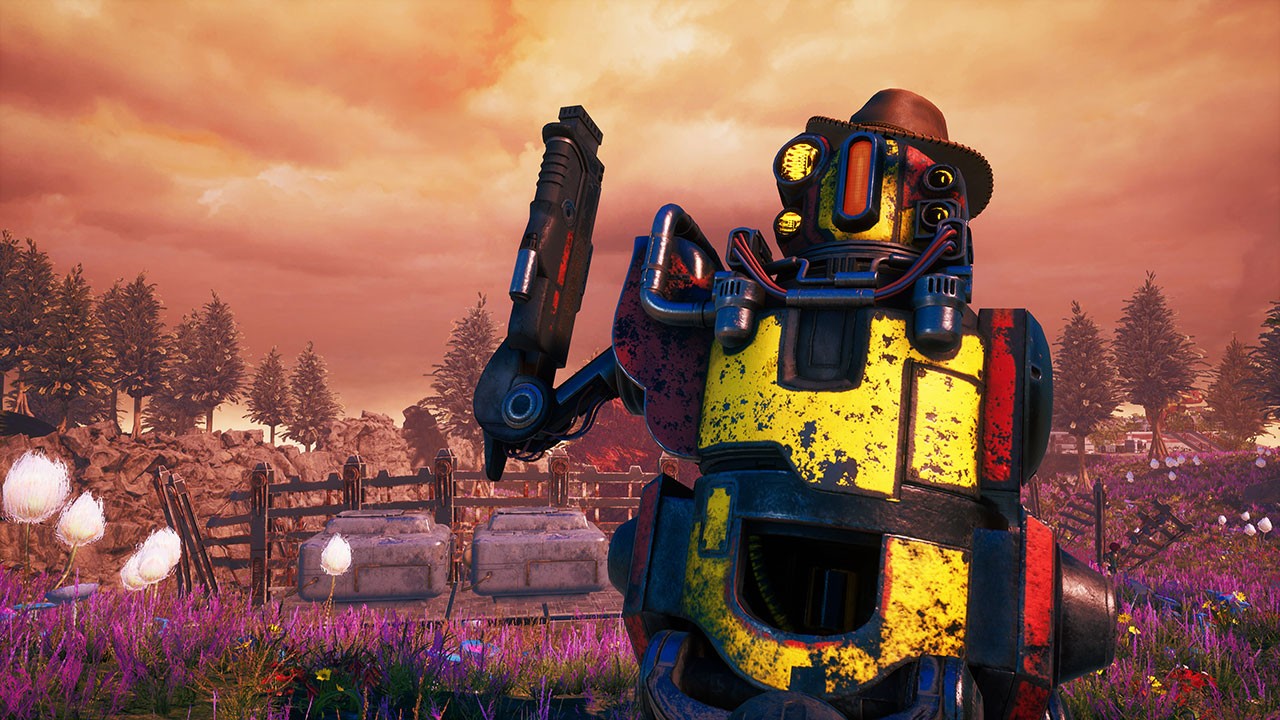 Not Everything Is as It Seems

Unfortunately, the game’s side quests aren’t as well-thought-out as its main story. Despite featuring significantly more than Peril on Gorgon, many of them are short, mundane, and feel a lot like filler content. While some of the side quests do feature interesting little stories that help enrich the world of Eridanos, they are few and far between. Cutting out a few of the filler quests to further strengthen the rest would have been much more appreciated.

Murder on Eridanos also introduces less new gameplay features than Peril on Gorgon, with no new skills or perks as well as fewer new weapons and armor overall. The expansion does introduce a new and interesting tool that players will regularly use to progress its story. Dubbed the Discrepancy Amplifier, the new tool helps players discover clues, follow tracks, and more, while featuring its own set of humorous voicelines. 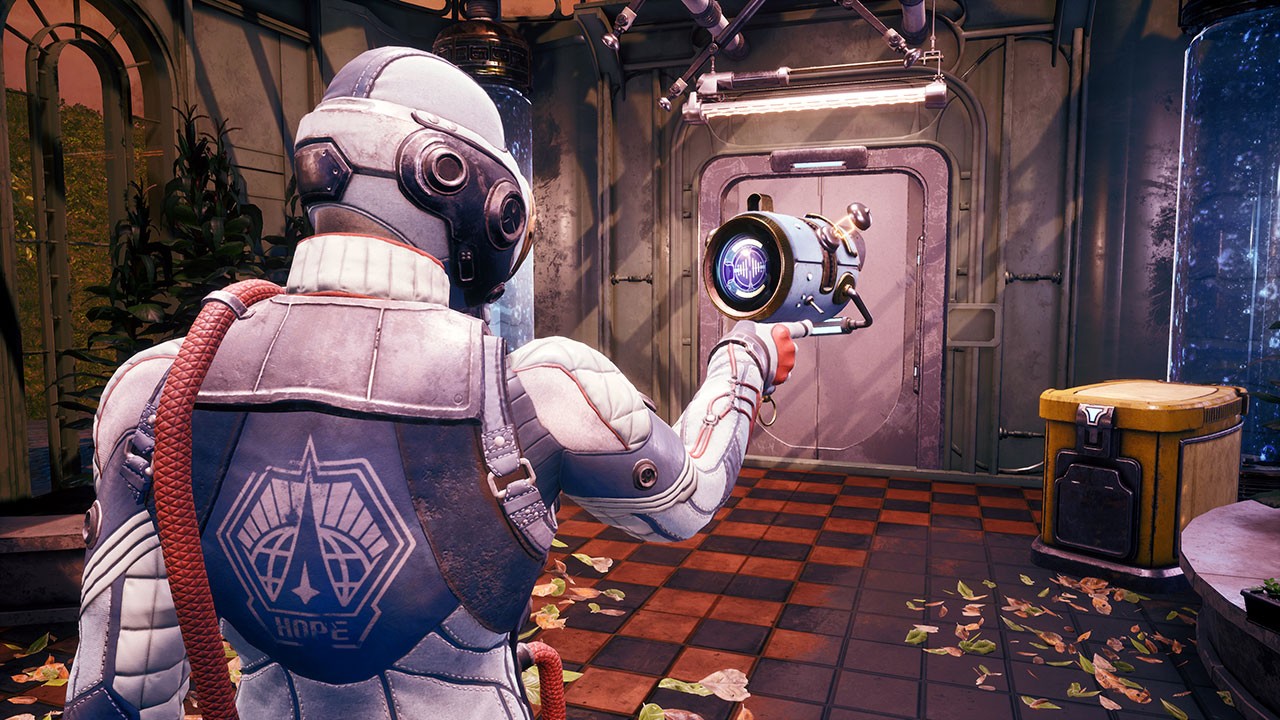 The rest of the gameplay is pretty much the same as always, although the combat does get a bit monotonous in the latter portions of the expansion as the variety of enemies decrease and you begin fighting more of just the same types of enemies. Nonetheless, the primary strength of The Outer Worlds has always been in its excellent and engaging narrative and presentation, and Murder of Eridanos executes on both accounts excellently.

Obsidian Entertainment has done a great job with its follow up to Peril on Gorgon and while Murder on Eridanos does feature some of the same weaknesses as its predecessor, such as its lack of substantial sidequests and general length, along with fewer new gameplay features, it’s able to execute most of what it introduces pretty well. It’s engaging narrative, quirky presentation, and excellent writing are all able to lift the expansion above its predecessor in a number of ways and, just like it, is able to leave players wanting more.

Previous articleXiaomi announces Redmi Note 10 5G price and availability in the Philippines
Next articlePS5 3D Audio: Which Headphones are Compatible

The Outer Worlds: Murder on Eridanos Review (PC) | An Intriguing Mystery ShowcaseMurder on Eridanos stands in stark contrast and improves on its predecessor in many ways. While it does fall short in some of the same aspects, it’s able to present a livelier and brighter setting along with an engaging narrative and excellent writing to offer players a fun albeit brief murder mystery experience.