Scarlet Nexus Review | Set your Brain Power to the Max 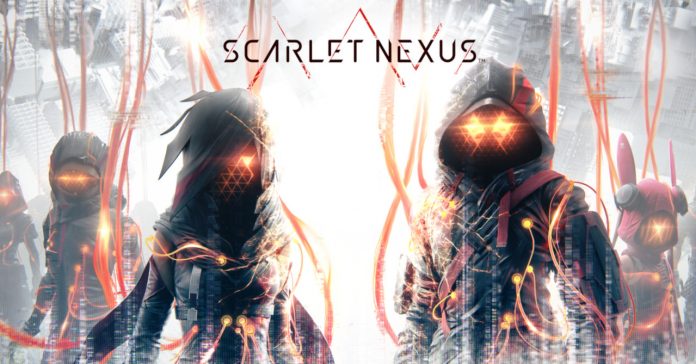 I like Anime-styled video games, particularly Code Vein and the God Eater series with their fast-paced gameplay and how Anime those games are (rubbing the inner basement dweller within me just right). Playing them just makes me ask for more Anime-styled video games rather than games based on Anime since they tend to disappoint personally. But thankfully, Bandai Namco doesn’t seem to run out of ideas or stop making games from this style, so I was so excited when they revealed their latest entry, Scarlet Nexus.

There’s so much hype with this new title that they spared no expense in promoting this new game; they even produced a Scarlet Nexus anime based on the game that aired during the game’s release. But with all that hype, this begs the question; is Scarlet Nexus even good? 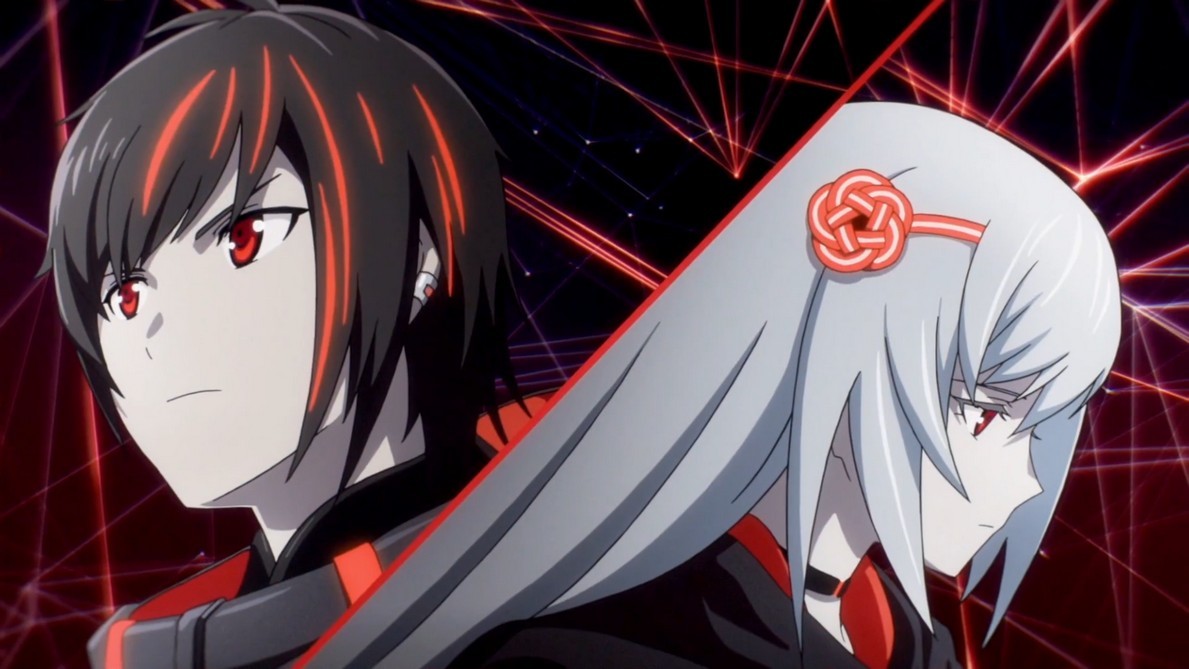 If this review were a drinking game, the word that you’ll be looking for is “Anime” because Scarlet Nexus doesn’t only look like an Anime, but it also takes many tropes from this medium. We got generic anime characters like your typical protagonist Yuito, his straight-laced counterpart Kasane, childhood friend Hanabi, Ara Ara Kyoka, and the boys. So, there is a whole cast of side characters ready to lend their support to your current character. What makes it even better despite having this many characters is that they don’t feel out of place; each is somehow always involved in the current stage of the story. 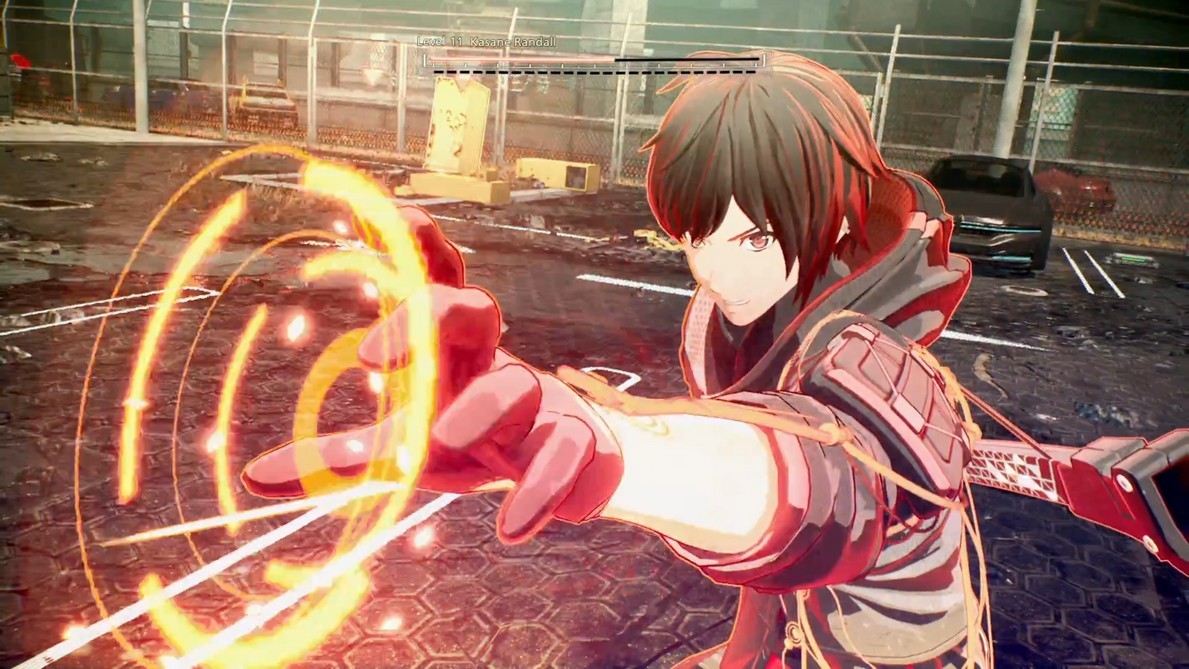 Scarlet Nexus does not only look good, but it also sounds good from its vibin BGM that I can’t stop listening to. Meanwhile, its voice acting (which you can switch between English or Japanese voices) is excellent in both dubs. Although both voice casts have done an awesome job for the characters, I went with the Japanese dub as I wanted to hear more Horie Yui in my life, and you can only gear Kyoka’s Aras in Japanese. 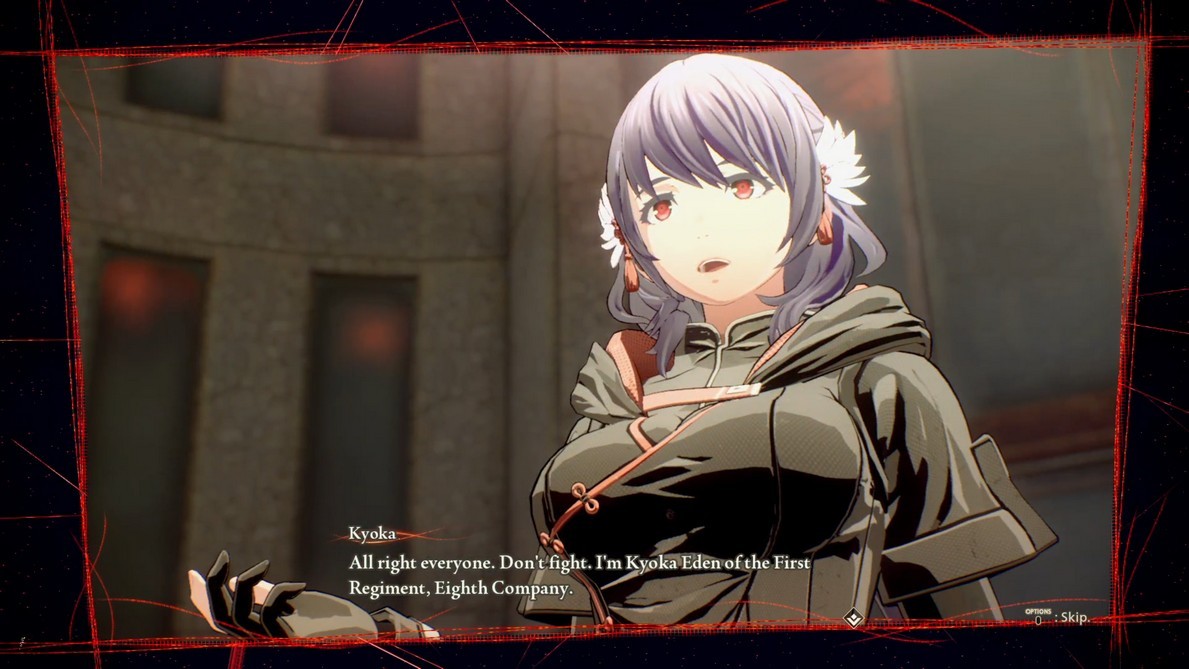 The only letdown visually for me is despite having an interesting enemy and character design, I can’t say much about the stage design. The overall stage design lacks luster as every stage feels just the same. Each stage is either just a deserted shopping district or a collapsed road, and all are designed to be a straight path to your current objective. As if the game encourages you not to loiter around but instead go straight at the story. This kind of stage design is good and bad at the same time in some way, but I’ll explain further later.

Link together with all 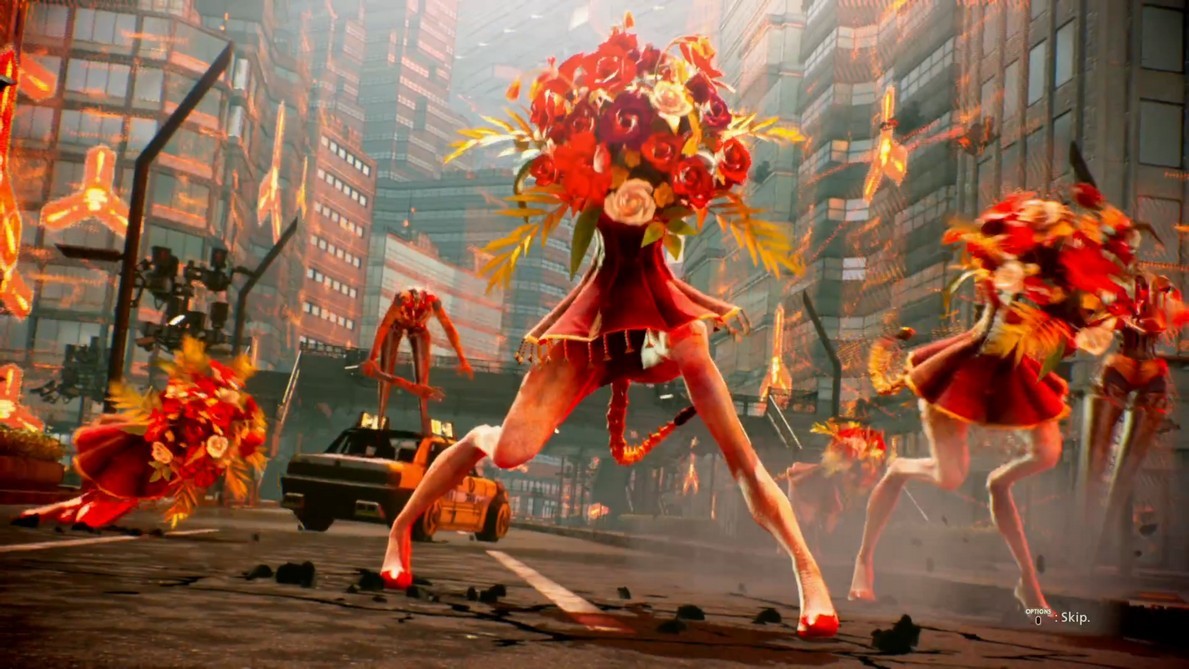 Scarlet Nexus’ story is set in an alternate future where humanity struggles against the beings called the OTHERS, strange beings that eats human brains. To counter these threats, humanity formed the OSF (Other Suppression Forces). This organization recruits humans who developed psychic powers, and they amass soldiers by either scouting these said humans or either volunteer who enlist for their cause, which is the case for one of the protagonists Sumeragi Yuito who wields psychokinesis. His motivation for joining the OSF is not only to save people, but also to thank the girl who saved his life when he was young. His encounter with fellow rookie Kasane Randall makes him wonder if she has any relation with the girl who saved him since Kasane bears a strong resemblance to that mystery girl. 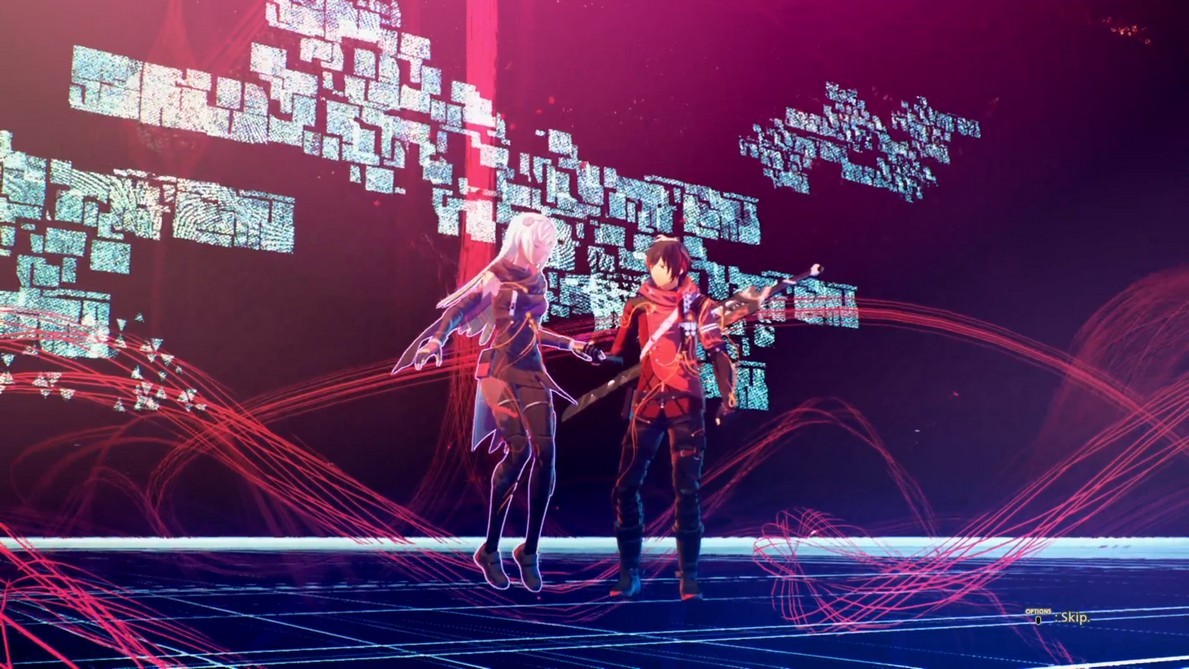 The story is told with some well-animated cutscenes and most of the dialogue is delivered through a visual novel style presentation. Their choice of presentation is stylish, and you can have some fun with the right analog stick during the visual novel sequence, but it gets me dizzy whenever the narrative transitions from the next scene during these sequences as the camera pans over the next slide. Although I did get used to it after a while, it’s just a bit too distracting in my opinion. 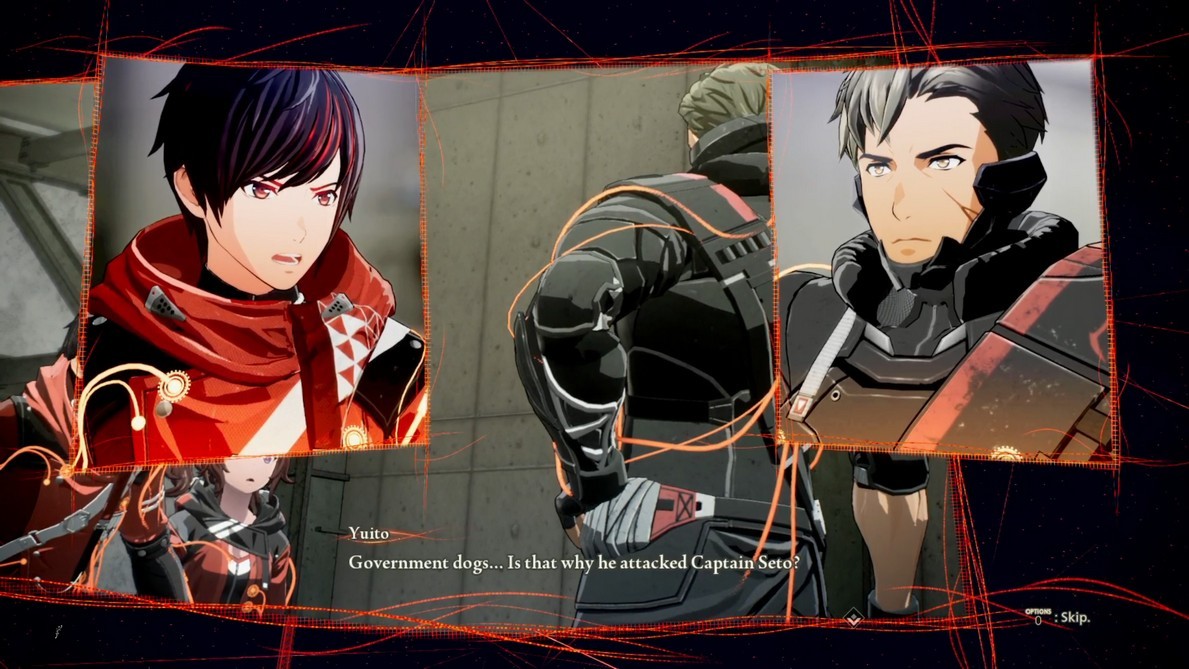 Regardless, the game’s story is worth going through and it’s not fair to just write it down as a generic Anime story. But to help you get a better grasp of what I’m trying to say, Scarlet Nexus’ story has the same vibe as the first God Eater but not entirely. Both have this organization that defends humankind against man-eating monsters, recruiting young people to this cause, all while having the same conspiracy on the said organization. But despite these similarities, Scarlet Nexus’ overarching story between the two playable protagonists gives you much perspective to the story as a whole. So playing both characters is a must to fully enjoy the game. Though what makes Scarlet Nexus stand out more is how it handled its supporting cast.

Friendship is the only ship that will sail here 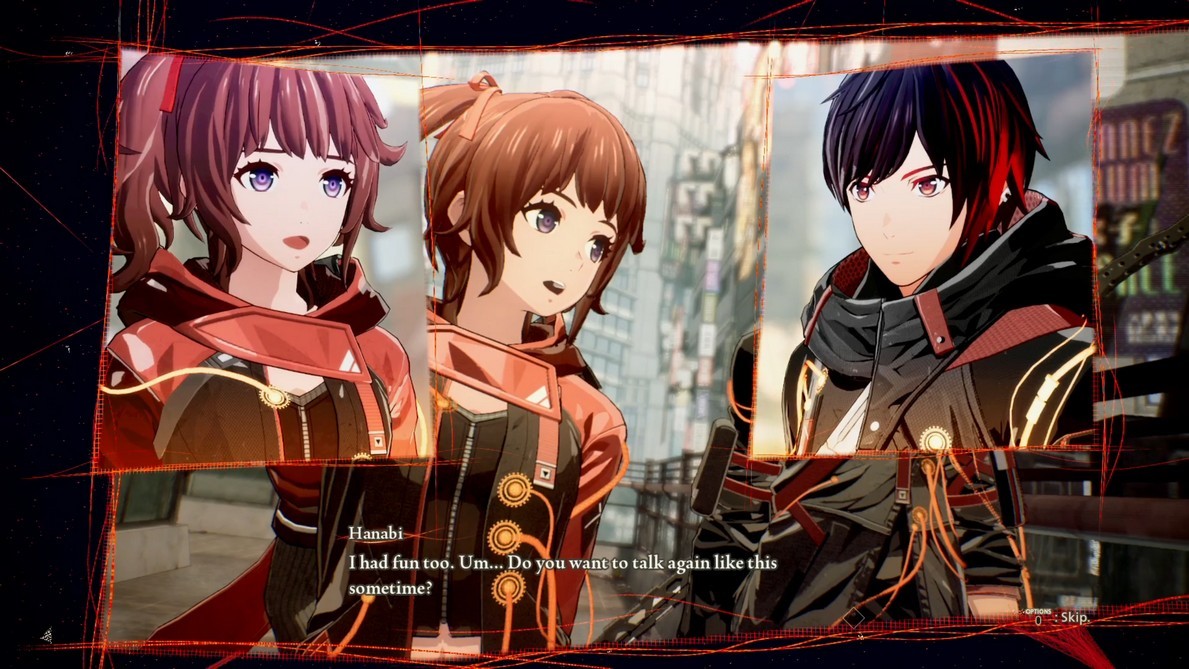 Each supporting character can have their own arcs during breaks or “stand-by-phase”, giving you time to bond and learn more about that character. Usually, these bonding times are all related to the previous part of the story, making it clear how they feel about the current situation and how they grow through it. Another thing worth mentioning is after bonding with these characters, it will increase your relationship with them which improves their powers and strong bond with others, and it is one of the themes of Scarlet Nexus. The further your bond with other characters, the stronger the team as a whole gets. 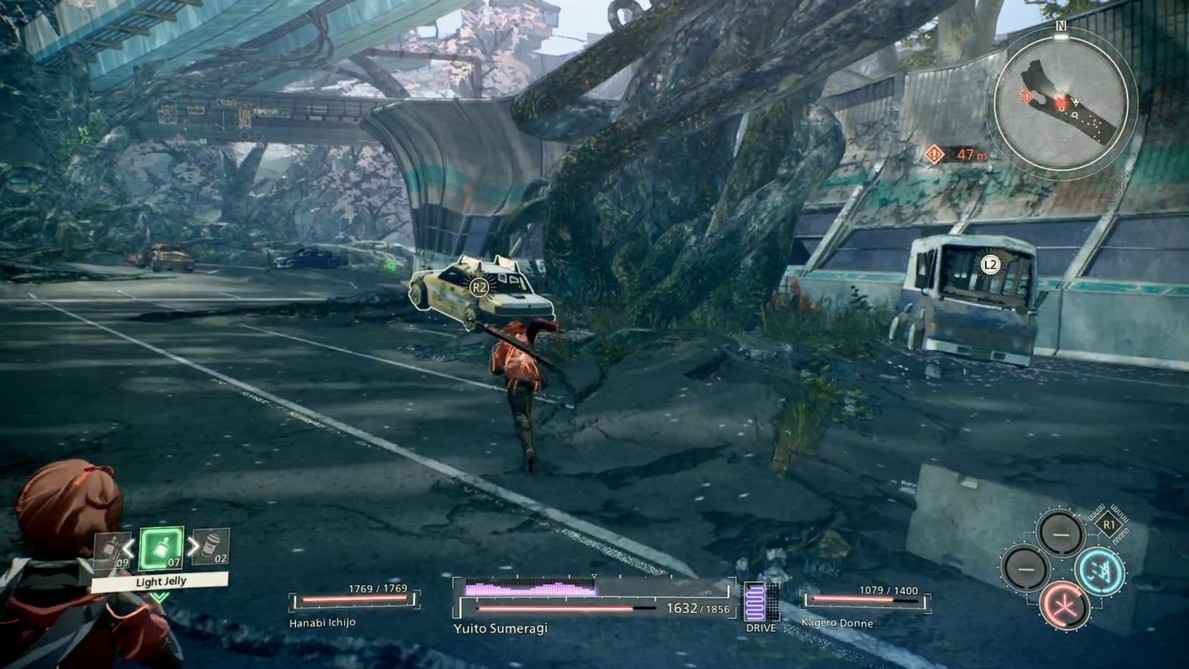 To further explain why the game’s stage design is good and bad at the same time, Scarlet Nexus puts a heavy emphasis on its story. Simply put, it wants you to go straight from chapter to chapter so there is no real idle exploration or talk within the world, instead you’re left with a few voice lines while exploring an otherwise empty lot. This goes the same with the side quests as most of these quests can be a bit uninteresting and easy to accomplish, making me think that they’re more of a chore rather than extra content. Although, the good thing is you can get straight ahead to the main plot and some bonding time which is one of the strongest points of Scarlet Nexus. It just doesn’t want you to stop moving the story. Though progressing the story will let you get stronger, which is great as the game’s combat is superb. 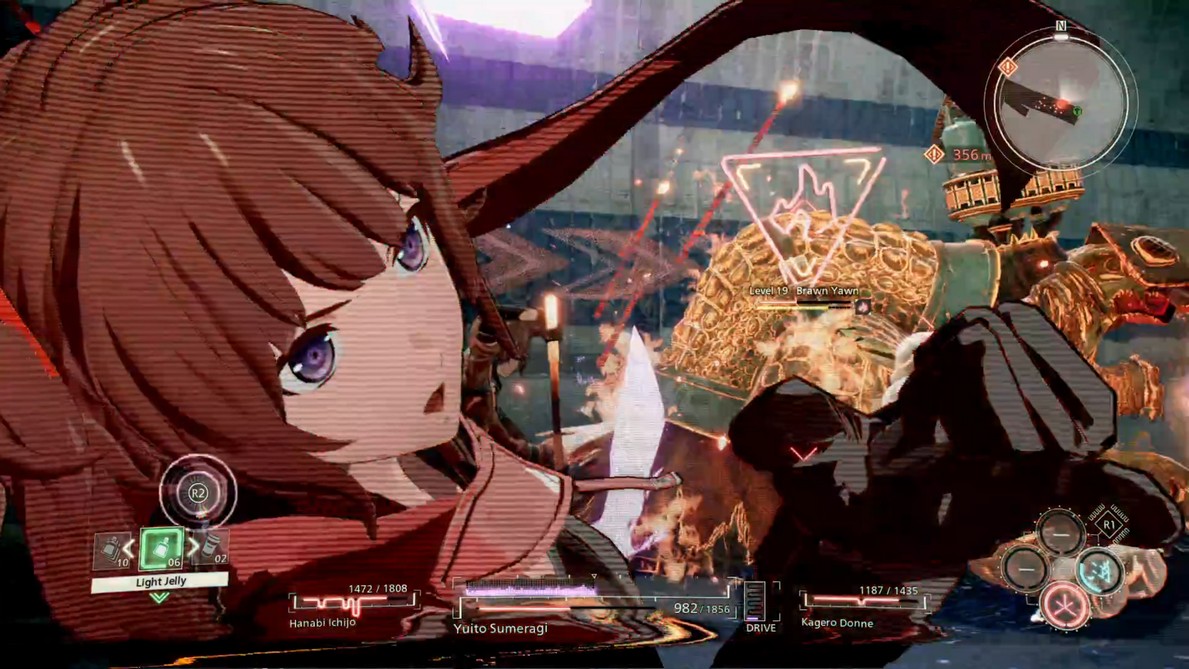 Scarlet Nexus at its core is an Action-RPG with fast-paced combat mixed with a level-up system where you spend points on building your character. The combat itself is a mix of swordplay and psychic powers, with both Yuito and Kasane being able to wield psychokinesis, but they play differently. Yuito uses his Katana for close combat, while Kasane uses her knives to unleash mid-range attacks covering quite a radius. The combat is quite complex with its weapon combo system where at any point when you hurl debris at an enemy, you can follow up that attack with the right timing. Bigger attacks can also be triggered by the interactable objects within each stage, devastating huge numbers of enemies. 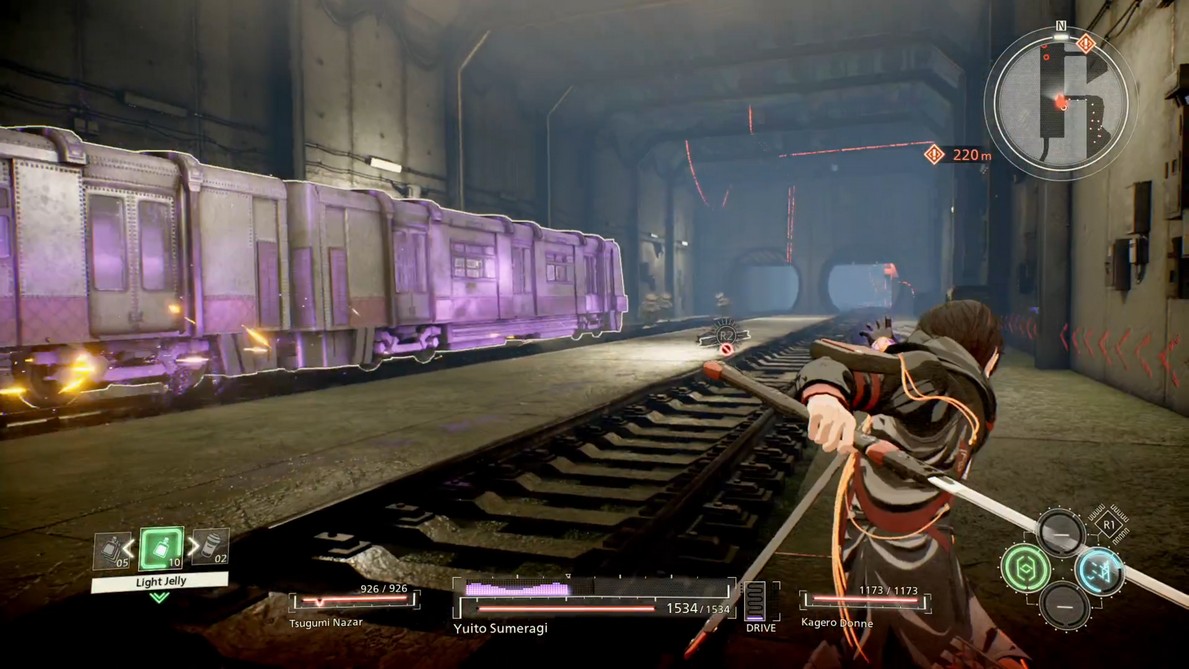 Your companions will not only attack for you, but they can lend you their powers through the SAS (Struggle Arms System). Activating the SAS it will buff your current character by infusing their attacks with elemental properties like fire from Hanabi or detect the enemy’s move with Tsugumi’s clairvoyance. It’s really cool whenever you trigger  SAS abilities, and it reminds me of the assist system from Marvel vs Capcom. You can mix and match these SAS abilities so there are tons of possibilities to experiment on. Plus, the aforementioned bonding time enhances the SAS ability of that certain character, so don’t skip out on any bonding event. 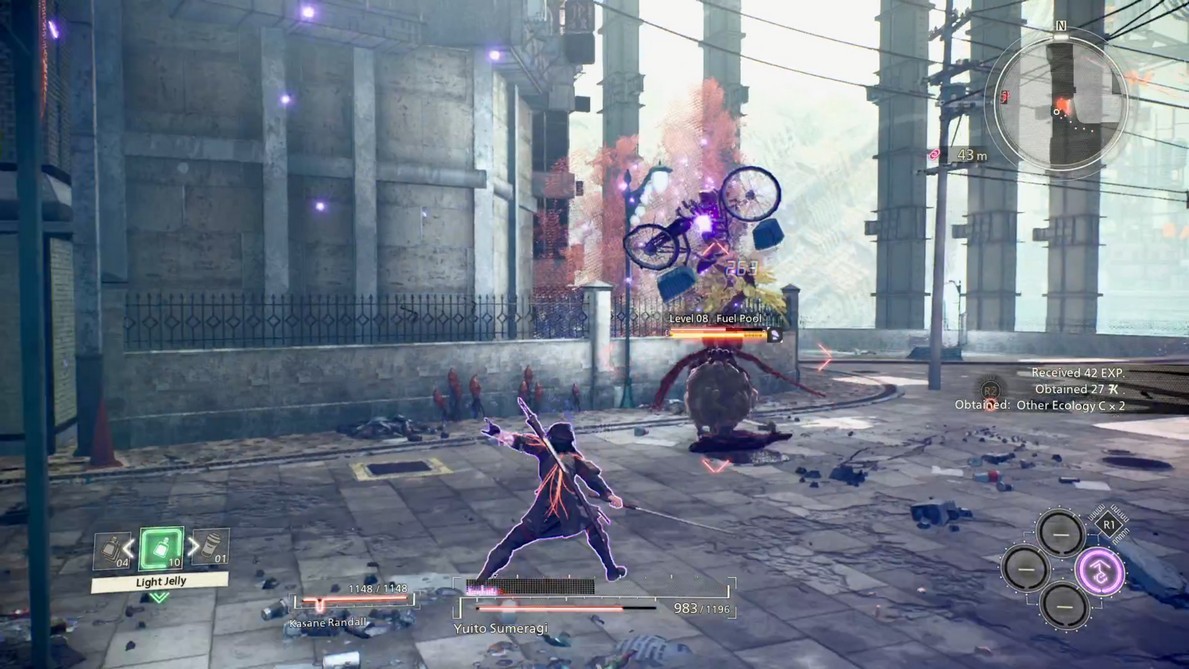 The combat feels right and all complete with the SAS, but it’s not perfect. Sometimes during combat, your attacks don’t land, and the targeting in this game just feels weird. This problem is apparent specifically to Yuito, since his attacks have more openings compared to Kasane. Leaving yourself open is not a real problem though, since most of the enemies here are no threat at all. Not including the Bosses, but most of the OTHERS are just too easy to deal with making the combat with generic enemies feels repetitive and just flashy to look at. Regardless, Scarlet Nexus combat still feels fun despite having this issue. 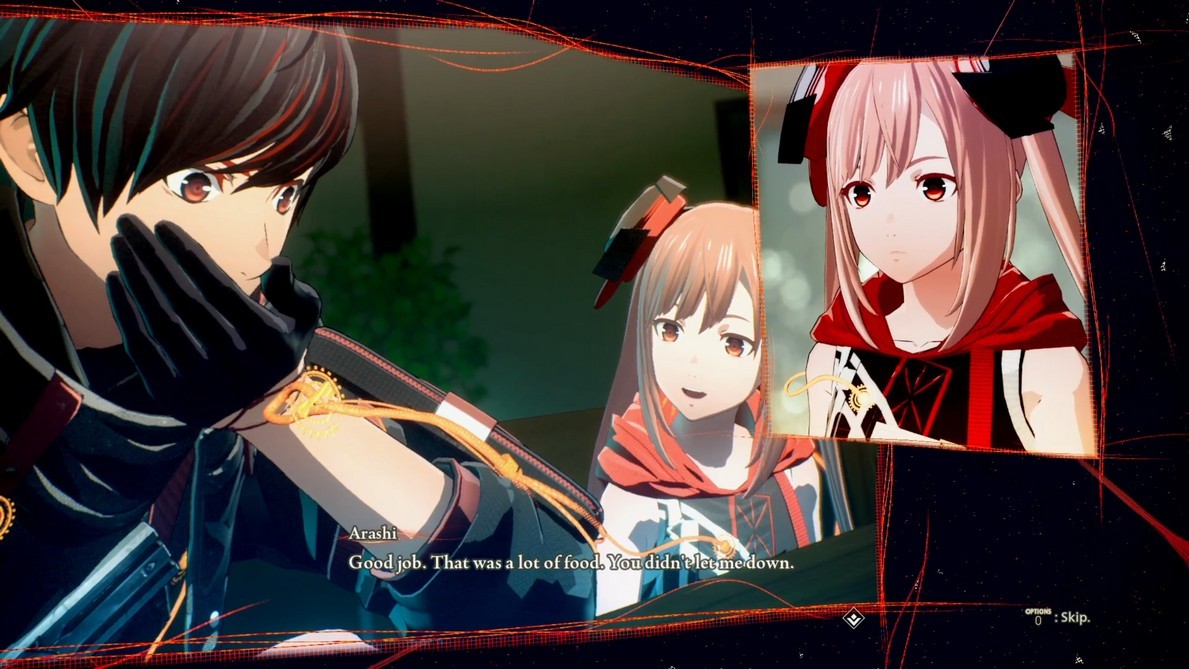 Scarlet Nexus, with its interesting characters and world-building, has the potential to be a great entry to Bandai Namco’s long list of Anime style games. Just like God Eater, they managed to blend fast-paced combat with the Anime-inspired presentation. Although, the combat might feel repetitive most of the time, it doesn’t fully make me feel tired about it. Another thing that they could put some work on is the stage design as having to traverse the same straight road on both characters isn’t too exciting. All in all, despite some of its issues, Scarlet Nexus is really engaging, enough for you to not stop playing it once you start a game.

Scarlet Nexus' strongest point is its whole narrative and anime-style visuals combined with fast-paced combat. Although the combat could use some work and it would help if the stages have more things to do around it, Scarlet Nexus' premise and its characters has built a strong foundation if they ever plan a sequel. So, it's highly recommended to pick this up if you like Anime-style games. Scarlet Nexus Review | Set your Brain Power to the Max