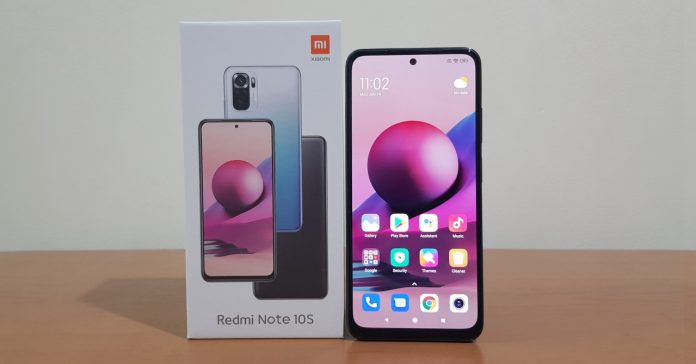 The Redmi Note 10S packs a 6.43-inch AMOLED display, a quad camera setup, and a MediaTek Helio G95 processor. At its price point, these specs area already pretty good, meaning it should be a good deal overall. 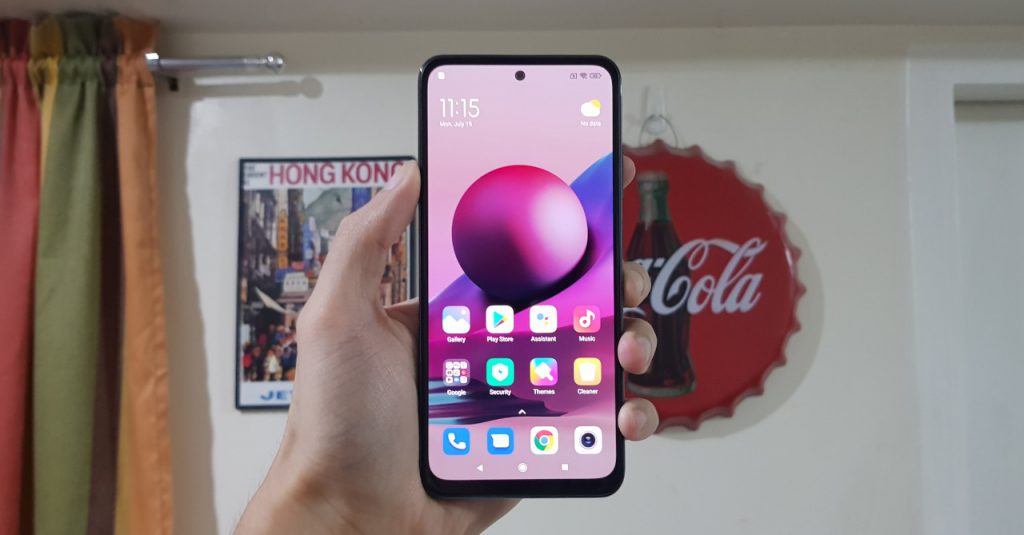 But does this hold true in actual use? And should you get the Redmi Note 10S over the other Note 10 variants? Find out here in our review! 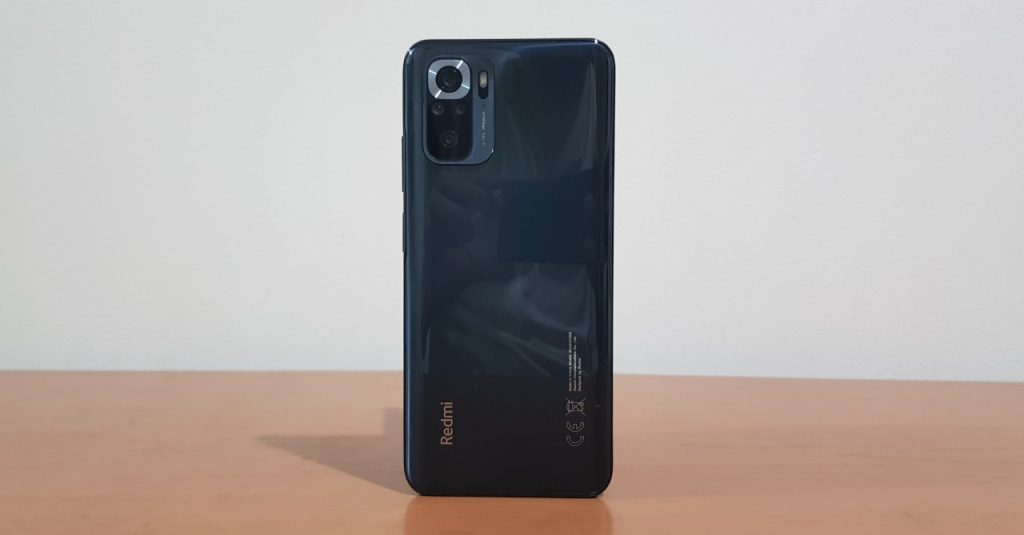 To start things off, let’s take a look at the phone’s design. The Note 10S looks similar to the other Note 10 phones from Xiaomi, with all variants featuring a glossy glass-like back, a small Redmi logo on the bottom left side, and a distinctively-designed camera module. In fact, it can be a bit difficult to tell the three apart. Though if you look closely, you can tell each Note 10 model apart by the designs of the camera module. 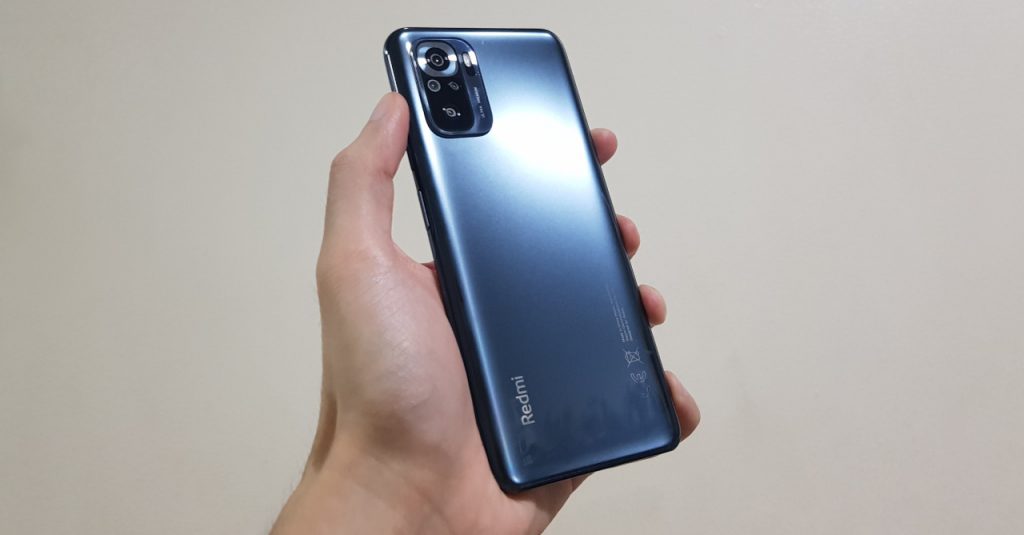 Even if it looks a lot like its siblings, that’s not exactly a bad thing as the Redmi Note 10S looks quite nice in person, especially when light hits the back. Take note though that the phone has a glossy finish, meaning it is quite a fingerprint magnet. Thankfully, the phone includes a free clear case inside the box (which we highly recommend that you use). 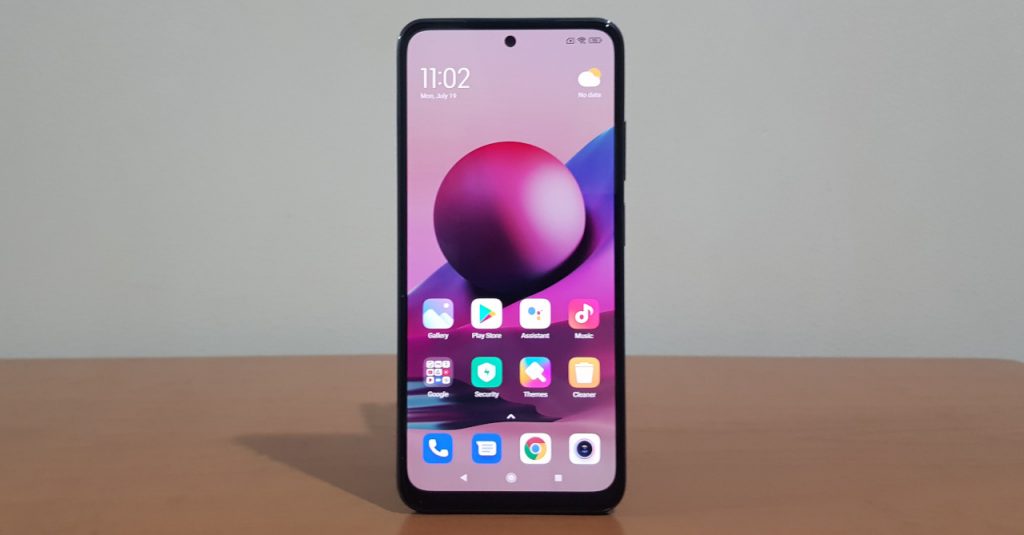 Moving to the front, we have the Note 10S’ 6.43-inch display which has slim side bezels and a holepunch notch at the top. While we would’ve preferred it if the front camera notch was placed on the upper left side instead of the center, this is not much of an issue as it is still small enough to not be distracting. 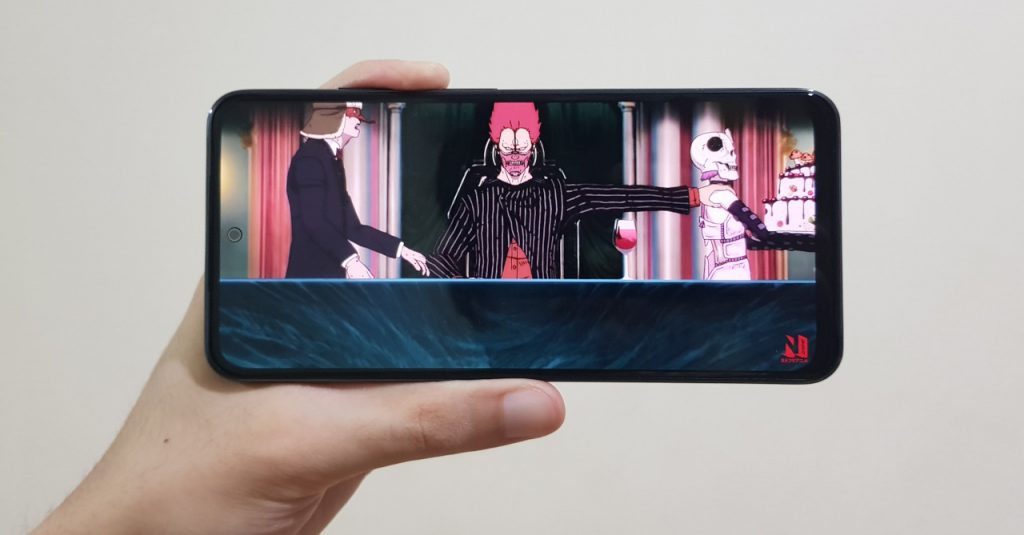 As mentioned in the intro, the Note 10S has a 6.43-inch AMOLED display, and it has a Full HD+ (1080p) resolution. From the looks of it, the Note 10S shares the same screen with the Note 10, meaning this phone’s screen is a great binge-watching partner. Watching movies/shows on the Note 10S is a great experience as its output is sharp, and has vibrant colors to boot.

Aside from the great display, the Redmi Note 10S also has surprisingly good onboard audio for a lower mid-range smartphone. This is thanks to the fact that the phone packs a dual speaker setup (a feature that’s usually reserved for upper mid-range to flagship phones). While it doesn’t get as loud as I preferred, the built-in speakers offer a good viewing/listening experience. Though as with most of our reviews, we still recommend headphones or external speaker for a better experience; good thing the Note 10S packs a 3.5mm headphone jack.

The Note 10S is powered by a MediaTek Helio G95 processor, and the locally-available variant comes with 8GB of RAM. While it’s not exactly a gaming smartphone, the Note 10S proved to be a capable mobile gaming device.

To start with, we tried out less demanding titles such as League of Legends: Wild Rift. The Note 10S was able to run Wild Rift smoothly with a 60 FPS framerate at the High graphics setting. This means popular MOBA titles will easily run on this Redmi phone. 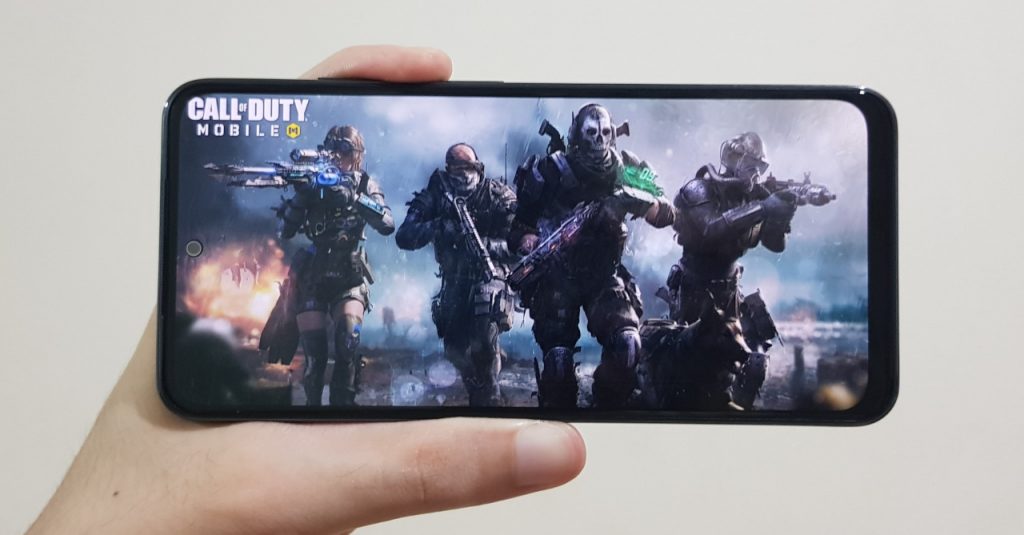 Next up, we tried Call of Duty Mobile. The Redmi Note 10S was able to run the game smoothly at both the Medium and High graphics settings. This should mean fans of mobile shooters will not be disappointed with the phone’s performance. 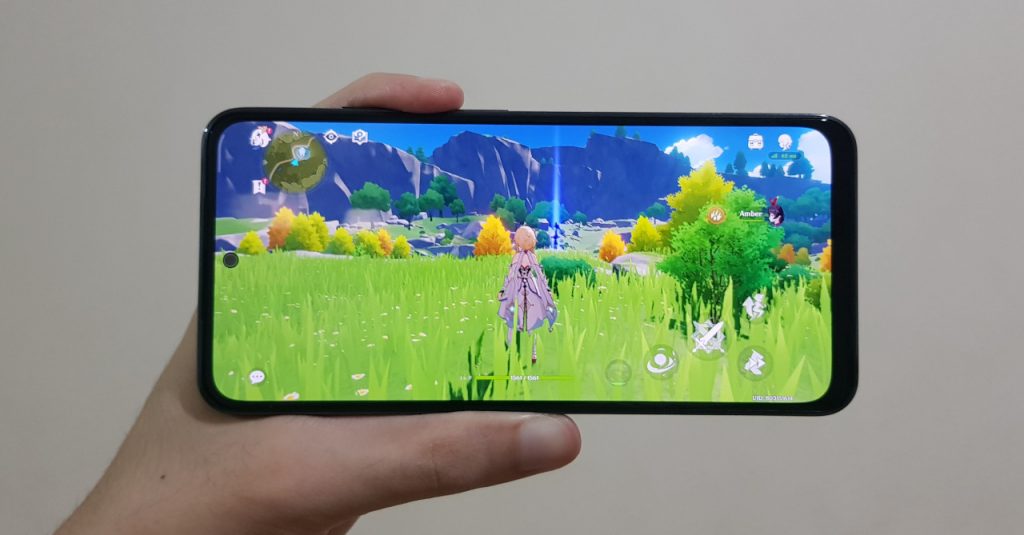 Finally, we tested Genshin Impact, a demanding mobile title. In our test, we found that Genshin Impact is playable on the Note 10S, but only on the low graphics settings. This should come as no surprise though given that pretty much only phones with flagship-level processors can run the game at higher settings.

Xiaomi equipped the Redmi Note 10S with a 64MP main + 8MP ultra-wide-angle + 2MP macro camera + 2MP depth sensor quad rear camera setup, as well as a 13MP front camera. For the most part, this camera configuration is the same as the base Note 10, with the exception of the 64MP camera (as the base Note 10 has a 48MP shooter instead).

Speaking of the 64MP shooter, the Note 10S’ main camera does not disappoint for both outdoor and indoor photos. So long as there’s ample lighting, the phone’s main shooter is able to capture images with good quality.

Moving on to low light, the main camera has respectable nighttime photography performance, though Auto Mode night shots can look a bit soft. With Night Mode though, images turn out a bit brighter and sharper.

Moving on to the ultra-wide, the Note 10S’ 8MP ultra-wide is decent for daytime shots, though as expected, night shots see a dip in quality. Sadly, the Night Mode of the phone’s camera app cannot be used when shooting ultra-wide photos.

For its 2MP macro camera, image quality is on par with most macro camera-equipped budget to mid-range phones.

As for Selfie quality, shots taken by the 13MP front camera should be good enough for most users. Finally, portrait shots have pretty a decent background blur thanks to the 2MP depth sensor.

For day-to-day-use, the Redmi Note 10S proved to be a reliable device thanks to its good performance. Whether browsing through social media, streaming videos, or typing up emails, the Note 10S is fast and snappy. And at no point during our review period did the phone slow down considerably.

Along with great performance, the Note 10S’ battery life also helped make it a reliable daily driver. Thanks to the large 5,000mAh battery, the phone is able to last for well over a day on a single charge. If you do need to charge, you won’t have to wait long as the phone has 33W fast charging support.

If there’s one nitpick that I have with the phone, it’s the side-mounted fingerprint scanner. While it’s fast and reliable, it’s placement caused me to constantly activate it even when I’m just picking up the phone. Because of this, I often locked myself out of the scanner which meant I had to unlock the phone using my PIN. While this was a bit annoying, it’s still a fairly minor flaw. 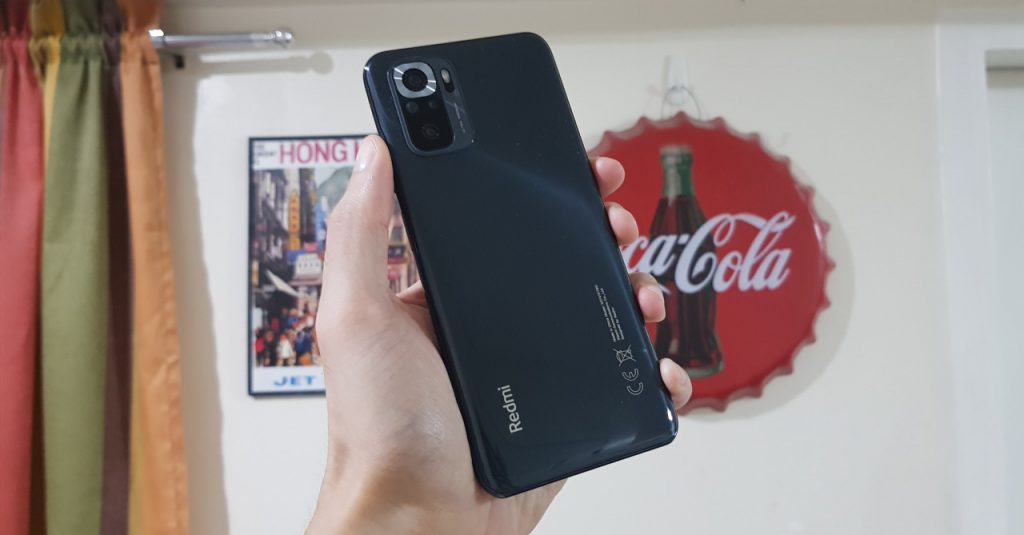 So, how does the Redmi Note 10S fare in actual use? Well, it did not disappoint. Thanks to its good cameras, great gaming/day-to-day performance, excellent battery life, and quality AMOLED display, the Note 10S is another good smartphone deal from Xiaomi.

But should you pick this one up over the base Note 10 or the Pro? It depends on your budget and what features you prioritize in a phone. Still, you can’t really go wrong with the Note 10S given its PHP 11,990 price tag.