Try to survive Ragnarok for as long as you can in this survival game. 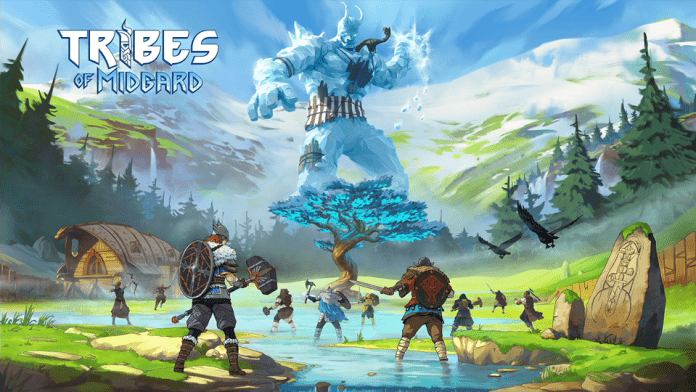 A fast faced, action RPG Rogue-like co-op survival game with time management elements; that pretty much describes the package that is Tribes of Midgard. Taking its own spin on Norse mythology, you are dropped into a procedurally generated world to survive an impending doom in Ragnarok.

There are two major game modes, Saga and Marathon. The Marathon mode usually result in longer sessions. Your only goal is to survive as many days as possible. In the “story-based” Saga mode, you are given quests which you must complete then return to Valhalla to clear. This mode requires less time commitment as the day cycles are shorter and have a faster pace. These can take two or more hours depending on your experience with the game and the overworld’s randomness.

Tribes of Midgard will introduce new content in by way of the different Sagas. Hopefully this will add more replayability to the game. Especially when considering this will be a live service game. 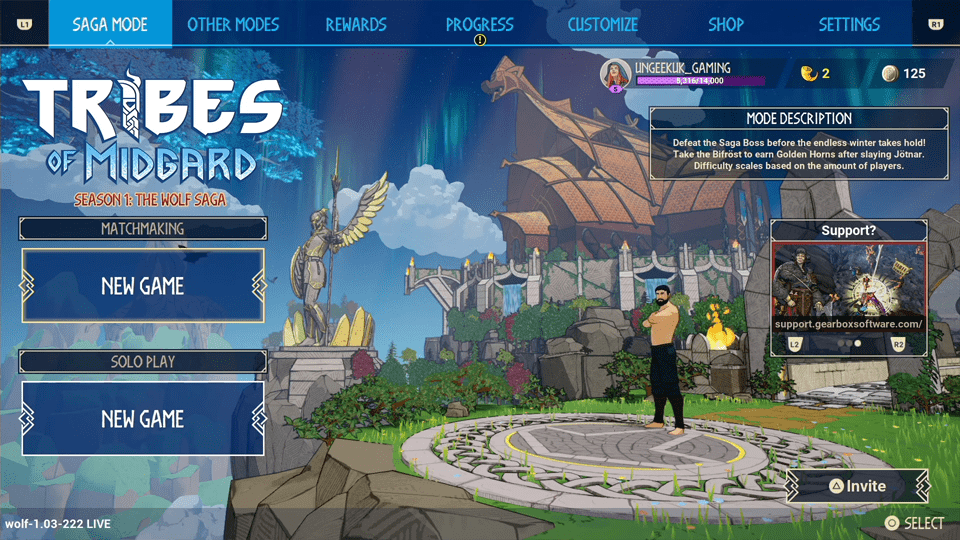 The beginning of the end…

When you are dropped into the world, the village nearby is your hub and the location of the World Tree which must be protected at all costs. If the tree is destroyed, Ragnarok is fulfilled and you lose the game. 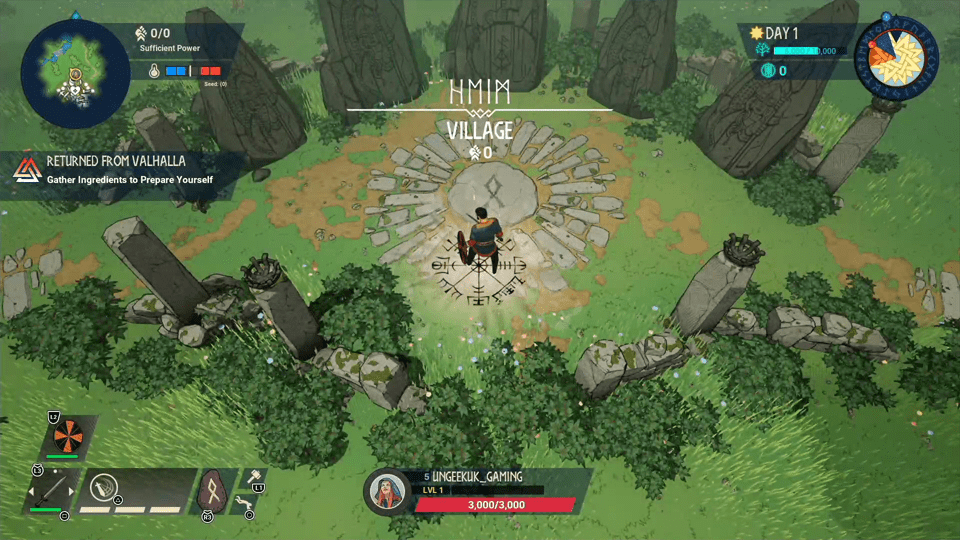 You must gather resources while exploring the map. Most of your actions will reward you with souls, character experience and resources. It can be picking up sticks, mining iron or killing enemies. Souls will be the major resource. It can be used for upgrading the NPCs, placing fortifications and healing the World tree. You must be careful, while death during run doesn’t mean game over, you lose all the souls gathered.

As your character levels up, you earn blessings which allow you to choose one of eight classes and activating skills. You start off with the Archer and Warrior classes. The other classes will be unlocked when completing certain tasks, like the Berserker, which is unlocked when you kill twenty enemies within 10 seconds. These classes will have their own skill tree and play differentiating roles. The Warrior, for example, fights with melee weapons and will eventually unlock the ability to self revive. 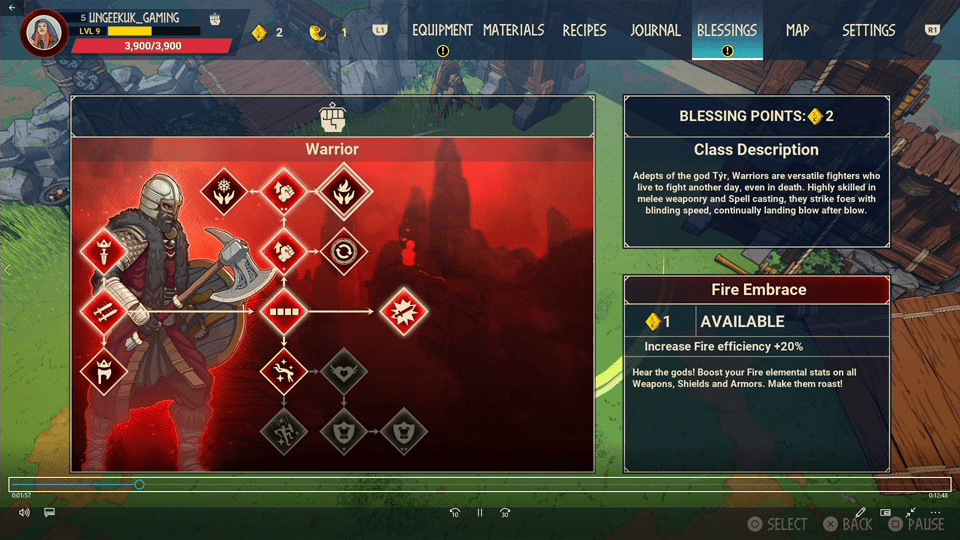 As you play the game, you can start to feel that it is better catered to a co-op experience with friends. This is because various tasks can be delegated between your party which makes pacing easier. The game’s difficulty does scale to the number of players, though certain aspects are easier, especially exploration, since more players can cover more ground.

When running solo in Saga mode, it doesn’t give you a lot of time to breathe and explore its world when the clock is constantly ticking. Not only will you need your character to get stronger, you will also need to upgrade the various NPCs and fortifications in the village.  There is a blacksmith for weapons, armorer for protective gear and a craftsman to name a few.  As they reach higher levels, these will unlock the ability to craft higher tier gear or items. They get stronger as well which is beneficial when defending the village at night. 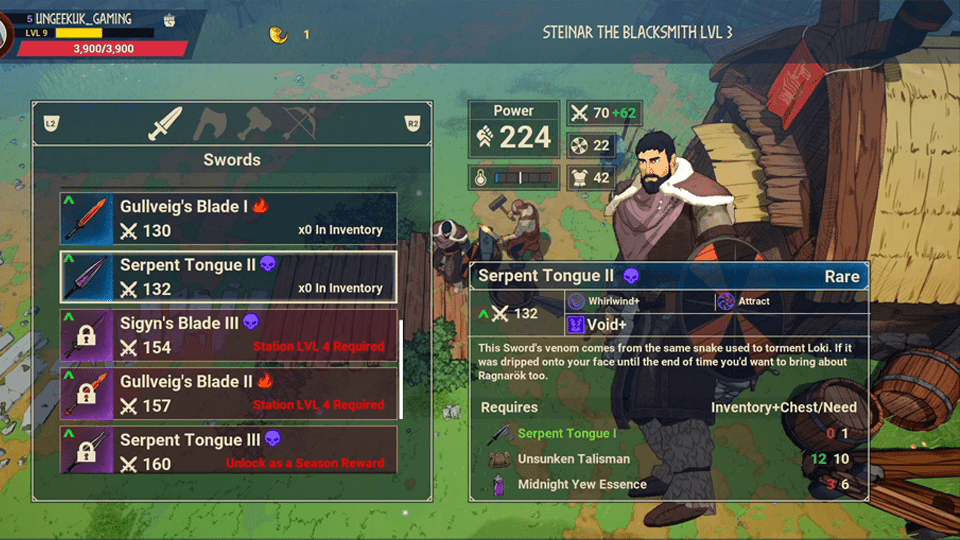 As you venture further away from the village, you start to encounter different biomes. These can range from swamp lands, deserts and frozen tundra. These come with their own set of enemies and resources, which are needed for crafting higher tier equipment. You must also consider the battle power required and environmental hazards in these biomes. These can hinder your exploration until you have better equipment.

However, going too far can be risky, as Helthings will gather to attack the village once night falls. These grow stronger as each night passes, and this is why it is good to find waypoint shrines around the map which grant fast travel. In emergencies, you can also use a rune to teleport back to the village, but that has a long cooldown. 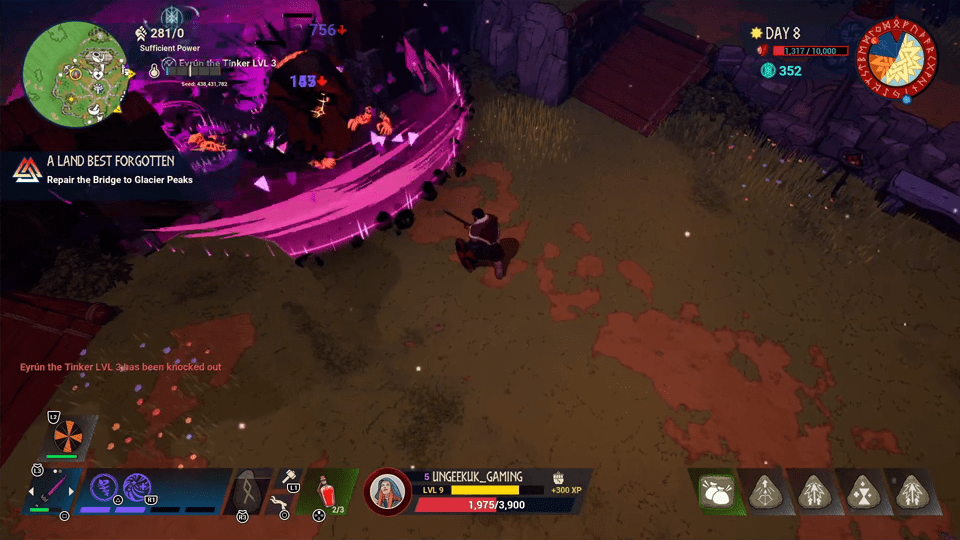 Combat in the game is fairly simplistic, but it kind of works with the pace of the game. You have a basic attack which varies depending on weapon type. As for magic, these will depend of the specific weapon and your class. As your gear goes up in rarity, you gain more magic abilities. In co-op, having a diverse party of classes can help when in a group fight, especially when the Jotunn arrive. These towering giants will spawn some distance away and will slowly make their way to your village. While they do move slowly and their attacks are easily evaded, they have a huge health pool. As such, you have to intercept them at the best opportunity before they reach the World tree. 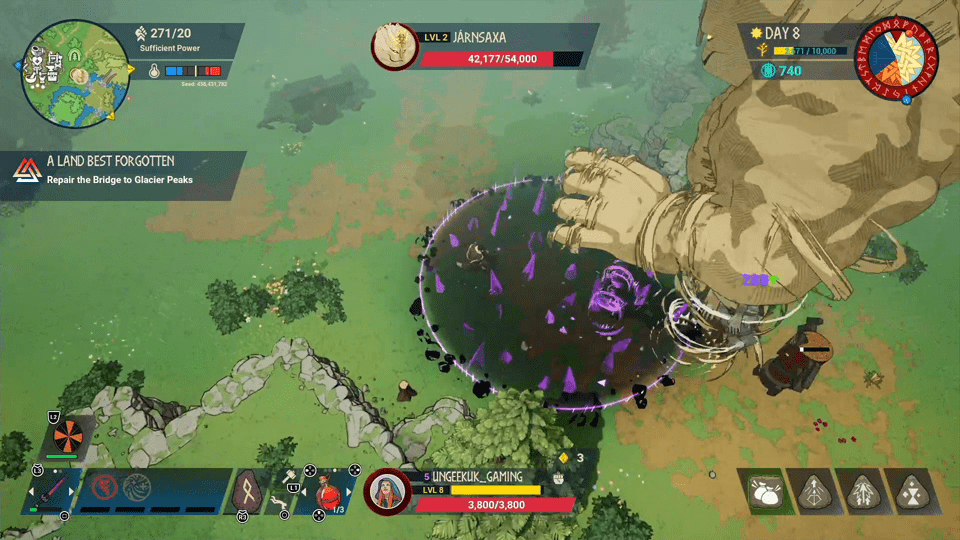 You will always have to return to Valhalla to earn rewards. If you either clear all the major quests and defeat the final boss or the World tree gets destroyed, you are rewarded based on your performance.  As you start over and over, you then begin to have a better understanding of juggling the various tasks needed to grow stronger and complete quests. The game encourages trial and error, as it still rewards you with progression rewards even if you fail a run. 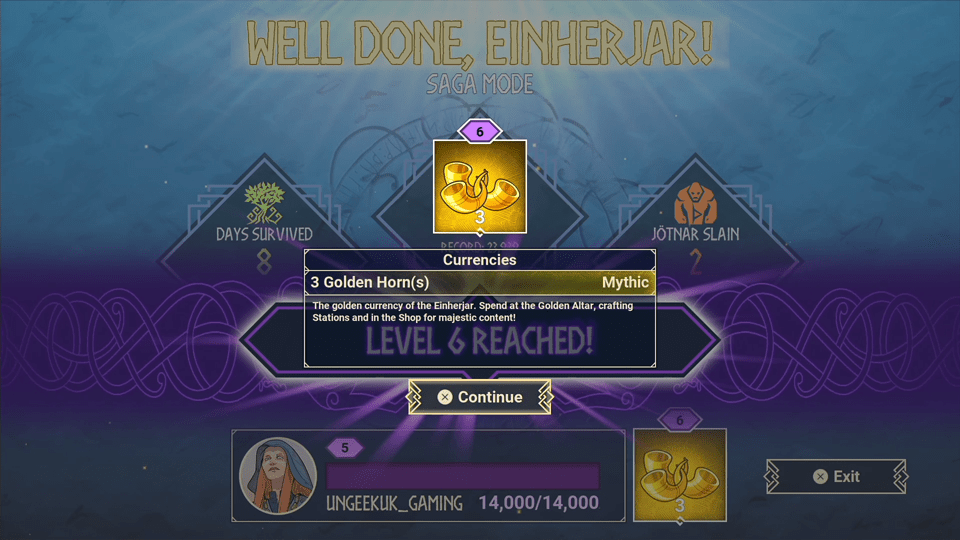 Completing challenges and achievements help unlock starter kits which make your next run a little bit easier. This can provide a weapon and armor set to start with or an axe and pick which makes early game resource gathering slightly easier.

Although, this is where I ran into most of my troubles with the game. I encountered an error multiple times where in the game is unable to completely record the challenges completed during my last run. As such, certain challenge rewards could not be claimed even though the claim button is available. Its disheartening since you need to complete challenges to unlock new classes. However, because of this error, I would need to complete another run and the same challenge all over again. So instead of being able to try out the Sentinel or Berserker, I had to do an additional two runs just to get the challenge to unlock the classes.

If your looking for a game with steeped in Norse mythology, Tribes of Midgard is something well worth checking out. When playing solo, it can feel daunting at first, but as you experiment and explore, you become more able to improve with later runs. But, Tribes of Midgard is definitely a game best played with a group of friends, meaning this is a more worthy pick up if you’re on the lookout for a co-op game. On top of this, the game will also get new content in the form of Sagas, so this may be an enjoyable experience in the long run.

Tribes of Midgard is an interesting survival game that's steeped in Norse Mythology, and features a compelling gameplay loop. While the game can be enjoyed solo, it is still best played with a group of friends, making it a nice pick-up for players who want a new co-op experience. Tribes of Midgard Review | Time Management Ragnarok