‘The Matrix Awakens: An Unreal Engine 5 Experience’ showcased at the Game Awards 2021

The Matrix Awakens is out now for free on PS5 and Xbox Series X|S. 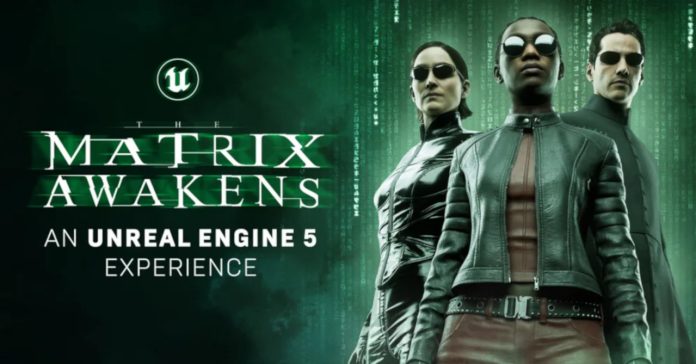 Fans of the Matrix franchise were treated to a brief cameo courtesy of the always breathtaking duo of Keanu Reeves and Carrie-Anne Moss towards the end of the 2021 Game Awards. What made this particular segment even more breathtaking was a reveal trailer featuring cinematics and brief gameplay for The Matrix Awakens: An Unreal Engine 5 Experience.

Watch the trailer for the “experience” here:

This new demo highlights the graphic capabilities of Unreal Engine 5, which has since been the main powerhouse behind the latest games including those featured in the Playstation 5’s library. Though it’s made more to showcase UE5, and it doesn’t seem to be a demo for a future Matrix title.

Keanu Reeves is well-known in pop-culture cinema for his role as Neo in the Matrix Trilogy, John Wick in the eponymous franchise. As of late, he’s garnered a new level of popularity in the gaming community as Johnny Silverhand in Cyberpunk 2077, the latest release by Polish game studio CD Projekt Red.

The Matrix Awakens: An Unreal Engine 5 Experience is available now on Playstation 5 and Xbox Series X|S.

- Advertisement -
Previous articleForspoken gets a new trailer and release date at The Game Awards 2021
Next articlePersona 4 Arena Ultimax releases on PS4, Switch, and PC this March