Time to ignite that SPARK. 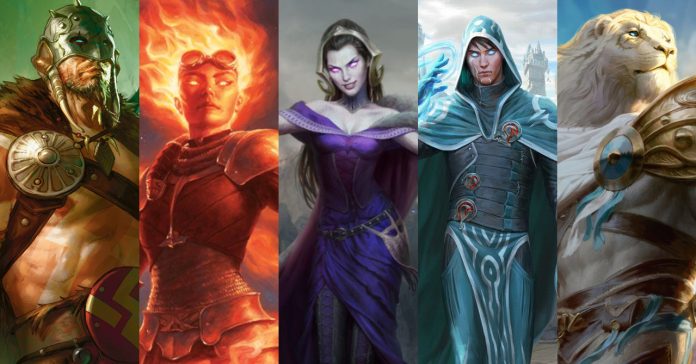 Nearly 30 years and almost 100 sets and expansions later, Magic: The Gathering is still going strong in the collectible card game scene, with no signs of stopping. From the rich lore spanning numerous planes in the multiverse, to its often imitated mana-system, this TCG is really up there with the best of them… Not to mention the very first to arrive at the scene.

Fast-forward to today, Magic: The Gathering is bigger than ever as they try to expand with Universes Beyond, tapping well-known franchises such as Dungeons and Dragons, Lord of the Rings and Warhammer 40k hoping to pull some fans from that wheelhouse and in to some spell-slinging. But the question remains, where do you, a curious little planeswalker can possibly start with? Because it can be a bit overwhelming.

If you are a seasoned MTG player, you might be familiar with the formats I will mention but I would still urge you to stay for awhile because who knows, you might find something here that you haven’t tried yet. Maybe even discover a new way to play and appreciate the game.

For the newcomers though, finding a jumping-off point and starting to play Magic can be really difficult. Aside from our friendly local game stores that are 100% more than willing to teach you a game or two, with a bajillion cards and numerous options of play to choose from, where can a budding planeswalker possibly ignite his spark first? What are the best formats for Magic: The Gathering: beginners?

Look no further, people! Like the five colors of mana, we list our top 5 ways to get you started in this wonderful hobby.

Small disclaimer: This article is dialed to a board gamer’s perspective. Which means that there will be little to absolutely no mention about strategy, deck construction, current meta and ways to dominate your opponent. Like a self-contained board game, our aim is to easily pick up, approach and teach MTG to new players – to gather as much planeswalkers as we could and keep this at a very beginner and casual level, aiming for fun and appreciation of the game’s tried and tested mechanics.

Lastly, before you guys get out and play, make sure to be vaccinated and be aware of your area’s protocols with regards to the pandemic. Best be safe out there first!

With that out of the way, here we go!

5.) Magic: The Gathering-related Board Games

Speaking of board games, I might be cheating here a bit because there are at least three here that might be worth your time.

Arena of the Planeswalkers

Arena of the Planeswalkers is a turn-based tactical board game based on an old system from Heroscape. The game can go for 2-5 players where each player takes control of planeswalkers with varying power, a small army that you summon, and deck of 12 cards.

Like its OG card-based brother, the game is structured and straightforward enough to setup and play. Normally, there are three ways to win: be the last planeswalker standing, have the most points at the end of the last rounds, or meet a specific victory condition based on the scenario. If you are looking for a more visual and immersive way to dive in to Magic, you might want to check this old game out. 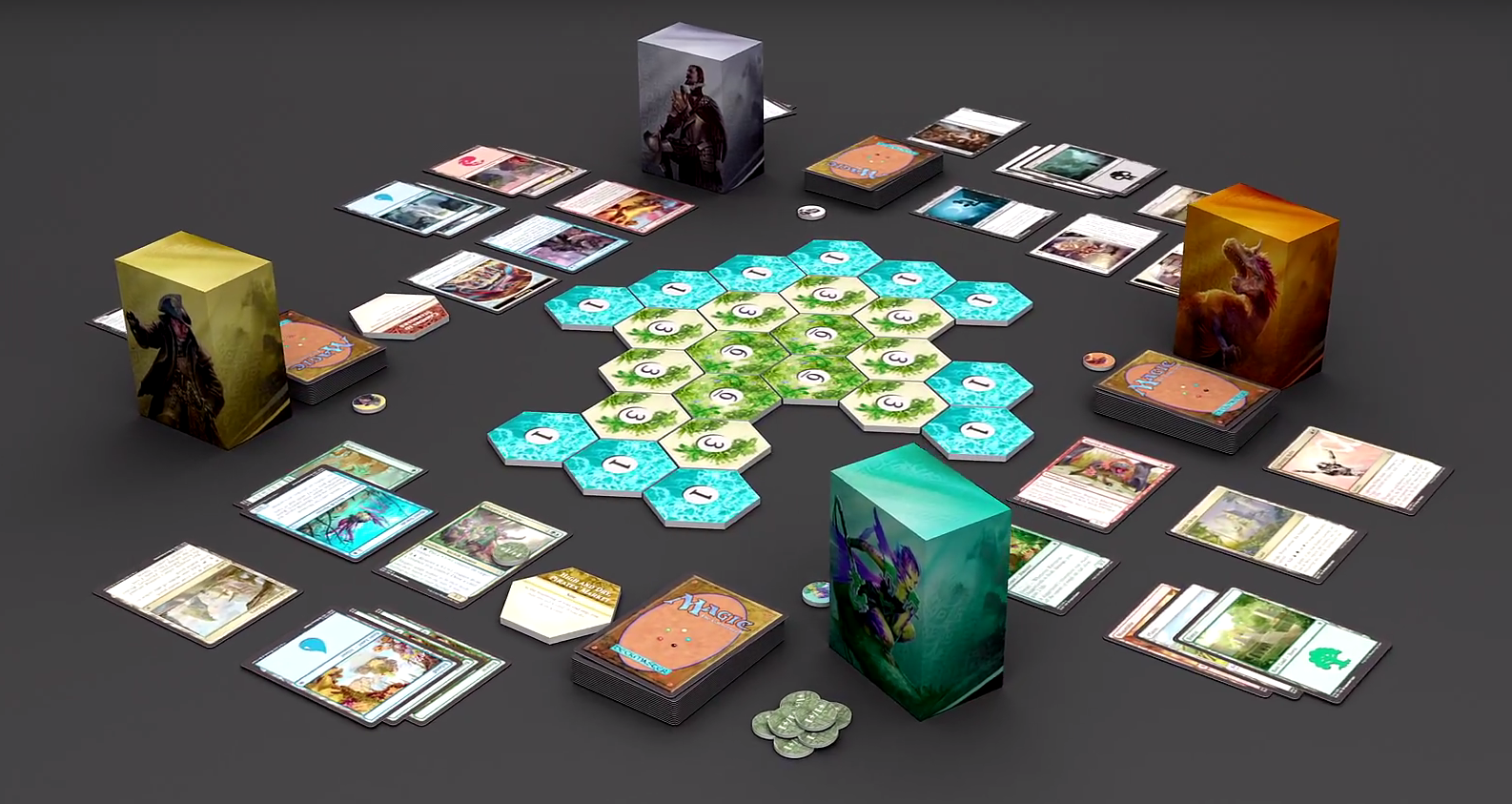 Explorers of Ixalan uses actual Magic: The Gathering cards and incorporating it with some hexagonal Catan-like tiles, with emphasis on “exploration”. In this game, up to four very varied guilds (dictated by their own 60-card deck) explore and utilize the landscape at the same time trying to control various locations. 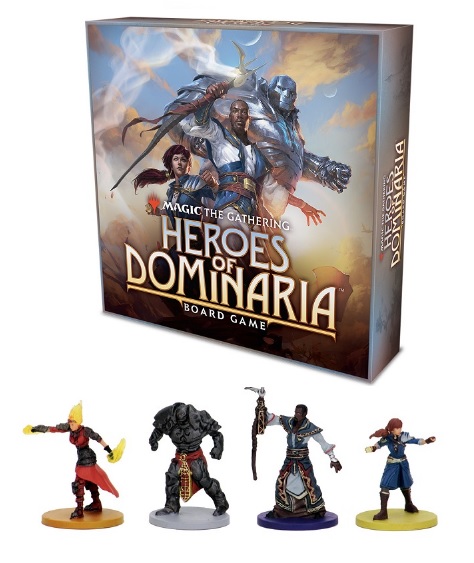 One of my favorite mechanics in board games is worker-placement (Agricola, Viticulture and Caylus come to mind) where you occupy a spot for a turn, getting all the resources on that location at the same time denying an opponent entry. Its a simple and elegant mechanic that stands the test of time. This is done quite well in Heroes of Dominaria. And though it wasn’t necessary in a Eurogame, there are some really nice painted miniatures included in the premium version of the game that added a bit of bling to an otherwise dry-looking board.

This is Magic: The Gathering on your PC and mobile device!

Magic: The Gathering Arena, to some paper players might be a god-send especially in this pandemic as it effectively brings the game to the comfort of your home where you can play anytime and anywhere. For newcomers, this might be your most accessible way to try out the game and learn the rules, as it has an easy-to-follow tutorial mode where you can have a game or two with the A.I and learn the game’s intricacies. 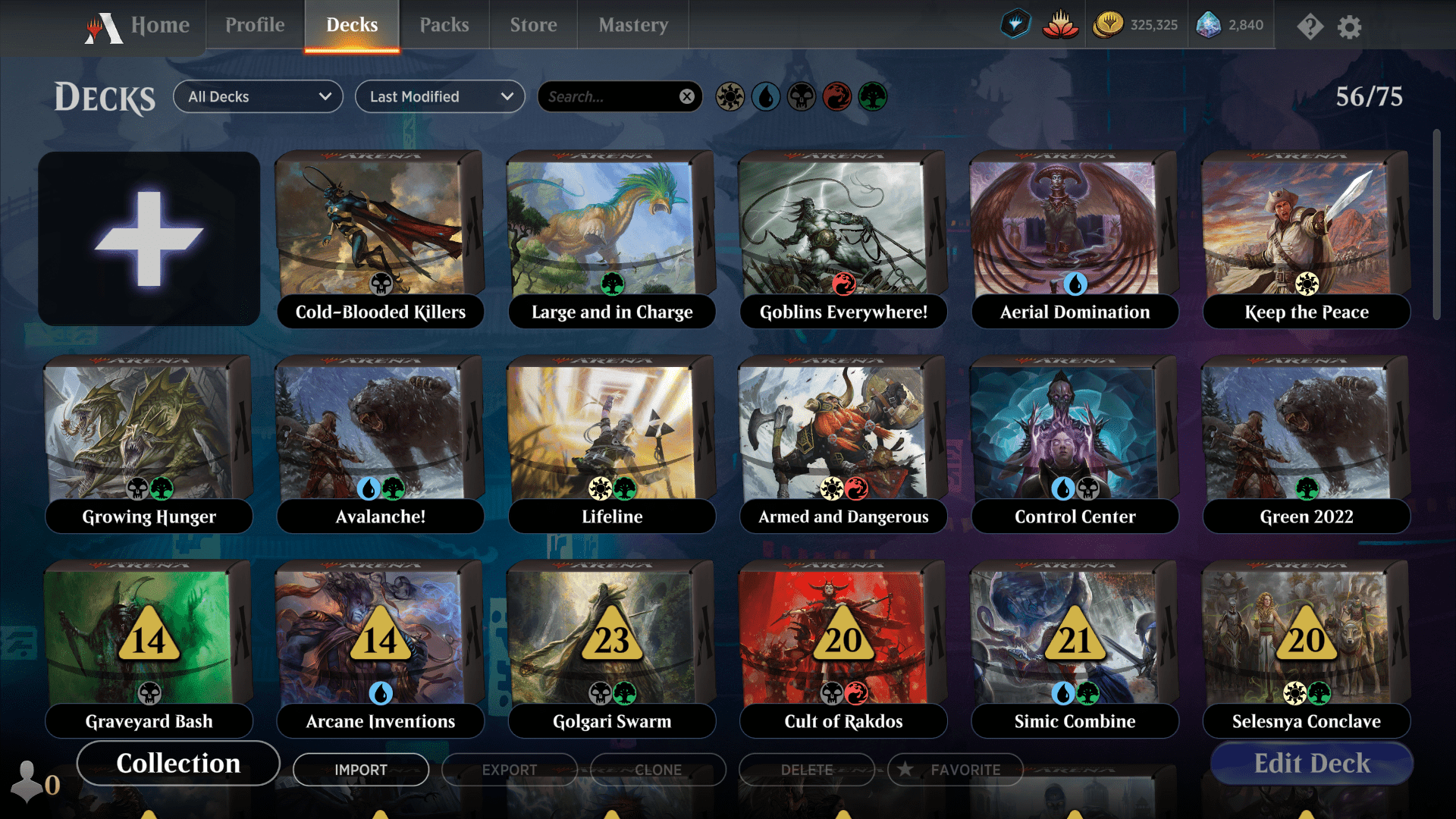 When you feel like you can take it up a notch, the game happily gives you some starter decks based around the game’s various themes where you can playtest and brew to your hearts content. 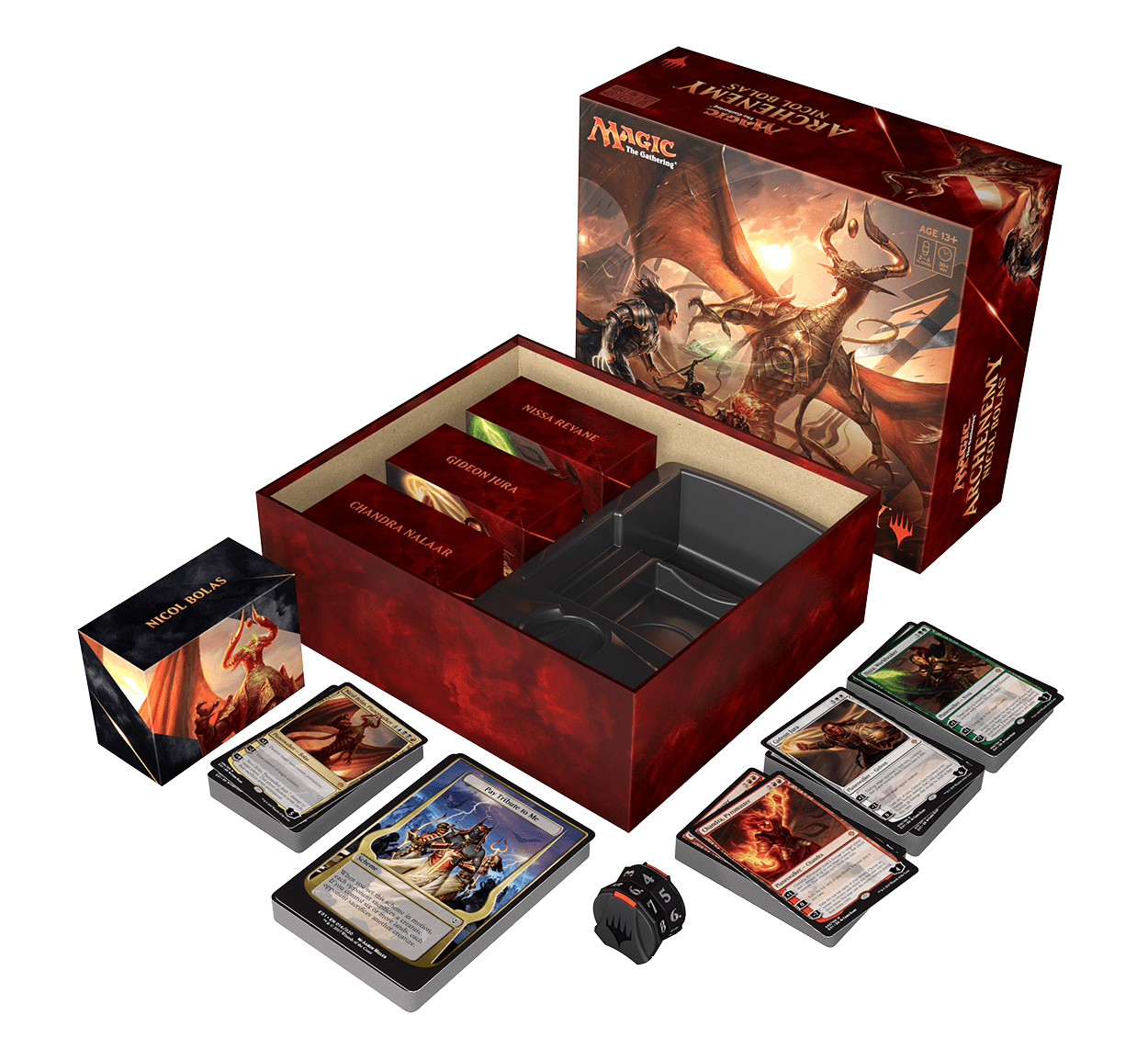 Another fun format that focuses on a strict 3 versus 1 player structure, Archenemy is an interesting format where you and three friends take the role of popular planeswalkers (Chandra, Gideon and Nissa) as you take on arguably the most baddest elder dragon this side of Dominaria – Nicol Bolas! While 3 versus 1 might seem unfair for Nikky B, he usually has ways of turning the game to his favor with his own deck of “scheme cards” that he plays at the start of his turn, usually granting him bonus effects or creating some nasty board conditions that hinder the course of our heroes.

Arguably the most popular format right now, EDH (Elder Dragon Highlander) or simply Commander is a multiplayer game where you represent a legendary character and a deck of 99 strictly-unique cards that is mostly synergistic with your hero. Since there are a lot of players, the life count in this game will be a bit higher a 40. As you would expect for a free-for all setting, players are always at their toes checking each other player’s board states. But what really shines in this format apart from the others is the way the game naturally encourages players to negotiate or use politics with one another, leading to some fragile alliances and/or inevitable betrayals. 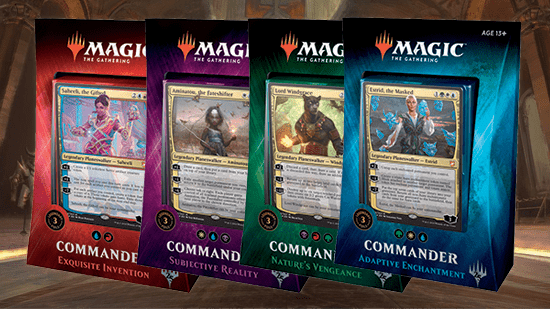 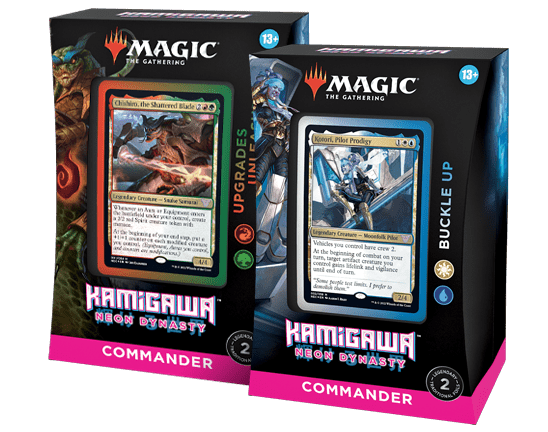 While it might be a bit daunting to build a 100-card deck, for starting players a lot of ready made pre-constructed decks are easy accessibly online or via your friendly local game stores. Right out of the box, these are very complete and functional decks that are ready to play with friends. Though they release waves of these products yearly, as of this writing they seem to change the way these EDH decks roll out, usually being in-line with the game’s most recent expansion. For me, this is a win for new players, as there are more decks to choose from!

To give you an idea on how awesome the format is, look no further and check out The Command Zone Podcast’s YouTube channel. Check out the video above that features one of the game’s most recent sets – Innistrad: Midnight Hunt. Seriously, they rock! 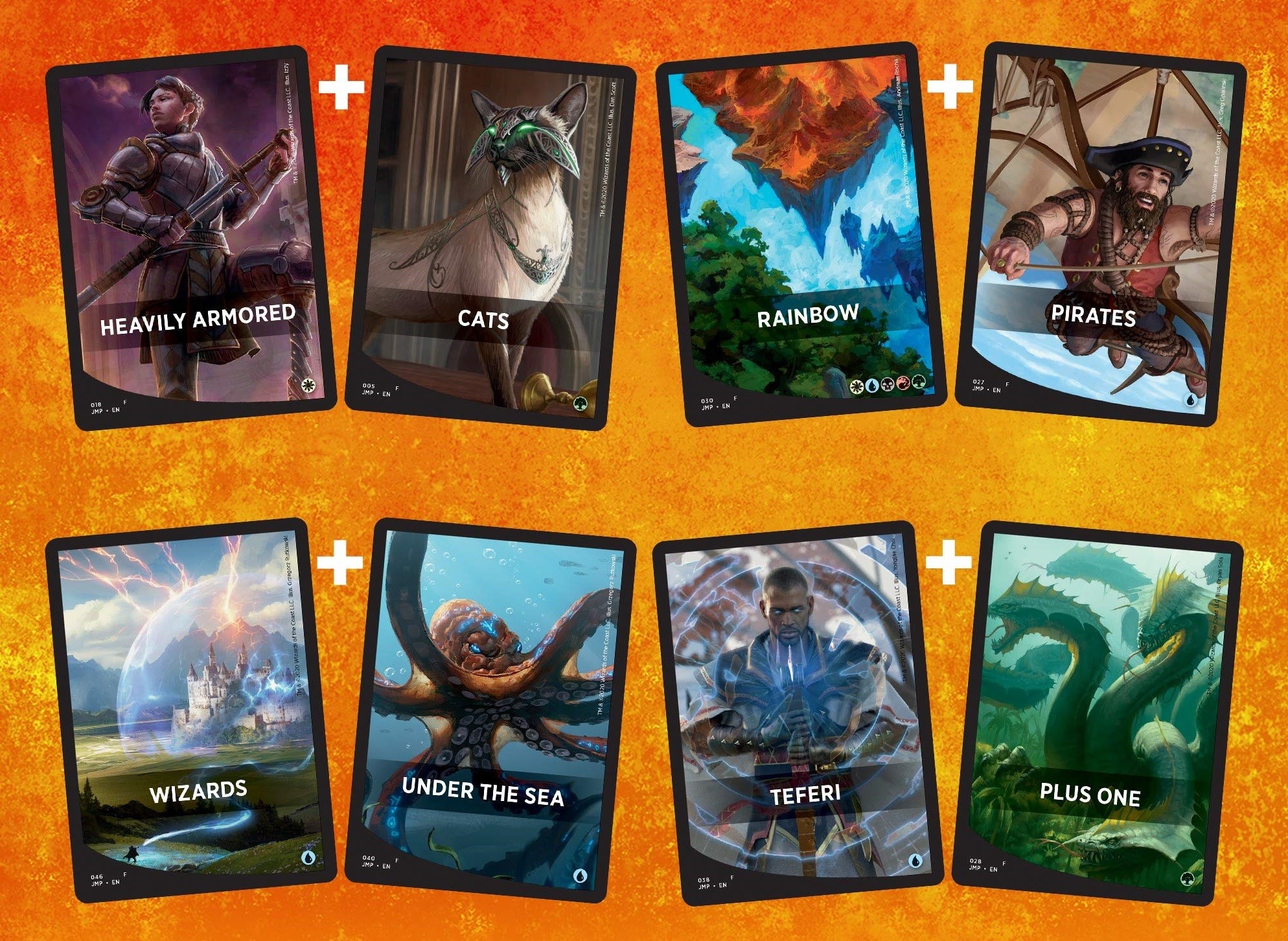 If I would introduce someone in to playing some tangible, paper Magic: The Gathering… Hands down, Jumpstart is the way to go! Based heavily on a popular board game called Smash-Up!, in this format players combine two, 20 card themed decks making it into one unique deck. Fancy some heavily-armored cats? How about some Tree-Hugging Pirates? With 46 unique decks to mix and match with (and more half-decks on the horizon), the fun combinations are literally astronomical! 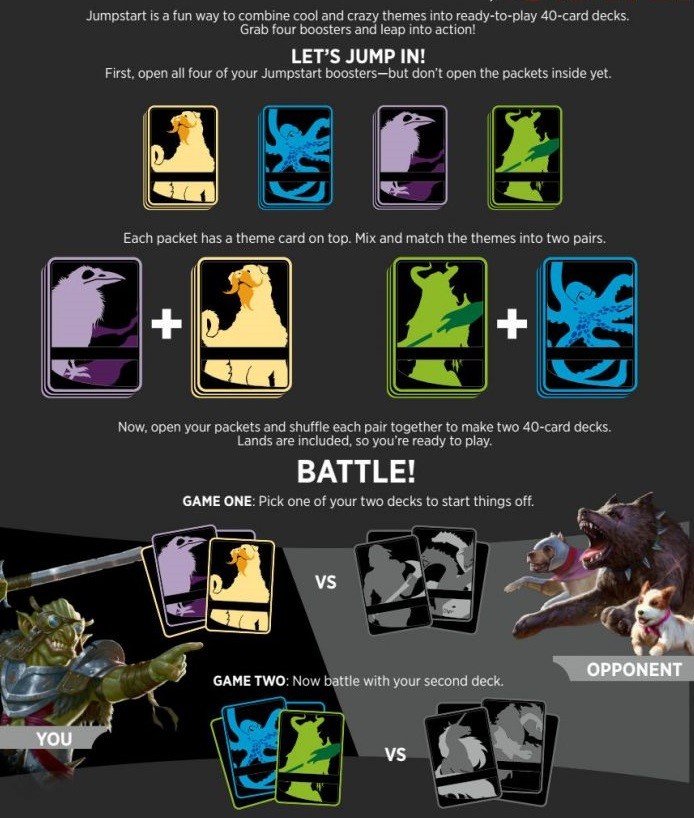 With all the formats floating around, I’m really happy that they went with this route. While it effectively simplified the deck-building aspect of the game, they did not sacrifice the replay value to be had while still retaining the core Magic: The Gathering mechanics. Kudos to the design team over at Wizards of the Coast for making this product and giving this an abundant print run. 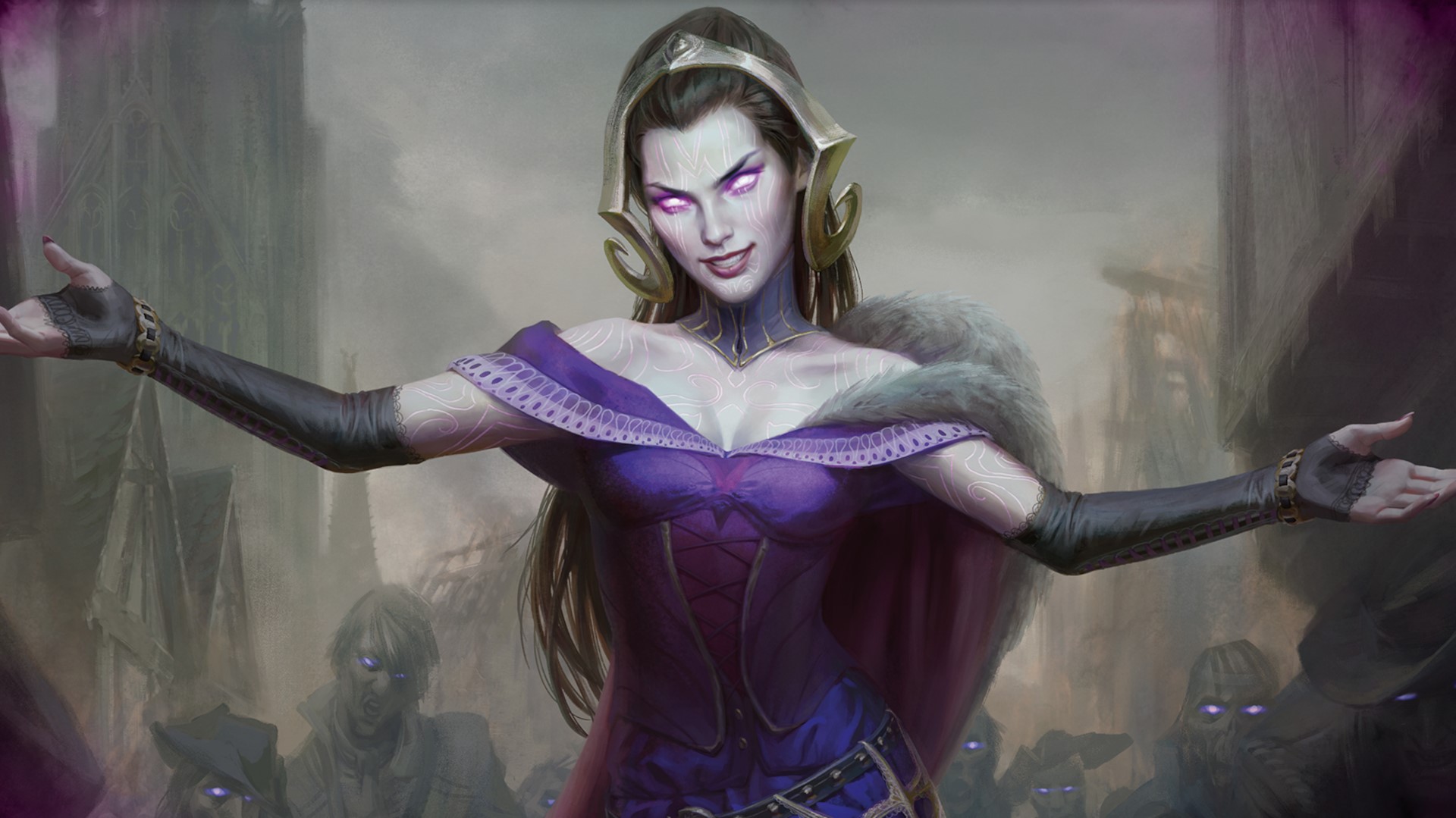 And there you have it, folks! I hope this guide helps you begin your Magic: The Gathering journey and have the greatest time playing. Because honestly, the best experiences I had with playing this game is at my house. On a kitchen table. With friends. And I will never replace that feeling for anything.