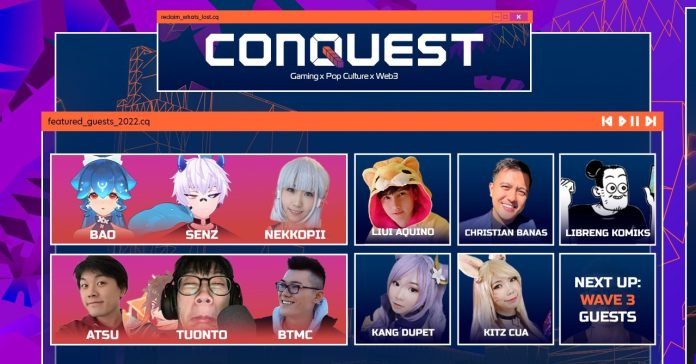 After a two-year wait, CONQuest Festival is back and better than ever, with lots of exciting guests coming as well. After a very successful launch in 2019, they’ve made an epic comeback–and they’re going international.

In case you missed their announcements, the first wave of guest announcements was released last May 4th. We get a star-studded lineup from the get-go. Very nice.

They just dropped the second wave today, and things just keep getting better. Christian Banas of Genshin Impact fame (the voice of Thoma) was one of the first international guests to be announced, and it would’ve been naive to think that the Genshin Hype Train would end there. Alongside him on Day 2, we have “AsianGuyGenshin” Atsu, and “#1 Jean Player NA” Tuonto–two of Genshin Impacts most prominent content creators to date.

Popular Vtubers Bao The Whale, Senz, and Nekkopii will be making appearances as well. Cosplay content connoisseurs Liui Aquino, Kang Dupet, and Kitz Cua will be dazzling us with their characters. Last, but not least, we’ll all be getting a taste of some Libreng Komiks-brand humor. I must say, that’s a pretty swell day 2.

Now, we’re all probably wondering who else will be gracing our presence. We can only assume at this point. In any case, the announcement for Wave 3 is just around the corner, so best believe we’ll be keeping you guys posted.