Stranger Things Season 4 promises to be the biggest and darkest season to date! 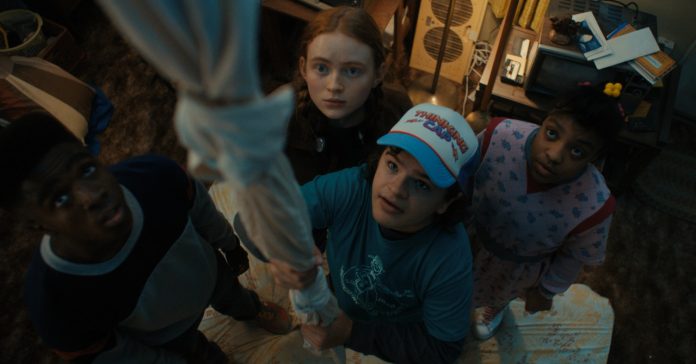 Stranger Things Season 4 is premiering very soon, and ahead of its release, the cast of the show shared the most exciting things and what fans should expect in the upcoming season.

As the penultimate season to the hit Netflix series, Season 4 is shaping up to be the biggest and darkest of the show, making it a must-watch for every Stranger Things fan (and for everyone with a Netflix account for that matter).

The following is a partial transcript of the Stranger Things Season 4 cast press conference for Asian media.

This season is a lot darker than what we’ve previously seen, possibly the darkest by far as everyone has grown up with the series from the start. I’m curious about your thoughts on how this season progresses.

Noah Schnapp: It’s a lot darker. Yeah, I mean, it’s crazy. I remember I just watched the first two episodes because they just sent us the first four. And it just shocked me how crazy and scary it is because every season when we do this press [tour], I always say it’s so much darker. It’s so much bigger. And it’s just the classic thing you say with Stranger Things. But this season, when I was watching it, I was terrified for some of the parts, so it is definitely darker and scarier.

It’s been six months since the Battle of Starcourt. And from what we can see in the trailer, Eleven and her friends have to live separately for the first time. What do you think was happening in the span of those six months?

Gaten Matarazzo: That’s exciting. I think it’s really fun to have that bit of a time jump with each of the seasons. There’s always a good chunk of time that we don’t get to see as audience members, but you kind of figure it out.

In the early episodes of the show, and I think primarily what we’re going through, especially the kids is we’re starting high school and we’re starting high school without a good chunk of our friend group. We miss them very, very much. Obviously, it’s also a very transitional time for us and not only are we struggling with dealing with regular things like fitting in a new in a new social climate, but also trying to cope with everything that has gone on in the past six months, and especially now because the town knows that something is up in a way. They know that there was a big tragedy in town, and the mall burning down was obviously taking a toll on a lot of people, especially for those who know what really happened at that point. I think it affects some characters more than most considering who they lose and what they lose. But yeah, it’s really cool to see how that unfolds through classic good old Stranger Things storytelling.

During the time you were away from set because of COVID, did you guys miss each other and did you keep in touch?

Sadie Sink: COVID was a weird time when we had to shut down because we really didn’t know when we were all going to be able to go back to work. We always do keep in touch and communicate individually with one another. So, we were excited to come back to work and then for everything to just shut down indefinitely, was kind of wild, but we were really grateful when we did get the opportunity to safely return back to work.

After a long break, what was it like during the first few days back on set filming this season?

Natalia Dyer: Kind of hard to imagine. I remember it was quite different. I think we’re all so happy to go back to work after everything and so happy that they were able to figure out a safe way for us to go back. It was little different. Obviously, everyone’s wearing masks, but yeah, it was just kind of amazing to be back on set and working again and to keep going with the story that we’re trying to tell. It was a good break from maybe March until September, but I think we’re all just very grateful that they found a way for us to keep going.

How is the season different from previous seasons?

Maya Hawke: The party line is that it’s darker. But I think it’s also so much bigger in terms of the relationships and the dynamics. I’ve gotten to see some of the episodes and there’s just so many storylines and so many interconnected details and it just feels like, the scope is huge. So, I think this season is darker and bigger [overall].

How do you build the chemistry with the recurring cast who have grown together over the previous seasons? And how would you describe your character?

Joseph Quinn: I think establishing the chemistry is in the writing. I think the Duffer Brothers are brilliant in establishing all of the new characters quickly, and you get to know them quickly. You kind of know who they from the first episode.

How much have the characters evolved in this season from the last Maya, would you like to take this last one?

Maya Hawke: I think that all the relationships evolved a lot and everybody gets to know each other better. And I think the group as a whole and the complete cast, which is such an honor to be a part of, is such an unbelievable ensemble of actors, and it’s just such a special environment. And I think all of those relationships are just really amazing.