Is Roll7's new roller skating shooter worth getting? 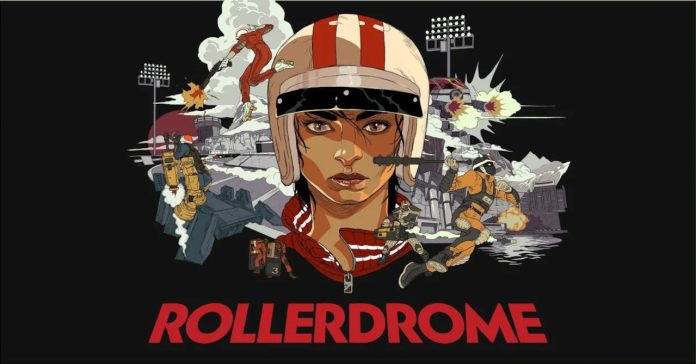 Roll7 has given us quite the treat when it comes to skating games. OlliOlli World never failed in bringing a worthy challenge in terms of games that had an otherwise cutesy, casual appearance. Quite the head trip, indeed. But now, it’s quite the headshot. 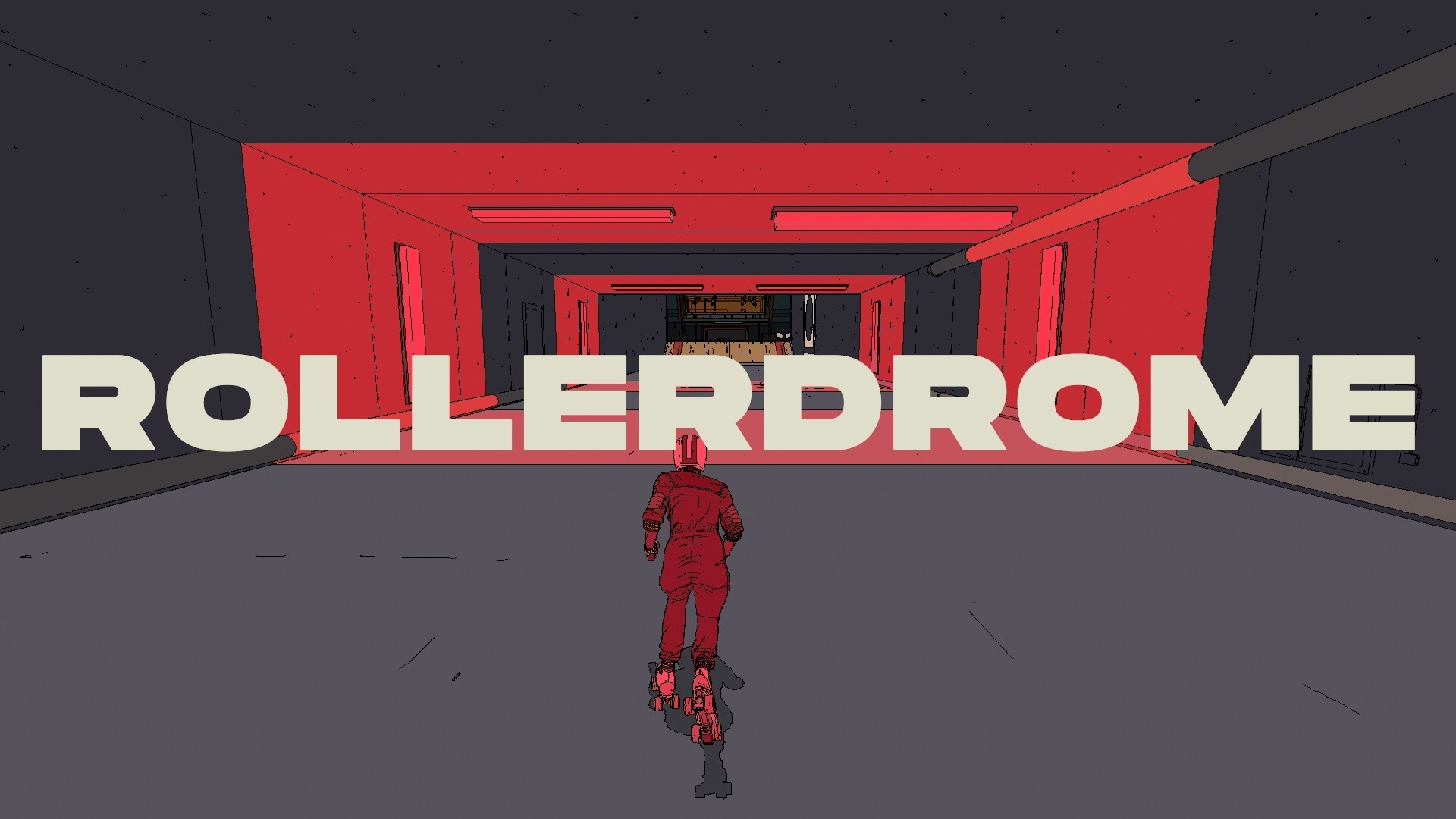 Rollerdrome is the random fantasy that every 90s kid had every occasional afternoon. Roller skates and firearms? Check. Demolition Derby meets the X Games? Check. Matchbox 20s’ music video for ‘Disease’ if it had more action than its already impeccable dance routine? This is it. But does it live up to the headcanon that lives in your subconscious? Well, I ventured into the skate party of murder to find out myself.

Not your usual skate party

Rollerdrome is a different kind of beast compared to its bubbly, more kid-friendly older sibling. Yes, you’ll have to pardon me for comparing it to OlliOlli World for the 69th time, because they DID set the bar high when it comes to skating games–or anything involving half-pipes and ramps to be specific.

The basics of chaining combos with tricks are definitely there, but for other reasons which I’ll explain in a bit. There’s also the added objective of fragging everyone else in the arena. Tricks and combos refill your ammo, so if you’re the passive type who does the usual jump and spin every time, you’ll likely get your head caved in.

Looks-wise, the game employs a very minimalistic aesthetic with rough lines and simple palette colors straight out of a comic book. The enemies all wear the usual road warrior/hazmat garb, and it really ties into the theme. You really get that 80s to early 90s vibe that saw the most popular years of rollerskating in general. This also gives lower-end machines a fair enough chance to run the game at higher settings.

The overall aesthetic coupled with the mechanics of skating and shooting mesh together pretty well. For the more adept at doing tricks while having the best aim, some sweet highlight reels await.

All killer, some filler

By ‘filler’, I don’t mean the “Naruto’s Curry of Life” kind, alright? The game would be fast-paced, but kind of bare if there was nothing in-between your do-or-die skate sessions. The game’s story revolves around rising star skater Kara Hassan’s entry into the post-apocalyptic skate tournament, eponymously named, “Rollerdrome.” You start off with the opening stages, then quarter-finals, semis, and then the finals.

In each section of the tournament, you get a bit of exposition through small, first-person POV sections with interactive surroundings. Once you read up a bit on the material, you’ll be able to piece together the reason why all this came to be. Of course, I’ll leave that for y’all to discover on your own.

While few and far between, this does give the game a bit of storyline, linear as it may be. Rollerdrome wasn’t just some happenstance of skate murder, but something more nefarious at its core.

Cranking the pain to the max

Now, here’s where we talk about what’s extremely good–and probably a bit troublesome for scrubs like myself.

Gameplay-wise, I have nothing bad to say about Rollerdrome. The gameplay is pretty damn smooth, and landing combos coupled with trick shots are simple and satisfying. The feeling you get when you accomplish a chain of jumps, spins, and grabs followed by a well-timed perfect dodge concluded by a kill is rewarding as could be. You really do feel like an acrobatic assassin on wheels. Did I mention there’s bullet time? There’s bullet time. 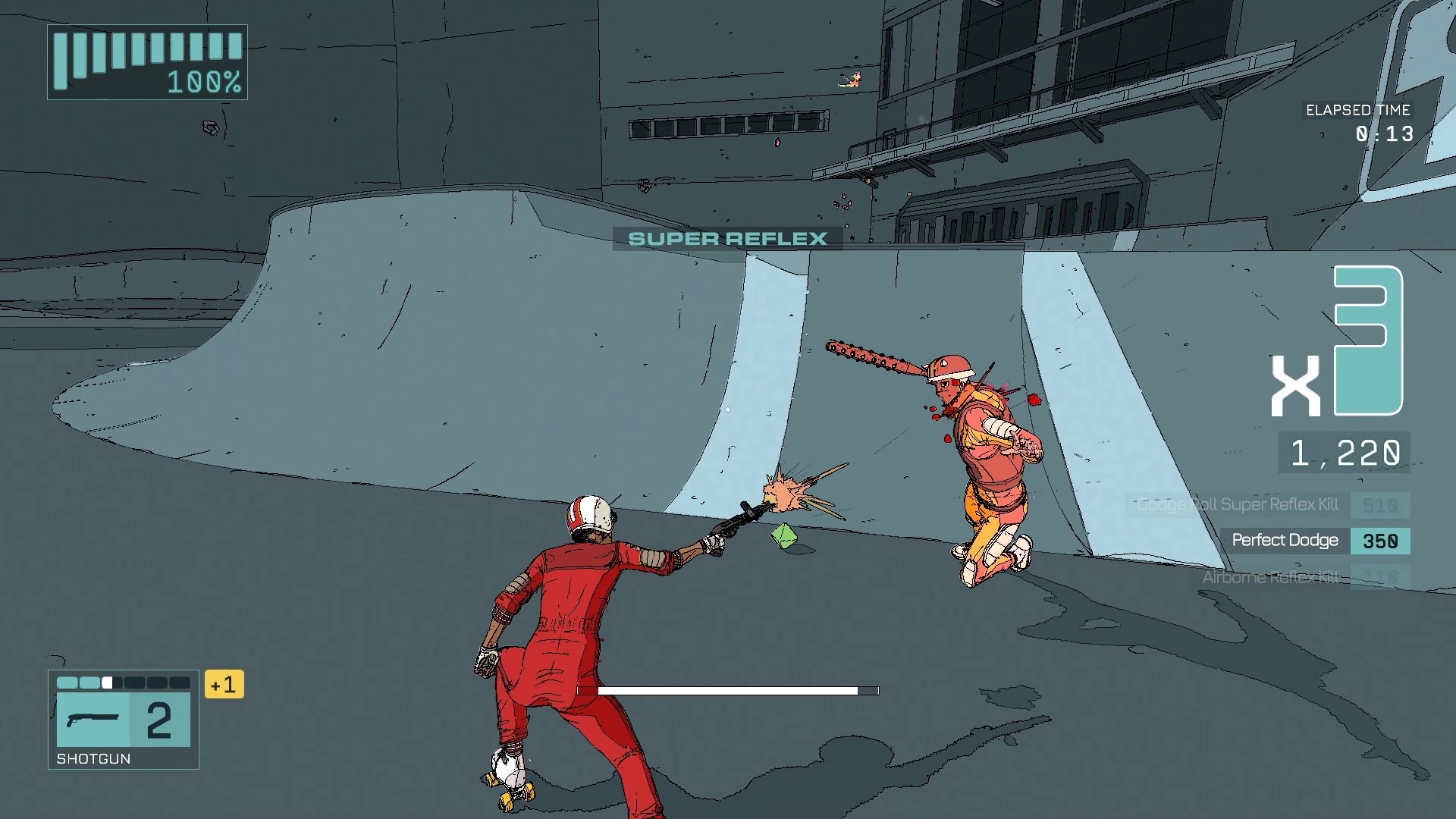 This is a double-edged sword, though. Mash the wrong buttons and you’re pretty much screwed. Timing and button combinations pretty much make up the backbone of your victory–or survival through each round. Falling off the arena or skating out of bounds will respawn you, but take away a bit of your health. A poorly-timed jump or misdirected grind will often see you careening into oblivion or face-checking a missile. The dodging in-game is simple enough, but having to juggle everything else could make you easily forget. 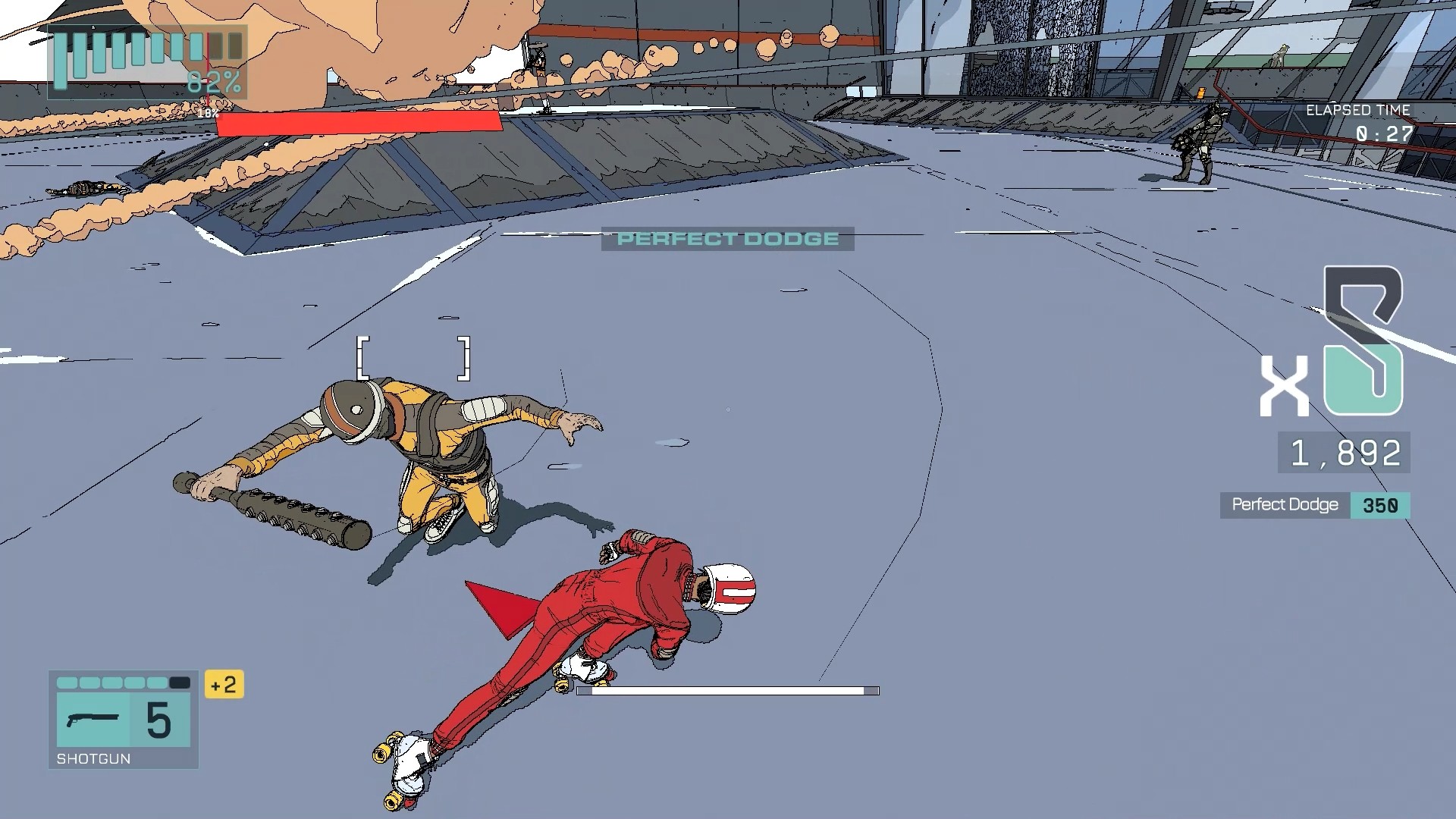 The learning curb is a tad steep, and the difficulty quickly ramps up towards the semi-finals. Enemies get stronger, have more abilities, and soon fill up the arena. Admittedly, I’ve yet to even finish the last parts of the campaign, just because of the difficulty–and because I suck. You’ll be hard-pressed to practice a whole lot during the opening and quarter-final stages if you expect to survive until the endgame. Also, regardless of how good you are with a mouse and keyboard, there are just some things done easier on a controller. By things, I mean most of the game. They do mention it at the beginning, so you will have a fair enough warning.

Still, in spite of the overall challenge, the fun you’ll have while practicing shoot-skating is absolute eye candy. You won’t even notice the time.

Now, before you strap on those skates

I think it’s worth saying that this game won’t be for absolutely everyone. I’d go as far as to say it’s mandatory to ‘git gud’ in order to explore anything beyond the opening stages. If you’re a casual, then this ain’t for you. The “Out For Blood” game mode requires you to finish the campaign, and you don’t wanna know how many completed challenges that require.

One could argue that this is due to the limited stages, but having full access to all the arenas from the get-go would’ve been nice. Players can find out how bad they are at the game on their own. Given how the game was developed, it would still be an overall fun experience, even as a rude awakening. 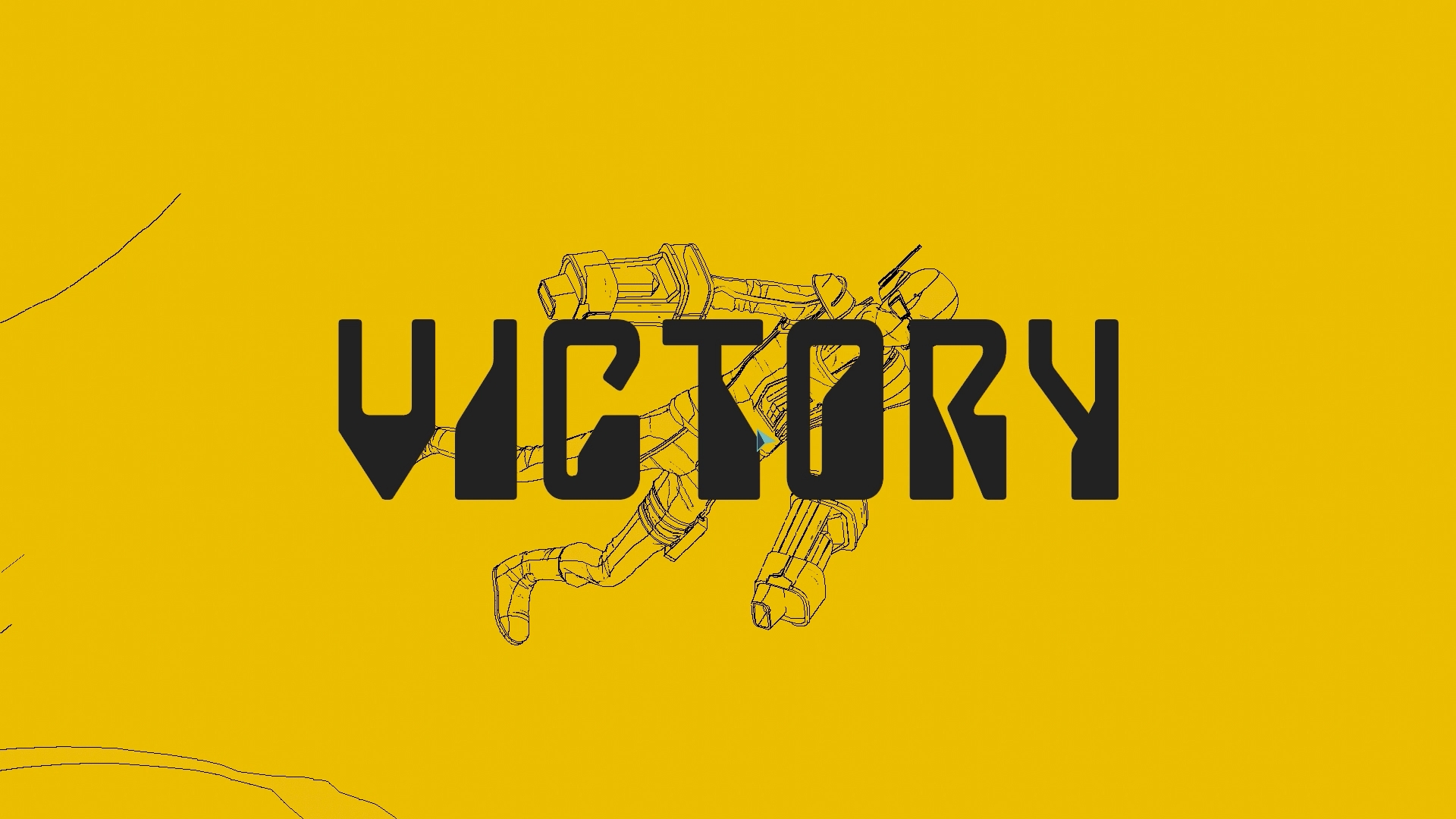 Roll7 has an affinity for anything involving skates, and they’re pretty good at turning it into a game. It’s no OlliOlli World, but it’s a nice deviation from their usual theme that doesn’t stray too far from what they’re known for–and I think that’s a good thing.

If you want a challenging, yet casual-friendly game, pick up OlliOlli World and its VOID Riders DLC. If you’re a completionist with superb gamer skills who refuses to play anything easy, then you’ll absolutely love this. As for me, I enjoyed it for what it is. It’s a nice nostalgia trip with good music, smooth gameplay, and a refreshing concept. Rollerdrome is good, and it kind of makes me WANT to get good, especially for when the full game comes out.

Rollerdrome will be available on August 16 on the PS4, PS5, and PC via Steam.

This preview was made using a game code for PC provided by the publisher.