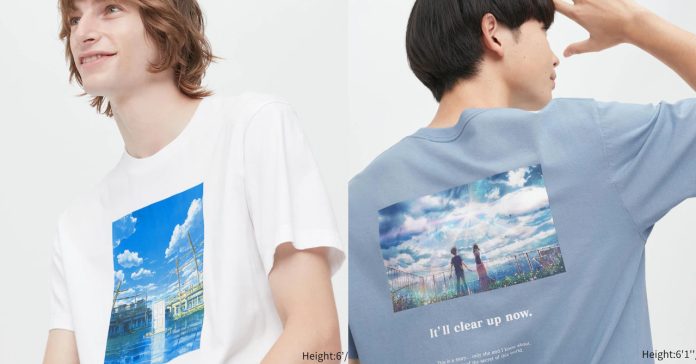 After its recent reveal, the new Uniqlo Makoto Shinkai graphic tee collection is confirmed to release in the Philippines this November.

This isn’t the first time that the Japanese clothing giant teamed up with the renowned anime director as they first linked for a UT collection back in 2019.

Now, this new collection once again features four graphic tees with prints inspired by three of Shinkai’s anime films, including his upcoming movie, Suzume no Tojimari.

The first t-shirt is a navy tee with a print taken from Your Name, Shinkai’s 2016 mega hit anime film.

Next is a light blue t-shirt with a print of Weathering With You’s iconic scene on the back. This film is Shinkai’s follow-up to Your Name, and it was released in cinemas in 2019.

The last two t-shirts feature designs based on his upcoming film, Suzume no Tojimari. The first one features a small cat and graphic at the front and a chair print on the back. The significance of these two will be explained when you see the film.

Finally, we have a white t-shirt with a graphic at the front taken from the film’s first key visual.

Uniqlo confirmed the release of the Makoto Shinkai collection in the Philippines via its official website. There, it’s revealed that the lineup will be released in the PH on November 14, 2022. Given the standard UT pricing, it’s expected that each tee will be priced at PHP 790.