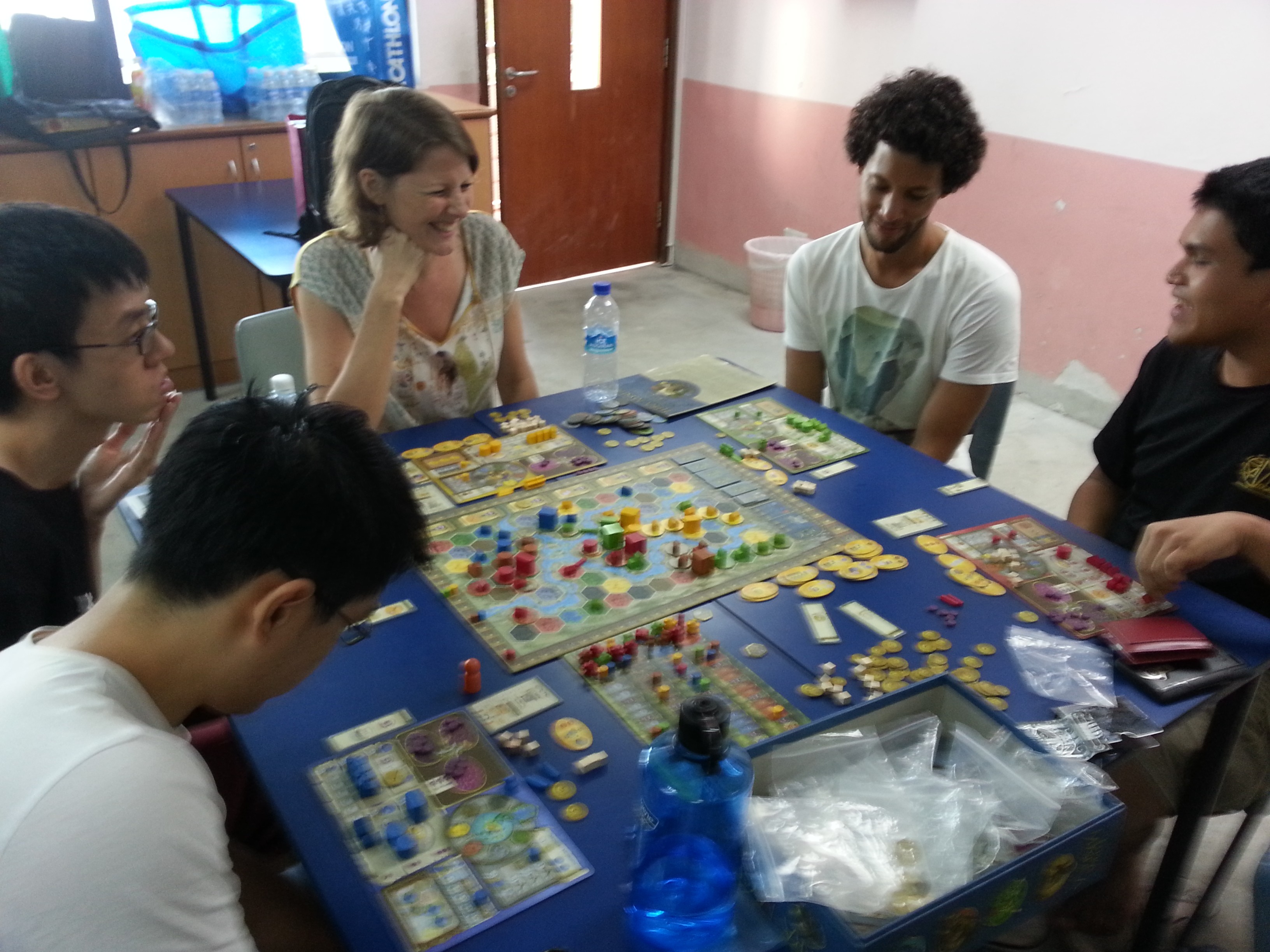 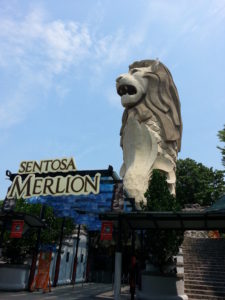 Singapore – Time really flies when you’re having fun isn’t it? In my case it went at a blazing fast pace during my trip to Singapore last May, as most of my 20-day stay there was about gaming (check out Casual Connect Asia 2016) and FOOD! But I’m not here to talk about all the Chicken Rice I devoured in multiple Hawker areas, or my favorite Fish Ball Noodle Soup! I’m here to talk about the other side of gaming… One that I’m dearly passionate about… Yes I’m talking about board games yet again! So those still with me please allow me to indulge. 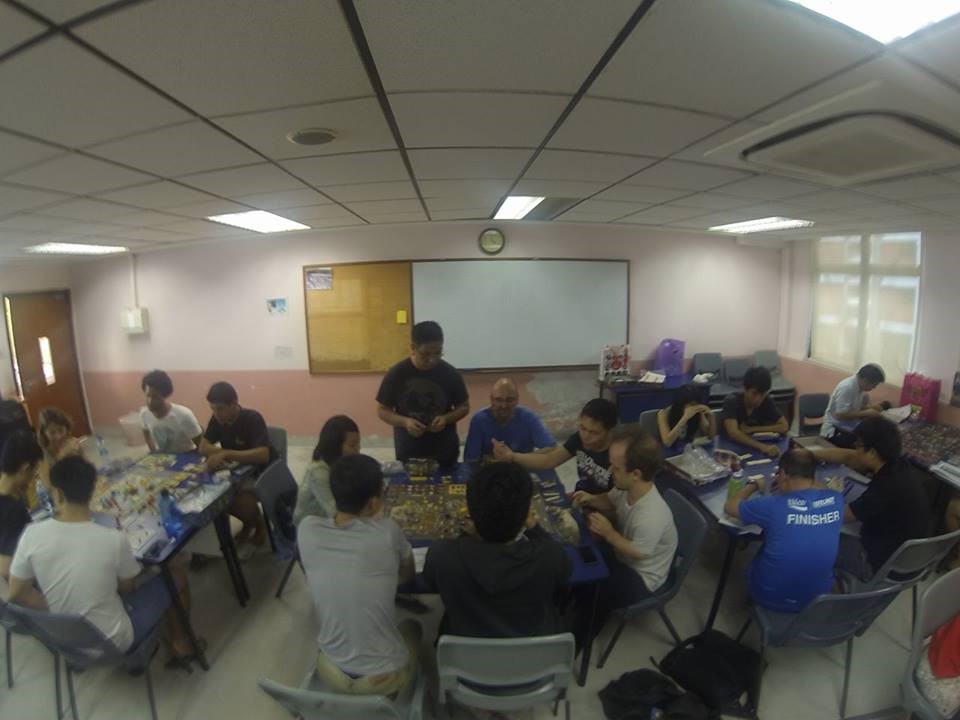 Last Sunday May 22, 2016 I was invited by The Singapore Open Gaming Group to join them in one of their gaming sessions. Being one that is always up for a game or two (or three or four, maybe five), I excitedly agreed.

The place is near Ang Mo Kio MRT station, which is a few stops (and line colors) from the area I stayed which was in Hougang. Being familiar with the area it was just a 20-min trip. I dragged my friend Jorek along, who was just 2 stations away. Let me tell you that he is uninitiated in the realm of tangible cardboard gaming, little did he know that he was in for a treat from his usual suspects “Monopoly” and “Snakes and Ladders.”

When we went to the place, we were greeted by the event organizer Wong Koi Hin .  He told me a bit of info about their group, that they we’re consistent in holding gaming sessions every Sunday starting at 1pm onwards. Not only we’re they consistent, but they are also some of the most approachable bunch of gamers I have met. 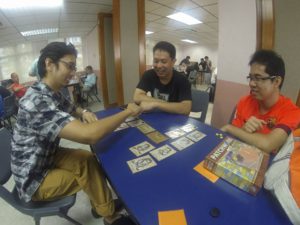 In no time, after putting my games at the table I was approached by 2 patrons at the event, wanting to try out Council of Verona – A game set in the world of Romeo and Juliet where the players manipulate prominent people in the city; who to place in the “Council” and who to “Exile.” At its heart, the game revolves around card-drafting and playing, with some interesting take that and bluffing elements. 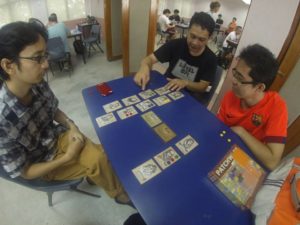 Now, I’ve always said that Council of Verona is the better “Love Letter” for me, as it has much more of a meat into it. But unlike the latter, it’s a bit harder to teach, especially to newcomers. My formula in this setting is always to introduce the theme and its setting. What to do in your turn (In this case, play one card and/or place an influence disc) and what the cards do… This is pretty easy since some of them have similar abilities because of rivaling families (Montagues and Capulets).

After their first turn everyone had a good grasp on the gameplay. And round after round the game became much more cutthroat after knowing what cards to draft. In the end I lost by a few points due to a last-minute switch of influence discs, it was really an exciting moment since it was a choice of what disc to switch at the right moment, since they are all “facedown” you don’t really know what’s underneath it. Well someone believed in the “heart of the cards,” or in this case “heart of the tokens.” That move gave me a 5 point swing and cost me the game. 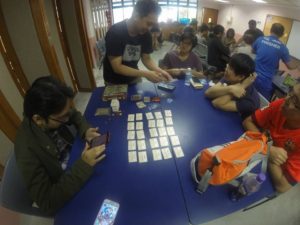 The next game was Codenames. That Vlaada Chvatil game that doesn’t feel like a Vlaada Chvatil game. Good thing some of the players in the table already tried the game, so it was a bit easier for me to teach. Codenames is a team-versus-team game where one member is designated as the “Spymaster,” who basically gives out clues to his or her teammates. The main goal of the game is to guess the words (codenames) that belong to their team.

In a team’s turn, the spymasters gives out a one word clue and a number, which signifies the number of times his or her teammates can guess on the grid. Then one at a time, his teammates has to guess or point to one of the cards, hoping that it’s theirs… 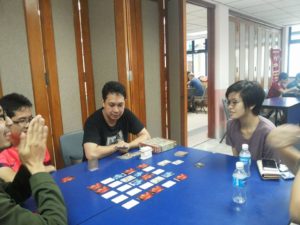 But it’s not that easy because other stuff might happen though! They could unknowingly pick the bystander or even their opponent’s card, instantly ending the turn with a possibility of scoring for the other team or even worse when you picked the Assassin card, which is an instant-defeat for the team who chose it. The trick in this game is to carefully pick the words with surgical precision and linking them into one clue, being mindful of similar-themed cards that are not included in their teams color, because the team my accidentally select it. 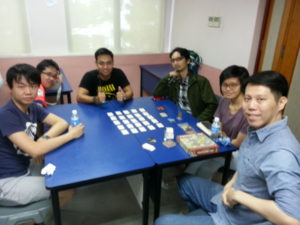 The game went to a very close and deciding 3rd match where any team could win. In the end our group won because the opposing team picked the assassin card, so yey! 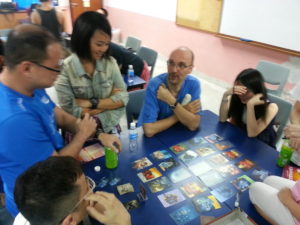 You should really try this game out. It’s a strong contender for the Spiel Des Jahres and I’m very confident that it’s a shoe-in for top honors. As an added tip for this game, you can replace the word cards with Dixit cards. It’s a good variant that you should definitely check when you have both games. 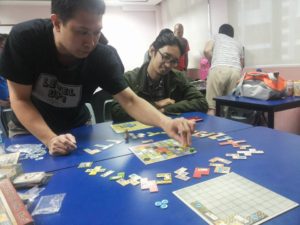 Speaking of variants, another game we tried is an impromptu 4-player variant of Patchwork. Yeah I know it’s a 2-player game… But heck we made it work as a tag-team quilting match! Now that’s something I can pitch for the WWE! The game went down the (stitching) line and got a tight-knit score of 7 to 6. For more info on the game you can check out Patchwork here. 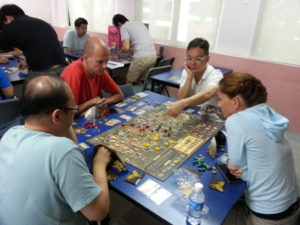 Here are some of the pics from that game session. Game of Thrones is in full swing so it’s no surprise that there were 2 games of it on neighboring tables. 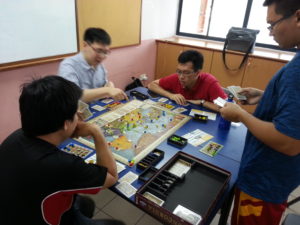 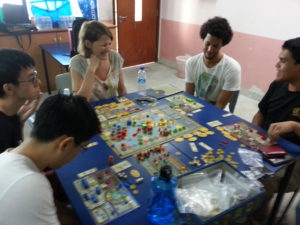 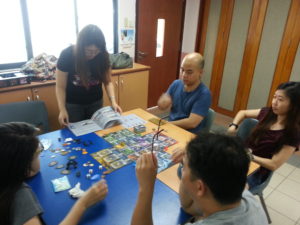 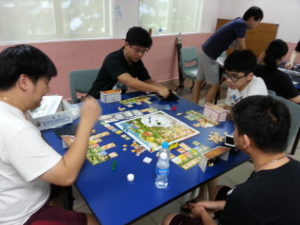 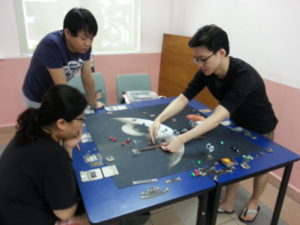 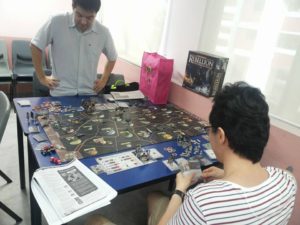 For more info about the group you can click here for Singapore Open Gaming’s Facebook page. Send them a message when you’re in the area! There are always welcome to anyone who wants to  game.

Well that’s about it! Where will UnGeek end up next? See you guys in the next installment of On the Table! Thanks for reading.