Globe Imperium Pro Team readies itself for one helluva Rampage 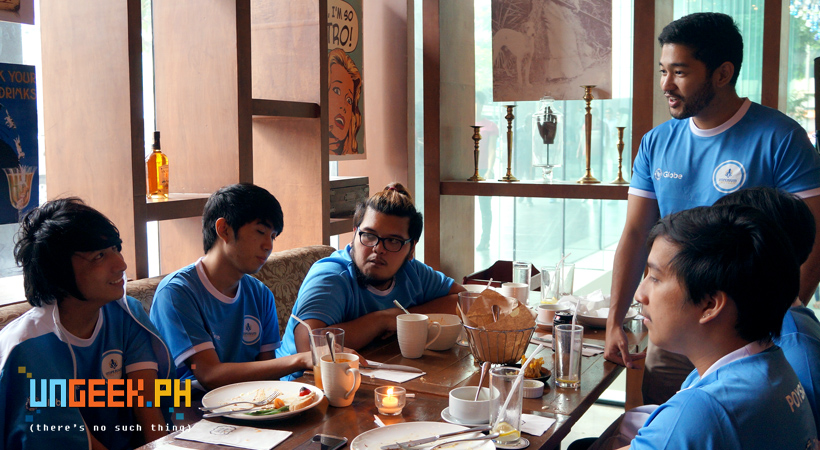 At first glance, the Globe Imperium Pro Team – a finalist for the main brawl at Rampage 2016— seem like a group that has been together since they were in Grade School. During our exclusive lunch interview with them, the team is seen cajoling at each other’s’ orders and making light of the fact that they have one of the biggest fights of their career later that afternoon.

It’s surprising to know that this roster was formally gelled just a couple of months back and, more surprisingly, that the corporate support that the team now enjoys only solidified even more recently. This isn’t the first time that Globe backed a LoL (League of Legend) eSports Pro League. Last year, Globe lent its support to Mineski during Rampage 2015 with Mineski winning the cup. Will Globe have another winner on its hands this year? We spoke with the team to get an idea of what’s going on in their heads before the big match with Acclaim Empire.

UngeekPH (UG): How long have you guys been playing as Imperium Pro Team?

Raphael Gancayco (Team Manager): The team only formally formed around 5-6 months back but some of them have been playing longer considering Suez, JLC, and Poysanity came from Wargods.

Raph: Right, so that’s why the synergy is faster this time around. We didn’t have to build it from the ground up.

Suez: And dahil po doon naging mas comfortable lang yung laro na mas makakapagfocus ka sa kailangan mong gawin. (And because of that, the team just became more comfortable playing with each other that you can really focus on what needs to be done.)

UG: If given the chance that you are able to represent the Philippines in the International scene, is there a team that you wish to compete against with?

UG: So these guys are the Team to Beat?

Raph: Yeah, because in our last few games against BKT it all took place online so there’s an aspect of advantage for BKT that we don’t have ( games are played on the South East Asia Servers which are closest in Bangkok hence server lags and minor issues are less frequent). We want to play them again on a level playing field because last GPL, what people might forget is that we almost beat them so we just want to go there, play them on a level playing field and (hopefully) win. Or ask Light. Light who do you want, or which team would you want to compete with?

UG: Talk us through the emotions during a high stakes game, what goes through your mind? Kinakabahan pa ba kayo? (Do you guys still feel nervous?)

JLC then proceeds to somewhat point towards H4T3 before the group burst into laughter once again.

Raph proceeds to explain how the group all shares and sleeps in one gaming house where they practically train (or play) almost the entire day away. They follow a rigorous (but fun!) routine of play-eat-train. This goes on up to the wee hours of the night which pays off in terms of play synchronization and strategy.

The energy and synergy that the team had is wonderful to see and it’s great that these guys are getting the support that an eSports team should be getting. We asked Jake San Diego, Head of Games for the Consumer Business Group, on Globe’s involvement on the future of eSports, and he mentioned that they are definitely looking into getting involved more and more in the eSports scene starting with their effort with IPT. While they are currently only supporting the LoL team of IPT, they are studying other eSport-related events, communities and teams that they can potentially lend their support to and are exploring a continued partnership with IPT as a whole as well.

With more and more companies lending a welcoming hand in nurturing eSport teams here in the country, eSports, as a local industry, is shaping up to become a new pillar in sportsmanship and competition here in the country. As Jake puts it, we’re far from the level of how eSports is seen and revered in other countries but we’re definitely in the right direction. “With the movements and major events (ESL One, Manila Major, Rampage2016) happening this year alone, I feel that 2016 is the Renaissance Year for eSports,” Jake quips.

To that, we wholeheartedly agree!