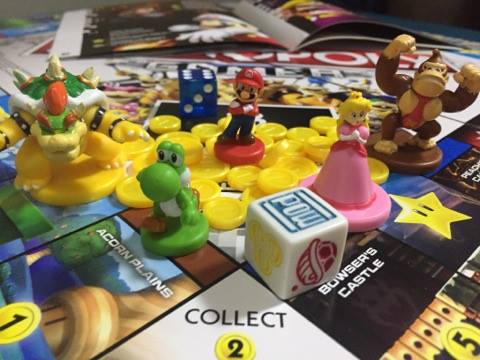 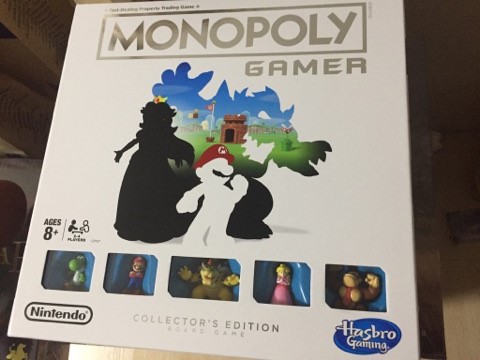 Hey paisanos wait! Don’t leave! Do not pass go! Before you go to a different warp zone, you might want to stick around and check our review on this game… Because this version of Monopoly might change your mind and actually have a place in your shelf. 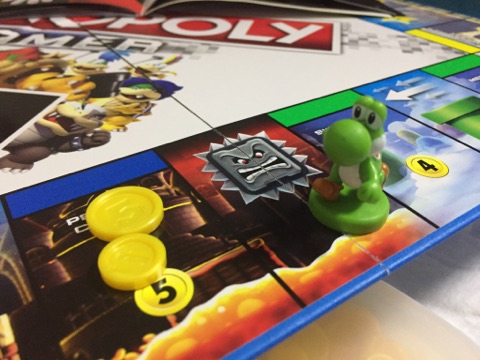 But the similarities stop there.

This “Gamer” version actually packs in a lot of neat new features that streamline the game. Not only did they effectively strip down all the stuff people complain about Vanilla Monopoly (there are no more houses and hotels), they also made the play length much more reasonable! Let me make a breakdown on all of the good stuff that might make this game worth your while… In alphabetical order!

First things first, I won’t go into detail on the specific rules of the original monopoly, as I’m expecting most of you have a general idea already. In this review I am indicating every noteworthy change that might sway you into giving this classic another chance. 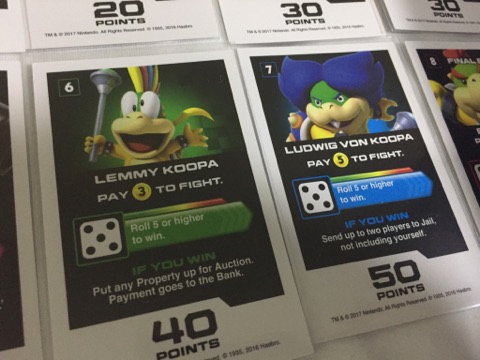 Monopoly actually has a “game over” people! After playing a few games, I could safely say that good playtime hovers around the 45-60 minute mark, which is a huge jump from its older brother. How did they manage to do that? With the Boss Cards!

Whenever you pass the Go! space, you now have the option to flip the top card of the boss deck and attempt to fight a big (little) Koopa baddie. You first pay the cost indicated on the card and roll the numbered die, if it equals or exceeds the value written then you beat it! If not, the next player who passes “go” Gets a shot.

What’s so great about these cards? Aside from making the game length finite like mentioned, they also provide those much needed points for you to win the game. Not only that, they also give a one-shot temporary power that you can use to screw your opponents! I won’t spoil much but one of them lets you pick one opponent to go to Jail! Haha! 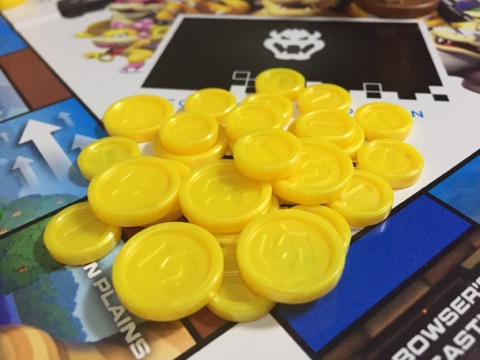 I don’t know about you guys, but when I’m playing games that have currency, I really prefer coins over paper money (the only exception to this is when I’m playing Firefly, their paper is awesome). Gone here are the many denominations of cash made of thin and flimsy, instead you get coins in 1’s and 5’s. Simple and effective!

Pro Tip: Download a soundboard for the game that has those “coin” sound effects and watch your friends laugh in amusement when someone gains or loses money.

In the original Monopoly you get 2 dice, which primarily determines movement. Here you get only 1 movement die, what happened to the other you say? Well it got a complete overhaul in the form of a power-up die!

During your turn you roll both as usual, but aside from moving, you now have the option to trigger first the action die to do a bit of “take-that” to your opponent, mostly involving taking or dropping coins in the space – to which you can then  move and pick it up! 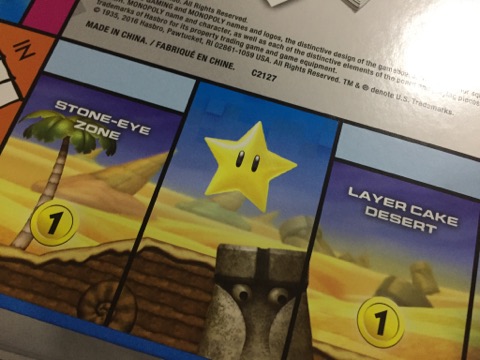 Added to the board are Power-Up spaces in which your character can perform a special skill* (Star Space) or warp to a different area on the board (Pipes). There’s also a “Thwomp” space that makes you drop 2 coins.

*More on special skills below. 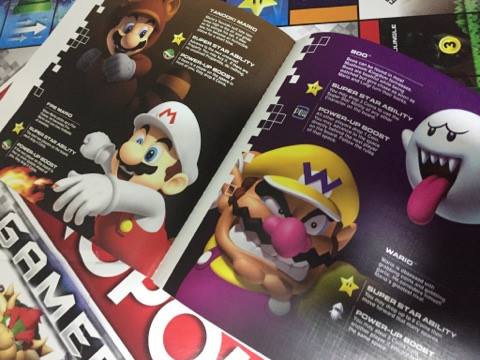 I’ve read a lot of game manuals. Some good and some, more often than not are just bad. This is not the case in Monopoly Gamer. Not only is the manual pure eye-candy that is well-constructed and presented very cleanly… The actual book is made of a cloth-like/plasticky (Yes I know it’s not a word) material that something I haven’t felt before in my boardgaming life. 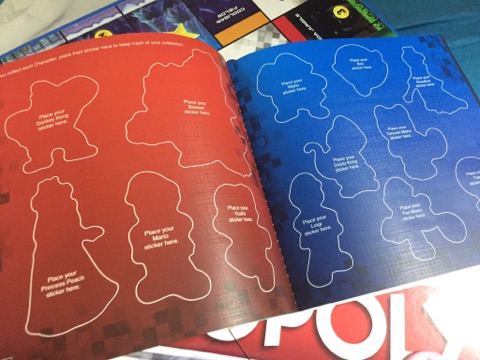 They even devoted a “sticker collection” page to which you can stick your characters in appropriate placeholders. That doesn’t get more 90’s Lisa Frank than that! 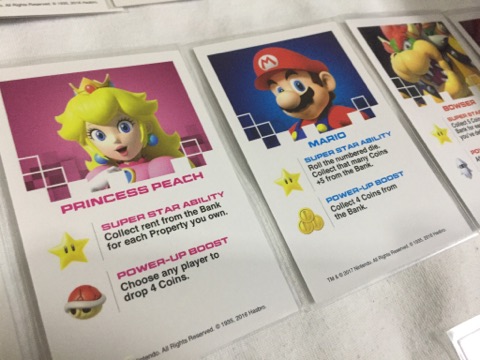 Perhaps my most favorite feature the game… Every figure has its own unique power now (2 powers actually!). And surprisingly it fits! Mario is effective at collecting coins, Donkey Kong slams the ground that makes other players drop money, and Yoshi is effective at picking them up. You get the idea!

Not only has this significantly increase the dynamic and replay value, it gave the game more interaction and fun between players. Yes you are still at the mercy of the dice, but at least you know that you have something up your sleeve! 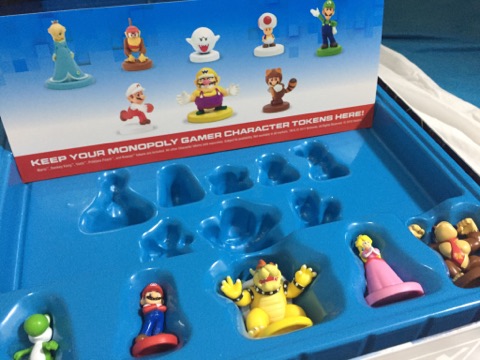 It only gets better when you purchase “Power Packs” that provide more characters and abilities. The DLC aspect might throw off some gamers, but they come in cheap boosters that I really don’t mind… Provided I can get my hands on it in the first place haha! 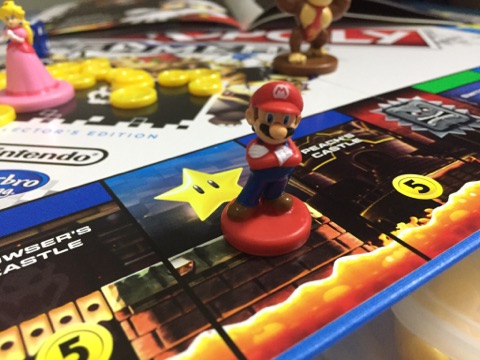 If you come into the game fully expecting everything I mentioned, there is loads of random light-hearted fun to be had here! Overall, for me the game is actually good, considering this is a franchise that is mostly ignored nowadays by the more discerning gamer.

Like it or not, Monopoly Gamer just made regular Monopoly relevant again.

- Advertisement -
Previous article[WATCH]: A Sneak Peek of the “Spider-Man : Homecoming” Early Minutes of the Movie, a Film by Peter Parker
Next articleIs the Philippines gearing up to be an OPPO nation?