Could ‘Detroit: Become Human’ be the next great PS Exclusive? Here are 5 reasons why we think it could be! 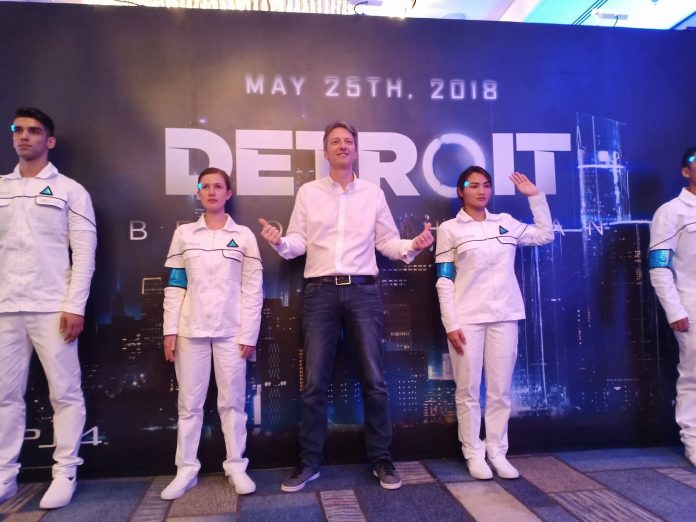 Hot on the heels of the virtually perfect God of War released just last week is another game that took around 6 years in the making. Spawning from a technical demo, Detroit: Become Human is the next big project from Quantic Dream and is also the next Playstation exclusive that we can keep our eye out for. We’ve shown you a preview of Detroit from way back during TGS but it wasn’t only until recently that we got to play what was looking to be the final build of the game. Join us as we talk you through our impressions and what we think are the 5 reasons why Detroit: Become Human could become the next great Playstation exclusive!

A Quantic Dream specialty. In Detroit, human-like androids have become widespread commodities, able to do anything and everything their human masters command them to. It literally FEELS like the future, both visually and thematically, with some skynet – level artificial intelligence thing going on. If you’ve gotten to watch some of them Black Mirror episodes over at Netflix, you know exactly what I’m talking about when I say that having this scenario isn’t too far fetched. You get to control and see the world from 3 different characters – Markus, Connor, and Kara, all of which have their own reasons and motivations for doing what they do. It’s quite interesting that instead of playing as humans, you are thrust into the point of view of these androids that have advanced their AI to the point of emotion and critical thinking.

After such action packed titles like God of War and Farcry 5, it is certainly a welcome change of pace to get to experience an immersive storytelling experience in which Quantic Dream is very well known for. Hey, they didn’t win a BAFTA award in storytelling for nothing!

We got to play a few scenarios and the storyline really shines through the superb writing of the game. While we cannot say how long the immersive story telling will last, at least for the duration that we played (which is quite a lot), we’d have to say that it was a good start and the pace is very balanced. There was enough setup to introduce the main characters of the game but at the same time not too long to bore the audience with a sluggish backstory. There is palpable emotion and making a choice is not as easy to do since you become attached to the characters in such a short span of time, which brings us to…

I am not a completionist by any stretch, not because I can’t but I have very little time to spare. Knowing that Detroit has literally hundreds of choices that can affect the outcome of a scenario is a nightmare for completionists… or is it? Quantic Dream co-CEO and executive producer Guillaume de Fondaumière spilled the beans on Detroit cutting close to around 30 hours for full completion, meaning all scenarios can be found out by around that time. I’ve personally seen and played a number of chapters in the game and am surprised by how quick and easy it is to replay an encounter, as the game gives you a flowchart of the choices you made so that you can easily track your progress and replay the game again going through another route.

Without spoiling anything, it is interesting to note that based on your choices, some of these characters may or may not interact within the game, which just goes to show how much variety there is in the choices you make which warrants a playthrough. Some games change some parts of the ending for the sake of providing an “alternate” ending but in Detroit, the choices you make throughout the game completely changes the track for the future events and allows the need for multiple playthroughs.

I’d have to say that the little inclusion of the flowchart is a wonderful idea and it actually makes me, a non completionist type of gamer, want to go ahead and repeat the game for that Platinum trophy. Some may consider this addition a little bit spoiler-ish but then again, it is your choice whether to use it or not. Playing the game again is actually quite welcome because of the… 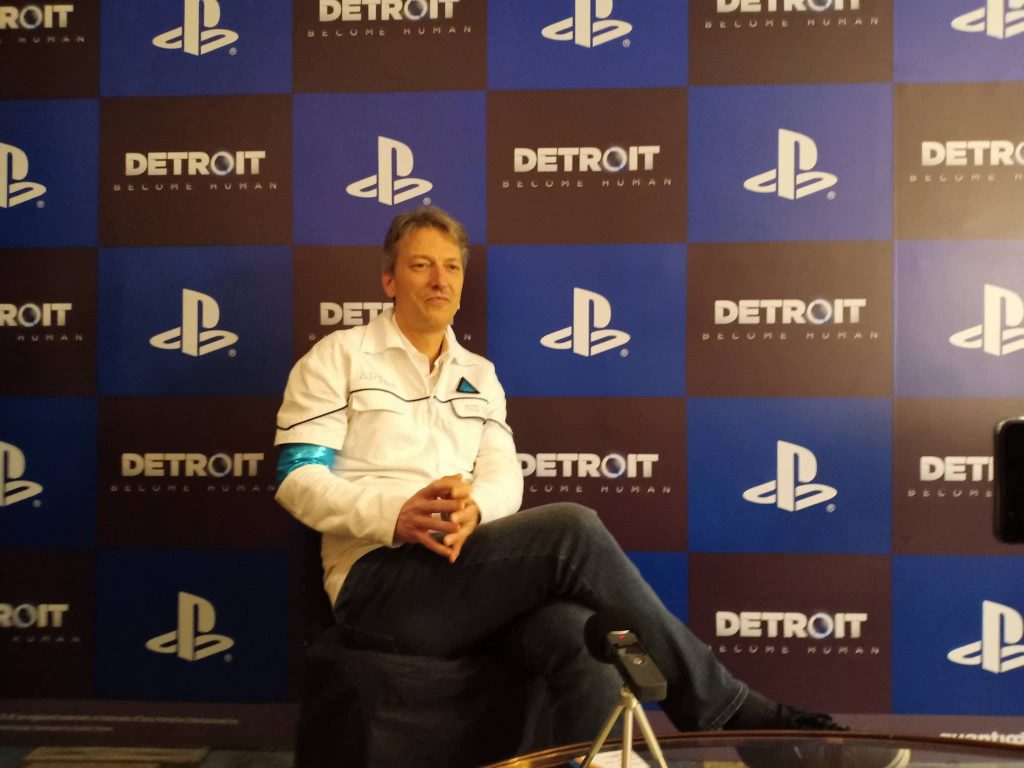 Guillaume continued on to mention that for Detroit, they had to employ the services of 3 superb composers to produce the musical tracks of the game, one for each character. With Markus, Connor, and Kara having distinct personalities, storylines, and challenges to run through, it only made sense to have separate soundtracks for each of them. As Guillaume explains, “To stress Connor’s very cold and mechanical behavior, we chose a primarily electronic soundtrack. For Kara, we wanted a music that would be emotional and moving, underlining her quest for identity, love and empathy. For Markus, we needed a soundtrack that would be epic and represent the grand aspect of his journey.”

The soundtrack is immersive and is highly engaging as you roll through the busy streets or as you look out to solve a case. For a narrative masterpiece that Detroit is, half the game is how good the music is and trust us, this game is meant to be heard as much as it was meant to be played. With the soundtrack to the game being something that is easy to listen to, the game as well is easy to…

Pick up and play

Detroit isn’t an action or adventure game by any means if you compare it to titles such as God of War or Far Cry 5 or the like, and that’s not necessarily a bad thing. We loved how easy it is to pick up a controller and dive into the game, even without exploring the settings menu or without any drawn out tutorials. Actions are explained properly and you can see what else you need to do with the visual cues on screen.

During an investigation, you will be tasked to recreate some scenes to pick up possible information that you normally wouldn’t have discovered and this leads to possibly more choices and branches that was previously locked. For example, if you find all clues, you will enter the final encounter with all dialog paths unlocked as well as a higher success rating that you will get the outcome you want. If you breezed through the clues and didn’t bother to check your surroundings, then the chances of you getting caught or failing the ensuing conversations due to locked dialog choices will be higher. It’s not an original mechanic, but the implementation is effective and is integral to the system of Detroit. 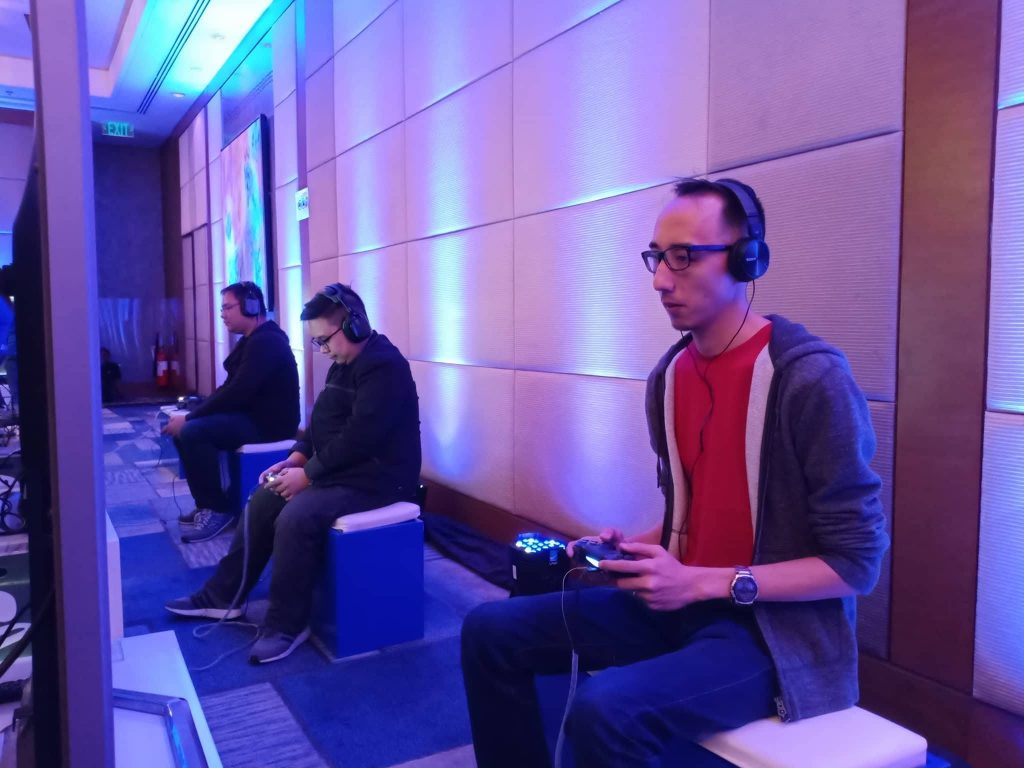 I do have a small gripe about the controls and I found it to be a bit sluggish and not as responsive as I thought it would be. Remember Heavy Rain? Yeah, exactly like that. It’s like the character is walking in a puddle of mud and sometimes the camera gets stuck in unwanted angles, making some transitions abrupt and disorienting. If you can look past these small quirks, you should be able to sit back and enjoy the game for what it is.

Detroit is a very easy game to get immersed in, and is really not a turn off even for people looking for an overall great game to play. If you’re looking for a challenge ala Dark Souls or Bloodborne, this probably isn’t the type of game you’d want but whether you are a skill based gamer or just someone who enjoys a quality product, you don’t have to look any further because the game is a…

The game is gorgeous and will realize it’s full potential when played on a Playstation 4 Pro. Even the slightest facial details add to the overall gameplay, being a narrative based title. Heavy Rain was a triumph in the facial expressions category, and Detroit follows suit. With great writing and storytelling, you get to feel for the characters more and the stellar creative direction taken by the team only amplifies the connection between the player and the world.

I am rather disappointed though that the game cannot run at a full 4k/60fps even on the PS4 Pro but knowing Quantic Dream, a company that tries to push the capabilities everytime, it was probably a smart choice for them to scale it down a bit to provide a better experience overall.

If you missed the chance to get to play Detroit over the past weekend, don’t fret as Detroit: Become Human will be May 25, 2018 and will have a Standard edition that will cost 2799 pesos. For the collectors out there, the local release will come in a collector’s edition as well that’ll cost 3199 pesos and includes an exclusive art book!