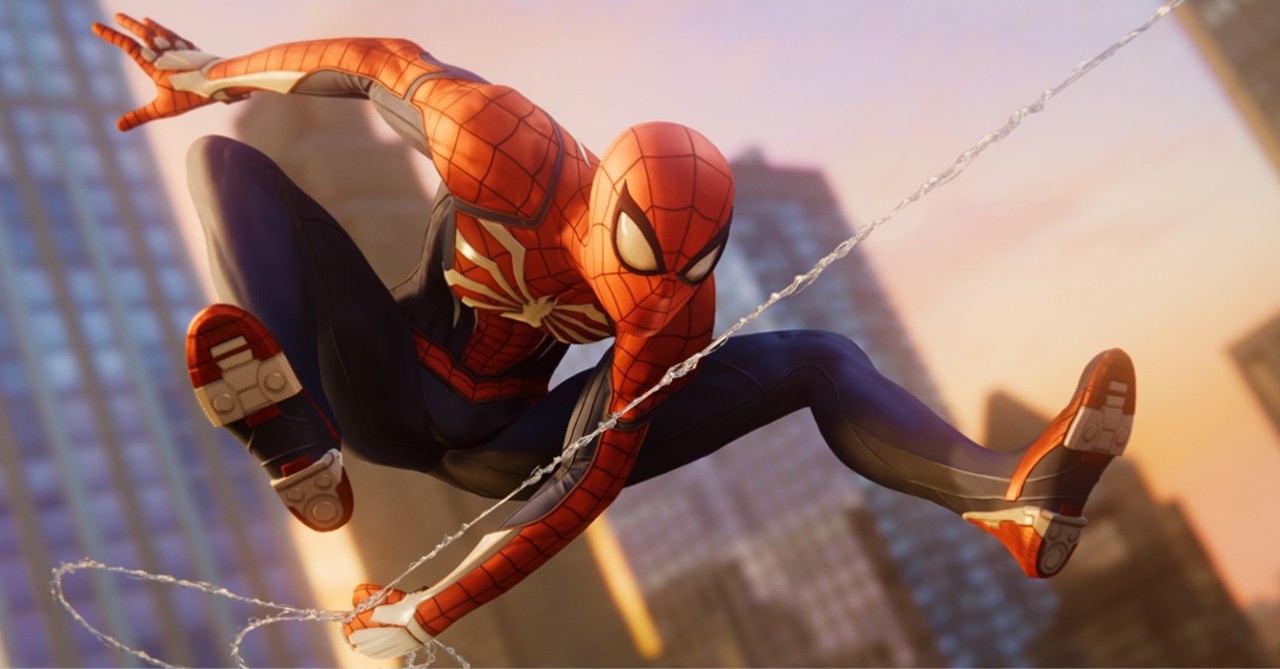 Marvel’s Spider-Man is one of the most hyped games of the year, judging from both the massive amount of trailers that PlayStation has released and the recent ‘puddle’ drama on Reddit. It’s no surprise, given that Spider-Man is still the most popular Marvel superhero, and that the game promises to be the definitive Spider-Man title ever released.

Judging from all the gameplay videos that PlayStation has released so far, Marvel’s Spider-Man is shaping up to be one helluva fun game. In my short time testing the game out last month, I came away impressed. I found that the swinging in-game was smooth and satisfying; general combat meanwhile was fast-paced and intense.

My first impressions of the game was highly positive. Though did my thoughts remain unchanged after a full playthrough of the game? Here’s UnGeek’s full non-spoiler review of Marvel’s Spider-Man!

The Story is a Spider-Man ‘Greatest Hits’ Collection

During the PlayStation Showcase at E3 2018, it was revealed that the Sinister Six is making an appearance in the game. In more trailers leading up to its release, characters such as Miles Morales and Silver Sable were highlighted as well. Adding all those characters to Spider-Man mainstays such as Aunt May, Norman Osborn, and Mary Jane Watson, I was concerned that the game had way too many characters which could result in a lackluster story. 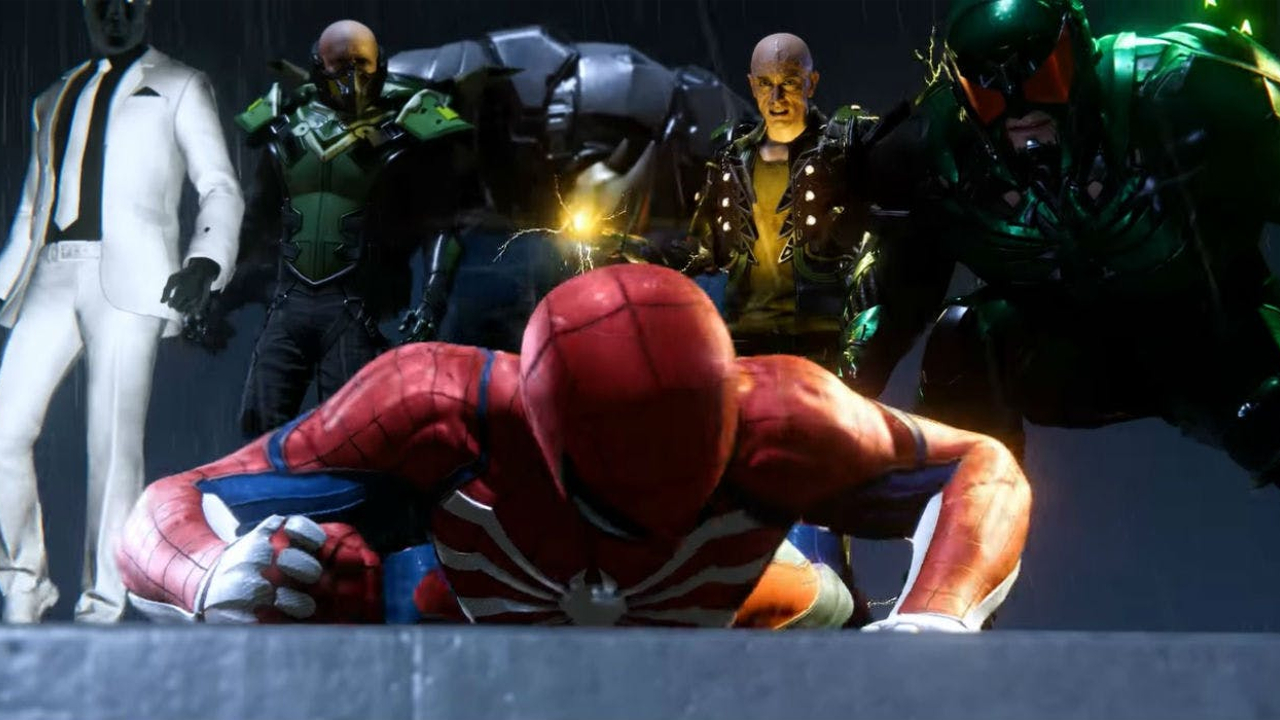 As the credits rolled, I breathed a sigh of relief. Sure, some characters got the short end of the stick (in that they weren’t given much time to shine), but for the most part Insomniac Games was able to juggle all of these characters amazingly well. They borrowed from a number of comic book storylines, and were able to craft a story that’s both heartfelt and engaging.

What’s great about the game’s story is that not everything is black-and-white (there’s a Mister Negative joke there somewhere). Most, if not all of the villains had believable or even tragic motivations, making them far from comically evil. Take Kingpin for example; his arrest early in the game lead to a power vacuum which allowed Mister Negative to rise. While he’s the overlord of NYC’s biggest crime syndicate, he did keep other gangs in check, and in Spider-Man’s own words ‘he cares about New York in his own way’.

Aside from the baddies, Spider-Man/Peter Parker and the rest of his supporting cast are all faithful to spirit of their comic book counterparts, but with a few twists. Peter this time is working as a scientist, while MJ is a reporter at the Daily Bugle. Even though their circumstances are different (this game does take place eight years into Peter’s tenure as Spidey), the characters still feel familiar. 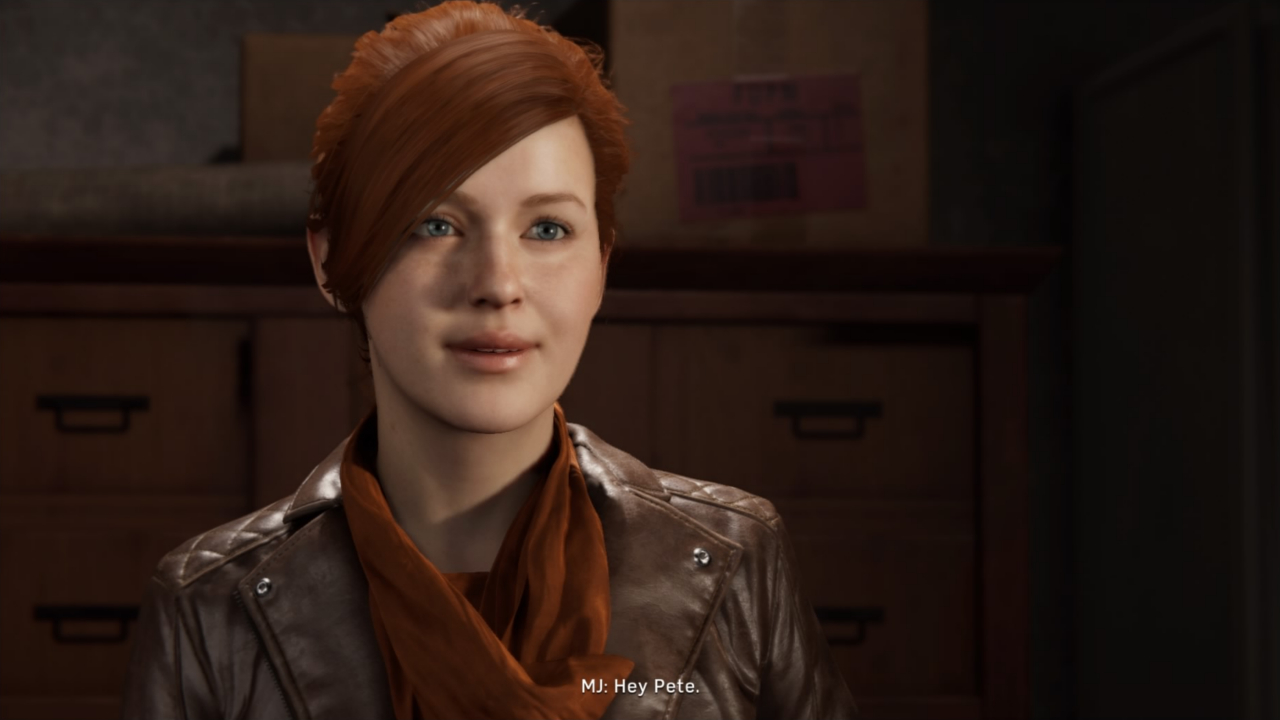 Another good thing about the story is that it is well-crafted. From the first moments to the final boss fight, every part of the plot made sense. While it does feel complete for the most part, there are still some loose ends left over, most of which are setups either for future DLC or for a sequel.

Overall, Marvel’s Spider-Man had a good story that’s sure to satisfy both fans and non-fans of the friendly neighborhood superhero. The only real knock towards it is that the story plays it safe, meaning it’s not exactly a revolutionary Spider-Man tale.

Combat is fun, but doesn’t bring anything new to the table

Another aspect wherein the game isn’t revolutionary is combat, but that’s not to say combat is bad. Beating up baddies as Spider-Man is still fun (as I’ve mentioned in my first impressions), and you can’t just button mash your way to victory as there are often a ton of mobs that will jump at a chance to swarm Spidey. 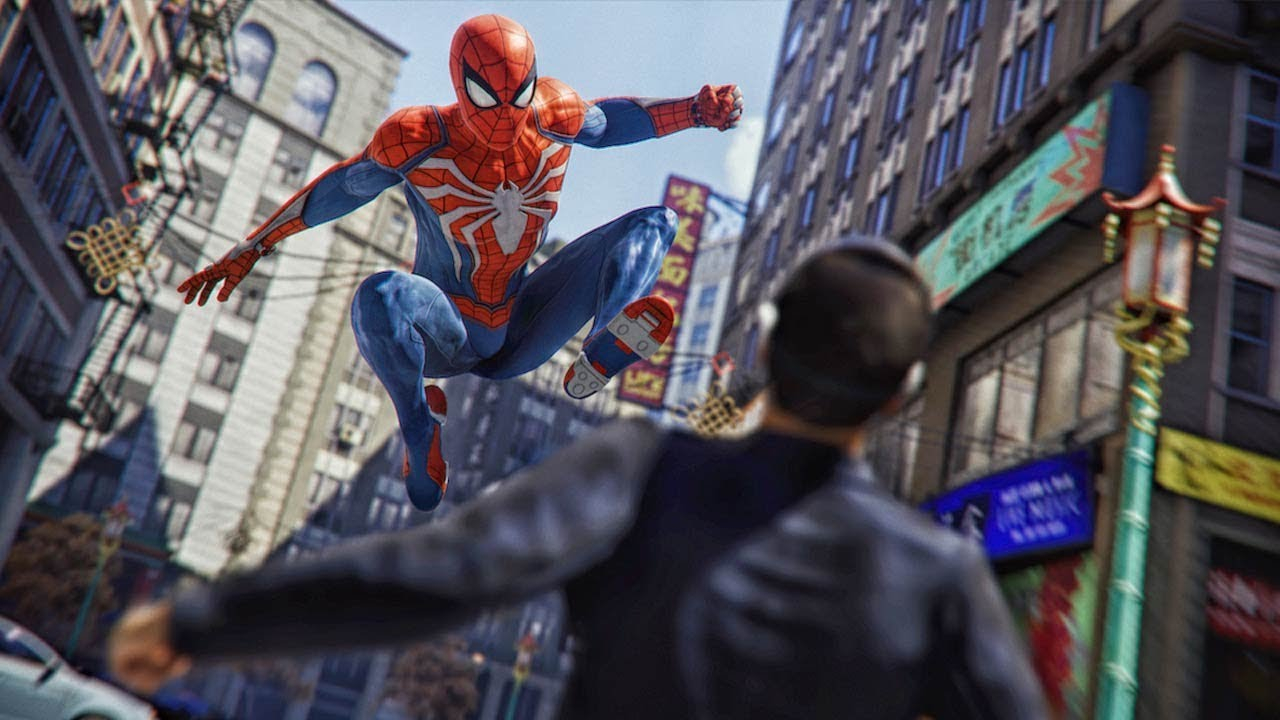 General combat goes like this: press Square to attack, Circle to dodge, Triangle to zip towards an enemy, and X to jump. From there, you’ll be able to unlock skills that’ll let you string together ground and aerial combos. There’s also the Focus Bar which fills up when you attack enemies; you can use the focus bar to heal yourself or use it for a finisher (by pressing Triangle + Circle) to one-shot an enemy. Then there are gadgets with different types of web shooters for crowd control and stealth options, as well as suit powers which you can use in a pinch.

All these options make for what seems to be complex combat system, though it’s actually fairly easy to pick up. Compared to other titles, there’s no steep learning curve with this game; but that’s actually one of its drawbacks. Because it’s easy to get a hang of, it just lacks that bit of depth. Sure there are a lot of skills and gadgets, and some enemies have particular weaknesses that you must exploit, but most encounters boil down to dodging when you see the ‘Spider-Sense’ icon and countering with a specific move. 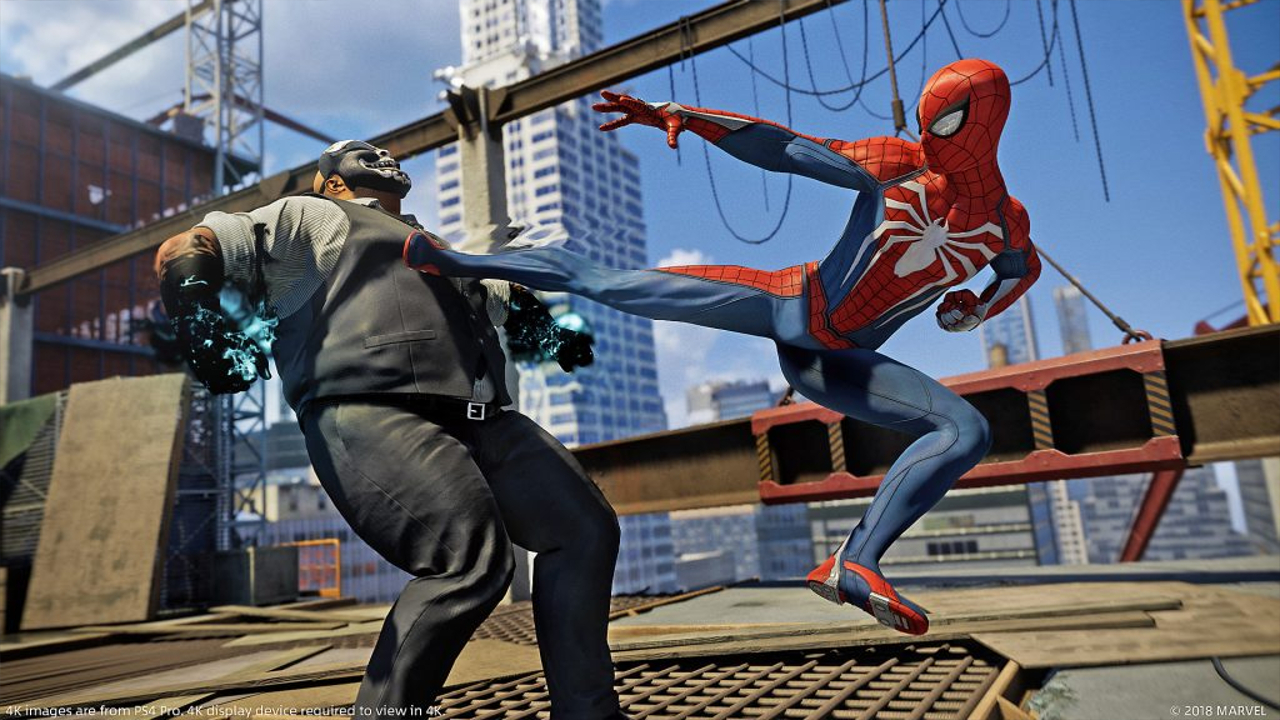 The game could also have used more enemy variety. I’ve counted only around 10 or so main types of mobs, each type then comes in a different flavor (some are Fisk’s men which are standard, others are ‘Demons’ imbued with Mister Negative’s powers). While each combat encounter comes with a mix of enemy types, it doesn’t get to the level of variety in games such as God of War or Horizon Zero Dawn. Stealth is also present in Spider-Man, but it also suffers from a lack of depth and AI that’s not the smartest.

Good thing the boss fights are a blast! The fights are also fairly simple combat wise, but the fact that you’re fighting members of Spider-Man’s rogues gallery is something that’s just plain awesome! Plus, not all story missions and side quests have Spidey fighting enemies. Some missions have Spider-Man swinging through Manhattan to chase fleeing rogues, while some have him race through the city to defuse a bomb; and that’s where the game truly shines.

Swinging through Manhattan never gets old

As I’ve mentioned before in my first impressions of the game, Marvel’s Spider-Man absolutely nailed the swinging mechanic. Swinging around Manhattan has never been this fun! It’s easy to pick up and play, but surprisingly it never got old for me, even if I’ve played the game for over 20 hours. 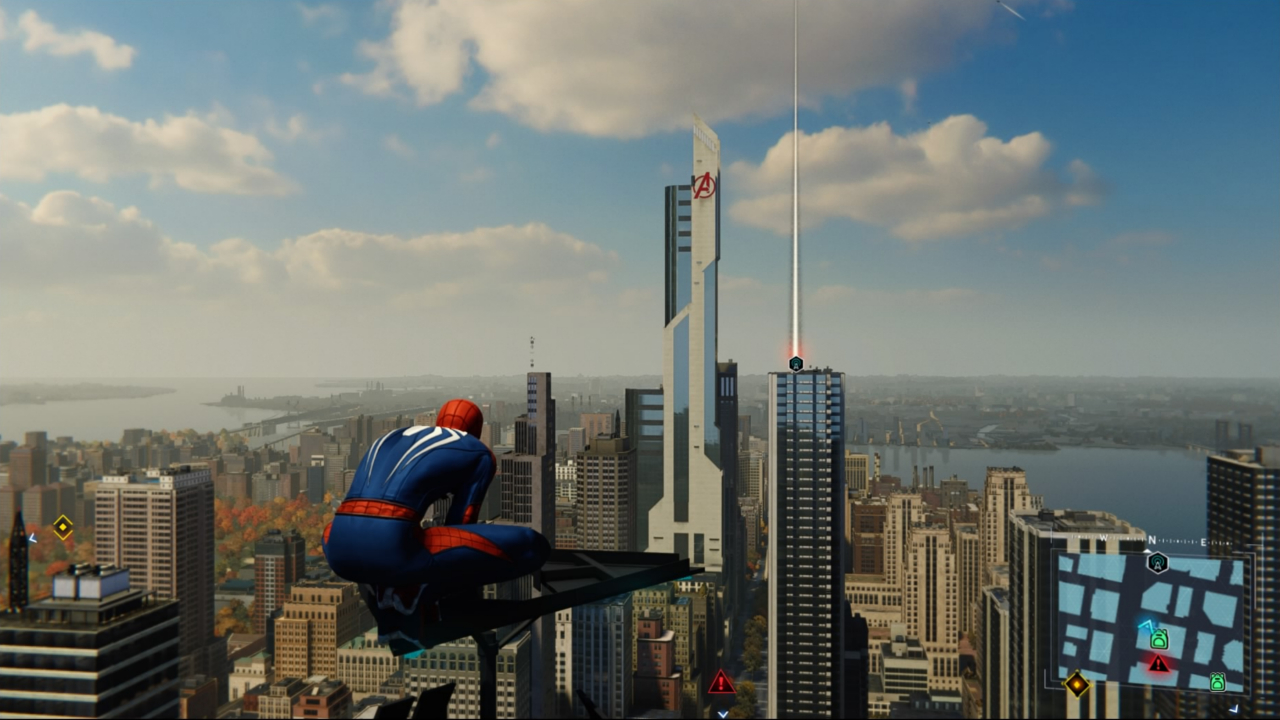 Swinging through buildings is complemented by a couple of other moves such as Point Launches and Web-Zips. A point launch lets Spidey zip to a perch or ledge, which he can then jump off from to gain or continue his momentum. Web-zips meanwhile, let Spider-Man gain speed horizontally, great for areas where there aren’t much buildings to swing from. Spidey can also run on walls and dive off from them. All of these mechanics make for what is probably the best web-swinging experience of all Spider-Man games!

What’s even better about the game is that swinging isn’t just there for you to get from point A to point B. Swinging through the city is integrated into a number of missions, so you really have to get your swing game on to get through certain side quests which are deceptively difficult (for me at least), but without being frustrating. 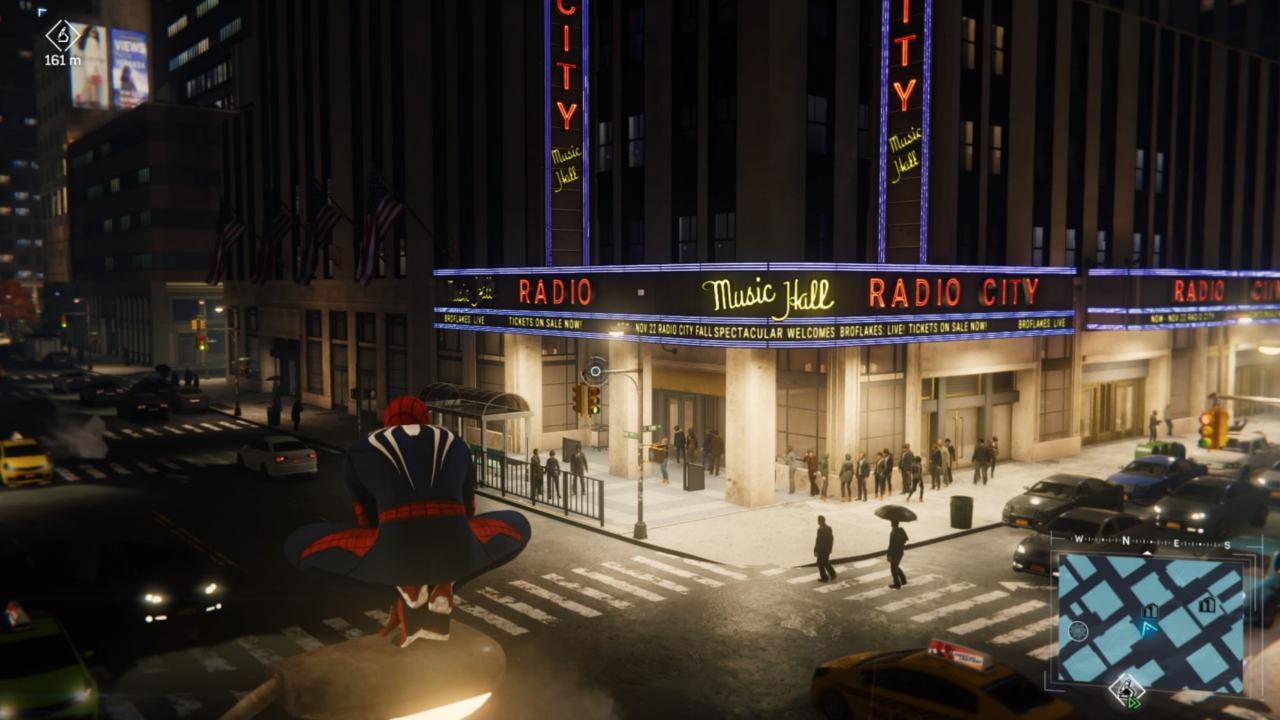 Missions aside, traversing through the game’s open-world is a joy not just because of the polished swinging mechanic, but also thanks to the game’s gorgeous visuals, even if you play on a standard PS4 (though I do recommend playing on a PS4 Pro if you can). Whether you’re climbing up the Empire State Building in the daytime or jumping off Avengers Tower at night, the game’s graphics are impressive.

Speaking of time, there’s no dynamic day-night cycle in the game; the time of day changes depending on your story progression. Good thing you’ll be able to change the time of day to your preference after finishing the main story. 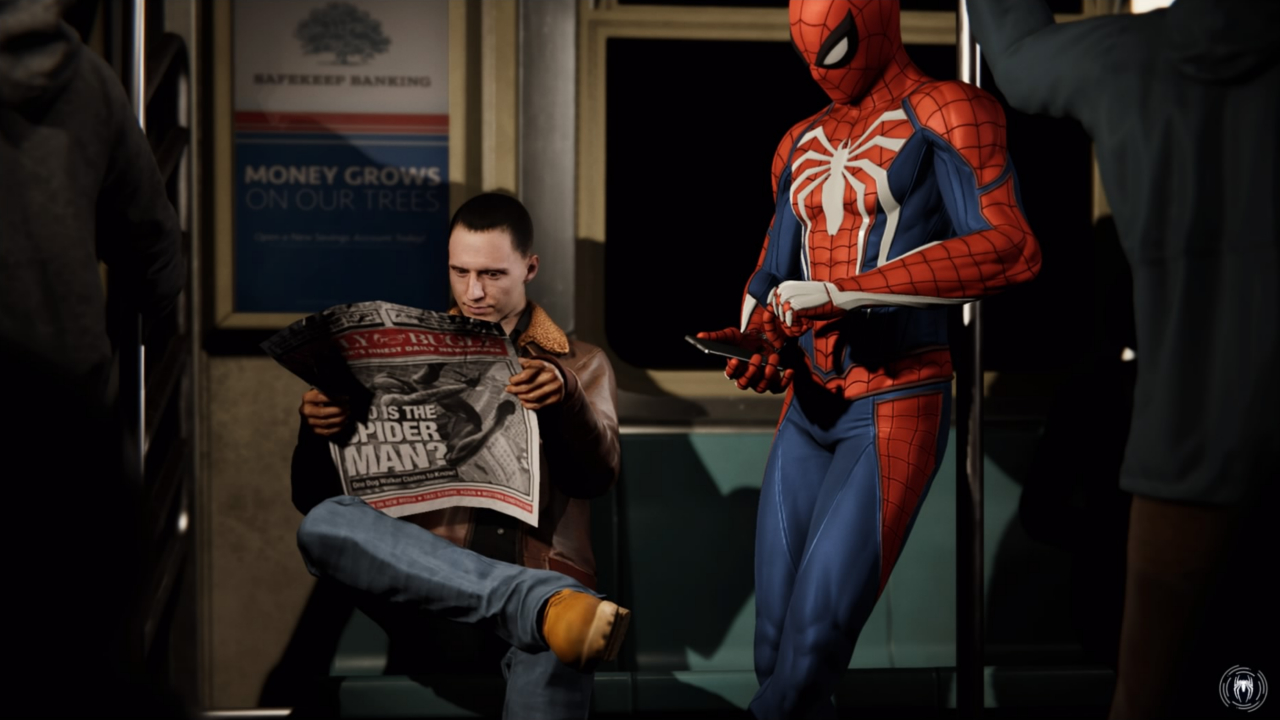 In case you get tired of web-swinging, the game does have a fast-travel system, but it’s mostly a funny bonus. You can fast travel between police departments and some other select locations on the map, and if you do, you’ll be greeted with a loading screen showing Spider-Man taking the NYC subway!

Spidey’s Neighborhood is filled with things to do

During my playthrough, I rarely fast-traveled, as doing so would’ve prevented me from playing through the the game’s content-rich open-world. As this is a Spider-Man title, the game is set in New York, though not the whole of NYC is playable mind you as it takes place only in the borough of Manhattan. While this may seem small, it’s filled to the brim with crimes to prevent and collectibles to discover.

Some of the things that you can do throughout Manhattan include: stopping ongoing crimes, activating research stations, unlocking towers (Ubisoft style), finding backpacks, taking pics of NYC landmarks, and many more. Then there are also longer Side Missions, as well as mob bases that need to be taken down. It may be overwhelming at first, but it’ll become more manageable as you go along the game. 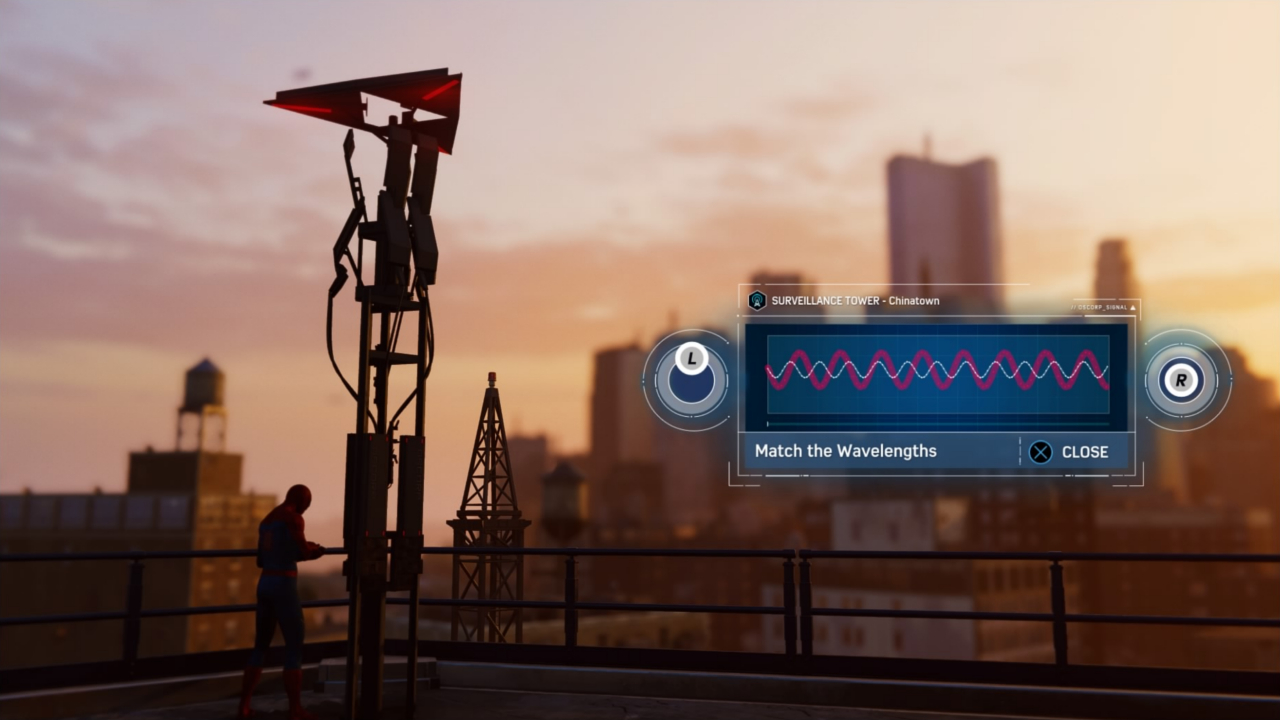 A number of these quests are combat-based, though some focus on swinging through key points of the city. Others meanwhile have mini-games, such as the cell towers to unlock more of the map, or the voltage control and substance mini-games that pop up both in side quests and main story missions. I personally found them fine enough, though thankfully there aren’t too many of these mini-games for those of you who hate these kinds of additions.

Completing each of the game’s numerous tasks will give rewards in the form of EXP and Tokens. These tokens are integrated into the game’s progressions system, as you’ll need a wide variety of tokens to unlock suits and gadget upgrades. This gives players an incentive to play through these mini-missions, though you don’t have to go through all of them to progress; you can leave them for when you finish the main story. 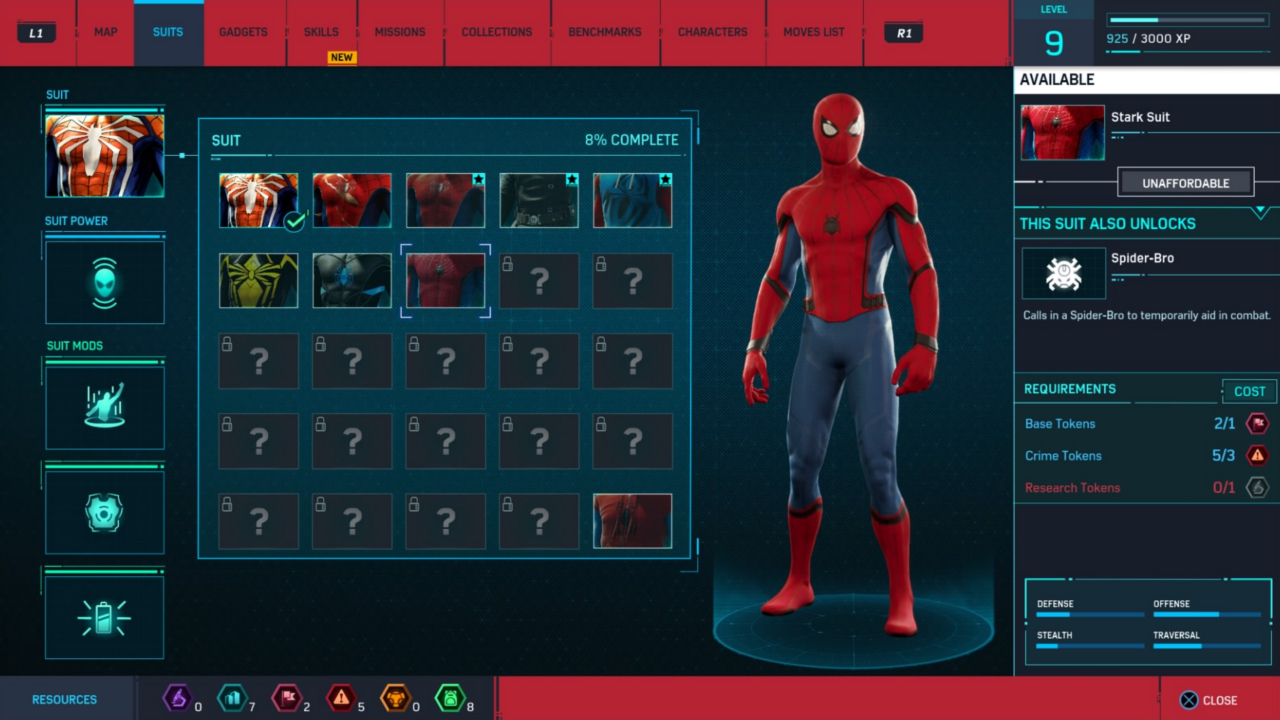 Going through the main storyline in a standard pace will take around 20 hours, adding all the other side content will give players around 25-30 hours of gameplay time. This is a good length in my opinion, as it’s still long enough to justify a purchase, but the game doesn’t overstay its welcome. Of course, you can always play through most of the other missions even after you 100% the game. Now if only there was an option to replay through the game’s boss fights. 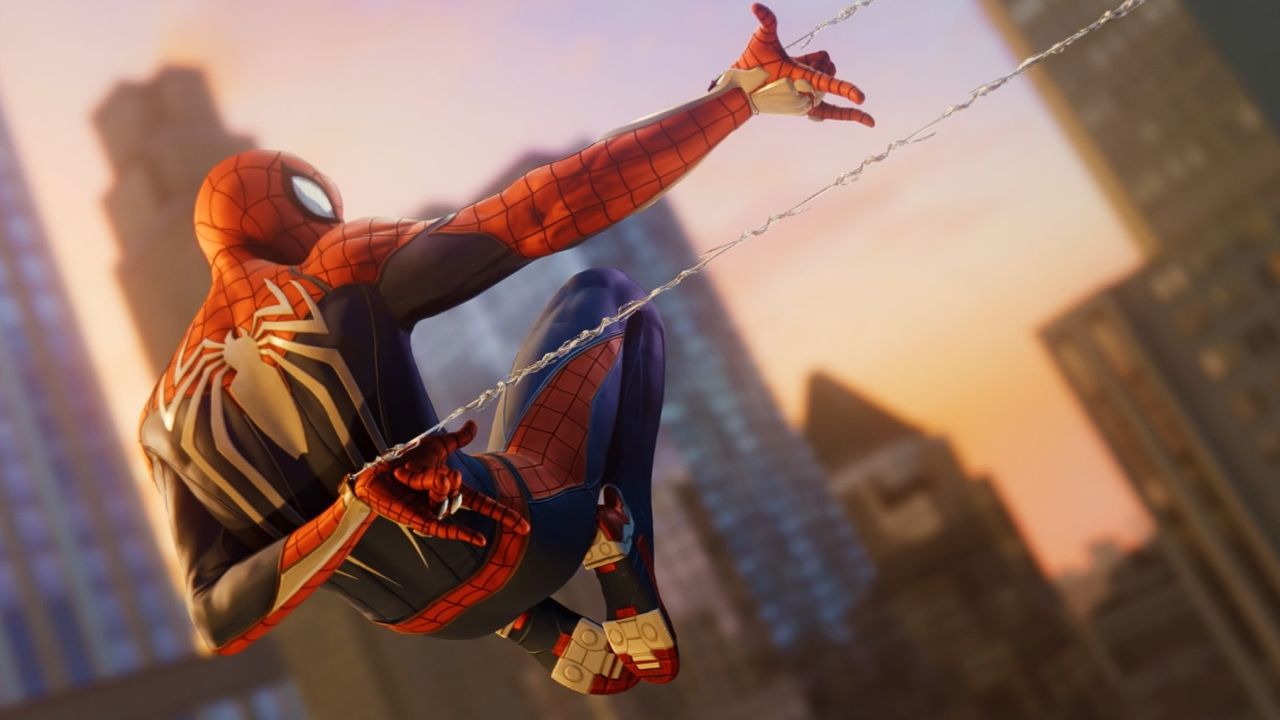 Does Marvel’s Spider-Man live up to its immense hype? For the most part, it does! It’s probably one of the best, if not the best Spidey titles ever released, all thanks to the exhilarating web-swinging mechanic that never got old in my over 20 hours of playtime. The story is also another highlight, as the characters are true to their comic book and/or movie counterparts; even the villains had motivations that are well thought of. There’s also not a lack of content, given the sheer amount of things that you can do in the game’s open-world — a beautifully rendered Manhattan.

While it’s a really good game, its by-the-numbers combat could’ve been more creative; this is a Spider-Man game after all. Enemy variety could also have been improved. But overall the pros outweigh the cons, and we still highly recommend the game for PS4 owners, especially if you’re a big fan of the Friendly Neighborhood Spider-Man!

*This game was reviewed using a PlayStation 4 Slim via a review copy sent by Sony Interactive Entertainment Singapore and Insomniac Games.