The Umbrella Academy kicked off its Netflix premiere with a bang! 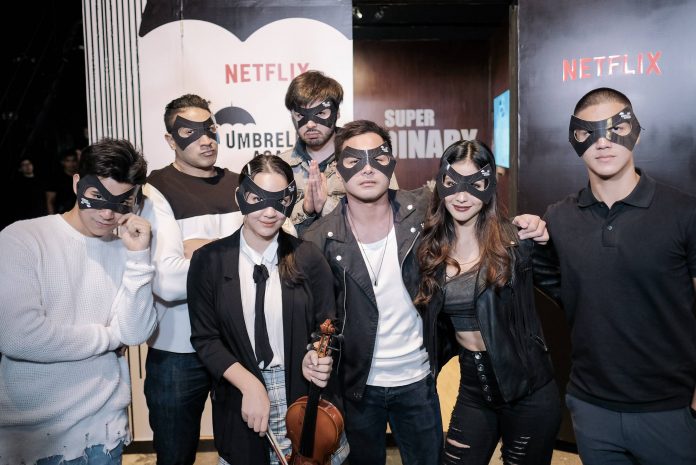 The Umbrella Academy premiered on Netflix last Friday, February 15, and to celebrate the launch of its brand-new Original Series, Netflix threw a party like no other with an immersive super room experience that allowed fans to live like the show’s seven superhero siblings! Powered by PLDT, Smart and LG, the Seven Super Rooms experience housed seven unique rooms, each themed after the lead characters from The Umbrella Academy, and featured fun and interactive elements from the show.

Just as the heroes of The Umbrella Academy need to work together to save the world, Netflix also gathered popular Pinoy personalities, including Eric Tai, Andre Paras, Sanya Lopez, Benj Alves, Brent Manalo, Santino Rosales, and Aryanna Epperson to solve the challenges in their assigned theme room. It was pretty awesome to see these personalities transform right into our very eyes to take over each super room assigned to them.

Each of the seven Super Rooms are themed after the superhero siblings from The Umbrella Academy, check them out below:

TV host and rugby player Eric Tai took on the room of Luther, the leader of The Umbrella Academy. As he has spent most of his life in solitude on the moon, his room was themed as a space station, where everything is miniature sized to make you feel super big and super strong.

True to his vigilante character, Diego’s Super Room was styled as a dark hero’s lair, complete with gadgets and weapons. To solve the puzzle, actor Andre Paras showed off his marksman skills, just like Diego!

To unlock her room, actress Sanya Lopez channelled her inner pop star and flexed her music trivia (and singing!) skills in Allison’s room, whose power is to manipulate reality.

Like the eccentric and party-loving Klaus, actor and host Benj Alves solved his dive bar-themed room by concocting the perfect cocktail to die for. Klaus’ super power is his ability to talk to the dead.

The Boy possesses unique time-traveling abilities, but somehow has managed to stay (and look) the same age. Model Brent Manalo took on The Boy’s nostalgic-themed room by beating video games from different eras.

If you haven’t yet, catch The Umbrella Academy only at Netflix for a dysfunctional yet rockin’ good time!

*All photo credits to Netflix and Magic Liwanag