Not bad at all for the price. 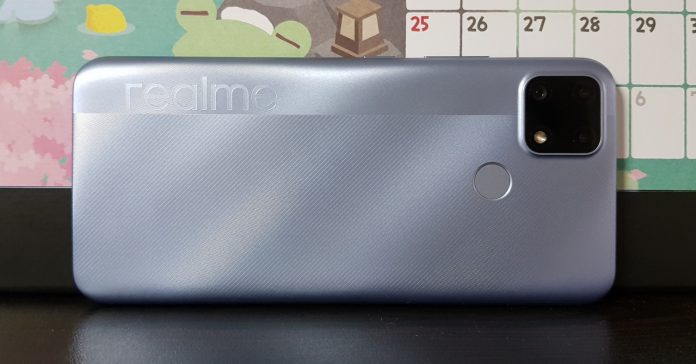 We’re just in our fourth month of 2021, and realme has already released several devices, including the gaming-focused narzo 30A, as well as the Smart TV and Watch S pro. Now, realme has launched yet another device, the realme C25. As the latest in the brand’s budget-friendly C-series, the C25 has an affordable price tag that makes it a seemingly good match for budget-conscious buyers and/or students.

The price isn’t the only thing interesting about it though, as the phone packs several features that punch above its SRP. For one, the C25 has a 48MP main shooter in its triple camera setup; that’s usually a camera that’s found in mid-range devices. Another feature is its Helio G70 processor which should make it a good match for light gaming. On top of these, the C25 packs a 6000mAh battery. 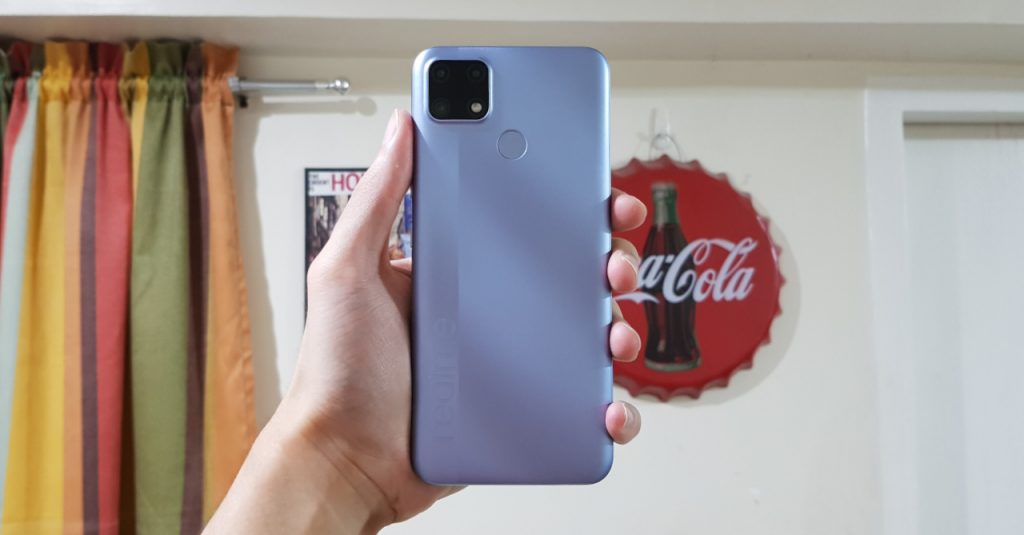 While the C25 has all the makings of a great budget phone, does it deliver in actual use? Find out here in our realme C25 review! 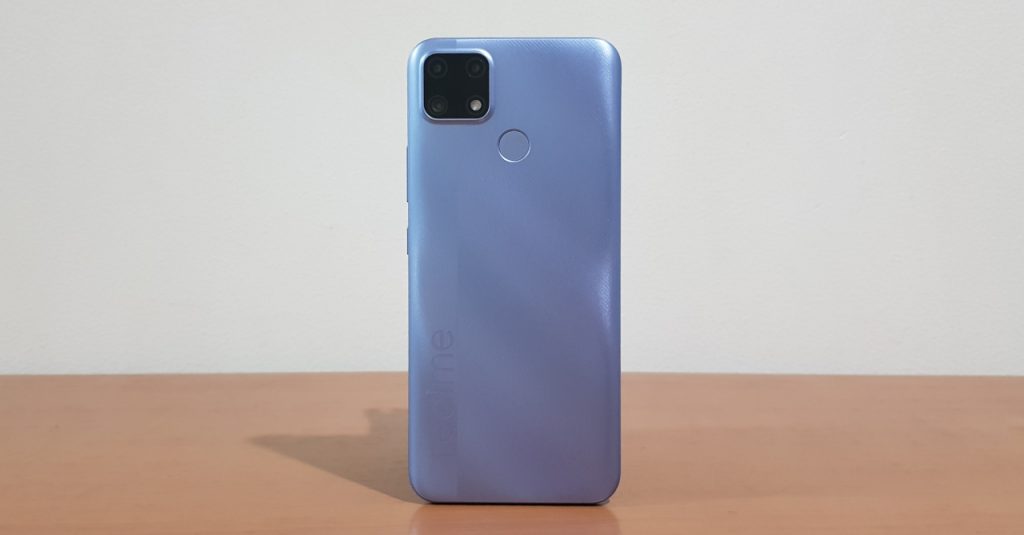 To open up our realme C25 review, let’s take a look at the phone’s design. For starters, the realme C25 features a polycarbonate back with a two-tone finish and a large realme logo on the lower left (similar to last year’s C11). This look is called the ‘geometric art design’ by realme, and it looks quite nice in person. It feels nice to hold too, as it’s not slippery at all, meaning you can use this without feeling like it’ll slip out of your hand for gaming or for everyday use, even with no case.

Aside from looking nice for a budget phone, realme also highlights the phone’s durability. Specifically, realme says that the C25 is one of the first smartphone to pass the TÜV Rheinland Smartphone High Reliability Certification, meaning it should be built to last for three years (based on the certification). While we can’t fully test if the phone is as long-lasting as the certification states, we do agree that it feels quite sturdy and well-built. 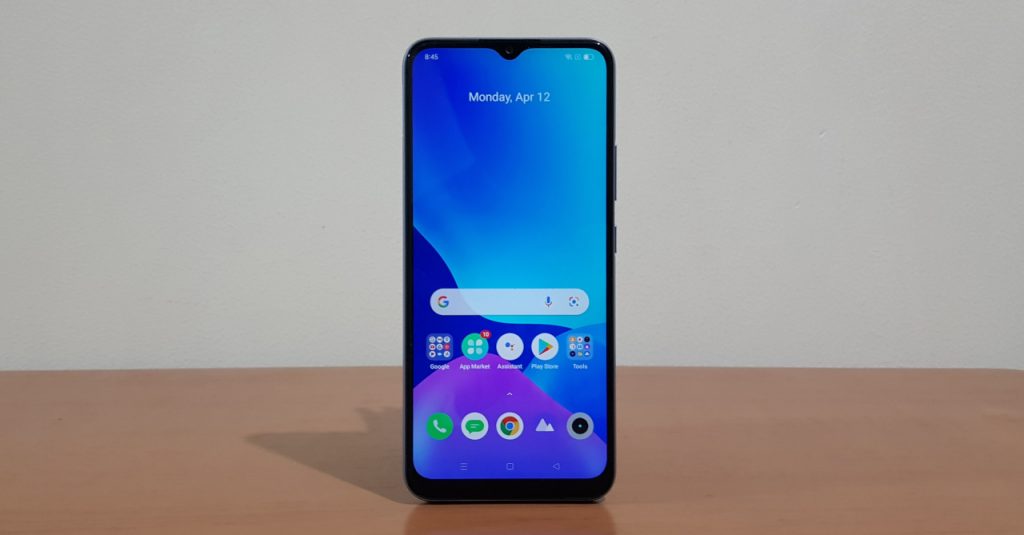 Moving to the front, we have the phone’s 6.5-inch display that has a waterdrop notch at the top for the 8MP selfie shooter. There isn’t much to say about the phone’s look here, especially as most entry-level Android models have pretty much the same look at the front. Still, the C25’s look is decent overall, and it should satisfy most entry-level users. 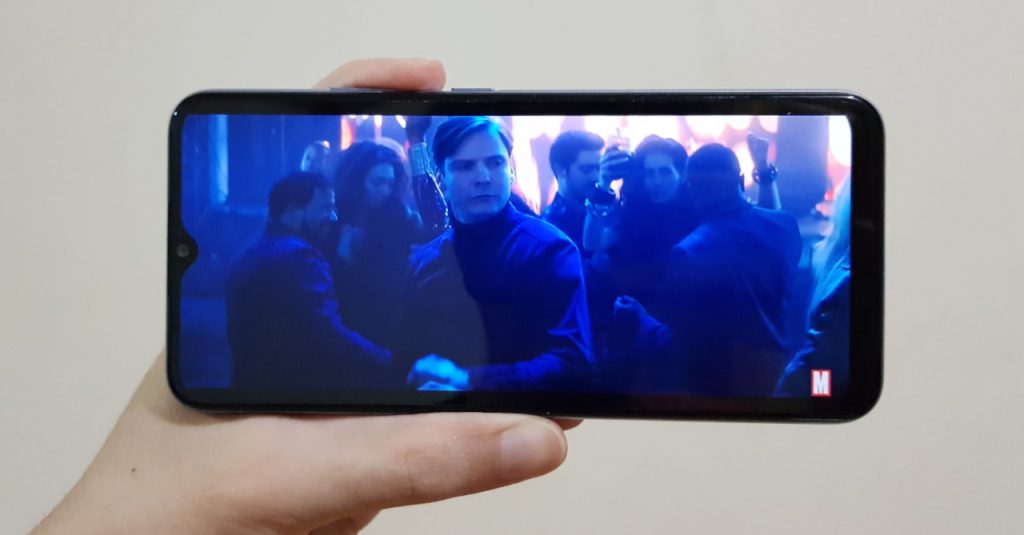 Speaking of display, the C25’s 6.5-inch IPS LCD screen has an HD+ (720p) resolution, meaning it’s not exactly the sharpest screen out there. Though it does get fairly bright, and its output has good enough sharpness and color output to make it a decent partner for binge-watching movies and shows.

As for audio, the C25 packs a single, bottom-firing speaker. As expected, the onboard speaker can sound lacking in body, especially at higher volumes. Make no mistake though, the speaker output is not bad for a budget device. Just make sure to have external speakers or headphones for your binge-watching and/or music needs. Good thing the phone has a 3.5mm headphone jack, meaning you can go either wired or wireless for audio.

The realme C25 is powered by a MediaTek Helio G70 processor. In our experience, the Helio G70 is a pretty capable processor, even if it’s not exactly the newest chipset out there (as it was also used in last year’s realme C3). 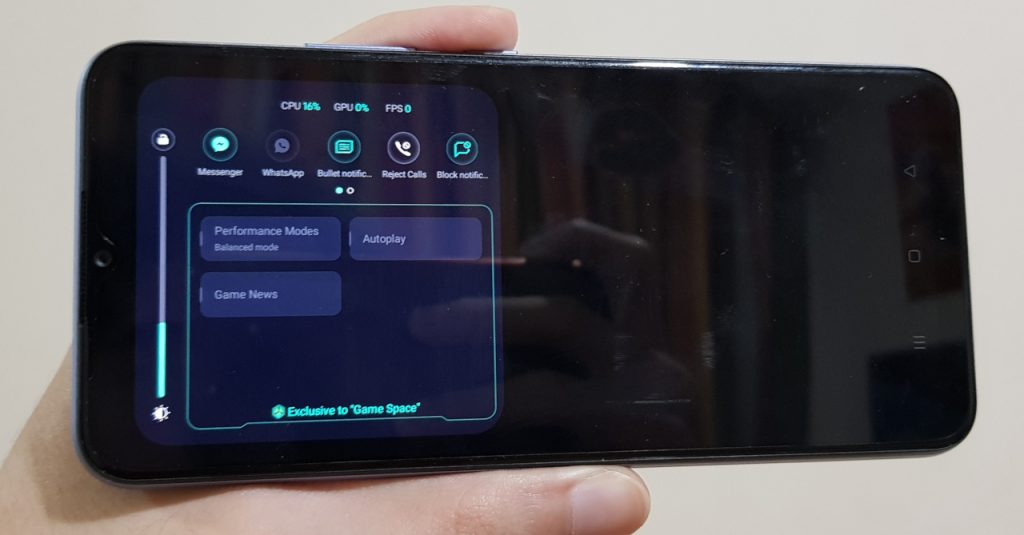 Before we tackle gaming performance, one thing to note with the C25 is that it features Game Space, realme’s game software that gives a bit of a performance boost. Though in our review time, we appreciated Game Space’s notification blocking feature while playing games. 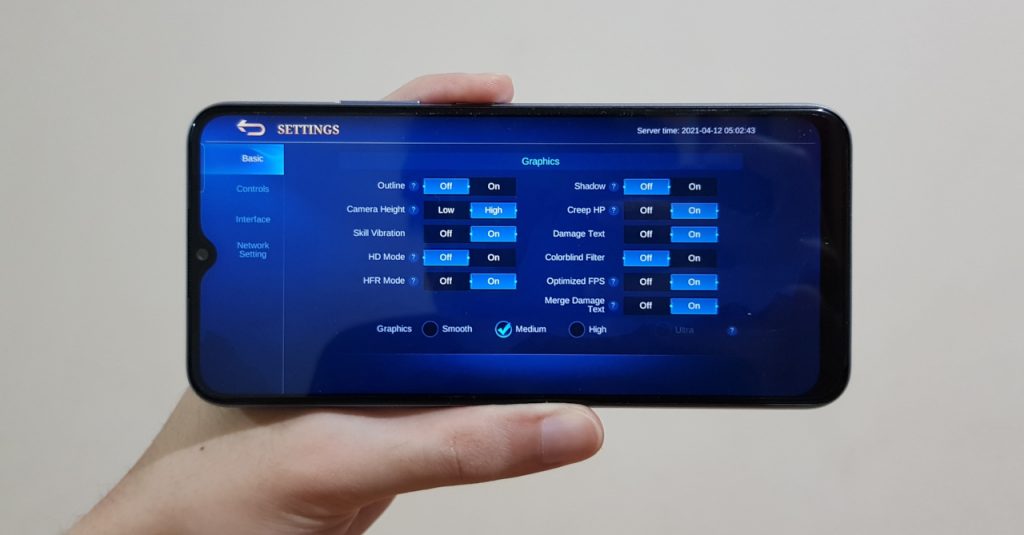 As for performance, the C25 delivers good performance for less-demanding games such as Mobile Legends. Specifically, MLBB did default at Medium graphics, but we had a smooth gaming experience even when the graphics setting was on High.

For more demanding games like Call of Duty Mobile, the realme C25 had enough power to run them smoothly. Though expect to run these kinds of games at lower settings. CoD Mobile for instance, was able to run smoothly only on the Low graphics setting.

Meanwhile, here are the synthetic benchmark scores of the C25:

For its cameras, realme packed the C25 with a 48MP f/1.8 wide + 2MP f/2.4 macro + 2MP f/2.4 depth sensor triple rear shooter setup, as well as an 8MP front camera. The inclusion of a 48MP shooter is a nice touch given that the phone is affordably priced at well below PHP 10k. In exchange though, the C25 lacks an ultra-wide camera.

For shots taken when there’s lots of light, the 48MP shooter delivers good quality images with nice colors and sharpness. While you won’t mistake it for a flagship phone photo, the C25’s images in these situations are a step above what you’d usually get from previous budget phones.

At night though, image quality sees a noticeable dip, with photos lacking in sharpness and having a bit too much noise. Thankfully, the phone comes with a dedicated Night Mode that takes improved low light shots. Sure, Night Mode shots may still lack a bit of detail when zoomed in, but low light shots taken in this mode offer a big improvement over auto mode photos.

For selfies, the 8MP shooter is good enough, though it does lack a bit of detail upon closer look. Finally, the 2MP depth sensor lets the phone take portrait shots with a decent background blur effect. 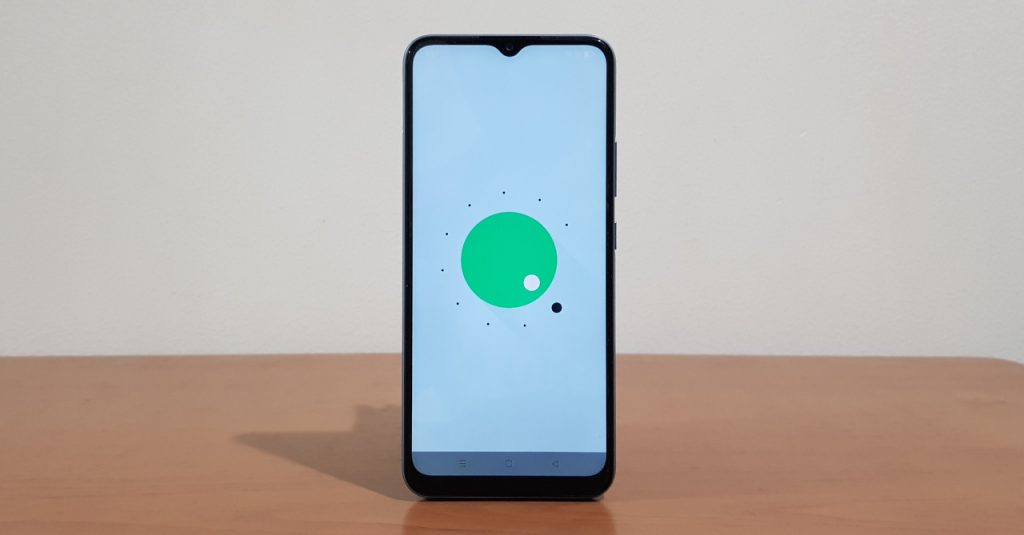 As the phone proved to be quite capable for gaming, the C25 also had enough power for day-to-day use. For most uses, be it browsing social media or checking emails, the C25 should be fast and responsive.

Aside from good everyday use performance, the C25 also impressed with its battery life. Thanks to the massive 6,000mAh battery, the C25 is able to last for two days on a single charge during our review. While your mileage may vary, the large capacity should mean it’ll easily last for a day, even with heavy use.

Aside from noteworthy battery life, we also like the inclusion of a Type-C port, as well as a responsive rear-mounted fingerprint scanner. To top it all off, the phone comes with 128GB storage which should be more than enough for most users. 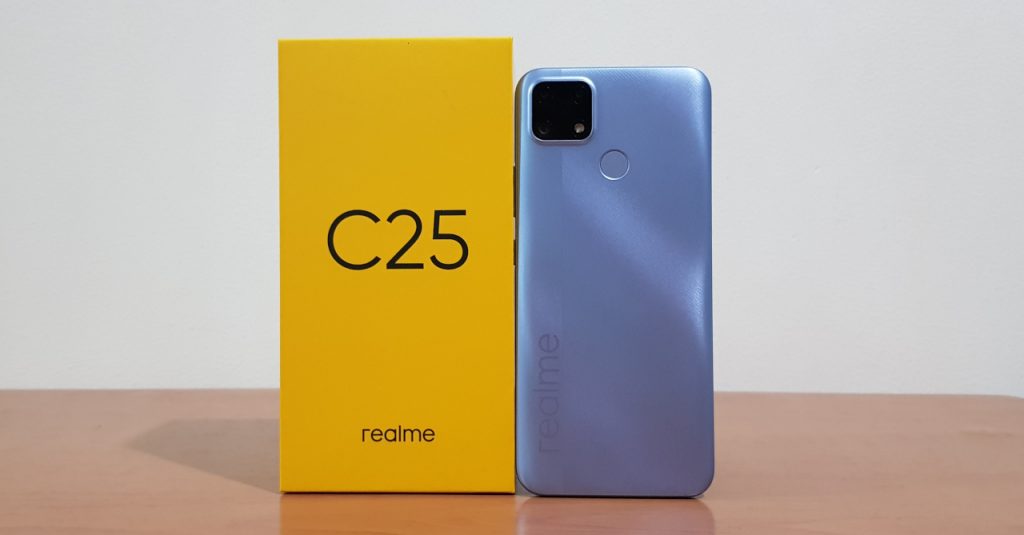 Thanks to its good performance, great build, and long-lasting battery life, the realme C25 is another strong budget contender from realme, especially given its PHP 7,490 price tag. At this price, the C25 is well worth considering for entry-level users who are looking for a new phone for work/school.

At its usual price, the C25 is already a pretty good deal. But with the phone getting a price drop to only PHP 5,990 from April 16-18, the C25 is well worth getting soon if you need a new phone.