They can also add depth to gameplay. 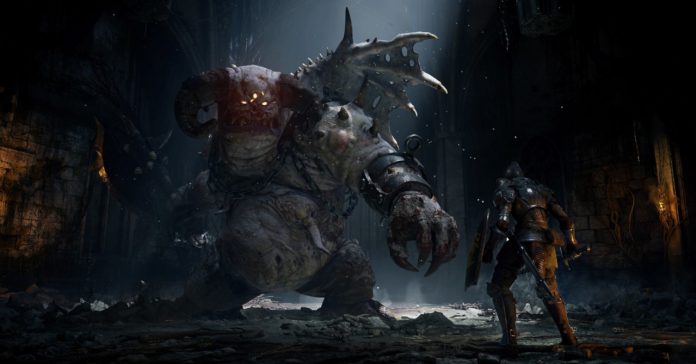 While the Demon’s Souls remake received rave reviews, it likely isn’t first game that pops into most PS5 owners’ minds when haptic feedback and 3D audio is mentioned. For most, the free PS5 title Astro’s Playroom is seen as the better showcase of the console’s highlight features as the impressive DualSense feedback and audio help make players feel more immersed in the game.

After sinking plenty of hours on the Demon’s Souls remake though, I’m now of the opinion that it is actually the better showcase of the PS5’s new tech. Sure, its usage of haptics may not be as cool as how Astro’s Playroom lets you feel the sensation of walking through sand or skating through ice, but it does something that, for me, is much better. It uses these features not only to enhance immersion, but also to add depth to gameplay.

Make no mistake, the Demon’s Souls remake uses the DualSense’s haptic feedback to add extra immersion; from the way that swords, axes, and clubs have different sensations with each hit, to the way that the controller rumbles in sync with each Soul Arrow blast. While I found them cool at first, I often forgot about these effects in the heat of battle, especially in my first few hours of gameplay. That was, until I progressed more through the game.

My first run of Demon’s Souls was on a Royalty class character (aka Demon’s Souls on easy mode), meaning instead of blocking and counterattacking, I had to rely on dodging to keep away from enemies so I can blast them with magic. Given my less-than-stellar reflexes, I liberally used the Warding spell which adds a 70% defense buff in the later stages. I can’t count how many times Warding saved my butt, be it in boss fights or against strong mobs.

The problem with Warding is that it only lasts for 40 seconds, meaning I had to pay close attention so I have it up at most times, especially against bosses. Though this proved to be a problem in hectic situations as I wasn’t able to keep track of the visual and audio cues given when the spell fades; it doesn’t help that I found it difficult to see and keep track of the Warding spell when I’m in soul form.

While there are visual and sound effects whenever Warding is casted and fades, it is also accompanied by a unique rumble effect that seems to move around the controller (mimicking the spell’s visuals). This rumble is also distinct enough to feel different from the feedback of rolling or landing successful attacks. Thanks to this, I was better able to keep track of my Warding status; in fact, I found myself relying more on the the vibrations to know when I need to cast Warding again as my eyes were usually more focused on the boss/enemies.

Warding isn’t the only thing that has feedback though, as there’s also the Pine Resin which lights your melee weapon on fire. While wielding a flaming weapon, the DualSense controller produces a strong rumble that emulates the feel of a close flame. Unlike Warding’s lighter rumble which has a circular motion, a burning weapon has a stronger, and more pulsing feel.

Given the different feedback that both provide, I tried stacking them to feel how the DualSense fares. Lo and behold, I was actually able to feel both their effects at the same time. Sure, not a lot of builds make use of Warding and Pine Resin, but I have to admit that it’s impressive that the PS5 controller can produce both effects while still making them feel distinct.

Aside from haptics, the DualSense also features Adaptive Triggers. As expected, these triggers can be felt when using a bow & arrow. Specifically, the R2 trigger provides some resistance at the halfway point, meaning you get a sense of when an arrow is notched as there’s pressure on the trigger when you press down.

It’s a cool effect on its own, but it didn’t much to add gameplay at first for me. Though I found that if you slowly release R2, you can let go of your drawn arrow without wasting it. While Demon’s Souls isn’t the first game to have this feature, I found that the Adaptive Trigger’s pressure made it easier to slowly let go of the trigger without accidentally firing of an arrow. This helped me in not wasting special arrows during the early part of my second Demon’s Souls remake run.

Traversing through the levels in Demon’s Souls is a tense and challenging experience, especially in certain areas set in dark environments where enemies can seem to pop up out of nowhere. In these levels, I found that the PS5’s 3D audio feature when using headphones was a godsend as I was able to accurately locate enemies before they’re able to ambush me. 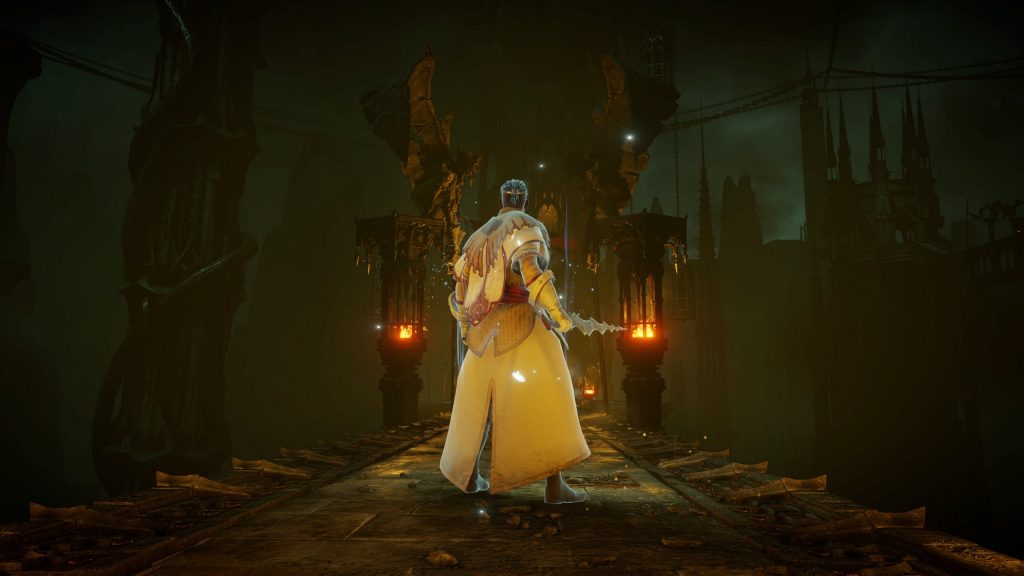 Take Upper Latria (3-2) for instance, an setting that features slim corridors and hallways where falling means death. The level features gargoyles that can take players by surprise and either kill them, or force players to panic-roll to their death. When using headphones though, I was able to hear exactly when a gargoyle was about to attack me, and pinpoint which direction it was coming from. This meant I was prepared and did not panic (for the most part).

Upper Latria wasn’t the only place where I made use of 3D audio to help locate enemies though. Be it in the Tunnel City (2-2) with its flying bearbugs, or in the Inner Ward with its Red Eye knights, I relied on their directional audio cues so I won’t get caught off guard as I progressed. 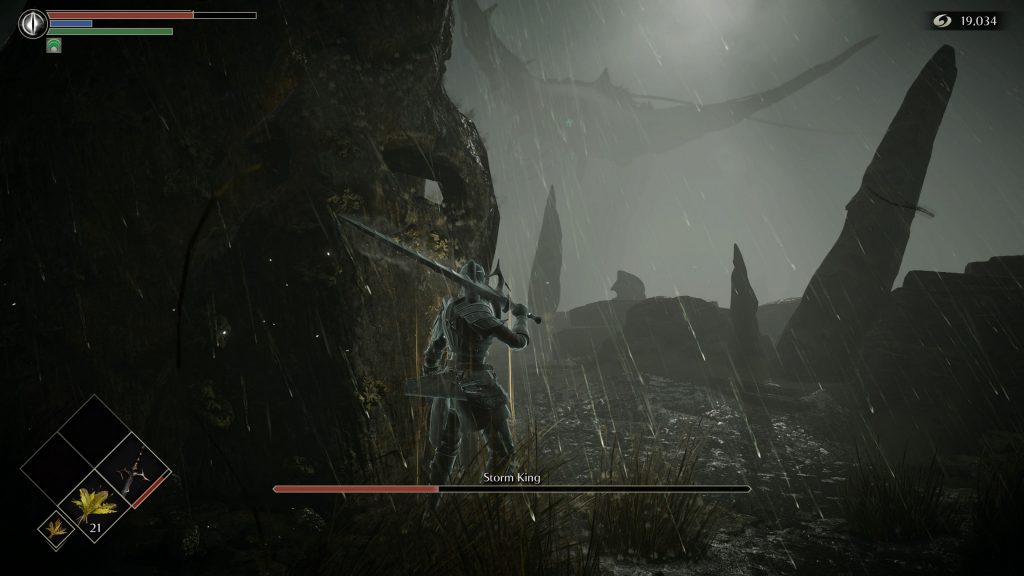 3D audio wasn’t just helpful for exploration, it was also quite useful for boss fights. One such boss is the Storm King where you must keep in cover lest you want a quick death. With headphones on, I was able to know where the Storm King is coming from even if I can’t see him behind cover, meaning I was able to position myself well for a strike or two. 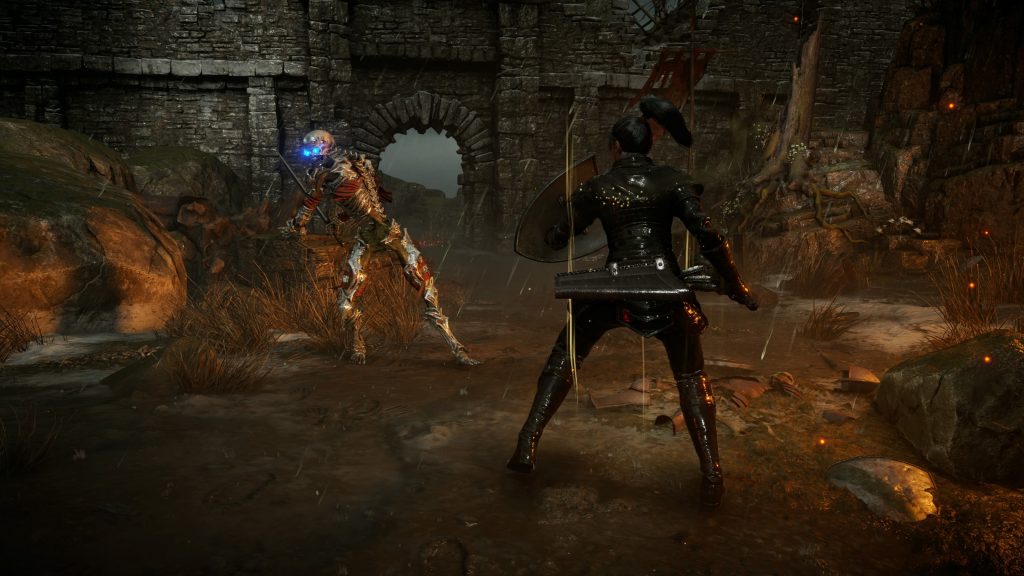 The game’s audio cues proved to be incredibly useful in my Demon’s Souls runs, though aside from helping my gameplay, the 3D audio also added in my general enjoyment of the game. While not exactly lifelike, I found that the audio with headphones on actually let me hear if some sounds came from above or below me; this is most evident when the dragon breathes fire upon walkways in the early Boletaria levels. The audio even added some extra tension in some levels as I found myself flinching and panic-rolling at certain sounds which weren’t even made by enemies.

To experience 3D audio though, you’ll need headphones as it currently doesn’t support speakers. Thankfully, it works with most headphones. While I had the best experience with my full-size open headphones, the 3D audio can even be heard even with just in-ear headphones. Though with in-ears, the verticality of audio is a bit lessened.

Taken on their own, the haptic feedback and 3D audio features aren’t exactly groundbreaking. 3D audio in itself isn’t really all that different from other headphone surround sound tech. But when combined and implemented to the level seen in the Demon’s Souls remake, these features add an extra layer of depth to gameplay, all while enhancing the game’s immersive quality.

Given that Demon’s Souls is an early generation game, I’m definitely looking forward to seeing how future titles take advantage of the PS5’s DualSense controller and audio tech. Here’s hoping that even third-party games, and not just first-party exclusives, can use these features to enhance gameplay.