Here's hoping this gets a worldwide release! 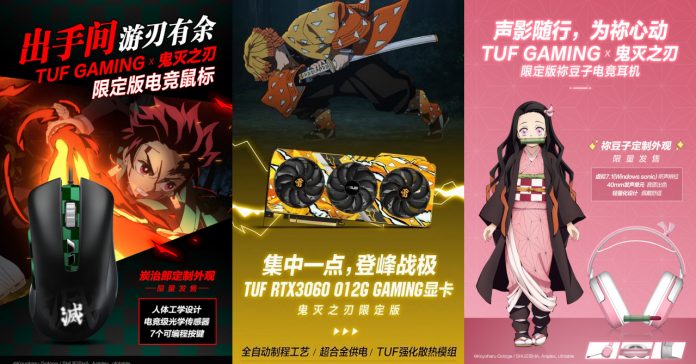 Following the release of the ROG x Gundam Collection, ASUS is gearing up for another anime-inspired gaming hardware lineup with the ASUS x Demon Slayer: Kimetsu no Yaiba collection!

According to a post on Weibo, the ASUS x Demon Slayer lineup will release soon in China, and it will feature a range of mostly TUF Gaming PC gaming hardware and peripherals that have designs based on the characters of Kimetsu no Yaiba.

While Tanjiro is the series’ main character, the ASUS collection highlights fan-favorite Zenitsu more as the lineup features five Zenitsu-inspired items, including:

Next up, we have two Tanjiro-inspired peripherals: a TUF Gaming mouse and a TUF Gaming headset. We also have another WIFI router, specifically it is an RT-AX82U with a design and color scheme that’s inspired by Inosuke.

A Demon Slayer collection isn’t complete without Nezuko, and this ASUS collab is no exception as it features a TUF Gaming mousepad and headset, both of which feature a pink colorway and design elements inspired by Nezuko’s signature kimono.

Rounding out the collection is a Demon Slayer edition VivoBook Pro 14 laptop which features a special Tanjiro decal.

From the looks of it, this collection is confirmed to release in China only. Though given that the ASUS x Gundam collab was released globally after a China release, we’re hoping to see this Demon Slayer line to release in other countries as well.

- Advertisement -
Previous article
The Witcher 3 will get a next-gen update, with DLC inspired by the Netflix series
Next article
Score Up To PHP 2,000 Off on OPPO Reno5 4G and A15s until July 31