HoloEN is finally getting the figure treatment! 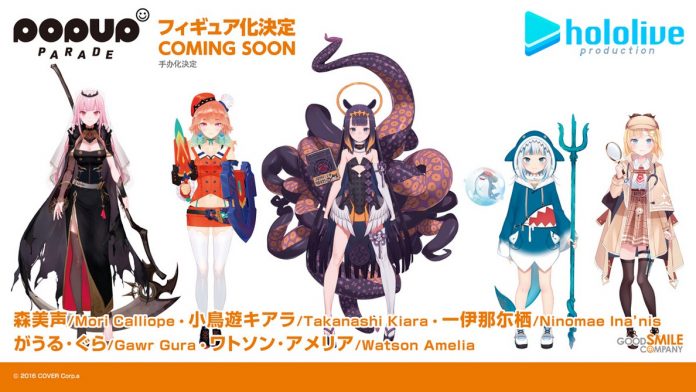 Just like the other figures from the Pop Up Parade lineup, the HoloEN figures will stand about 17-18 cm and are all static figures so they won’t have any articulation. But the Pop Up Parade lineup is well received by figure collectors for its affordable price (roughly USD 38.99/PHP 1,921.68) while still retaining the same quality as the standard figures that cost more.

Attention shrimps, Nendoroid Gawr Gura from hololive production splashes onto the scene! She is currently in production. More details, including a preorder window are coming soon so stay tuned for more!#hololive #goodsmile pic.twitter.com/sIee5M760H

Additionally, Good Smile also announced the Gawr Gura Nendoroid based on the Vtuber Gawr Gura of HoloEN. The announcement revealed the colored prototype. The Gawr Gura Nendoroid will have two interchangeable faceplates (still no bottom teeth), a special stand, her Trident, and Bloop as her accessories. This Nendoroid was also mentioned during her Livestream to commemorate her 2 million milestone (and later 3 million) for the most subscribed Vtuber on Youtube.

Both HoloEn’s Pop Up Parade figures and the Gawr Gura Nendoroid is coming soon, with the latter opening its pre-order window very soon. So better save up if you want to get them all!