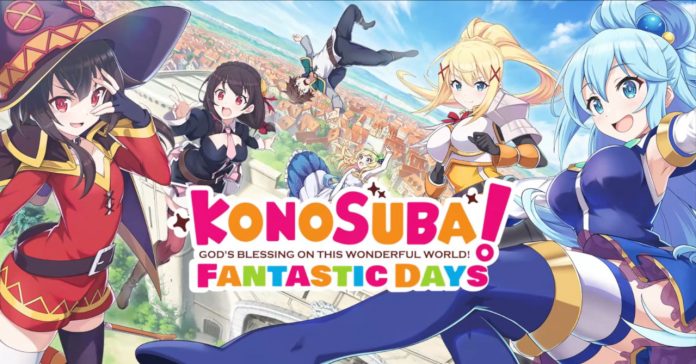 After the announcement of a global release back in November, Nexon has revealed that pre-registration for the mobile RPG KonoSuba: Fantastic Days is now live! Mobile gamers from all over the world can now pre-register for the English version of the game via the game’s official website or on the Google Play Store. And yes, the game is also available for pre-registration in the Philippines.

Not familiar with the game? KonoSuba: Fantastic Days is a free-to-play character-collection mobile RPG that’s based on the KonoSuba light novel/anime series. The game will feature fan-favorite characters, including the likes of Kazuma, Aqua, Megumin, Darkness, and more. The game is also shaping up to be a must-play for KonoSuba fans, especially as it features an original story and features voice acting from the anime series’ voice cast.

In case you haven’t seen the anime yet, we highly recommend checking it out as it is easily one of our favorite comedy/isekai shows ever!

KonoSuba: Fantastic Days will release on iOS and Android worldwide, and it will arrive later this year. Pre-register for the game now at the game’s official website or via Google Play.

- Advertisement -
Previous article
The Huawei Watch 3 and FreeBuds 4 are now available for pre-order in the Philippines
Next article
Hololive announces debut of IRyS, the first HoloEN VSinger