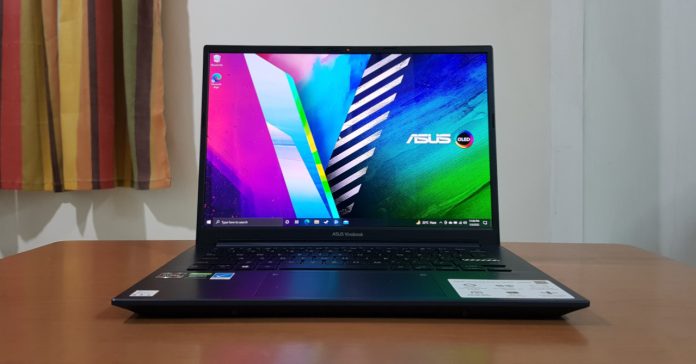 Back in December, we got our hands on the new Vivobook Pro lineup, including the Vivobook Pro 14 OLED and the Pro 15 OLED. Of the two, the notebook that we first tested out fully was the Pro 14 OLED, an interesting laptop that might seem unassuming, but it actually packs internals that can rival even dedicated mobile workstations. 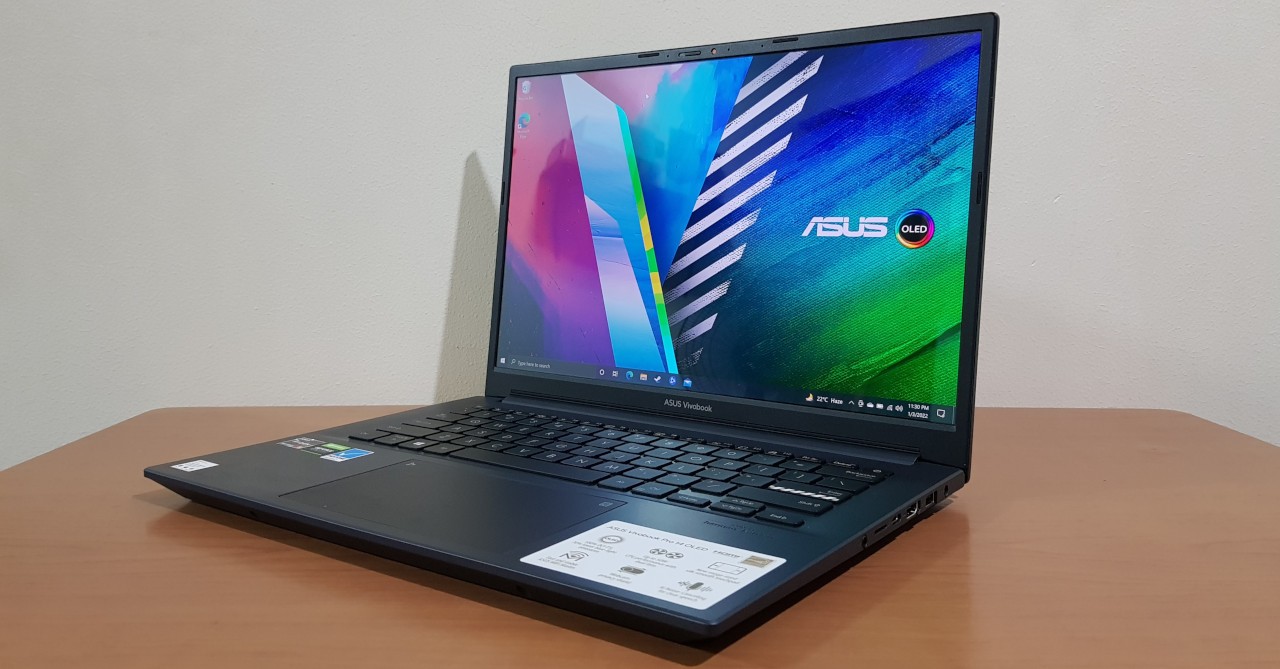 While ASUS Vivobooks are designed for general use (i.e. school/office work), this Pro model has more in common with workstation models given its powerful processor and GPU, all at a price tag that doesn’t breach the six-figure mark.

The Pro 14 OLED is great on paper, but does it deliver in actual use? Find out here in our ASUS Vivobook Pro 14 OLED review! 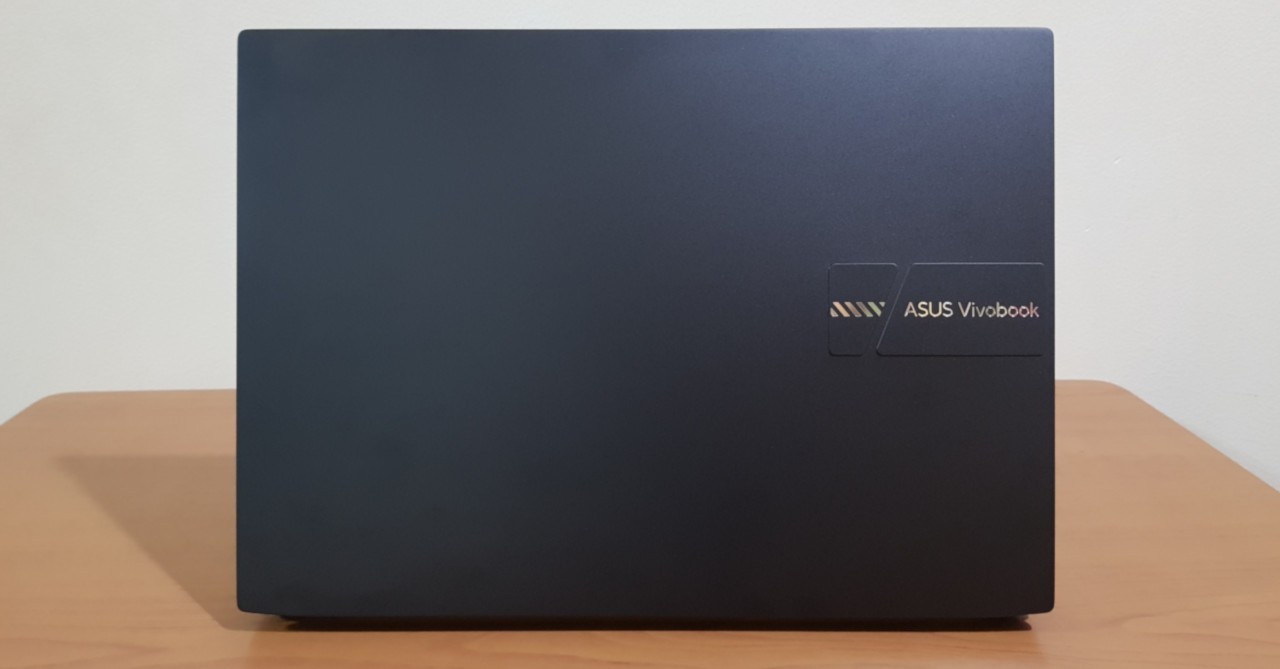 As we noted in our impressions, the Pro 14 OLED features a major design shift compared to other Vivobook laptops. While it loses the more colorful design of the non-pro models, it does come with a sleek design that looks very much like a serious laptop, all while having some nice design elements to keep things interesting.

Specifically, these design elements are the laptop’s raised Vivobook logo on the lid, as well as its enter key. Both these feature what seem to be Off-White-inspired designs, meaning fans of street/techwear will likely be fans of this look. In fact, its look does remind us a bit of the Zephyrus Alan Walker and the ACRONYM special editions, albeit much subtler.

For I/O, the Pro 14 OLED features the following ports: 1x USB 3.2 Gen 1 Type-A, 1x USB 3.2 Gen 1 Type-C, 2x USB 2.0 Type-A, 1x HDMI 1.4, 1x 3.5mm Combo Audio Jack, and a microSD card reader. This is a good amount of ports that most users should be more than happy with. Though if you ask us, we would’ve preferred a full-size SD card reader, especially for creators who use cameras with SD cards. 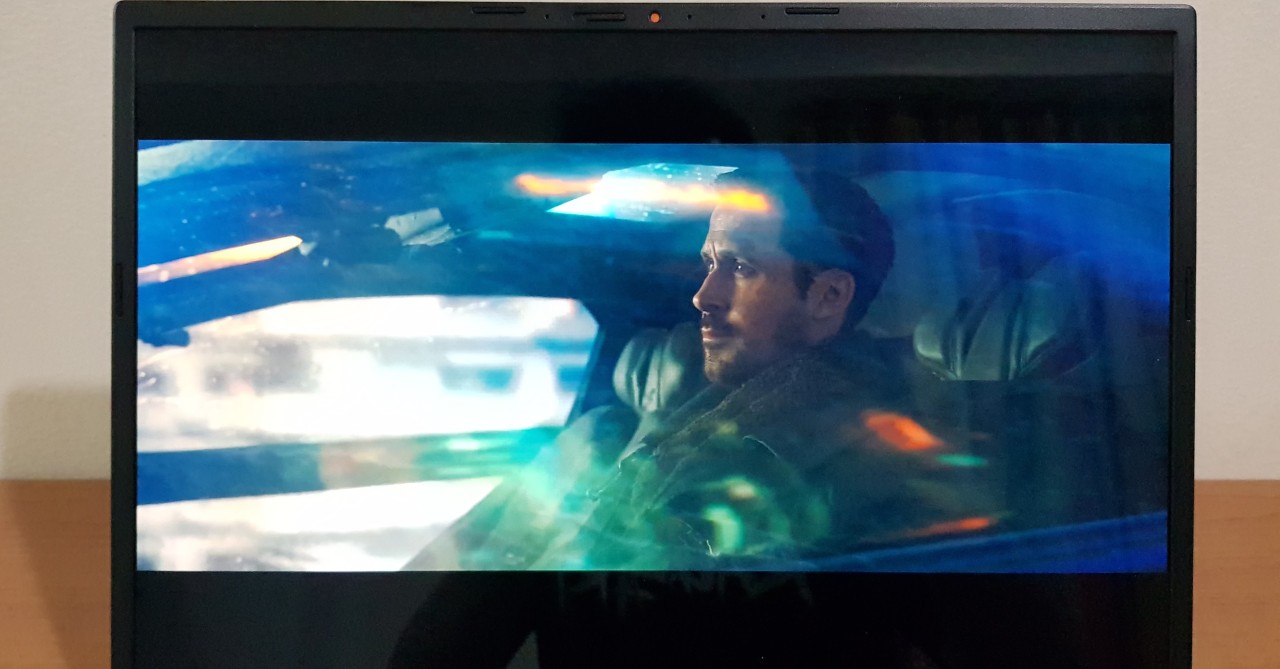 Thanks to the vibrant colors and good level of brightness of its OLED screen, watching movies and TV shows on the Pro 14 OLED is a great experience. While the 16:10 aspect ratio does mean you’ll get bigger black bars when watching widescreen movies, this is far from a deal-breaker as the OLED display’s deep blacks mean letterboxing is not at all distracting. Plus, if you watch content with taller aspect ratios, the display will offer an even better viewing experience. 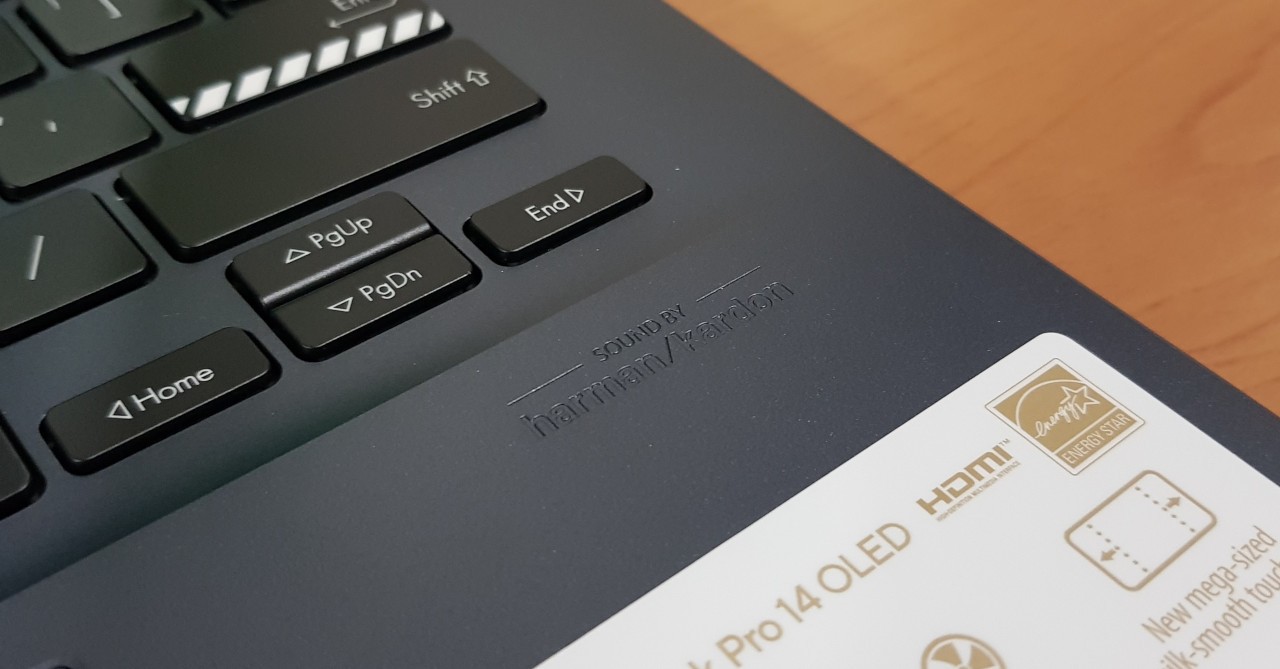 Similar to other ASUS notebooks, the Pro 14 OLED features stereo onboard speakers that are tuned by harman/kardon. Though the Pro OLED 14’s speakers volume and sound quality have improved noticeably compared to previous Vivobooks. In fact, if you’re in a quite room and aren’t too particular with sound quality, you can comfortably watch a movie or listen to music on these speakers. Though headphones or external speakers are still recommended for watching media, listening to music, or working on projects for the best experience. 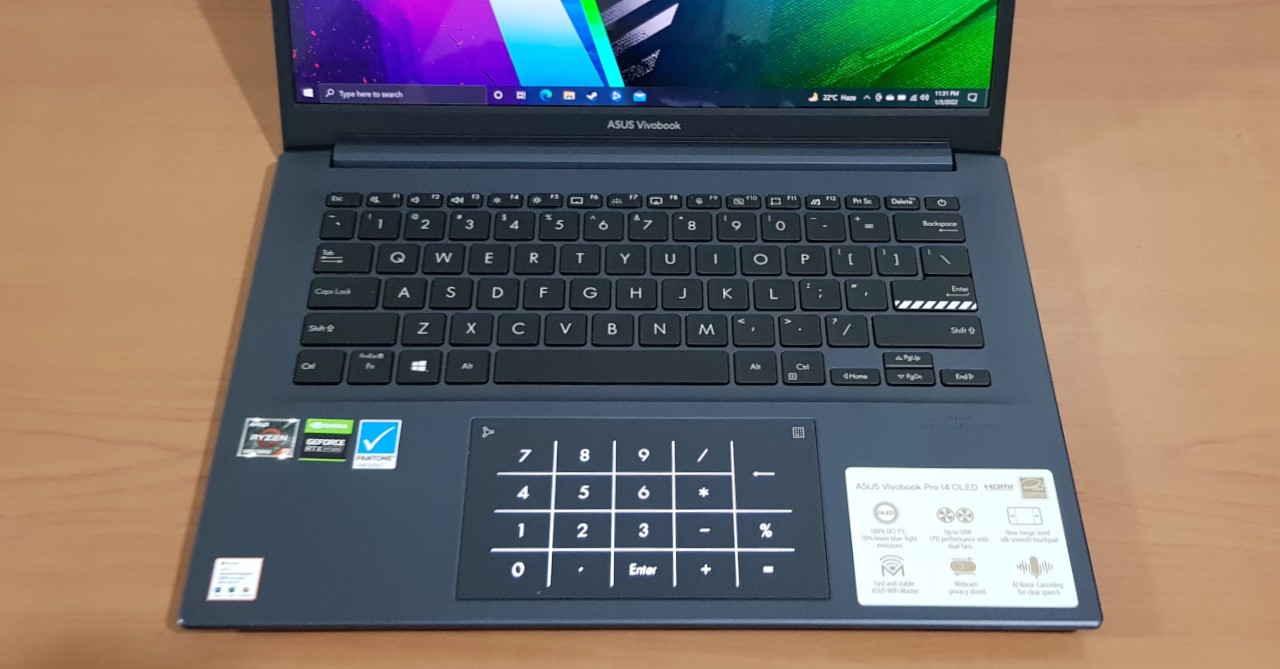 As a 14-inch notebook, the Pro 14 OLED has a tenkeyless keyboard design, though it does pack ASUS’ signature Numberpad 2.0 on the trackpad. This is a great addition for users who work with a lot of numbers for work/school. And if you’re unfamiliar with this integrated number pad, you can easily turn it on or off by tapping the upper right corner.

Meanwhile, the typing experience on the Pro 14 OLED is good overall. I used the notebook to type all kinds of articles, and I did not have a problem typing for extended periods of time. The only issue that I though of was that the arrow keys were on the small side. Though these buttons aren’t used all that much, so these shouldn’t pose much of an issue. 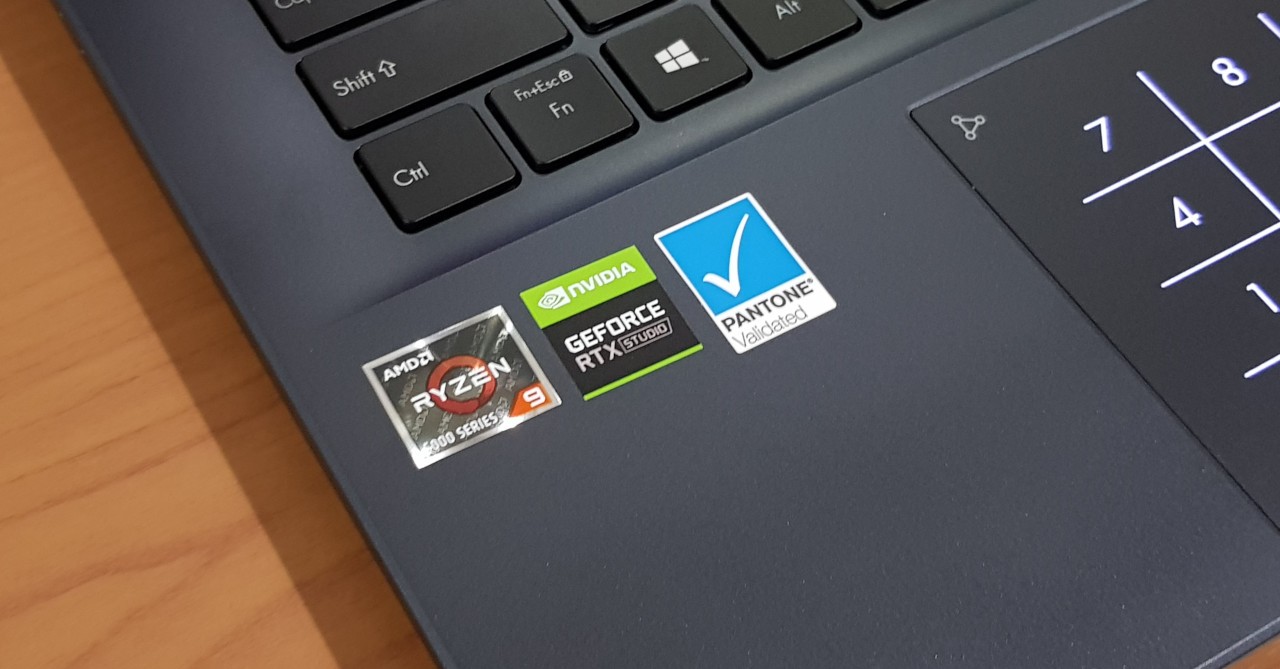 The Pro 14 OLED is powered by an AMD Ryzen 9 5900HX and an NVIDIA GeForce RTX 3050 Studio. While it is designed for productivity such as photo/video editing and light 3D work, we thought that the internals should be powerful enough to run games, so we tested it out with both esports and triple A titles. 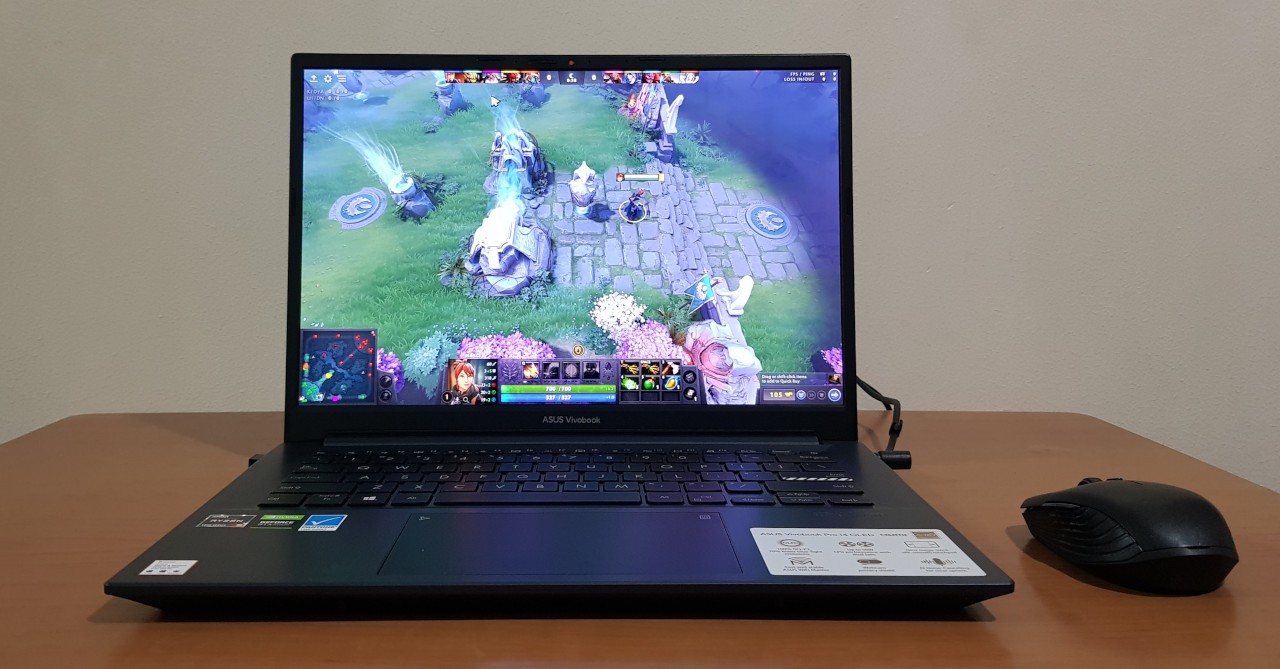 As expected given the specs, the Pro 14 OLED delivers great gaming performance for esports titles. For instance, the laptop ran Dota 2 at max setting and at the full 1800p resolution with an average of 85FPS. Meanwhile, Overwatch also ran at 1800p and at Ultra settings at an average of 75FPS, with only minimal dips to 60FPS.

What makes the laptop even better for these titles is the 90Hz refresh rate display which lets users enjoy smoother gameplay. 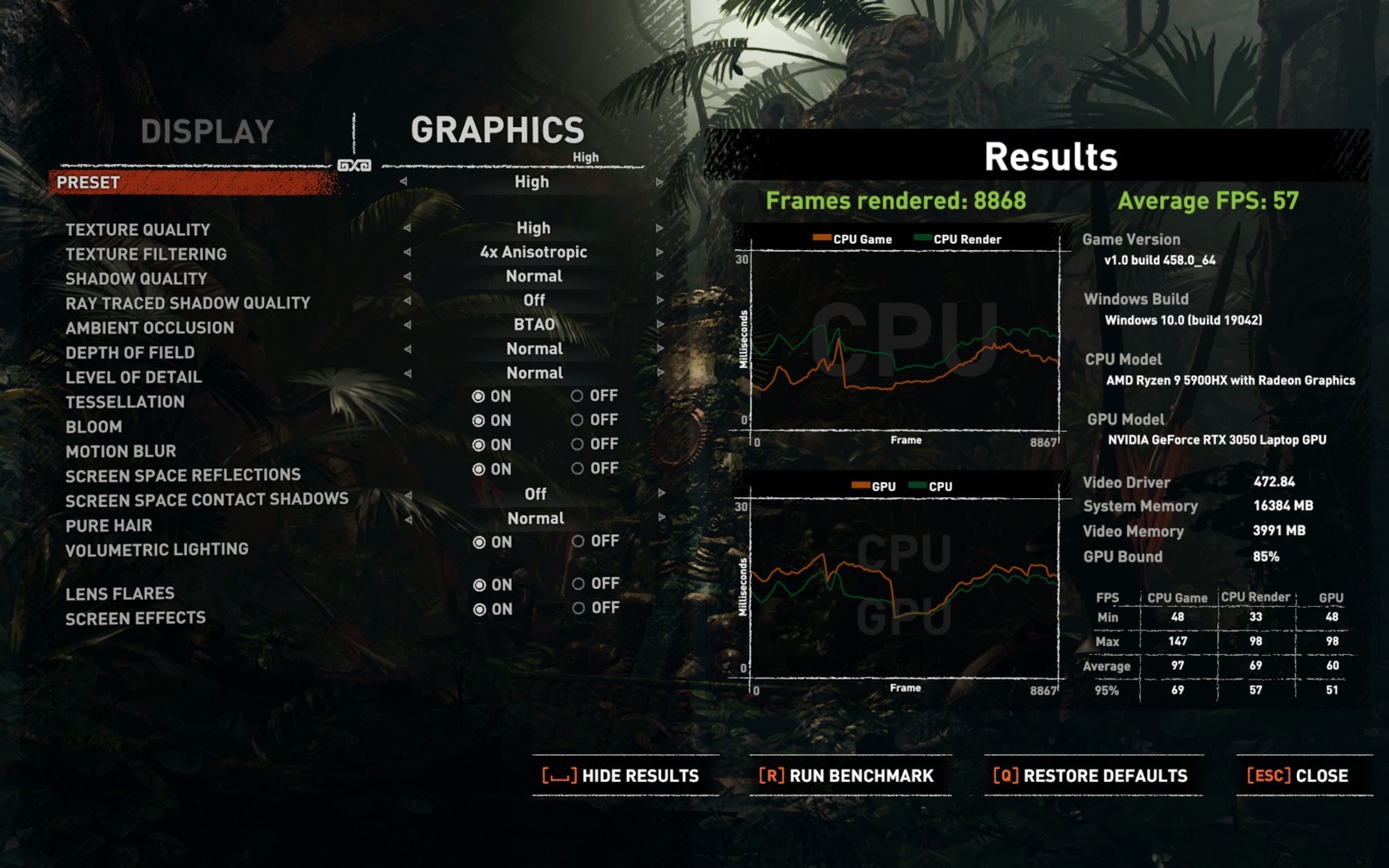 The Ryzen 9 and RTX 3050 combo also proved to be powerful enough for triple A titles. While you won’t be able to max them out, the Pro 14 OLED ran Shadow of the Tomb Raider’s in-game benchmark with an average FPS of 57 — that’s at the High graphics setting and at 1080p.

Meanwhile, here are the synthetic benchmark scores of the notebook:

The notebook’s PCMark10 score is markedly higher than the Vivobook 15 OLED that we reviewed a couple of month’s back. But what is surprising is the laptop’s 4065 3DMark Time Spy score. For comparison, it outperformed the ROG Flow X13 (without the eGPU) which scored 3499. 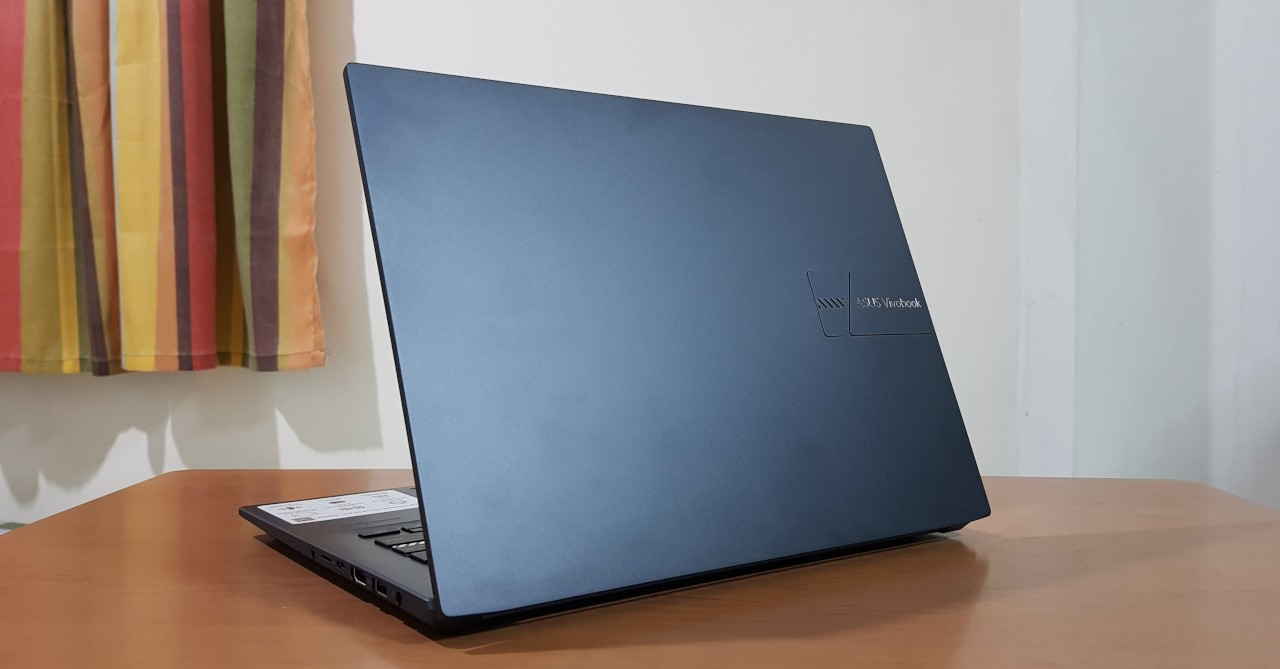 Given the laptop’s great gaming performance, it came as no surprise that the Vivobook Pro 14 OLED also delivers for general use and for productivity. The notebook easily handled photo and video editing, making it a device worth considering for content creators. While its performance won’t equal that of full-size desktop/laptop workstations, its performance is still a step above a lot of its competitors at its price point. 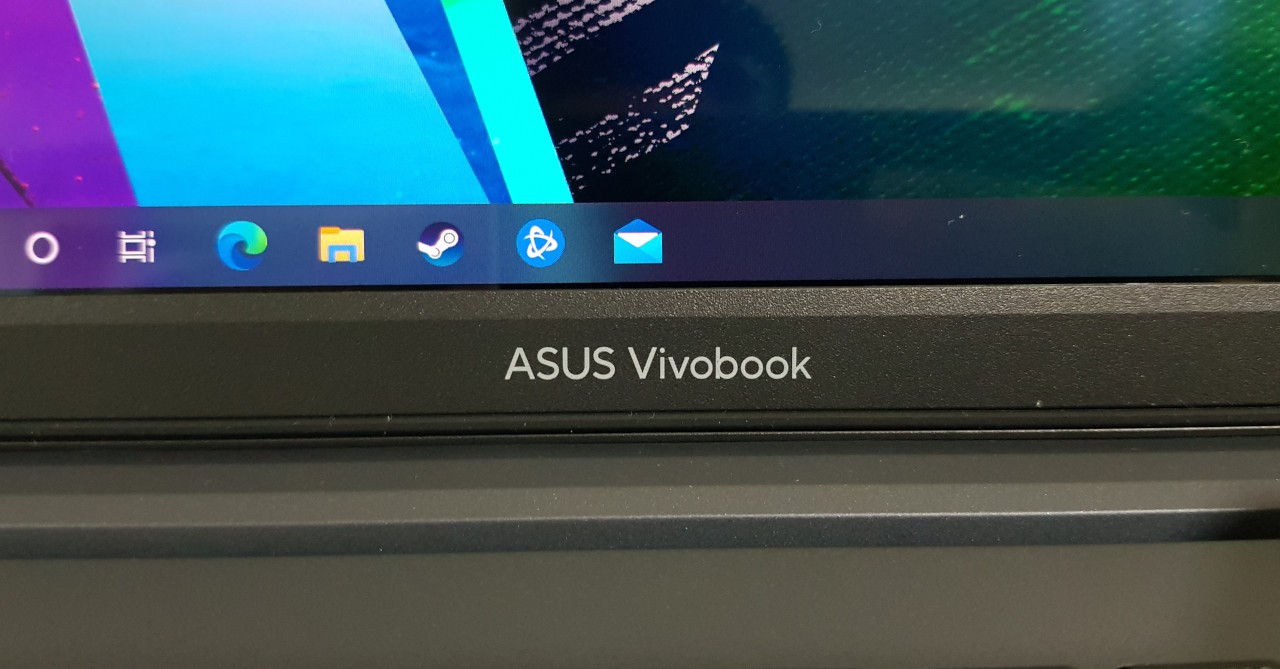 As for battery life, the Pro 14 OLED did not disappoint as expected given its Ryzen processor. After playing a 2 and 1/2 hour movie at 50% brightness and volume, the laptop still had 69% battery remaining. This means you should be able to get around 8 or so hours of general use on a single charge (your mileage may vary of course).

Before we end, the Pro 14 OLED also has a small but welcome improvement. The laptop features a physical cover for its webcam, a nice touch for added privacy. On top of this, the built in mic is also of good quality for your Zoom calls, so you won’t need an external mic if you’re in an online meeting. 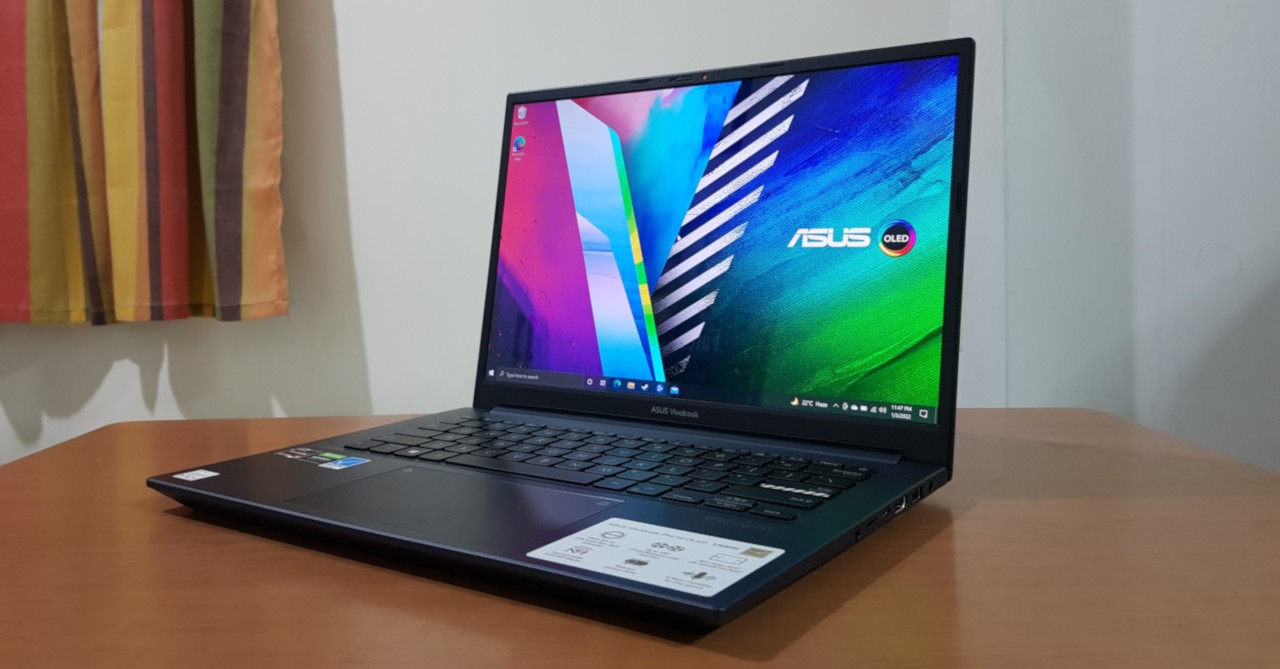 The ASUS Vivobook Pro 14 OLED is great on paper, and it delivered in actual use. The laptop has pretty much everything you need in a content creation laptop with its quality OLED display and excellent performance. On top of these, it can even run esports titles and triple-A games without issue. Overall, the Pro 14 OLED is simply a great notebook.

But is it worth the price? At PHP 74,995 for the Ryzen 9/RTX3050 variant, the Vivobook Pro 14 OLED is worth putting on your shopping list if you need a productivity laptop, especially considering that it outperforms ultrabooks at the same price bracket.