Play through all nine Skywalker films like never before in LEGO Star Wars: The Skywalker Saga

LEGO Star Wars: The Skywalker Saga is the biggest LEGO game ever, and it's available now! 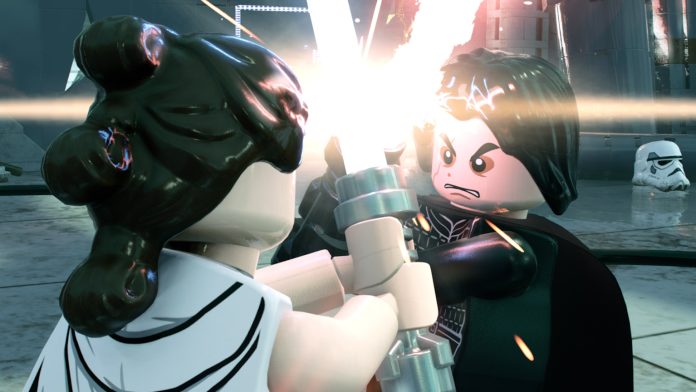 Developed by TT Games in collaboration with the Lucasfilm Games team and published by Warner Bros.

“With LEGO Star Wars: The Skywalker Saga, we are giving players an all-new LEGO Star Wars experience with the freedom to explore the galaxy like never before,” said Jonathan Smith, Strategic Director and Head of Production, TT Games. “Whether they are existing fans of the franchise or discovering it for the first time, everyone will enjoy the epic story of all nine films with all the humor and charm that LEGO games bring.”

In LEGO Star Wars: The Skywalker Saga, players can traverse space using the galaxy map on their holoprojector to chart their course through the saga, progressively unlocking planets to explore along the way. During space travel, players may engage in aerial encounters against enemy ships, piloting legendary vehicles like the Millennium Falcon, Imperial TIE fighters, Rebel X-wings, and many more. Once reaching their destination, players can choose to either continue onwards through the main story or explore and discover exciting quests and puzzles within the galaxy.

Exploration rewards players as they uncover Kyber Bricks which unlock new features and upgraded abilities across a range of character classes, including Jedi, Hero, Dark Side, Villain, Scavenger, Scoundrel, Bounty Hunter, Astromech Droid, and Protocol Droid. Play as iconic characters like Luke Skywalker, Rey, Obi-Wan Kenobi, Finn, BB-8, Leia, Yoda, Boba Fett, Darth Maul, Poe Dameron and over 300 more unlockable characters from across all nine films in free play mode to create fun, new adventures. Whether it’s the jungle moon of Ajan Kloss, the city-covered planet of Coruscant, the idyllic grassy hills of Naboo, or the desert dunes of Jakku, the LEGO Star Wars galaxy is available to discover and play in.

“LEGO Star Wars: The Skywalker Saga is the ultimate video game experience that allows generations to play together in the galaxy far, far away,” said Douglas Reilly, Vice President, Lucasfilm Games. “Players can explore all nine films from the Skywalker saga, bringing a whole new level of fun and humor to the greatest LEGO Star Wars adventure yet.”

“LEGO Star Wars: The Skywalker Saga contains a massive amount of content combined with the unforgettable gameplay that make LEGO games appealing to audiences of all ages.” said Sean McEvoy, Head of LEGO Games, The LEGO Group. “It is a fun and accessible entry point to the Star Wars galaxy where kids and families can join forces and explore the galaxy together.”

The LEGO Star Wars: The Skywalker Saga Standard Edition is available for $59.99 (SRP). The LEGO Star Wars: The Skywalker Saga Deluxe Edition is available for $69.99 (SRP) and includes the base game, Character Collection (Season Pass), and physical retail versions will include an exclusive LEGO Star Wars minifigure, Luke Skywalker with Blue Milk. The Character Collection contains seven downloadable content (DLC) packs with playable characters from across the galaxy including many from outside the nine saga films. The DLC packs include The Mandalorian Season 1, Solo: A Star Wars Story, The Classic Characters, The Trooper Pack, Rogue One: A Star Wars Story, The Mandalorian Season 2, and The Bad Batch.

This article was written in partnership with Warner Bros. Games.