This promo will only be available from May 6 to 8. 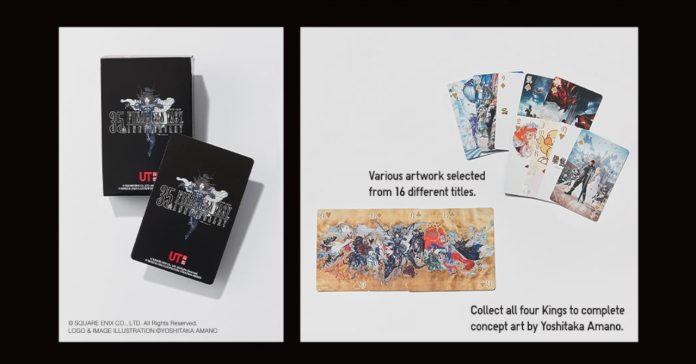 Following the announcement of its release in the Philippines, Uniqlo has announced that Limited Edition Final Fantasy playing cards will given away for free when you purchase two or more Final Fantasy graphic tees.

Specifically, for every purchase of two or more Final Fantasy graphic tees, a set of cards will be given to the customer for free. This promo will only be available on purchases made from May 6 to 8 at the Uniqlo Manila Global Flagship Store, Glorietta 5 and the official Uniqlo Online Store.

As a celebration of the series’ 35th anniversary, the playing cards feature artwork selected from the 16 mainline Final Fantasy titles. All four King cards in the game also form to complete concept art by Yoshitaka Amano.

Here’s a look at the Final Fantasy 35th Anniversary playing cards from Uniqlo: Take note though, unlike in Japan, the free playing cards set in the Philippines will not come with the special box.

In case you missed it, here’s a look at the 16 graphic tees in the Uniqlo x Final Fantasy collection:

The free playing cards set will only be available for purchases from May 6 to 8, 2022. For more info on the promotion, visit the official Uniqlo website.

- Advertisement -
Previous articleHere are the movies and shows coming to Netflix Philippines this month
Next articleEmbracer Group to acquire Crystal Dynamics, Eidos, and Square Enix Montréal