The MateBook 16s is definitely a great productivity partner! 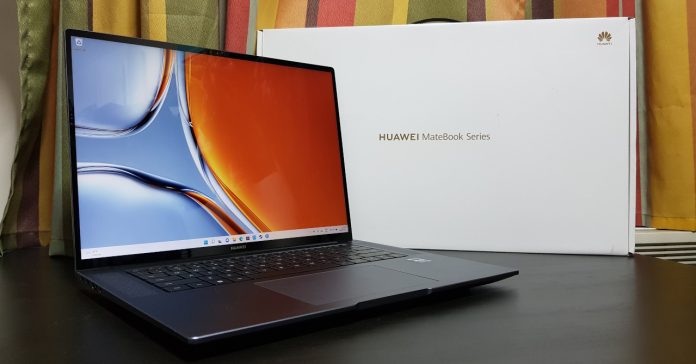 Ahead of the launch, we actually got to try out the MateBook 16s. In our first impressions article, we shared that the new MateBook is a promising laptop thanks to its specs, as well as its display.

The new MateBook is powered by a 12th Gen Intel processor, and has 16GB of RAM with 1TB of storage. While that’s already impressive on its own, for us, the highlight of the new laptop is its large 16-inch display. 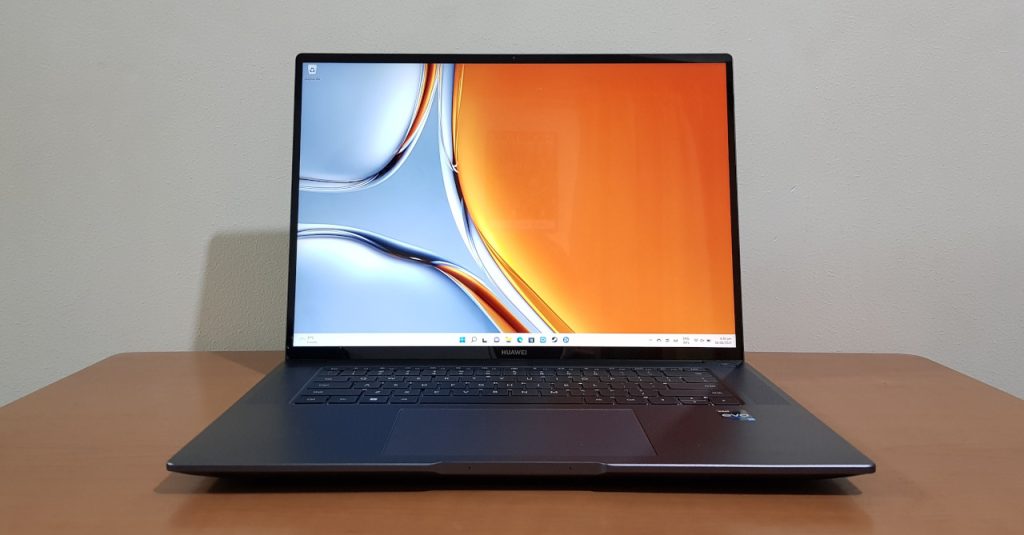 Specifically, it packs a  2,520×1,680 IPS display with a 3:2 aspect ratio, making it much larger than typical ultraportable Windows laptops.

While it’s an impressive laptop in our initial time with it, does the MateBook 16s deliver enough for us to recommend it? Here’s what we think in our review! 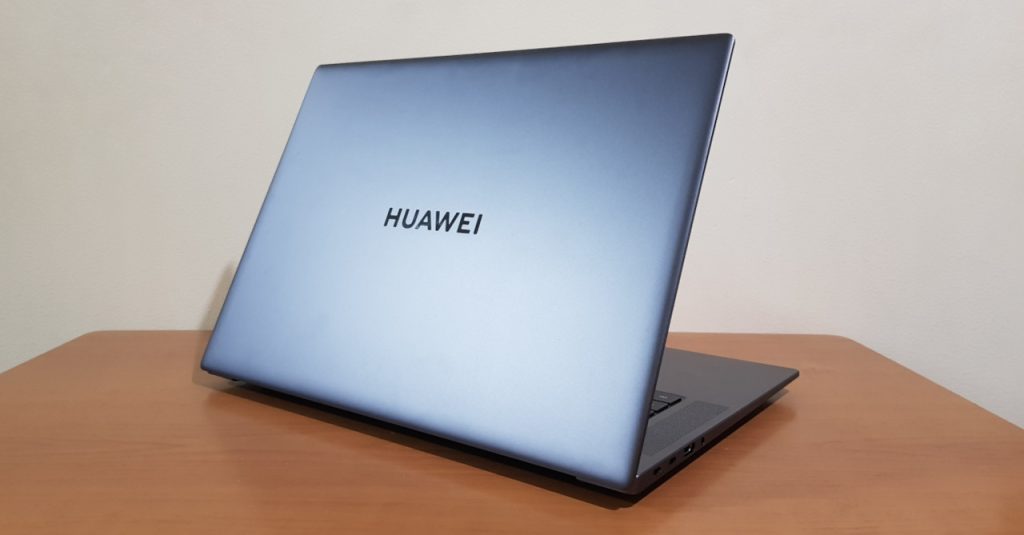 To start, let’s take a look at the laptop’s design. The MateBook 16s shares a similar look with previous Huawei laptops such as the MateBook 14 from last year, only it is much bigger. This 16s also features a sleek and subtle look, with the Huawei logo being the only thing on the laptop’s cover.

Thanks to this sleek look, the MateBook 16s fits perfectly in an office setting, and it won’t stand out too much in a cafe (except for its size that is). If you do want to add some more personality to the laptop, its cover is a great canvas for putting stickers on. 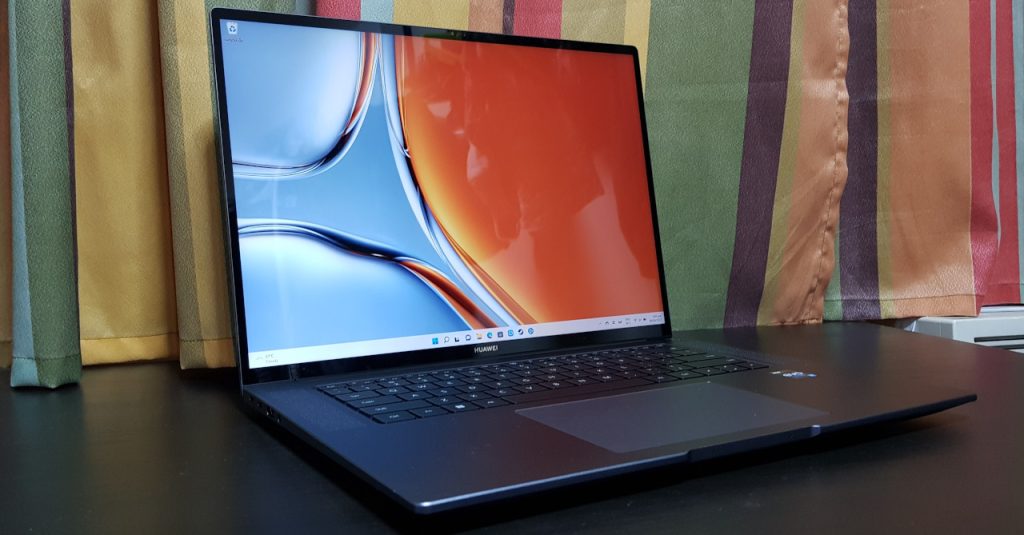 Moving to the front, you have the MateBook 16s’ large display which has slim bezels for a more modern look. Inside, the laptop has the same color as the cover, and it is built with the same metal construction.

One thing to note about the MateBook 16s is that it’s much bigger than it seems in photos. It’s also a bit heavier than a typical ultraportable. Though the added screen real estate is great for productivity as you won’t have to strain your eyes to see those tiny cells in Excel.

Also, even if it’s big, the 16s is still fairly portable. It’s still not as heavy as a typical gaming laptop, meaning you won’t break your back if you decide to bring this laptop outside.

Given its size, a dedicated SD card reader and maybe an extra USB-A port would’ve been nice. But for most users, these ports should be sufficient. 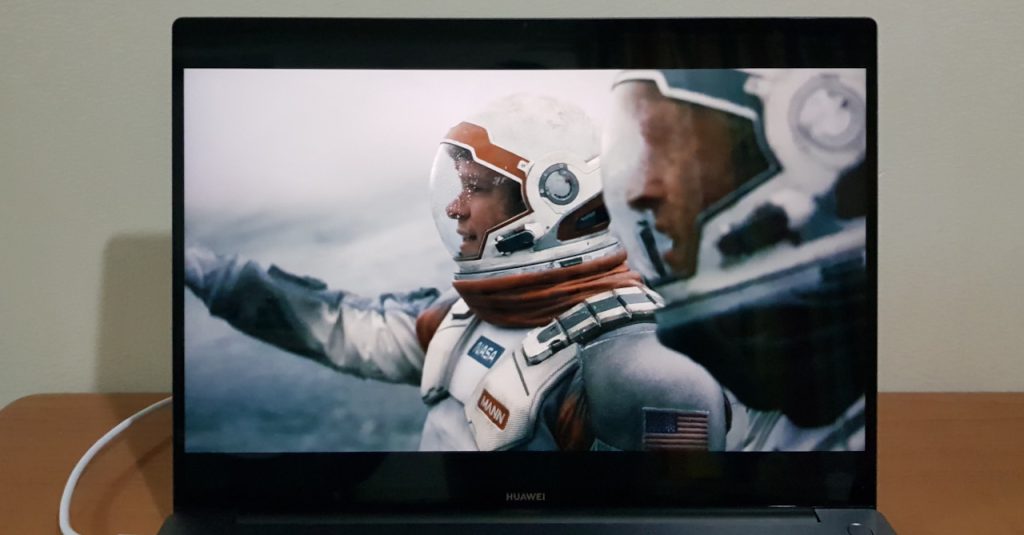 Thanks to its large size, the MateBook 16s’ screen is a great partner for binge-watching, even more so than other laptops. You truly feel the size difference here when watching movies or shows, especially when compared with 14-inch laptops and below.

One thing to note is that the screen of the laptop is an IPS LCD, not an OLED. This means the blacks aren’t as deep as OLED screens. Though color reproduction and brightness should still be satisfactory for most users. Also, the 3:2 aspect ratio means you’ll get black bars for most movies/shows, but this shouldn’t be too distracting. 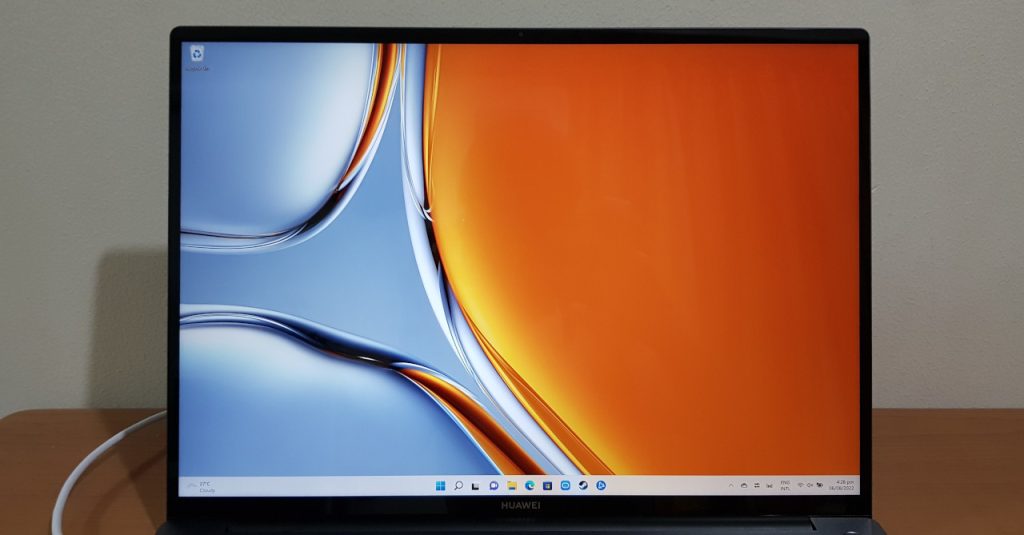 Binge-watching aside, the display shines for productivity as the added vertical space coupled with the large size makes this a dream to work on. If you’re used to small laptop displays, you’ll love the work experience here as a higher-res screen that’s larger lets you see more of what you’re working on, whether it’s a document or a video.

On top of this, the screen is also a touch display, meaning you can opt not to bring a mouse with you while outside for work (unless you need to edit some photos/videos of course). 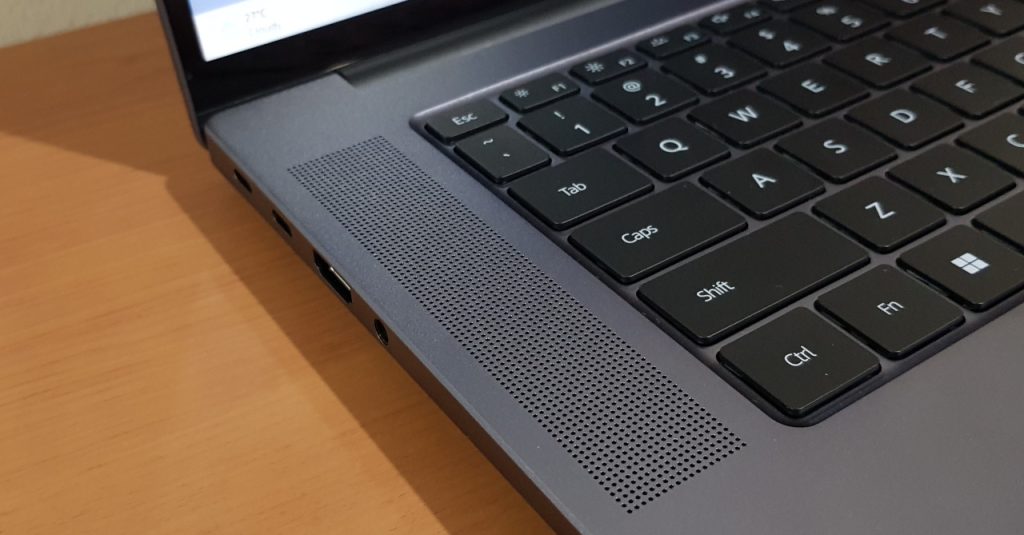 The new Huawei laptop packs stereo speakers that are placed on the side — similar to the 16-inch Macbook. Thanks to this, the laptop’s speakers get loud and have good quality to boot. In fact, they beat out most of the productivity laptops that we’ve tested, as most other notebooks have bottom-firing speakers.

These speakers are great not only for media consumption, but also for conference calls. Even without a headset, you can hear whoever you’re in a meeting with clearly. Plus, the laptop’s built-in mic is also of good quality, meaning your voice should be loud and clear for online meetings. 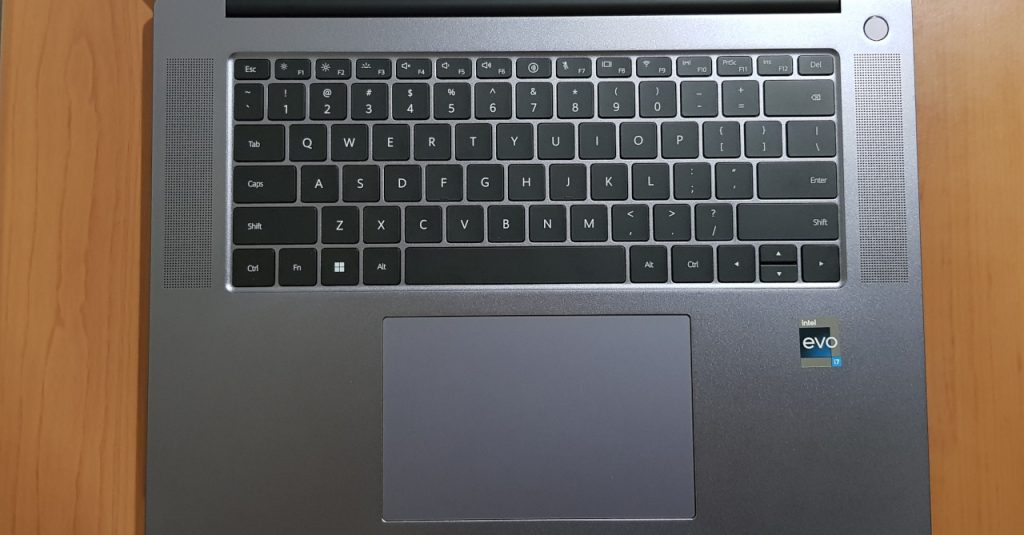 As the speakers are on the side, the MateBook 16s does not have a number pad. This is the only real drawback of the laptop’s keyboard though as it’s one of the best keyboards we’ve tried for Windows productivity laptops.

Thanks to the high 1.5 mm key travel, the keyboard feels satisfying to type on. The keys are also spaced well, meaning typing thousands of words on it won’t be a problem. Plus, the keyboard has a white backlight so you can still easily type if you’re in a dark environment. 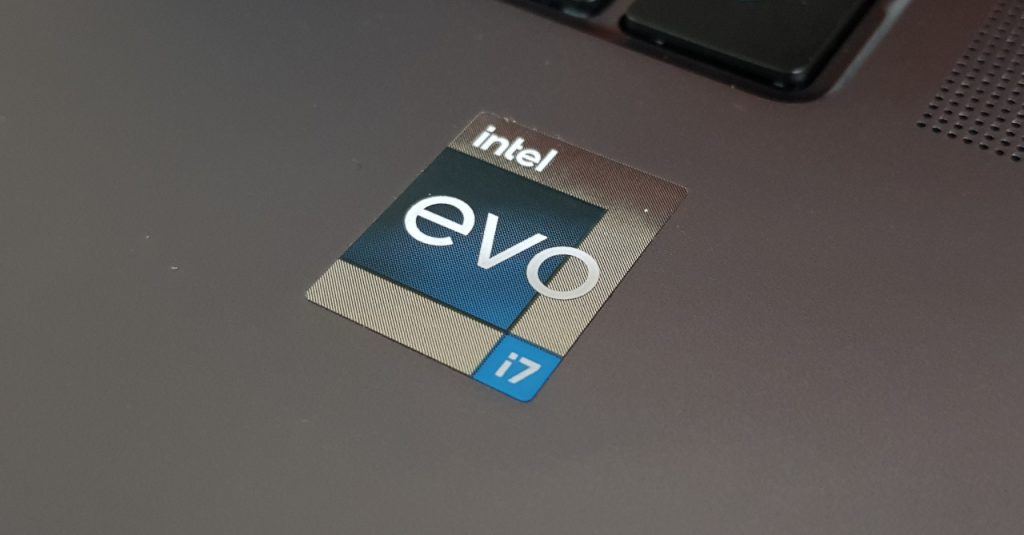 The new MateBook is an Intel Evo laptop that’s powered by a 12th Gen Intel Core i7-12700H. This isn’t the first time that we’ve tested an i7-12700H as we actually reviewed that processor earlier this year.

We were impressed with its performance in a gaming laptop, but what about in a productivity notebook? Before we tested out its capabilities for productivity, we wanted to see how it will perform for gaming, especially in a laptop without a dedicated GPU.

We ran some esports titles and some less hardware intensive older games as the lack of dedicated graphics means this is not designed for triple-A gaming.

In our tests, we found that the i7-12700H with Iris Xe graphics has enough power to run today’s popular esports titles, even at the native 2,520×1,680. For example, Dota 2 ran at around 80FPS on the High graphics setting. Overwatch also ran at High and at 1680p with an average FPS of 70.

Meanwhile, here are the benchmark scores of the MateBook 16s:

The 3DMark benchmark scores show that the laptop is great when compared with other laptops with only integrated graphics. Meanwhile, the Time Spy test shows that the MateBook 16s is capable of playing games like Apex Legends at 1080p. 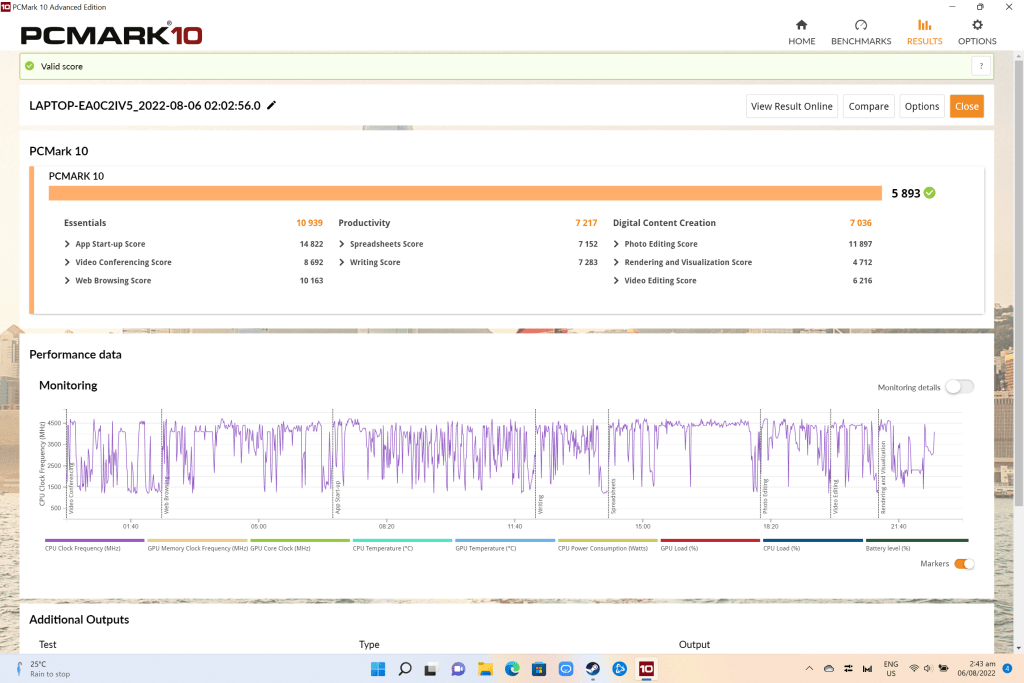 Meanwhile, the PCMark10 score indicates that the laptop is a strong performer for daily productivity and even some content creation workloads. 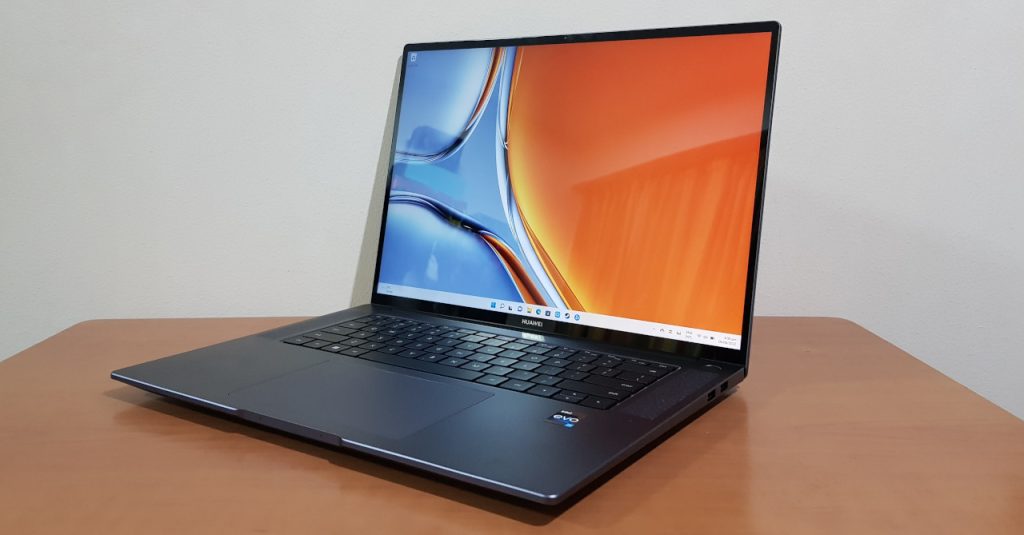 Our test of the Huawei MateBook 16s for daily use and productivity reflected the benchmark score. In our time with it, the MateBook was fast and snappy, whether it was opening documents, PowerPoint presentations, and even photo/video editing.

Of course, the lack of dedicated graphics means the MateBook 16s won’t be as fast for rendering or converting videos. But for most users who aren’t heavily into video production or 3D work, the MateBook 16s should have more than enough power.

What it also has aside from performance is great connectivity with Huawei devices. Thanks to its suite of Huawei Share features, collaboration and file transfer with a Huawei smartphone or tablet is fast and incredibly easy. Though even if you don’t have a Huawei device, this laptop is still a Windows notebook, meaning you will still have good connectivity for pretty much all common phones/devices.

As for battery life, the MateBook 16s does not disappoint. Even with its large touch display with a high resolution, the laptop managed to perform well in our test.

After running a movie for 2 and 1/2 hours at 50% brightness and settings, the laptop still had around 68% battery remaining. This should make the laptop good for 6 or so hours of use, depending on how you use it. 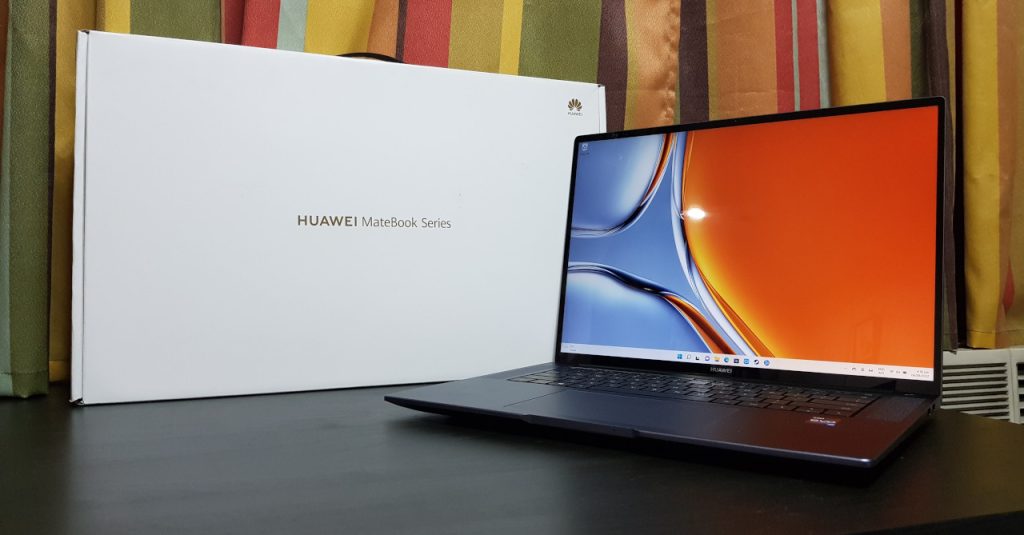 Thanks to its nice design and good performance, the Huawei MateBook 16s won’t disappoint as a productivity partner. But its key feature is no doubt is large 16-inch touch display.

As it’s much bigger than other ultraportable Windows laptops, it has the advantage for home use as you likely won’t seek out a bigger monitor for your home office setup. Plus, even if it’s a big laptop, it’s still quite portable — great if you need to bring the laptop with you in the office or at a cafe.

Overall, if you’re in the market for a laptop with a big display, the MateBook 16s is for you. While it’s quite pricey at PHP 89,999, it’s tough to beat it if your priority is good performance and a large screen that’s built for productivity.

And if you’re a Huawei smartphone or tablet user, this laptop is an even better deal thanks to its Huawei Share capabilities.