Final Fantasy XV is here and the Ultimate Collector’s Edition is what dreams are made of! 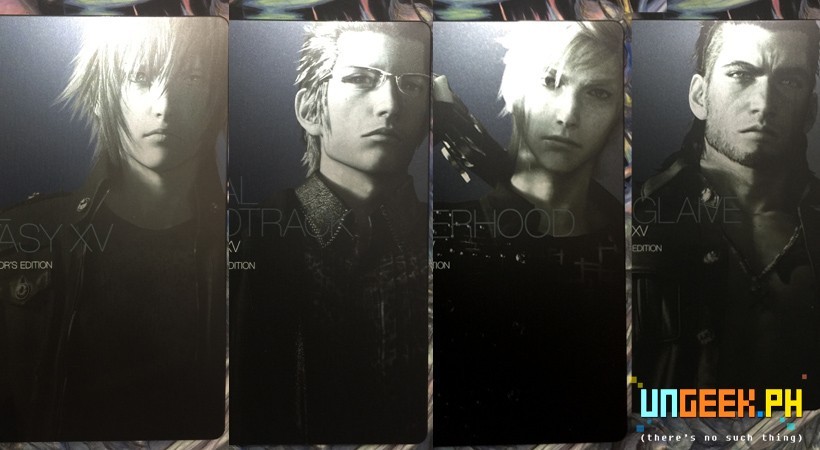 November 29 has passed but the Ungeek team is still on a Final Fantasy XV high! We’ve shown you the full achievement list for the trophy hunters out there and we’ve also brought you our coverage of the day 1 release hype that took the metro by storm. Ungeek has also unboxed the droolworthy FFXV “Luna Edition” PS4 Slim and we have not gotten to fully play the game yet just because we couldn’t take our eyes off of it! Being the total geeks that we were, we had to get our hands on anything and everything FFXV related and to round it all up, we’re bringing you the Ultimate Collector’s Edition of FFXV! Go grab a tissue or a towel folks and get ready to wipe the drool from your face as we take you through the unboxing of arguably one of the best collector’s editions to date.

First off, let me just say that the packaging is just beautiful. The outer packaging shows off the 4 main protagonists of the game slapped onto a shiny surface that you can practically use as a mirror! We honestly had a hard time taking pictures of the outer box as it reflected everything we put in front of it. If the box in itself is already a keeper, you can be assured that the contents inside would not disappoint.

As you open the box, you are then greeted with… ANOTHER BOX! This time, a matte black box or rather a container with “XV” etched on the front part. This container holds the 2 main contents of the UCE, which we will get to. Beware though, this inner container is quite thin, so excessive drooling will certainly damage the goods.

The first major part of the UCE is the Play Arts Kai variant of Noctis, the main protagonist of FFXV. If you were lucky enough to have ordered the other 3 from various retailers, then this is the last piece to complete your collection. The Noctis figure comes with a fully poseable figure along with options to change hand poses and weapons, letting you pose Noctis as a sword or a spear wielding hero. Unlike the retail versions of the other 3 figures, this version does not come in the usual action figure box but it does sport a container of its own.

The second major part, and our favorite, would be this beautiful box draped in trademark Yoshitaka Amano artwork. This is truly a sight to behold and pictures don’t even do it justice, you have to see this in person to really appreciate it. As you open up the box by flipping the lid (magnetic lid! snaps back into place!), you are finally treated to the coup de grace, 2 steel cases holding the game, the Kingsglaive movie, the Brotherhood anime series, and the soundtrack, along with a hardcover artbook.

The steelcases are unique to the Ultimate Collector’s Edition, sporting back to back images of Noctis, Ignis, Prompto, and Gladiolus in a sleek and shiny package that you cannot get anywhere else.

The FFXV Ultimate Collector’s edition retailed for 270$ on the Square Enix website and it sold out almost immediately after it was first announced, prompting manufacturers to create more of these to meet the demand. Local retailers sold these in very limited stocks at 17,000php, which already factored in additional fees such as tax and shipping. Were you one of the lucky ones who got a copy of this highly coveted collectors item? Let us know your thoughts about the collectors edition and anything Final Fantasy XV in the comments below! In the meantime, we’ll crawl back into our caves and hibernate for the next few months as we drown ourselves in FFXV.

For more Final Fantasy XV Stories, check out our previous articles below:

- Advertisement -
Previous article
Sayōnara… Life-size Gundam Statue in Tokyo will be Removed Permanently
Next article
Get All Your Korean Drama Fix On-Demand for FREE! Viu Just Launched in the Philippines!