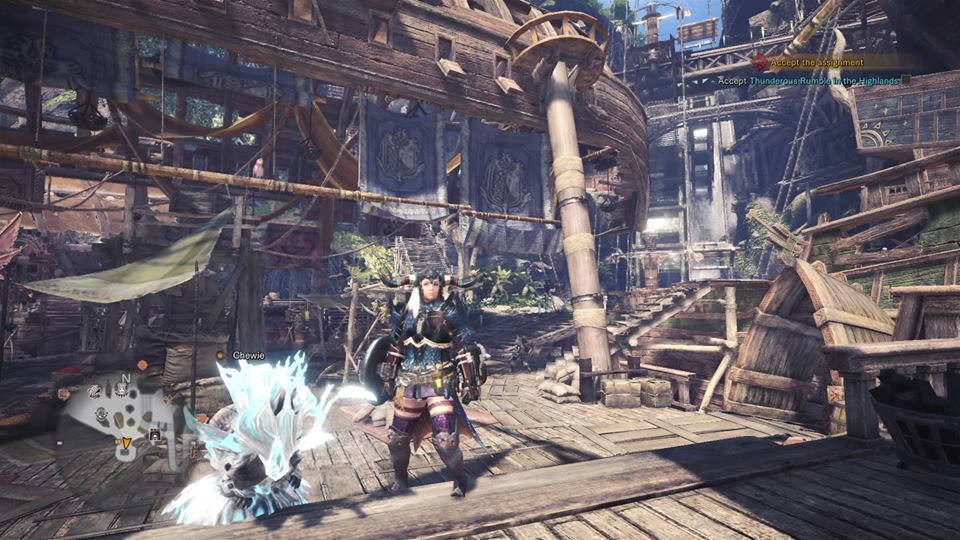 Greetings hunters! How’s the world of Astera treating you? So far so good? For those peeps having a hard time with the game, allow me to share my absolute favorite support armor sets that I am rocking in high rank and tempered quests right now. Not only will these sets be a god-send for your comrades, they are actually very fun to use!

Keep in mind that this is High Rank gear that utilizes some end-game stuff, so if you don’t want to be spoiled you might want to finish the game first and get back here when you’re done…

Still with me? Ok good so without further ado, let’s start with the first one which is a full-support build using the Hunting Horn:

That’s the armor above you. Take a look at that monstrocity!

From what I’ve noticed – like in previous games, the Hunting Horn is not getting the love that it deserves in the series. As of this post it is currently sitting at the bottom of the weapon usage charts in the game. Clearly something has to be done… 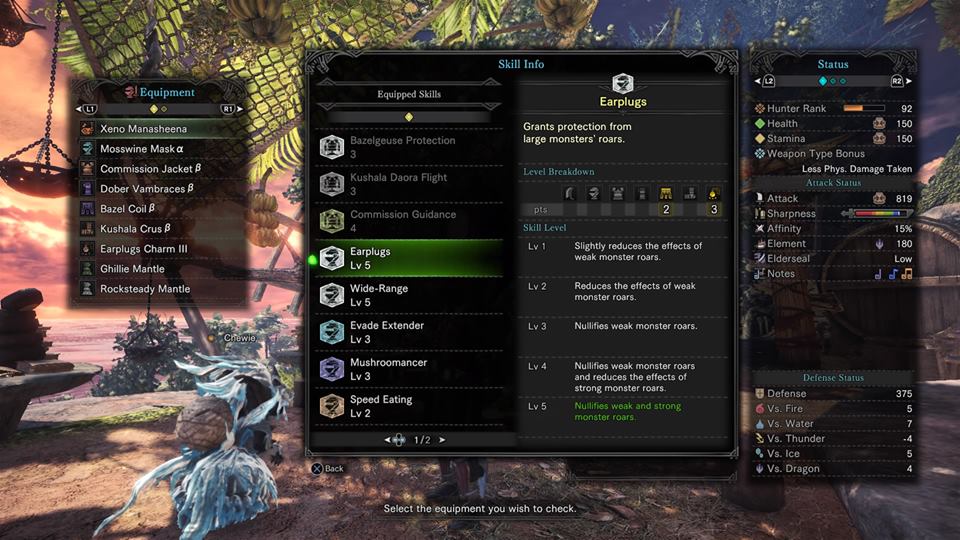 After much min-maxing (I still need some sullied stones and a free meal deco though) here’s the armor pieces and skills that I got and some notes on why I think it is essential for this build:

Wide Range takes center stage in this set, not only does it provide the best support skill in the game (shared restoratives whenever you consume pots), it also goes well with mushroomer and speed eating. So not only are you giving out buffs as quick as you can press the square button, aside from the potions and mega potions at your disposal, you also have a wide variety of shrooms to choose from. Don’t believe me? Here’s the list: 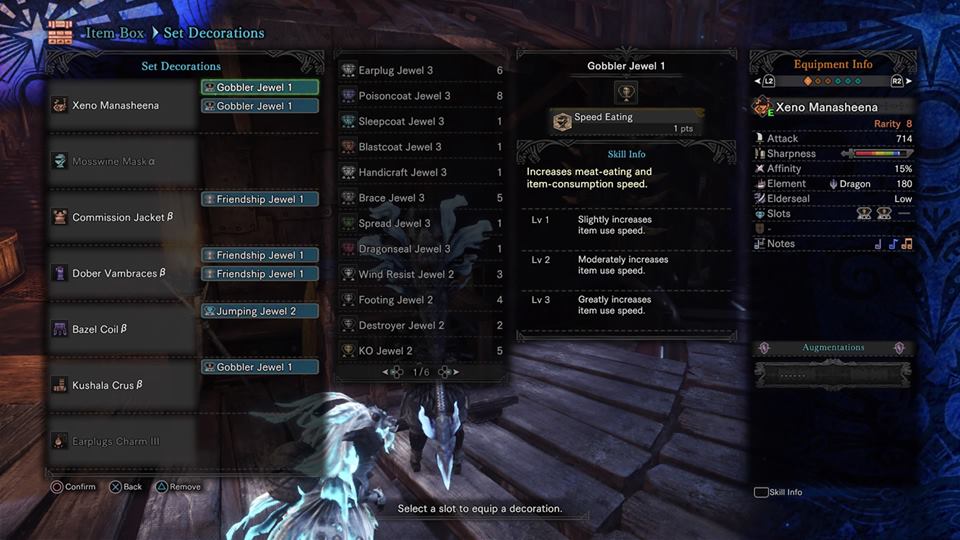 And here are the decorations I used to finish the set.The other skills like earplugs and evade extender compliment the set in terms of uninterrupted support and spacing with the enemy, respectively. Finally, the last important skill for this set I want to talk about (not shown in the image above) is the horn maestro which basically extends the duration of your songs. For the Hunting Horn you can use any 2 slotted HH that suits you. I personally use the Xeno Manasheena because the set of buffs they give out are some of the best and most-used in the game. Come on, who wouldn’t like Attack and Defense Up Large, Defense Up XL, and Stamina Reduction in one go? Still not convinced? Aside from that it also has All Wind Negate, for those who are having trouble with Kushy D.

To those who want to improve on this set, if you have it I suggest using a sullied stone to add an extra deco slot for the free meal skill. It’s not as ground-breaking as the other skills but it has a 25% chance that your consumable items with have an extra bang for it’s buck. 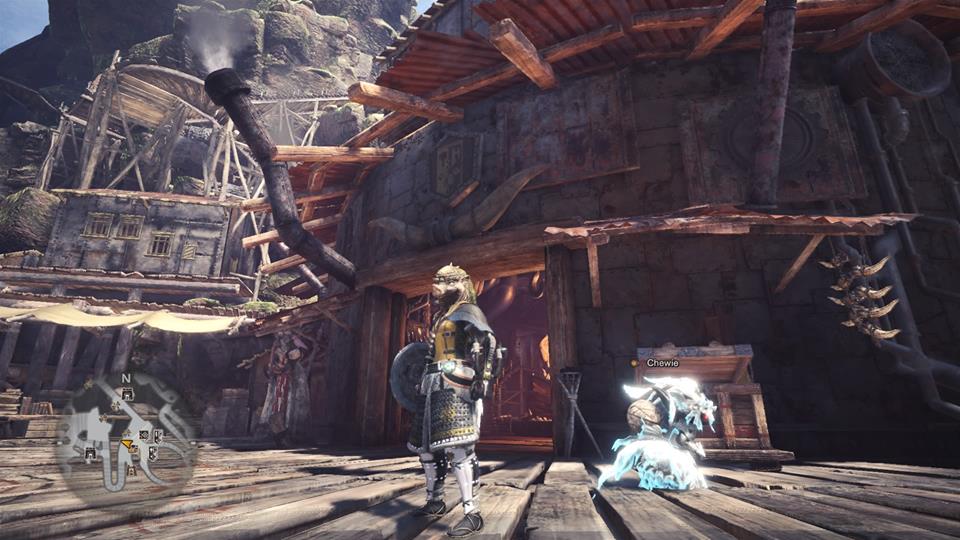 As awesome as this set is, I still have one more mixed set up my sleeve which is “a blast” to use when with a focused group of hunters. I present to you my Sleep-Bomb SnS Support build! 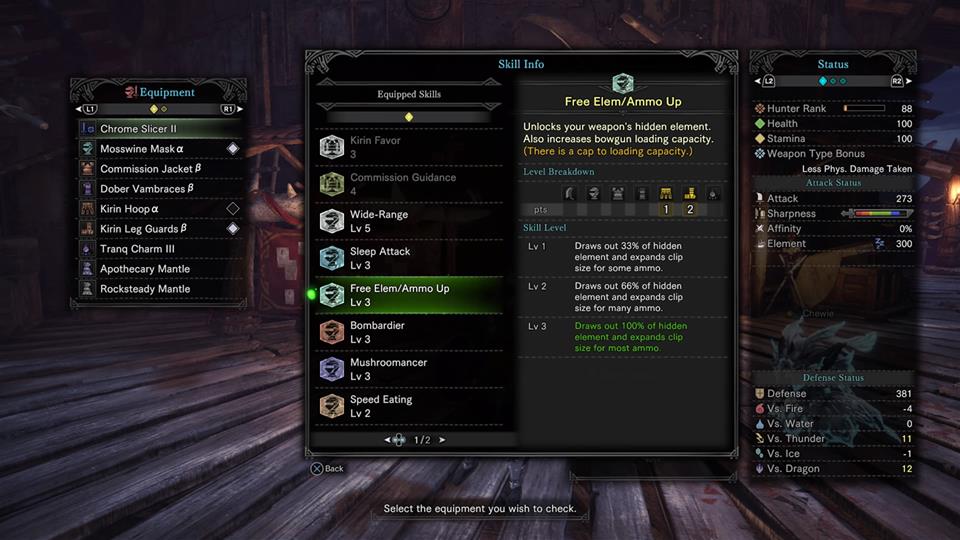 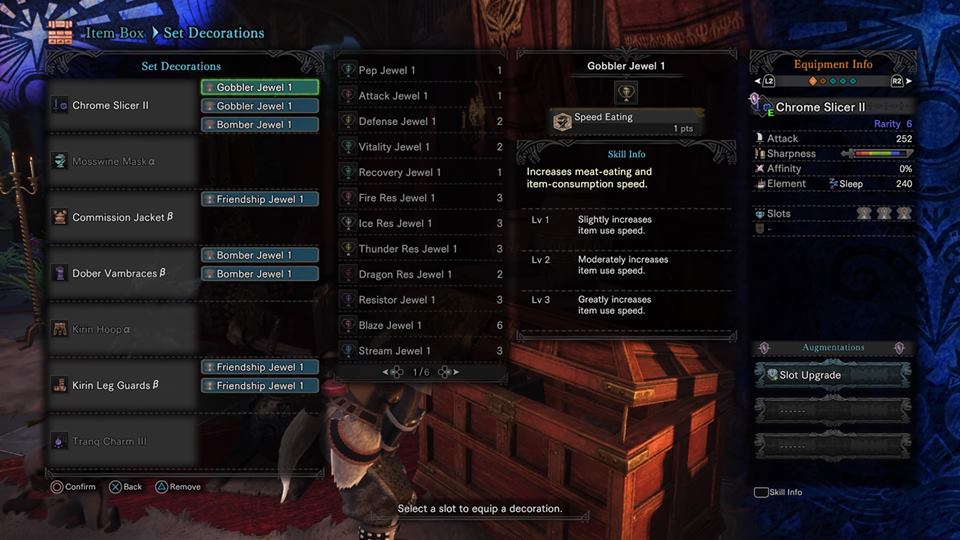 This is based on the same mold as the armor set above. I essentially traded earplugs, horn maestro and evade extender for free element, bombardier and sleep attack. The build is much more offensive in nature because of the Chrome Slicer II Sword and Shield (augmented with an extra slot) – the best sleep sword in my opinion… Courtesy of the skill free element which “awakens” the status effect.

So it is basically like this… Pop in an apothecary mantle and build up the sleep status with your SnS. The weapon is naturally able to hit fast enough so that you can land the Z’s in no time (oh yeah, it is a good mounting weapon too!). When the bugger gets to dreamland drop the Mega Barrel Bombs on its head and light it up with a small barrel bomb.
If you are with the right squad, make sure that they bring some MBB’s as well for maximum damage, just make sure that you are the one igniting the barrels to trigger your bombardier skill. 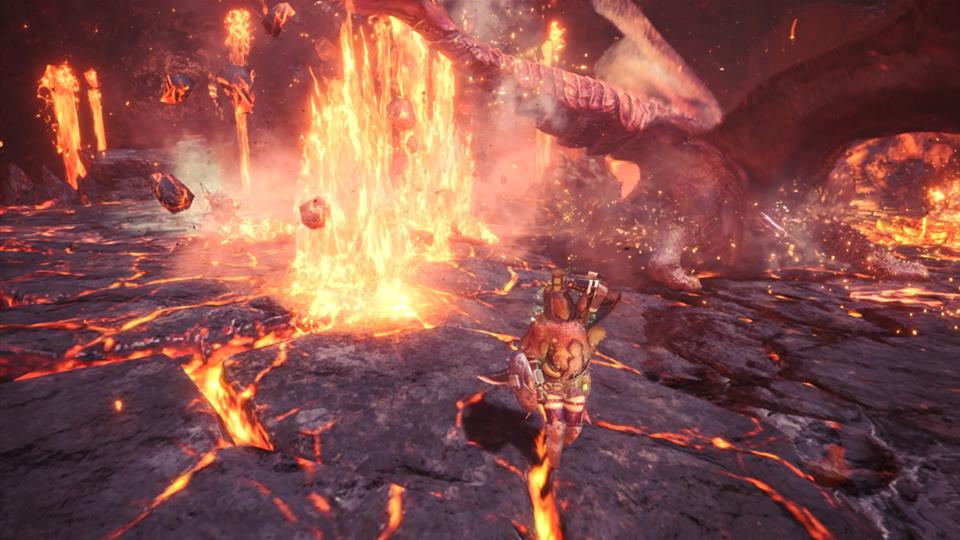 If that’s not enough for yah, the build can play a great support role as well! One of the best features of the SnS is the ability to chug in pots while the wielding the weapon. So even if you are in attack mode, it is just as easy to heal and buff your teammates via our very reliable Wide Area-Speed Eating-Mushroomer trifecta. 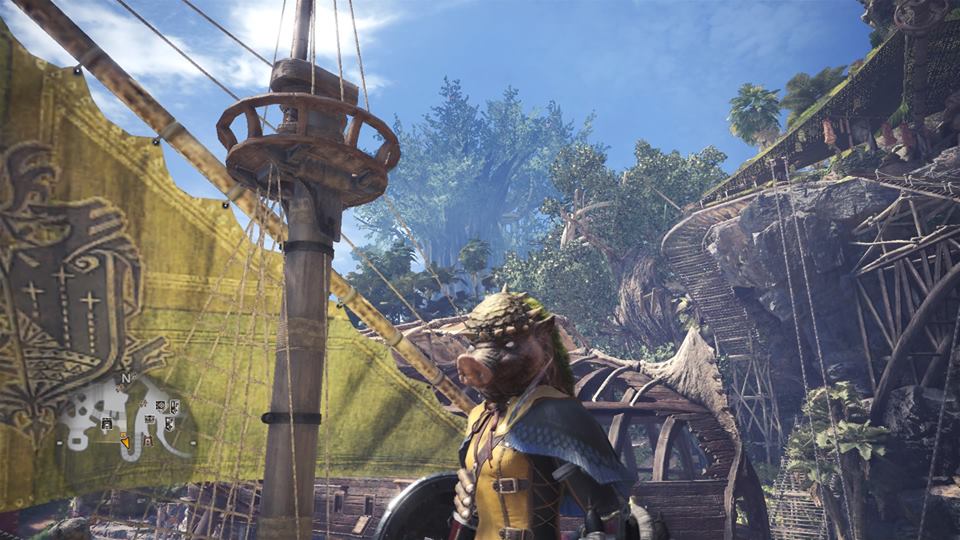 With some map awareness and practice, Your group has a great chance to never cart nor faint ever again!

So that’s about it for now! As good as this armor sets are, in Monster Hunter no build is ever perfect. These sets are made with a four-man team in mind. Though the mix is definitely viable in solo play, its real potential will really shine with a full compliment of players. How about you guys? What are your favorite armor sets for Monster Hunter World? Think you can make a better one that this? I’d love to hear it so chime on in and see you on the hunt!