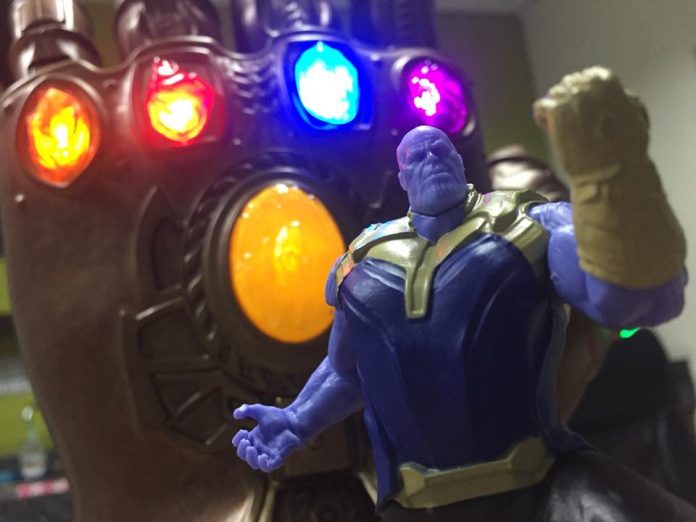 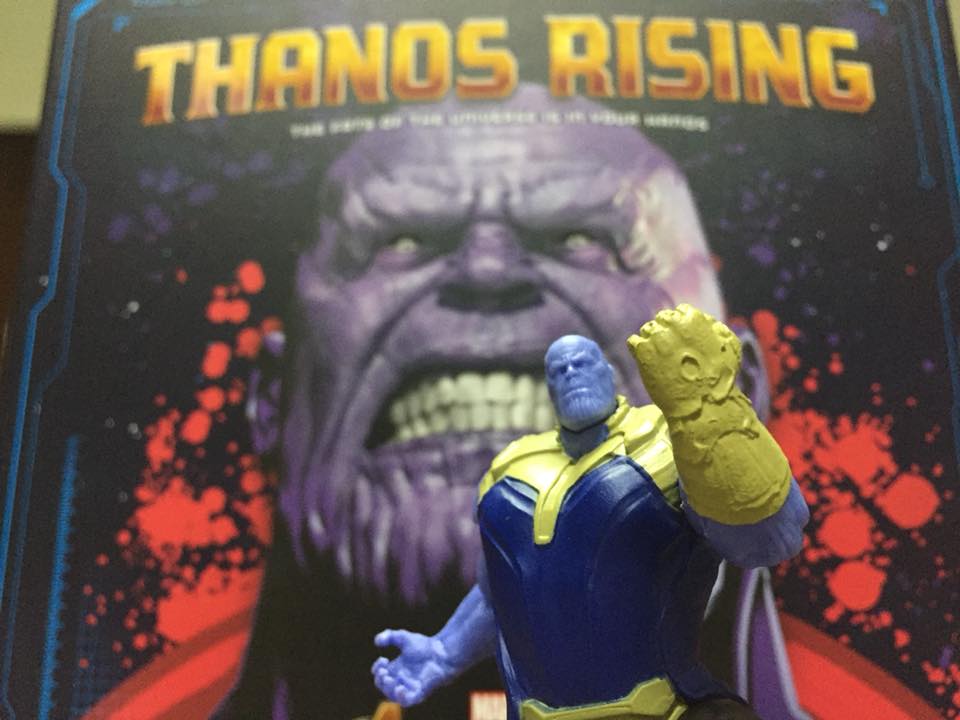 “When I’m done, half of humanity will still exist. Perfectly balanced, as all things should be.”

It’s been more than a week since Avengers: Infinity War screened in cinemas (spoiler-free review here) and I have to say, I still have that Marvel fever lingering inside of me. Let’s face it, who among you has seen the movie more than once? It is that good of a flick.

Recently a friend of mine from the U.S. brought a copy of this unheard of game (well at least on my radar, not even a blip) called Thanos Rising: Avengers Infinity War. Seeing that this is a board game based on a popular IP, I was hesitant at first because of the initial gut-feeling that they might be releasing this title just to ride the hype-wave of the most anticipated movie of 2018. Still I gave it a chance.

Will this scratch the Marvel gaming itch that we fanboys/fangirls so desperately need? Let’s take a look. 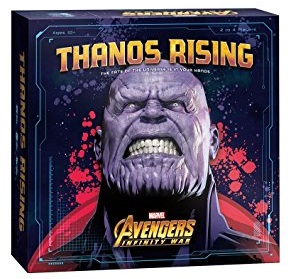 Designed by Andrew Wolf and published by USAopoly, Thanos Rising: Avengers Infinity War is a fully-cooperative game for 2-4 players where you and your friends are pitted against the Mad Titan Thanos himself. At its very core this a dice-matching with similarities to Yahtzee, Elder Sign and King of Tokyo where you use those dice to recruit heroes (effectively making your team function better), or defeat a set number of villains – which is the only victory condition for the players.

Don’t expect this to be a cake-walk though, because our main baddie has three ways to lay waste upon our heroes and ultimately succeed in his diabolical scheme. If at any point Thanos wipes out an entire players roster, defeats 10 hero cards, or collects all 6 infinity stones then the game is immediately over. Sounds fun, right? 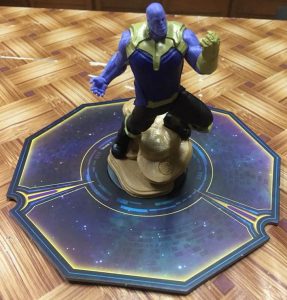 Setup is pretty straightforward. Place the sector ring in the middle of the table with the Thanos figure facing one of the 3 random areas. 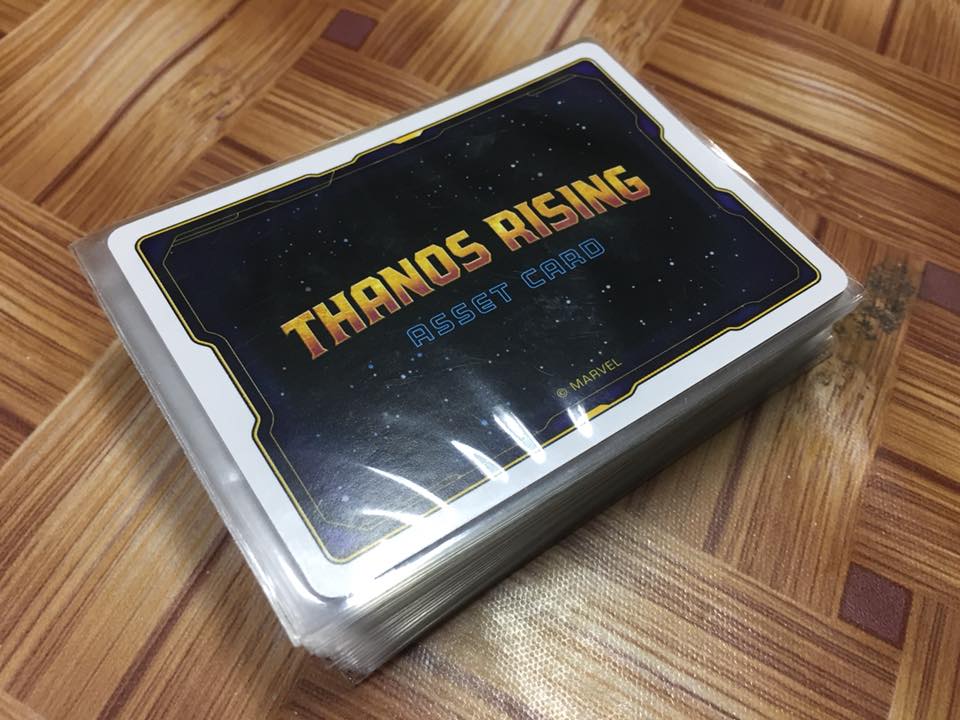 Shuffle the Asset card deck and deal 3 cards to each sector. 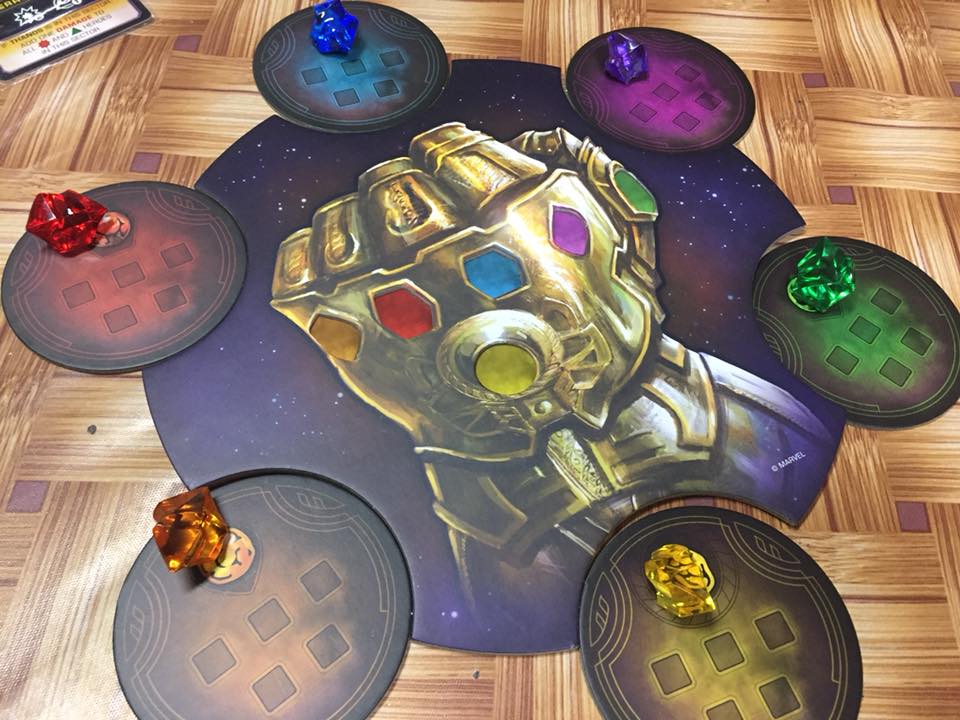 Place the Infinity Gauntlet board and all its matching tokens and gems near the play area. 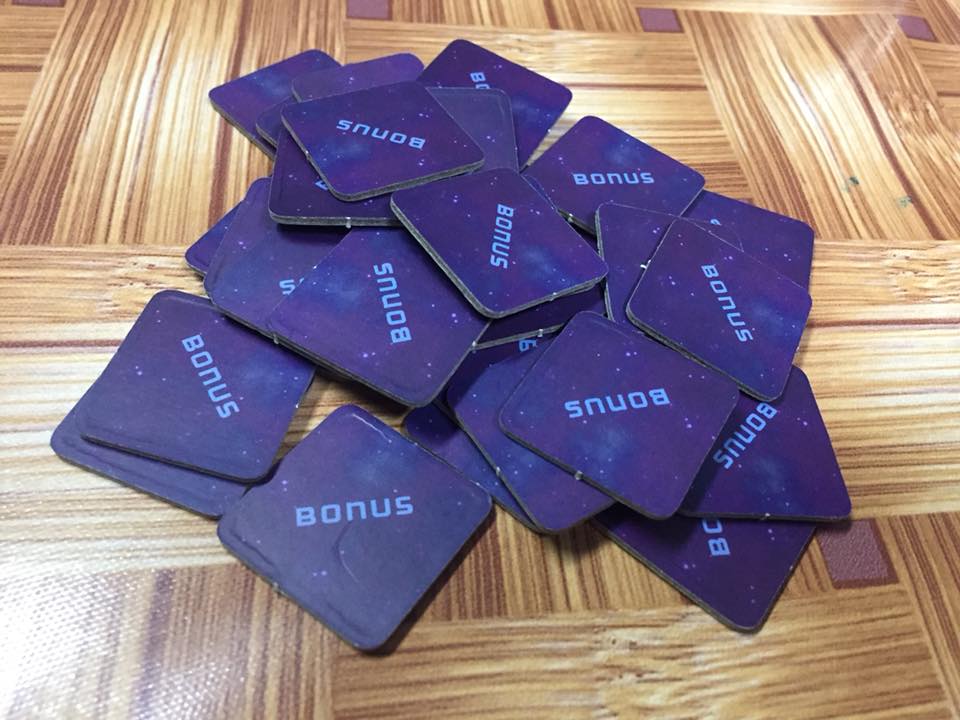 Shuffle and put face down all the bonus tokens. Alternatively, you can use a draw bag. 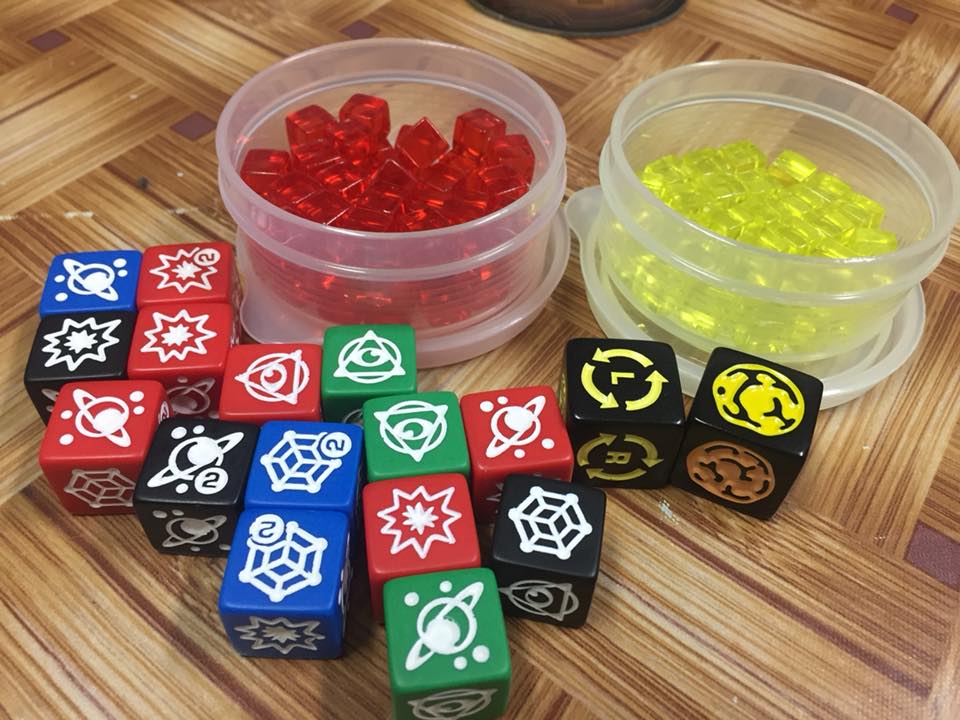 Keep all damage and tracking cubes, as well as the dice within easy reach. 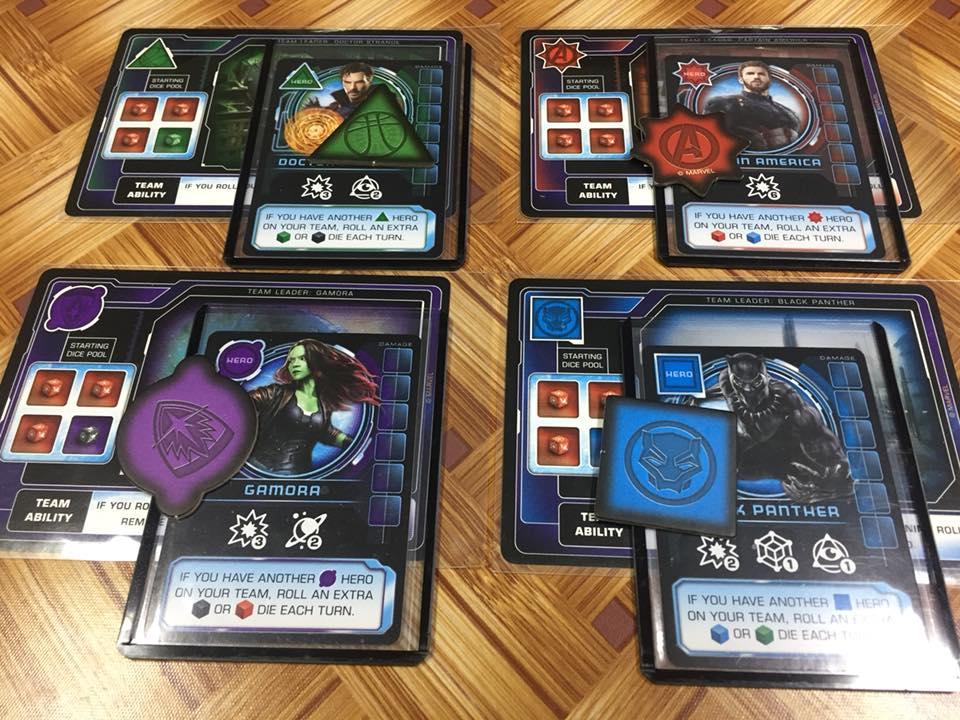 Finally, choose a starting character (Gamora, Black Panther, Dr. Strange, Captain America) and get their appropriate deployment token and base of operations. Choose a starting player and you can now play the game! 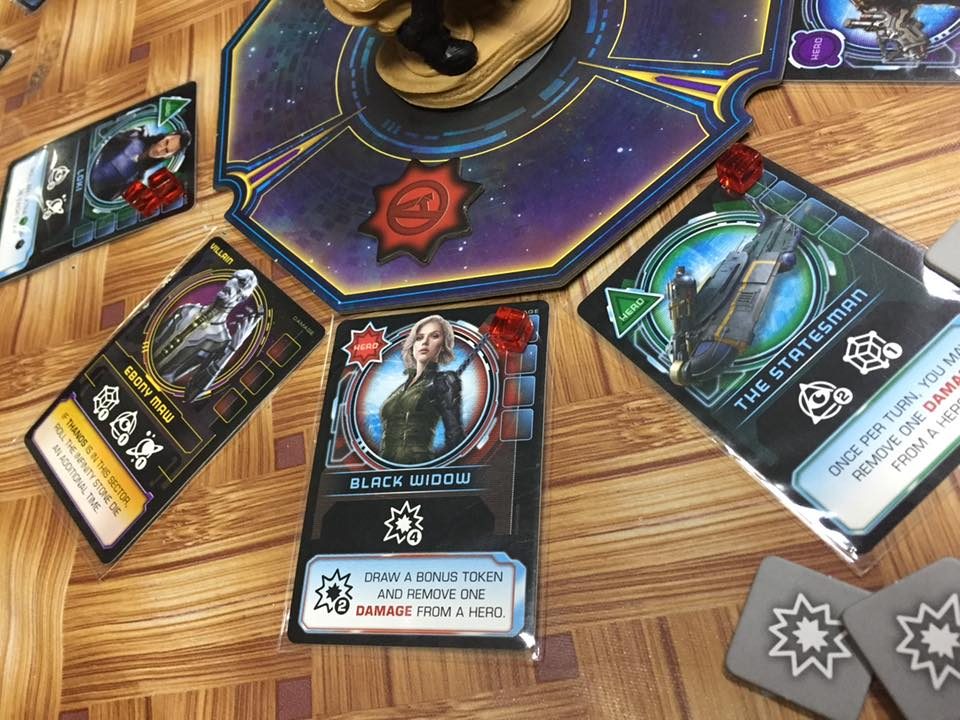 Flow of the Game

On your turn the first thing you will do is place your deployment token on one of the three sectors in the board. This indicates that you have an intention of doing something in that area which is basically two things – Recruit and/or damage a villain. Simple right?

Well… Thing is before you get to act or actually do anything useful, Thanos gets to make his move first. And you do that via these 2 dice – one for progression of the gauntlet and another for his movement. You see, Thanos starts the game facing a random sector on the board, depending on the die he gets to move or stay in place. Regardless where he ends up he gets to “damage” all heroes in that sector, including all of your heroes in the event you deployed in that sector. Nasty huh? To make matters even worse, every villain in that sector get to activate as well for additional damage, yikes! So planning your deployment is crucial, because you will always consider the Mad Titan’s movement every turn!

When that is resolved, the active player finally gets to make his move! At the start of your turn, collect all available dice from your pool (indicated on your player card). There are 4 types of symbols that you should be aware of for your heroes and power dice – Battle (Red), Tech (Blue), Mystic (Green) and Cosmic (Black). One of the four starting heroes usually have a trait and specific starting die that is naturally inherent to them for example, Gamora is a Cosmic type while Dr. Strange is a Mystic hero.

Why does this matter? While all dice can give all the symbols that you need, some of them specialize in a particular trait as seen on the chart above. So you can expect to see a lot of tech rolls with the blue dice. 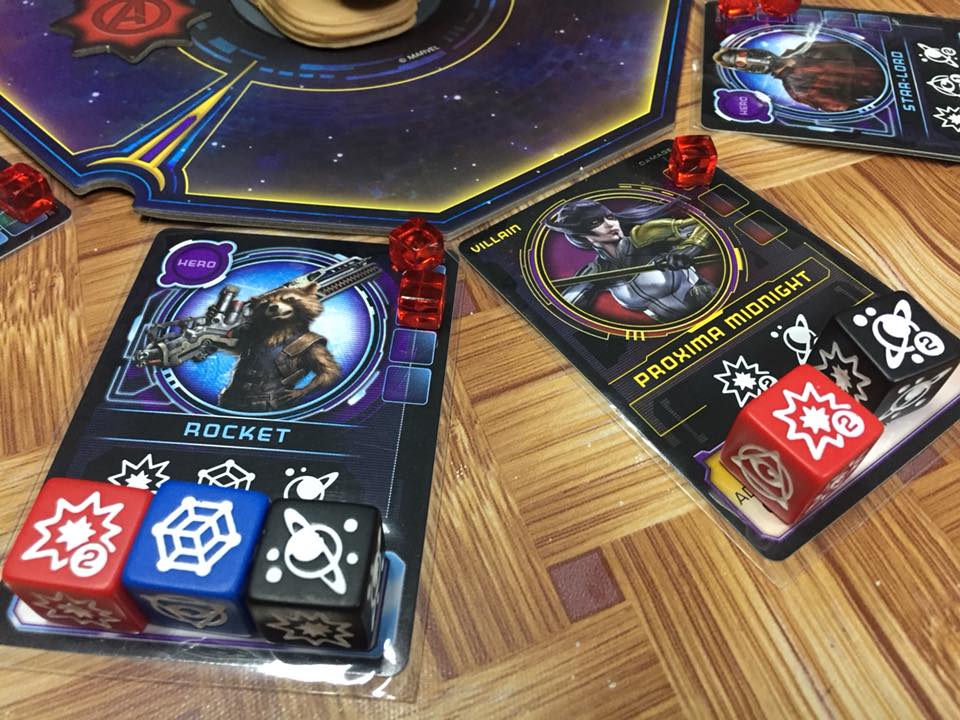 Once you gathered all your dice then its time to roll! Similar to games such as Elder Sign and King of Tokyo, the bulk of the gameplay in Thanos Rising is all about matching dice to the cards (which are shown in the middle) – either to recruit heroes or attack villains.

For each and every roll, you get to assign as many dice as you can to one of the Asset Cards in your sector. After that, the dice remaining in your pool can then be re-rolled again, possibly assigning it to the same card or a different one.

Once all the dice have been assigned (or you may have some left but futile to use), your turn is over and you get to recruit heroes or damage villains if you have completely matched all the symbols in the associated card. 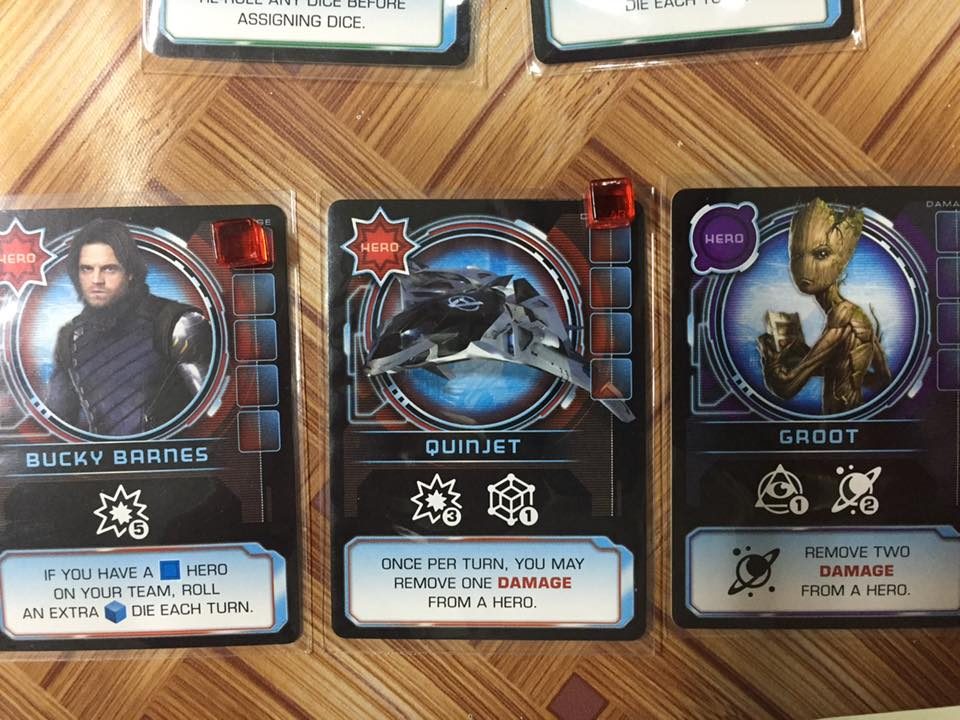 One good thing about recruiting heroes is that, aside from the fact that it can possibly strengthen your team by granting you additional dice and powerful abilities – you also get to fully heal them when they join your roster! Our group always gets a kick out of the moment when a certain hero is on the brink of being KO’ed, only to be saved by a miracle play. Believe me, a lot of these “close call” die rolls happen all the time. It always feels great when you save someone, right? 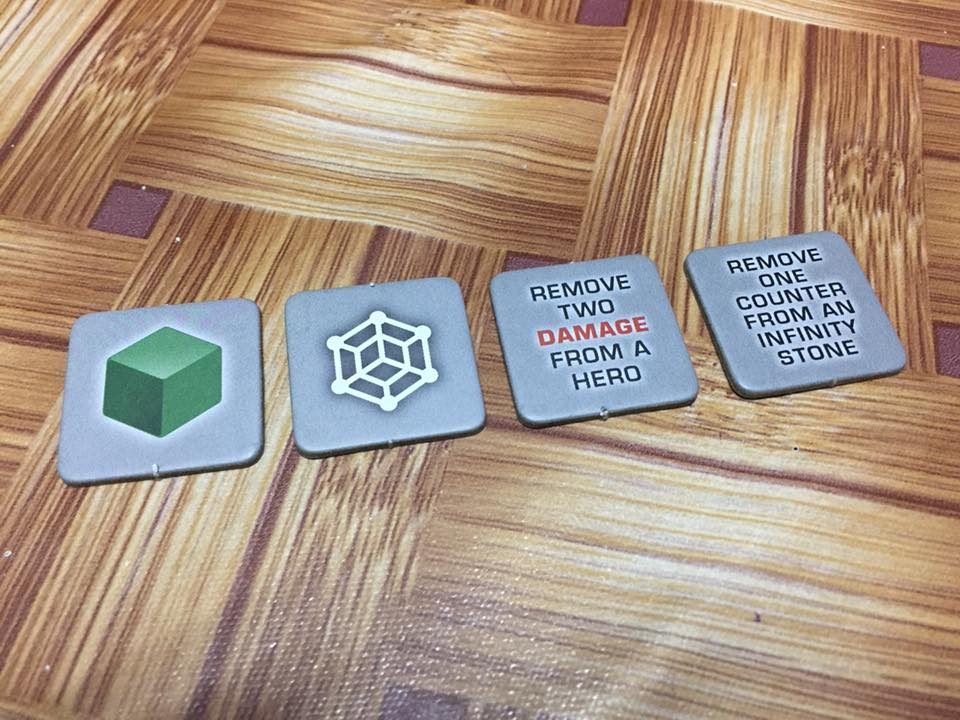 Damaging villains on the other hand gets you these useful “bonus tokens” which you can use at anytime, even on your teammates turn. These range from granting specific symbols, providing additional dice, healing heroes or prolonging the progress of the gauntlet.

So that is basically how a turn works – You deploy your token, Thanos makes his move on a sector then the active players gets to roll and match dice to recruit and/or damage foes. As simple as the mechanic sounds, the game still can lead to a lot of decision-making with your game group, primarily on where to go or whether the situation calls for recruiting/saving a hero or defeating a villain. 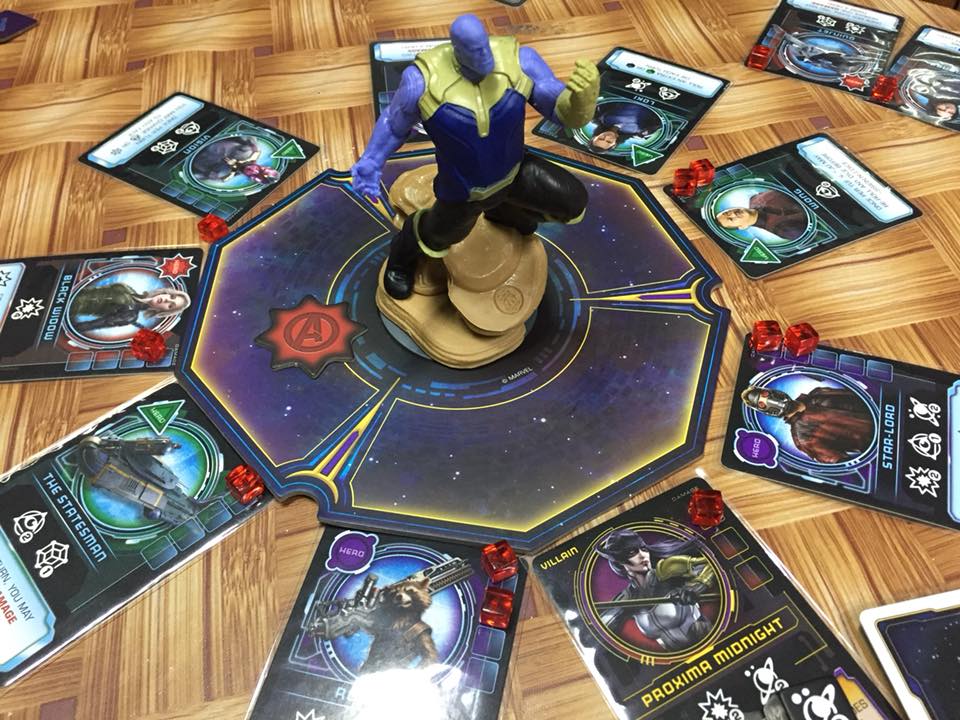 For those who think that the game is purely luck-driven because of the dice, well yes that is true but there are ways to work around it and push the odds in your favor. For me I think the real challenge hear lies on the initial shuffle of the asset deck. The distribution of the heroes and villains in all three sectors is EVERYTHING in this game. Depending on the board layout you can have games that swing very hard at the start, clawing your way each and every turn until you build up your team… Or the other way around where there are almost no villains at the beginning, until that point where you get swarmed later in the game.

Surprisingly, and this came up more than once… There were also many games where it really came down the line and it could be anybody’s ball game. I will always remember my second play-through where there was only one more villain to beat for us to win and Thanos only needed to get one more gem (Time Stone). In the deciding turn, after Dr. Strange made his deployment move and ready to take the win… Thanos rolled his two dice and snap! He got his last infinity stone. Everyone shouted at the table as we lost but honestly – and I can speak for the rest of my group that even though we were defeated in the most grandest way possible, we wouldn’t have had it any other way. 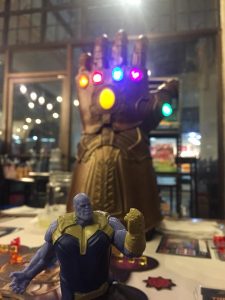 To sum it all up, We genuinely had fun. 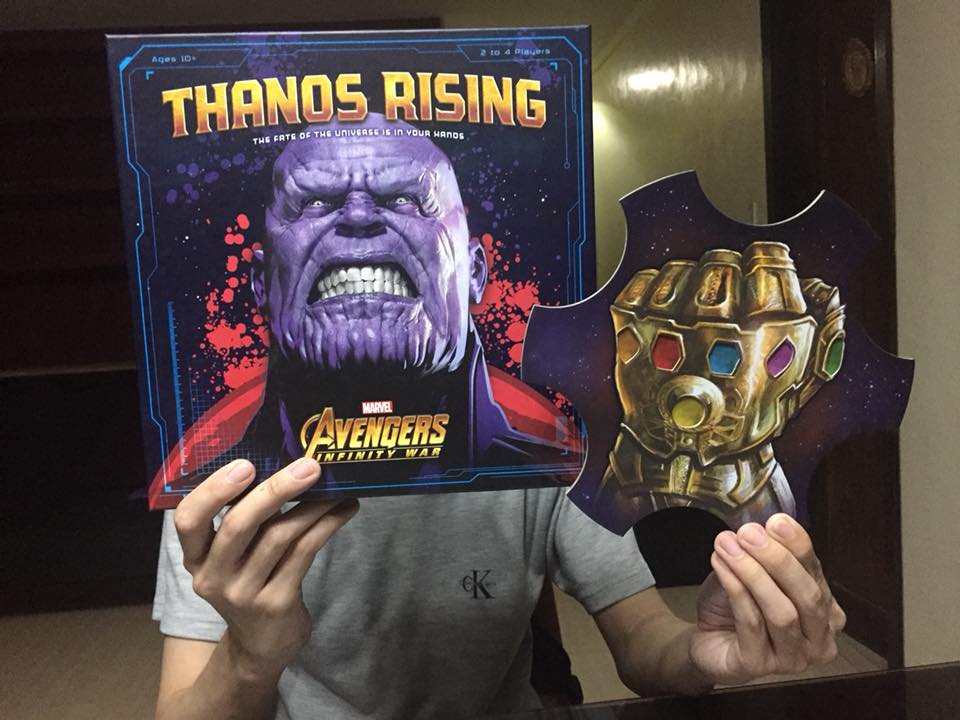 A good, solid cooperative game for everyone that can be used as a gateway into our wonderful hobby involving cardboard. We came in with low expectations but it all disintegrated into the air when we saw everyone (even in losing) had a Marvel of a time at the table. Get it.

A good, solid cooperative game for everyone that can be used as a gateway into our wonderful hobby involving cardboard. We came in with low expectations but it all disintegrated into the air when we saw everyone (even in losing) had a Marvel of a time at the table. Get it.Thanos Rising: Avengers Infinity War Review | This Time... Everyone Dice