Who would've thought a spin-off can become the best in a series? 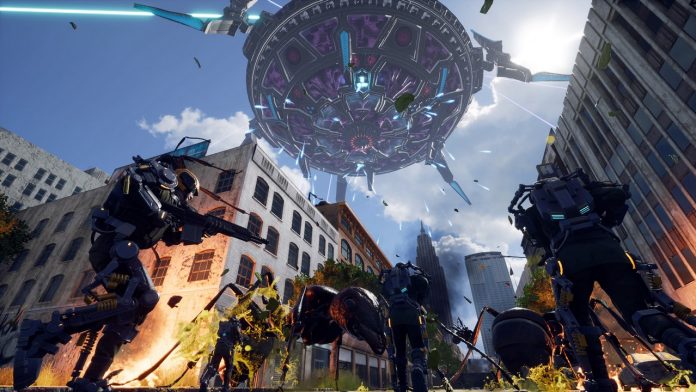 Last year, we got to try Earth Defense Force 5, but unfortunately the outdated graphics and rather uninspired writing gave it a very outdated feel for a game that came out on 2018. So who would expect that we will get a new EDF game this early?

Just like the other titles from the series EDF: Iron Rain story is rather simple and straightforward. As soon as you start your very first mission, the city is already under attacked by extraterrestrial beings called the “Aggressor.” These enemies have with them hordes of gigantic Ants, coupled with a super-powered mothership called “Hivecraft” which down powerful attacks from above as it lay waste on the city.

You end up as the last remaining survivor of your squad entrusted with a new energy core that will allow you to fight back the alien invaders and bring down the Hivecraft. Unfortunately, after the huge battle you ended up beneath the rubles of the ship; when you come to, you find yourself waking up 7 years from a coma. Worst of all, you learn that the whole planet is still under siege. 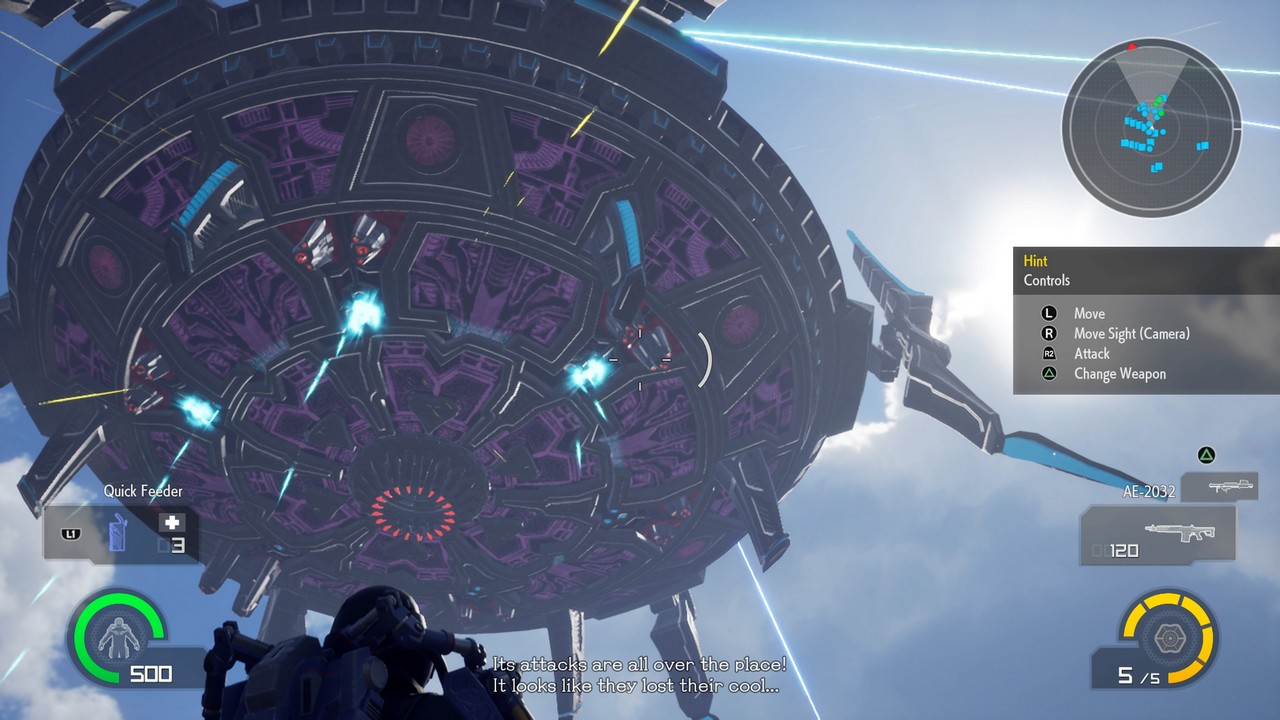 So you still have your basic story of “aliens invades Earth you are one of its last defenses“, but what makes EDF: Iron Rain’s story different from the other titles is that there is actually a lot more going on as you follow the storyline. Plus, you can learn more about the characters inside the game (compared to the other titles). The story is easy to miss though, as you have to follow each characters dialogue while you’re busy dealing with alient pests that keep on spawning around the map. 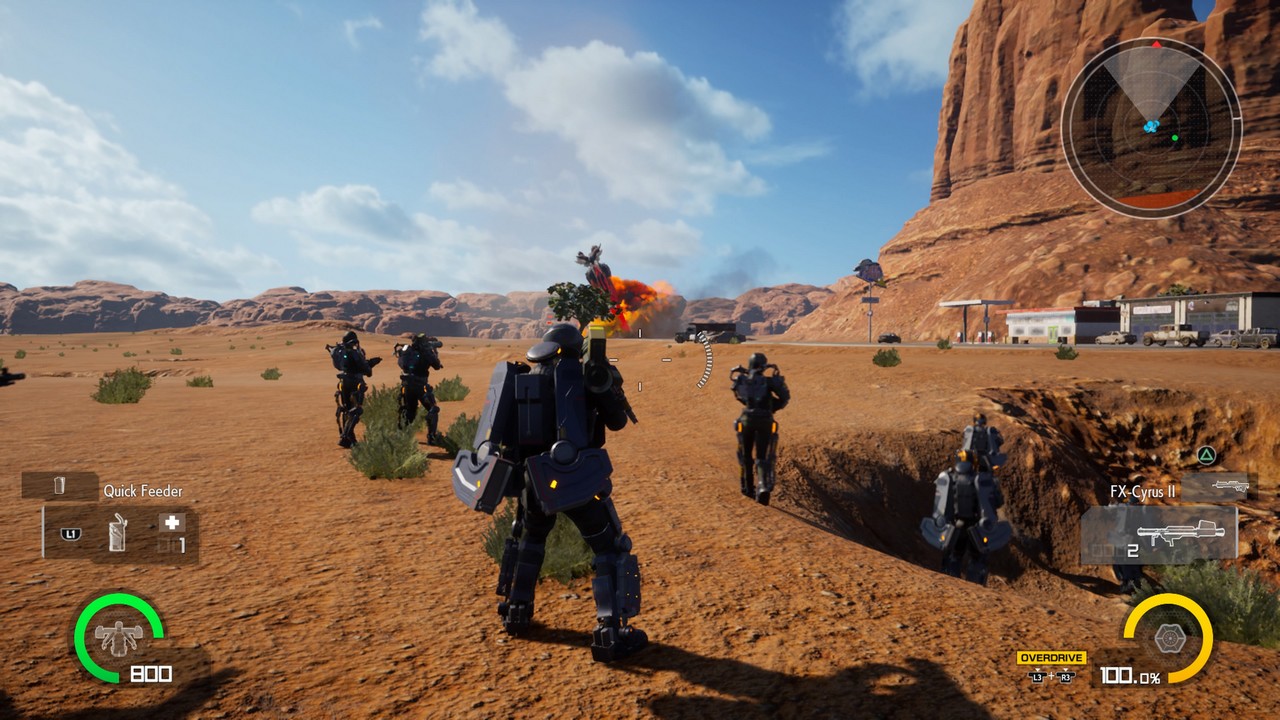 EDF: Iron Rain was a huge improvement in the graphics department thanks to Unreal Engine 4. Characters look good, the bugs and creatures are more realistic (also creepier), and the environment is now more detailed. Though some assets still take time to load, especially in the shop. While the game can sometimes still give off a ‘PS2 game’ vibe, Iron Rain is still the best looking EDF game as of now.

While the graphics took a huge improvement, EDF: Iron Rain’s gameplay did not really innovate from the other EDF titles. It’s still the same destroy all Ants, Drones, Mechs, other Bugs, and Kaijus. But to make things interesting, you won’t be fighting boring Ants for too long. Iron Rain is quick to introduce bigger and better enemies early on, keeping the experience fresh. Not only that, every time you finish a mission, new items, vehicles, and weapons are unlocked immediately which you can purchase through the in-game shop.

The bummer is that “everything” is unlocked through purchase using the easy-to-miss in-game currency, so you have to keep on doing missions and harvest resources just to get your desired weapon or item. Also try to look around for some lost drones as they can net you some goodies.

One of the fun things that you can do in Iron Rain is the character creation. You can style your ideal soldier based on your preference without getting worried about last second change-of-thoughts as the character creation is always available. So you can always mess around and create an abomination of a character without having it become permanent. The co-op and pvp game modes also make a comeback, making the gameplay even more fun with friends.

Voice acting is improved in this game over other EDF titles, but they could still do more. Switching to the Japanese voice-over is still the best option, especially if you are part of the Exoskeleton Soldier Kaiju Fighting Task Force.

Earth Defense Force is a series known for it’s senseless action with little changes to its core gameplay between every new release, so you can expect most of the same thing from EDF: Iron Rain’s gameplay. Though Iron Rain does manage to keep the experience fresh by introducing new content as early as possible, all while looking prettier than the previous games to boot. The game did not feel that outdated, though the voice acting can use some improvement. Plus, penalties on using health items make farming more difficult. Despite being as repetitive as it is, Earth Defense Force: Iron Rain is still a good game to try out if you love some mindless shooting action.

EDF: Iron Rain refuses to abandon the same formula that the series is known about. But EDF: Iron Rain managed to hit some points by making small changes a huge factor and giving it a fresh take on the same old formula, though some might still find it repetitive. Highly recommended to play with friends regardless if you are familiar or not to the series. Earth Defense Force: Iron Rain Review | The best in the series