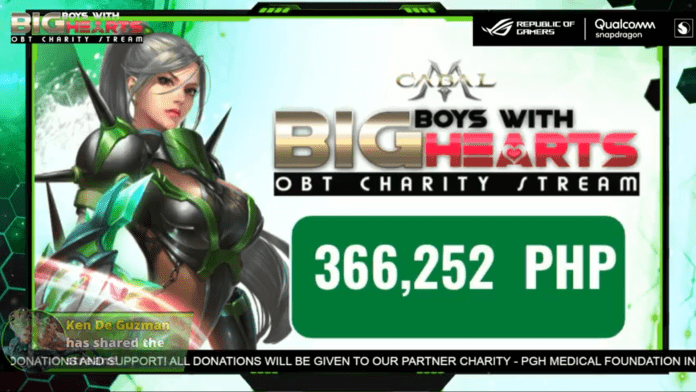 The community was able to raise more than Php 300,000 during Cabal Mobile’s  Charity Stream event last August. PlayPark, on their part, matched and raised the amount and covered more than Php 700,000 to reach over one million pesos. The amount was duly turned over to the Philippine General Hospital Medical Foundation Inc., along with several other charitable institutions that offer services to our COVID-19 affected countrymen. All the beneficiaries were notified of their respective donations ahead of time, and all safety precautions were observed prior, during, and after the turnovers were conducted during the month of September.

“In behalf of our kababayans affected by Covid19, taos puso akong nagpapasalamat sa lahat ng nagbigay ng tulong. Our community’s willingness and heart for sharing are beams of light in the midst of the pandemic,” said Apollo Dionglay, Managing Director for PlayPark Philippines.

The caring and sharing do not end there, however. As Christmas is coming up, so is a beloved PlayPark tradition: the PlayPark Xtreme Paskuhan or PPXP! Expect a lot of tournaments, raffles, and a great Christmas party to spread a little cheer from the PlayPark family. In the spirit of the holiday season, another donation drive is planned to share the blessings we all had to our less fortunate sisters and brothers who have been greatly affected by the pandemic.

PlayPark Inc. hosts a wide variety of PC and mobile games on its site, ready for download and playing. Aside from the massively popular Cabal Mobile, PlayPark also offers other games like Club Audition Mobile, Cabal, RF Online, and others.