Dungeon Encounters Review | A Straightforward JRPG with no Fluff

Simply a game about encounters in a dungeon. 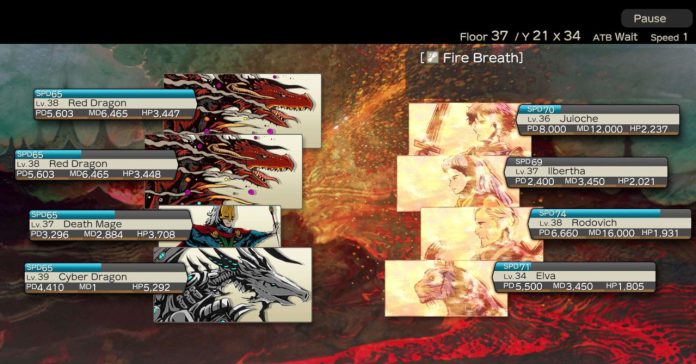 Dungeon Encounters, a Square Enix game, is a dungeon crawling, JPRG game set in a world where there isn’t much of storytelling, not much visuals, and overall has very little going on. Using tile based maps and an active time bar system in combat. Dungeon Encounters is a typical RPG where your party of four are adventuring in a dungeon labyrinth that mysteriously appeared underneath the academy. 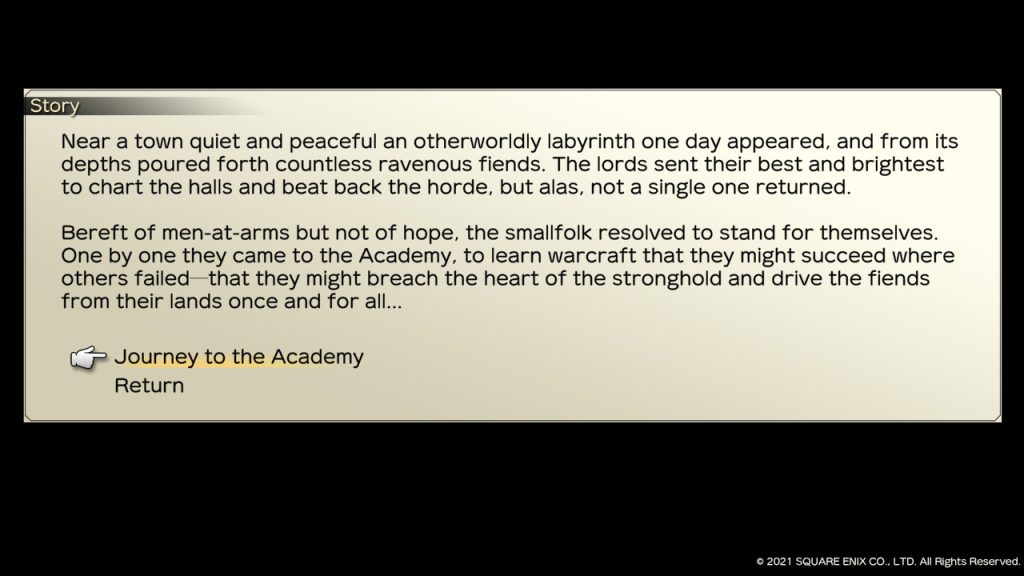 The game has a very minimalist approach, starting with a two-paragraph story introduction which basically summarizes the whole story. The game wastes very little time of your time in getting you down to business, which is you going down into its numerous levels of mazes to explore, fight monsters, find treasure & other items, and rescue your mates. It looks and feels very much like playing a board game as you trudge through its 99 dungeon levels.

Its austere presentation makes this game suitable for the Nintendo Switch platform, specifically on mobile mode where you get to play the game during work or school break and then save and exit. “Simplicity is beauty” as the saying goes, and this game is straightforwardly direct, but can it be said that it is beautiful? 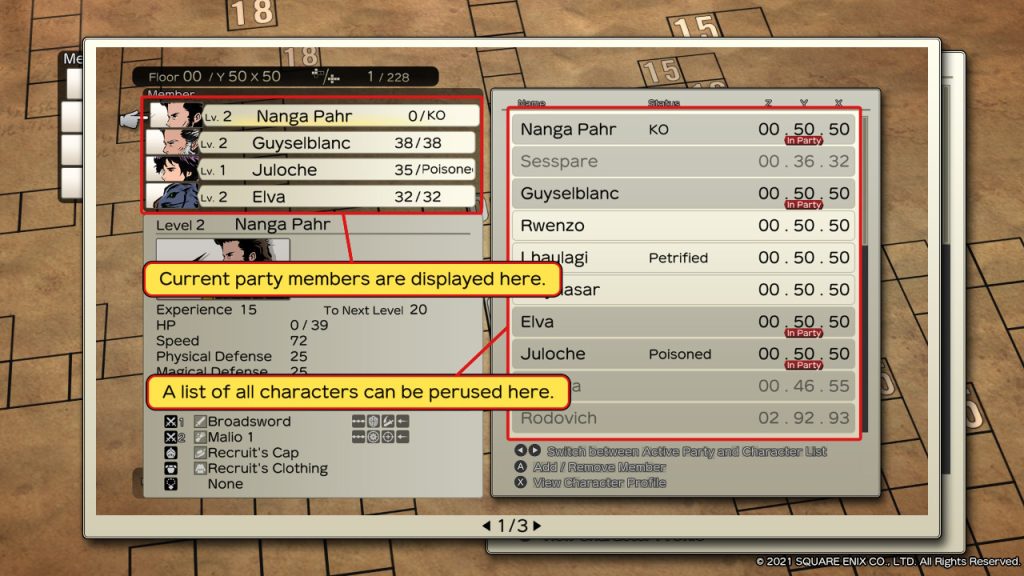 Let’s begin with combat, previously I said that it uses the classic Active Time Bar system (ATB) which dictates turn order on when a character or monster can take action. Character actions are either an attack or using one of the various abilities you have collected for your party. The way combat works is that physical attacks hit and reduce physical defense while magical attacks hit and reduces magical defense — simple and logical.  Once the physical defense has been reduced to zero, then the next physical attack, when it hits, will reduce the HP of the character or monster.

The same principle applies to magical attack once the magical defense of the target has been reduced to zero. Of course there are ways where the attack bypasses the defense stat of the target and directly reduces the HP.  Alongside the option of attacking during a combat encounter, you can also use the abilities you have acquired. Abilities vary from healing, buffing, and/or resurrecting your party members as well as fleeing combat among others.

Every character also has two weapon slots, head gear, armor, and an accessory. During a fight, every character and monster has two defense types (physical and magical defense) and a health bar.

The difficulty of the monsters you face depends on the level you’re on which is fair, although early in the game I encountered the (FC) Treasure Hunter, and that encounter really hurts and it’s not because its defense and HP are more than 20 times than that of my characters, but it’s because it literally hurts you financially. I suddenly found myself in in-game financial debt. It’s really punishing for not realizing a pointless encounter so early in game. 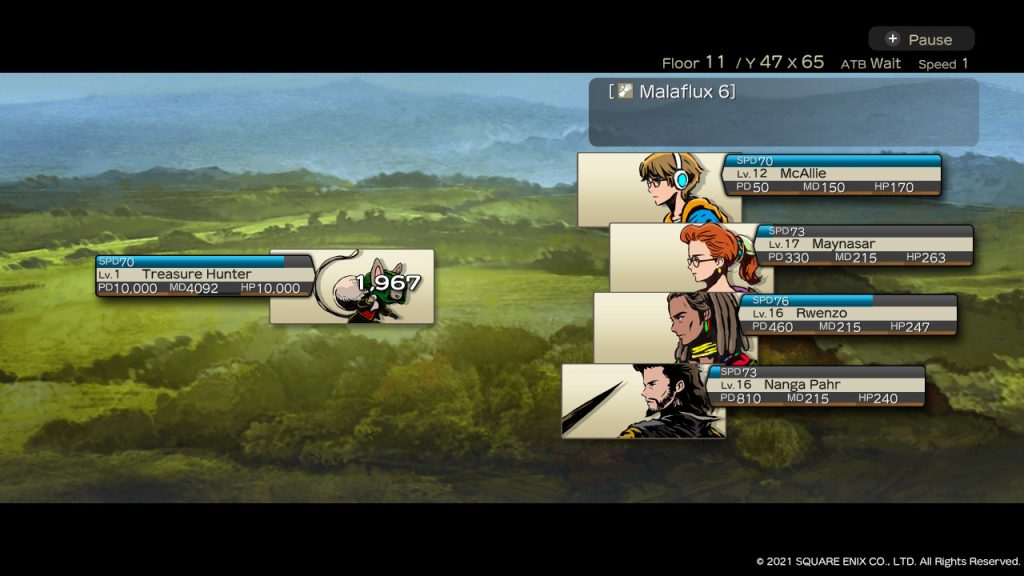 For the exploration part, the games uses a bunch of squares lined up in various branching fixed patters that serves as pathways from getting from one area to another as you venture forth and descend to the lower levels of the labyrinth. Locations of interests are marked by a combination of two digit numbers and or letters in white. These white digit locations vary from stations to shops to stairs and some of them among many others are math puzzles. The numbers on the white digits represent what they are such as “06” represents the Healing Station where you can have your party fully healed. Meanwhile, “03” represents the Ability Station where you can add or remove abilities that your party is using based on the abilities you have collected thus far. The black digits however, are the enemy encounters that you may choose to step on to engage in combat. The overall map look changes every 10 levels, and every ten levels there is a teleporter that can send your party back up to town. 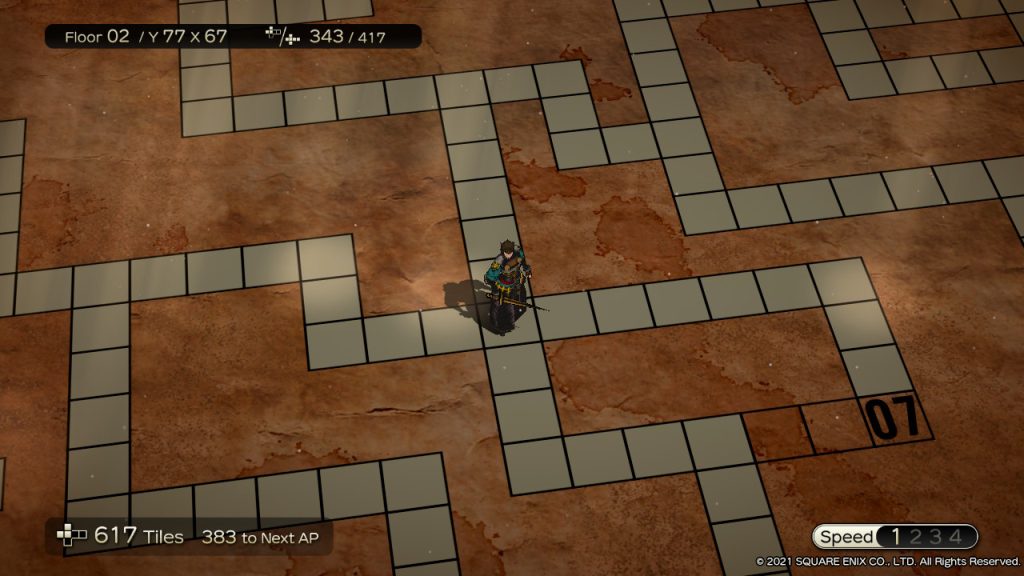 There are also map based abilities you can use while exploring which vary from randomly teleporting to an explored square on the same level, to creating a staircase up or down a level if the square you are on is directly on top or bottom of another explored square one level lower or higher. Abilities are categorized as either passive or active abilities. Gaining abilities is easy enough, you just have to collect them by exploring the map and visit the all the white digit numbers. The amount of abilities you can equip will depend of your ability points and gaining ability point is simple, you just have to explore the map stepping and collecting the unexplored squares as you move through the map.

In terms of strategy, the game is pretty transparent where you are able to plan where to go and how you can avoid enemy encounters. Monsters in the dungeon don’t normally roam around the map and there are no random encounters although there will be some unavoidable fights you will have to face since they are blocking your path going to the next level, but thankfully, that’s where the withdraw ability comes in where you can run away from combat.

What’s engaging about the game is actually the lack of an over-arching story. A typical JPRG would have you read through a mandatory text block of lore, and often times have you engage with the game’s non playable characters and scroll through paragraphs of dialogue where sometimes you just want to skip. But in these games, you sort of can’t because you need the information or clues you will get from that conversation to proceed with your adventure to know how to solve a puzzle or where to go to next.

Dungeon Encounters does away with that by simply removing those kind of interaction. It does away with all the tedious storytelling and just prioritizes on gameplay. Its minimalist aesthetics creates less amount of distraction, making it easier for you to focus on strategizing on tackling the challenges you face as you descend further into the dungeon, the game is naturally a number cruncher

If you want to play a JRPG game simply for playing the game and engaging with its gameplay mechanics without all the delays of pressing the skip button whenever a block of text would come up, this one if for you. But for most fans of the JRPG genre, this may not be for you.

Dungeon Encounters was reviewed on Nintendo Switch via a copy provided by the publisher.

Previous article
Netflix announces Resident Evil live action series cast and release date
Next article
Samsung launches the Galaxy A33 5G, A53 5G, and A73 5G in the Philippines

Dungeon Encounters is what you get when you take solid JRPG combat and overall gameplay, but without lengthy dialogue and colorful visuals. If you want a JRPG simply for gameplay, this is a solid buy, but it might not be for RPG fans who want more in terms of story and visuals. Dungeon Encounters Review | A Straightforward JRPG with no Fluff