Vintage Magic: The Gathering cards will be randomly seeded in their upcoming set, Dominaria United

How's that for a throwback? How’s that for a throwback?

In celebration of Magic: The Gathering’s 30th anniversary, Wizards of the Coast looks to showcase one of the most popular collectible card games in a really big way.

First off, it is returning back to it’s roots to a plane called Dominaria to tell a multi-story arc that will continue in The Brother’s War, highlighting the feud between Urza and Mishra, that will continue on at least a few more sets.

But before we get ahead of ourselves let’s get back to Dominara, the first plane that started off Magic: The Gathering’s storyline way back in the early 90’s. The next set, called Dominaria United will definitely see some familiar faces making its return including the Planeswalkers Jaya and Karn and the time-travelling Teferi. Some lesser-known legendary heroes are also getting a modern makeover in the set in what they announced as Legends Retold.

What’s probably the biggest announcement coming from the set is from what they call “Lost Legends”. Once again, they are looking to include or seed some vintage cards specifically from their “Legends” set back in 1994 and putting it into Dominaria United, similar to what they did with Zendikar back in 2009.

According to Magic: The Gathering’s stream, Marshall Sutcliffe and Matther Danner told of how their team discovered a ton of unopened Legends booster boxes in a warehouse in Washington State. With a bunch of people wearing gloves, they carefully unpacked a lot of these wonderful finds and include them in the next expansion. The catch is though, according to the host Blake Rasmussen, he mentioned that Lost Legends cards would only be available in “3%” of collector’s booster packs, their most expensive sealed product line. 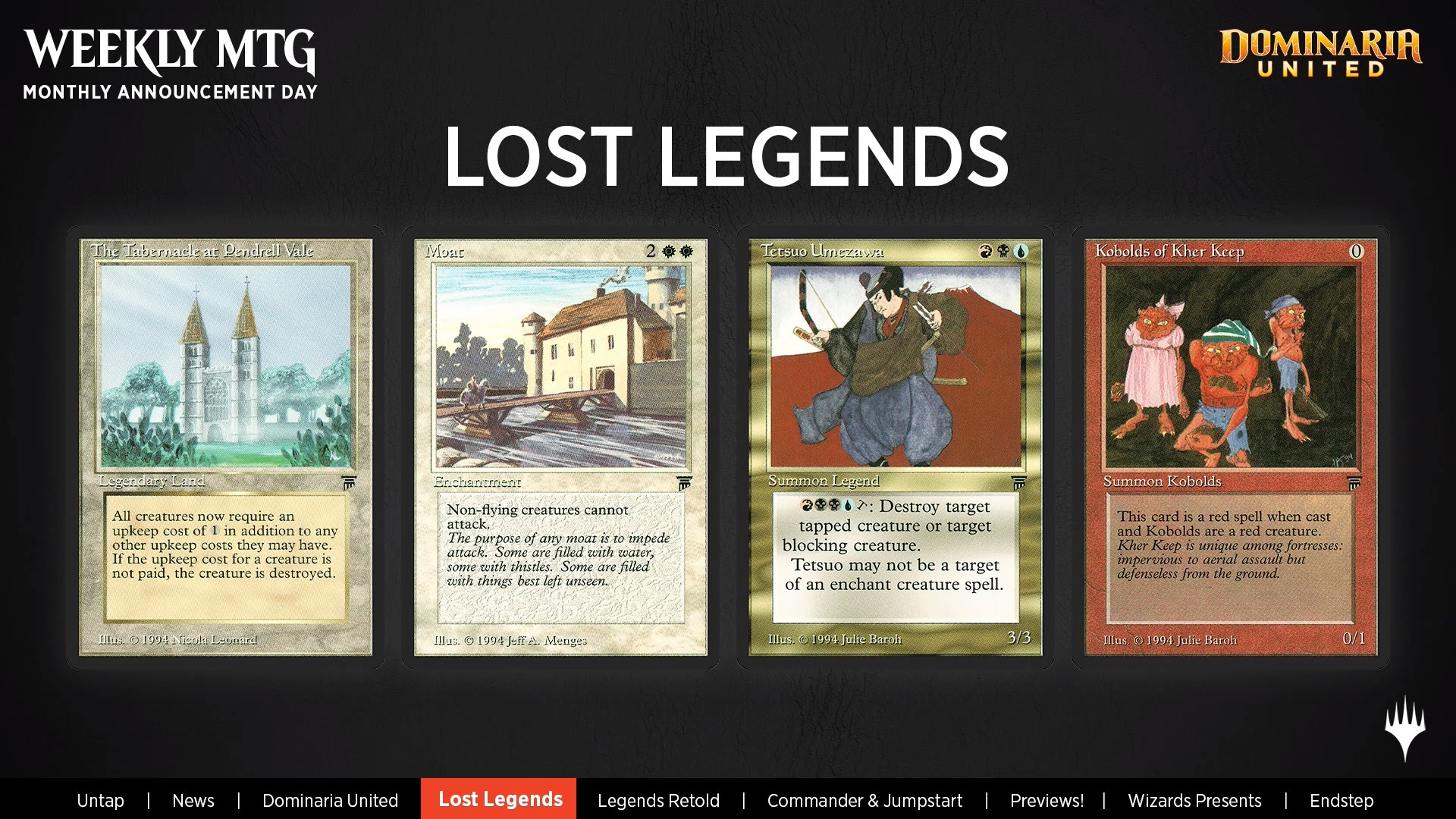 By the name alone, you know that the Legends set is filled to with bring with some heavy hitters like the OG printing of the elder dragon Nicol Bolas and Tetsuo Umezawa, but perhaps the spiciest and most desirable vintage card that you want to acquire in the set is The Tabernacle at Pendrell Vale (pictured left), which puts creatures in check with an upkeep cost.

As of this writing, The Tabernacle costs a hefty $5000 in the secondary market, being a reserved list card and all. Adding to the hype, I would also like to remind that this is also a rare chance that you can get these Legends cards in near-mint condition as they are essentially considered pack-fresh or in this case, warehouse-fresh.

Spoiler season for Dominaria United will start around mid-August, with the set officially releasing September 9, 2022. Be sure to check back here for anything Magic: The Gathering, as they seem to be setting things up in motion for something awesome for all of us card-chuckers!